Would you llike to come rambling again ,

If  the answer is yes ,then off we go. We had to travel to Salisbury in  Wiltshire as  I had a hospital  appointment for my back  ,which was very informative.  Have to go back in  4-6 months after  having  some manual  phsyiotherapy which I am  waiting  an appointment for.  So we set off early for my 11a.m  appointment  ,we arrived about 5  mins late as  we  got  lost on  the way . Martin  asked if  I wanted to go straight home  to which I  replied  no  I would like to see the  Cathedral.  We found the park  and ride into   the city centre  and because we  are old we  have bus passes so  it  did not  cost us anything .   I  wonder  if it  will be stopped in time by the government. So here is the view of  the Cathedral. 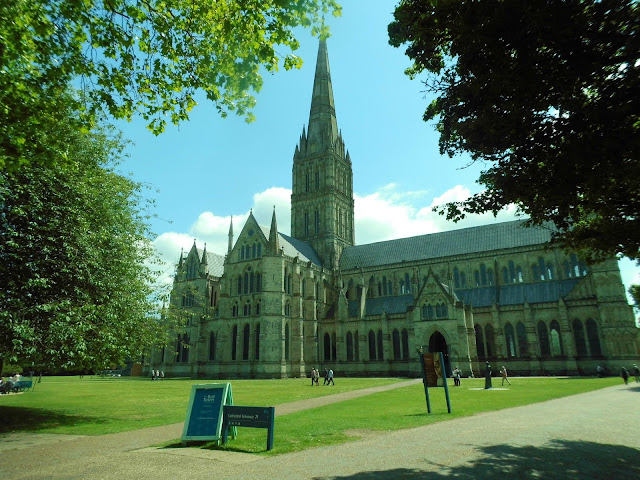 I love this place, we have been a few times over the years. It never ceases to amaze me the workmanship .  We
thought we would visit a National Trust  property which was very near here and sit  in the garden and have  lunch.
The  place was Mompesson House,  we could sit in  the gardens for £1 each which we thought by NT standards it was not too bad , evidently if  we wanted to see round the house  it would have  been more.
I took  a few pictures so you could see. 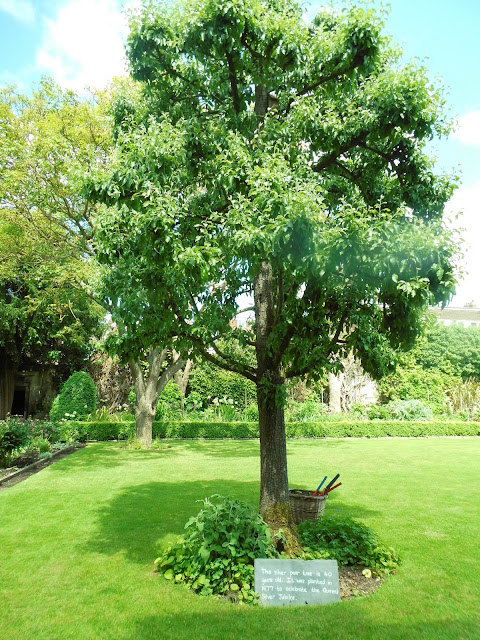 The pear tree was planted to commemerate the Queens Silver Jubilee in 1977. We sat in the garden and had cake or I did and Martin  had a  date  and walnut cake  without egg. 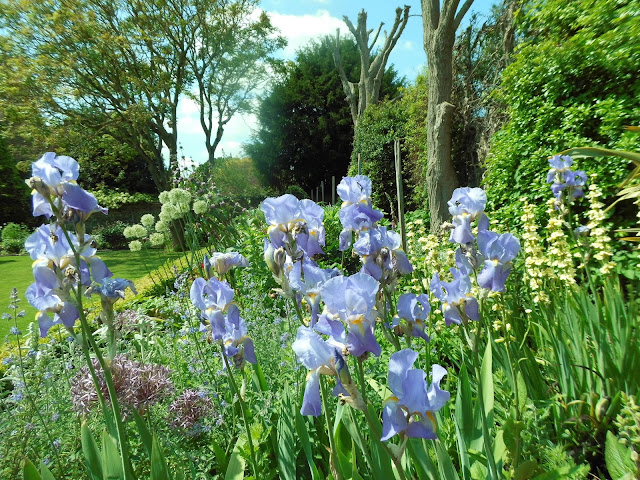 This was the view from  where we sat. The scent of these Irises was so lovely. At the end of this border was the  privvy ,which made us smile. 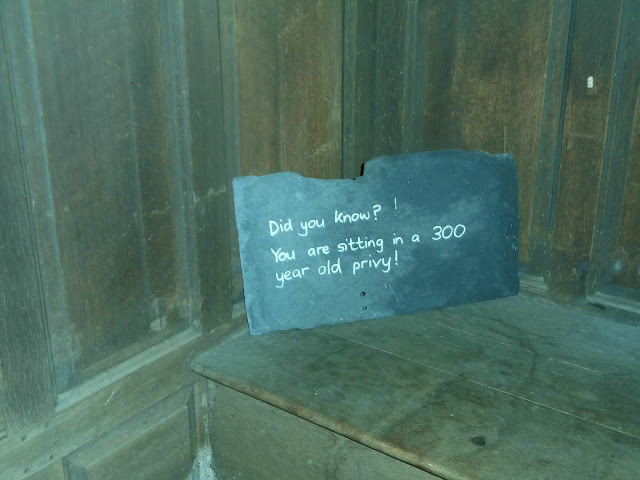 Bums on seats perhaps.Then looking toward the house. 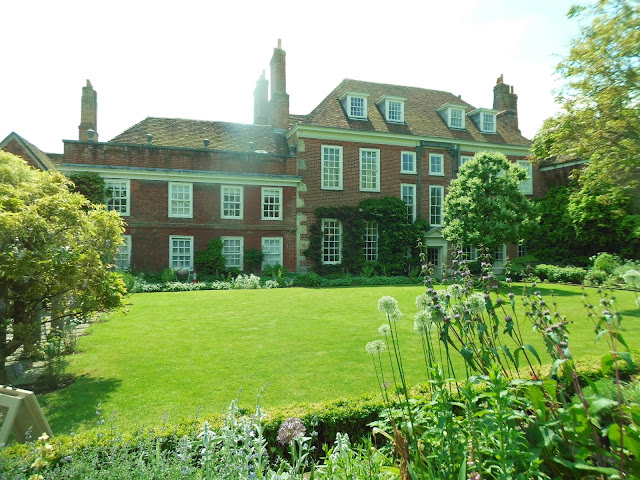 We  sat for a while in the sunshine and it was quite a suntrap.This  was the  tea room. 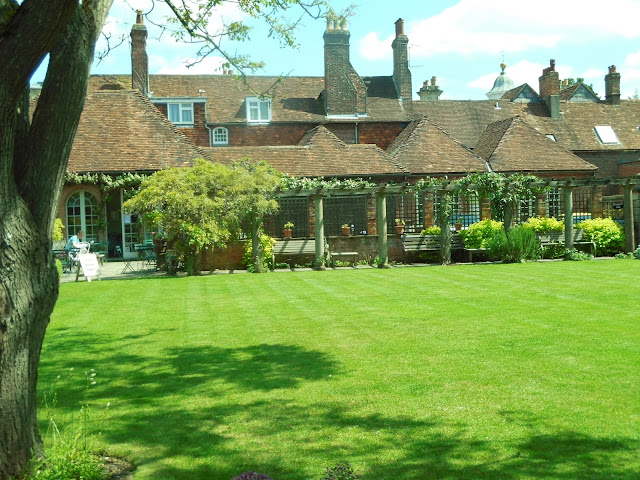 A wander round the garden. 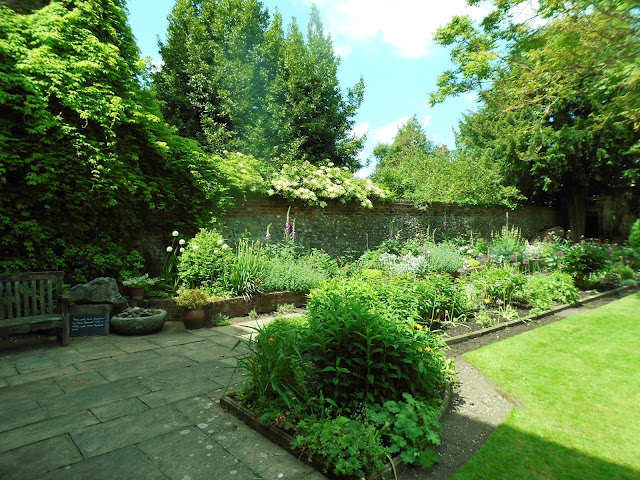 It  was quite nice to find a shady spot after walking round the garden. 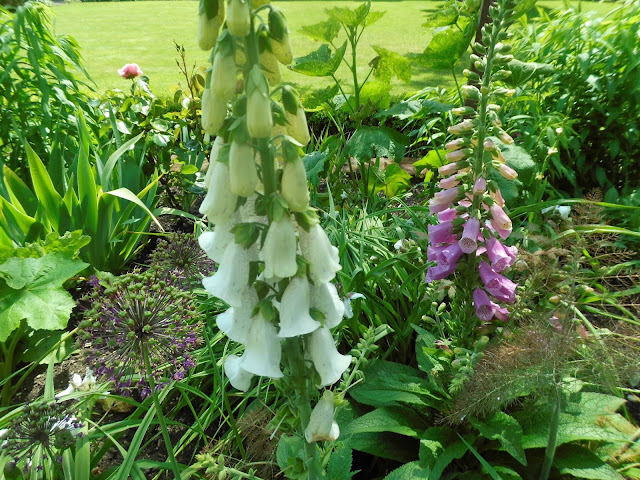 I am a lover of foxgloves,we had some in our garden but this year so  far I have only seen one. These aliums were quite striking but we did see  some  better ones the next week which I will show you later. 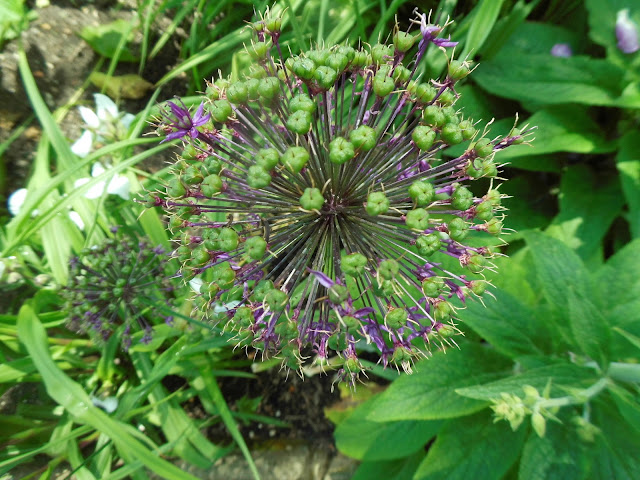 So fed and watered  we wandered over to the Cathedral. 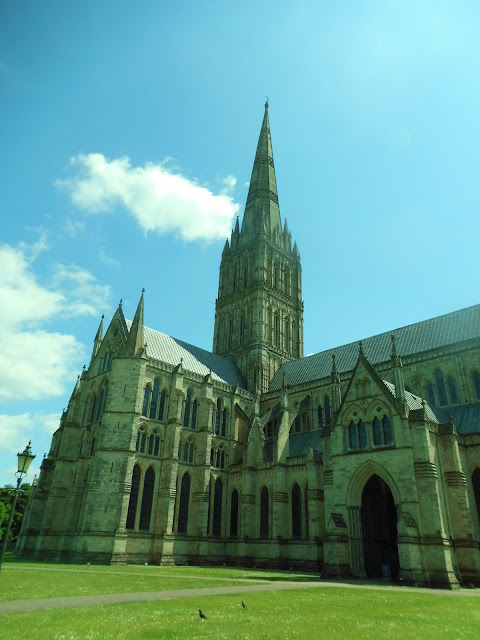 We did  not  go inside  this  time just in  the Cloisters, how about this for carving. 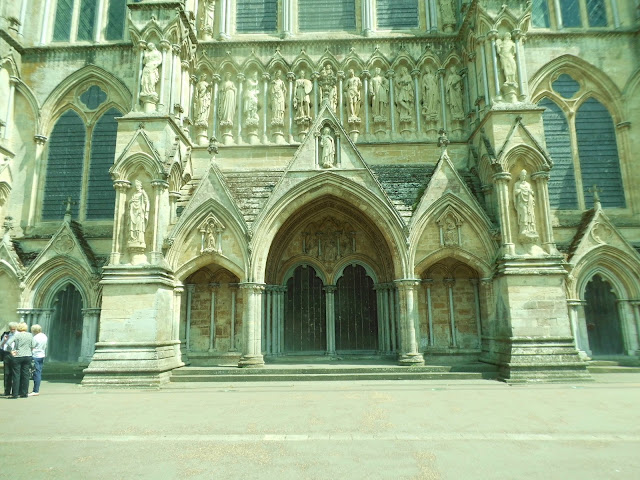 I  was  waiting  for  the 3 people to  move  but I  think  they were so  deep in conversation  they weren't  going  to  .I  think the Cathedral  has had a facelift clean recently so it certainly looked good. 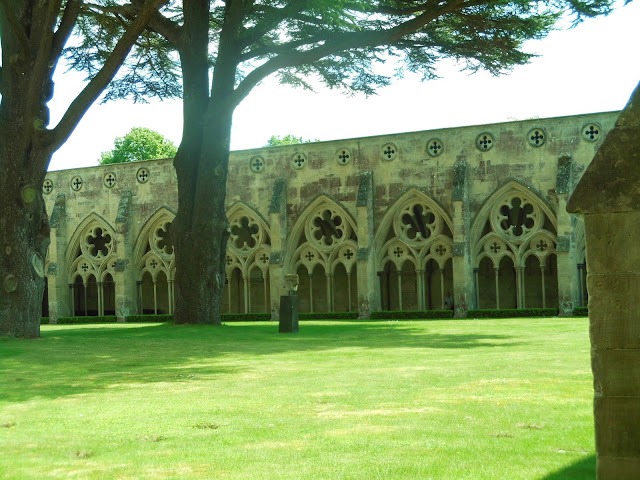 This  was a view of the cloisters and   the roof. 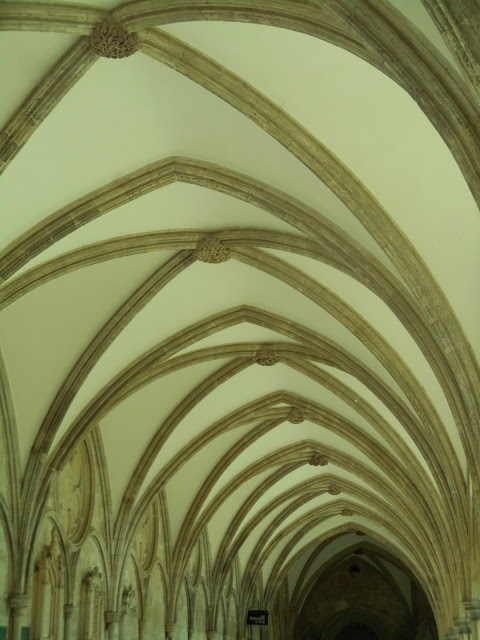 The resident  stonemason   chipping away. 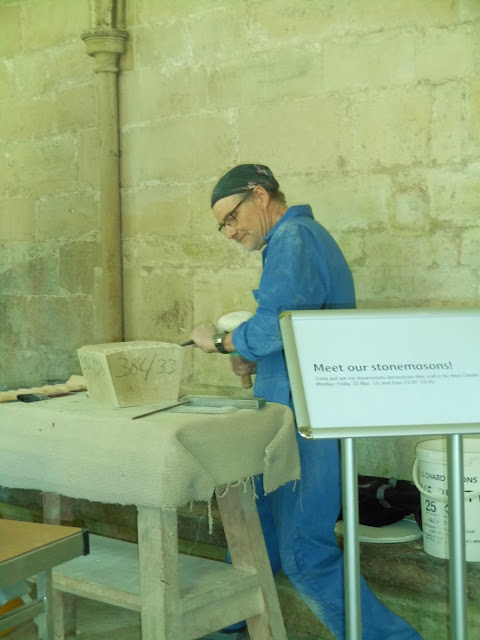 I  wonder  when this  was built how many stonemasons were  employed. 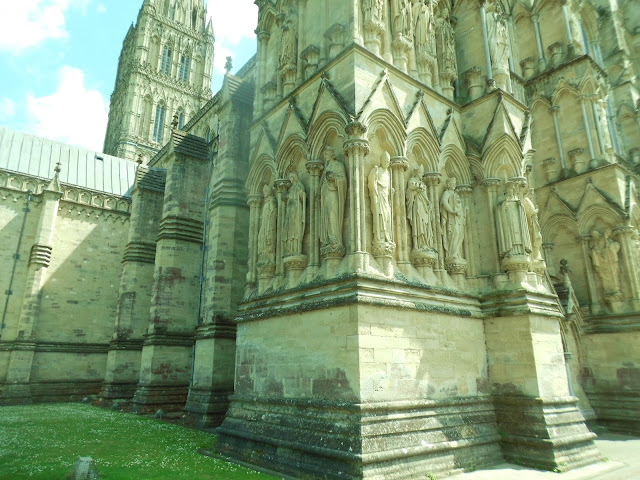 We would like to have seen  inside in more  depth,but time   was against us and  we  had a long  journey home ,we have promised ourselves a weekend here  maybe and  explore in  more  detail as  it is a fascinating old city. The walking  Madonna  artwork in the close is  a bronze by  Dame Elizabeth  Frink .She strides from  the Cathedral  into  the wide world where human  needs are to  be  met. 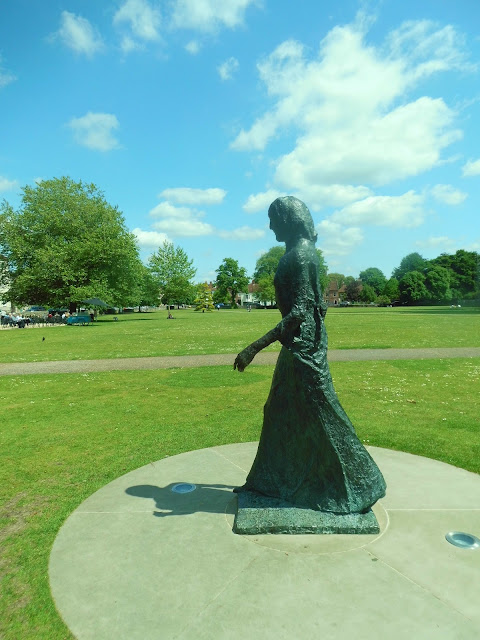 So there you have our short visit to Salisbury , we passed some public  school boys on  our  way back  to the bus and  overheard one say , when  we  get back  we  will have  a game ,it is just the day  for  Croquet. Hmmmm have to get the hoops out when  we get home then   . That was  a week after our Scotland trip.
The following week we  had  a lovely trip out with Graeme  and Sue but will share that  next time.
My stitching  has  been almost non  existent and Sallty will  be  despairing of me ,but I have a little finish to show you but that will  be next time too. I wrote so much  about Scotland  I am not sure if I told you about  the  Lewis trilogy by Peter May.  I have read them on Kindle but needed the proper books ! I am re reading them now. 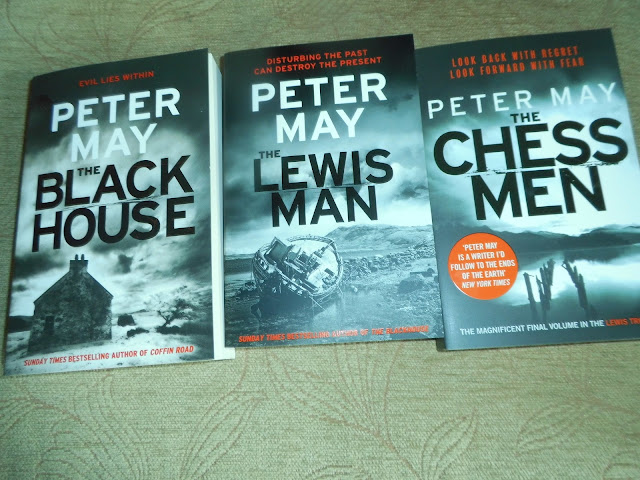 Almost finished The Black House. These jumped into the basket at the same time, I had seen the Knot in a bookshop at the Cathedral and saw they had it second hand in Amazon. 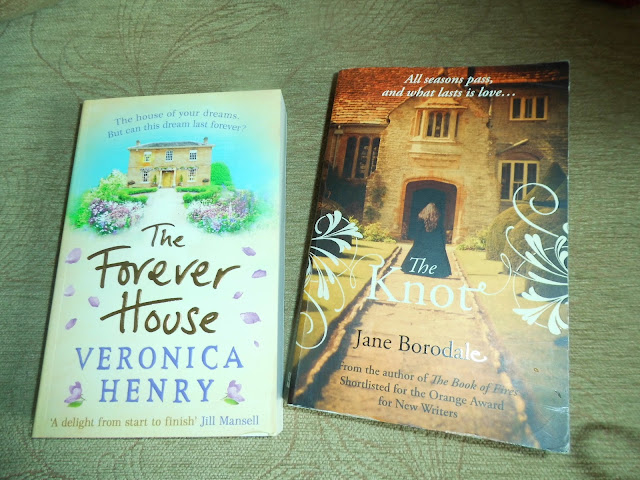 Also by the same author was this one. 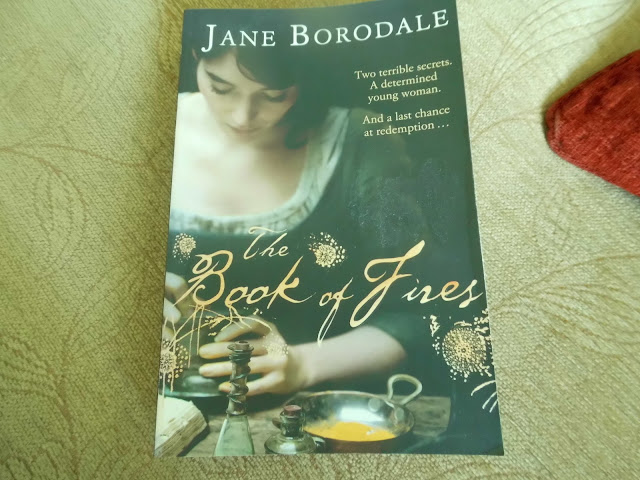 The library grows, soon need and extension for books. I did succumb to this from Lizzie Kate. 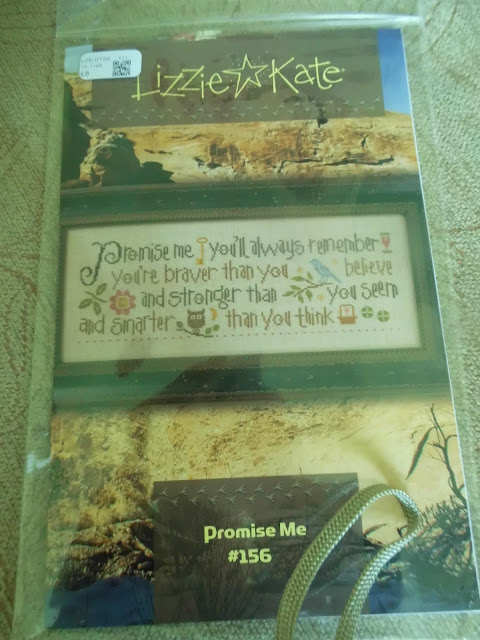 I need to stitch this. Martin has been busy too and has made me  a Celtic cross in glass. His brother now wants one. 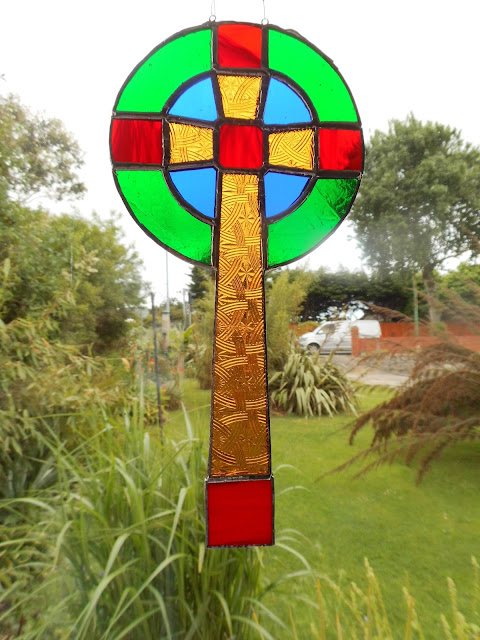 Just a quick update on the sheep makeover. 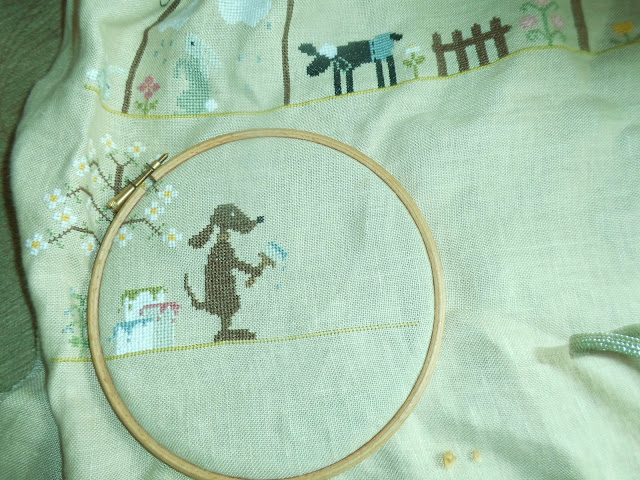 Then I have 4 squares I have knitted toward a blanket. 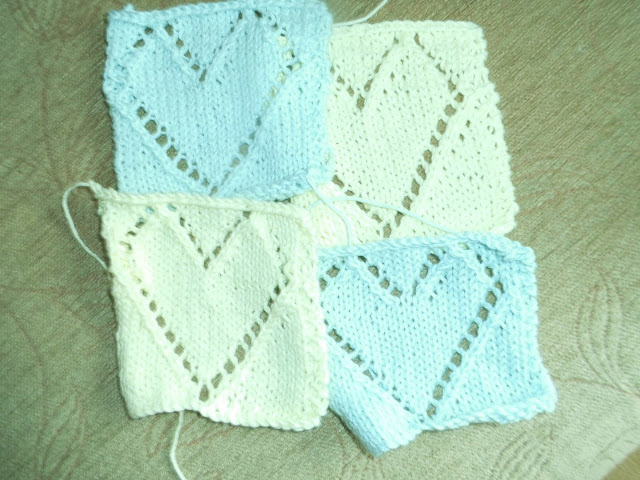 So that is all for this week, hope your coming week will be full of nice things that you like doing. Thanks again for all the comments , I am getting back to stitching slowly but it is slow. Take care of yourselves and this comes with much love and many hugs.
Barb .

What a gorgeous ramble in the gardens and the cathedral is wonderful!
Love Martin's Celtic cross. Oh that stitched dog painting is so sweet!

Salisbury looks wonderful and I think £1 for the gardens was a bargain. They are beautiful. My grandad used to be a stonemason but he never built a cathedral!
I do agree that bus passes will be one of the next targets of austerity, along with the winter fuel bonus and TV licenses. My parents use their bus passes all the time, popping into town and up the seafront, spending money in the shops and cafes.
I love the stained glass cross, such lovely colours.

£1...that's was a bargain. Your cathedral does look nice and clean.
Love Mr B's celtic cross inspired by your latest holiday to the islands.
Pretty heart design on the squares for the blanket.
Lots of lovely books to keep you occupied in the summer house during the coming weeks.
love and {hug] xx

Beautiful gardens, such a peaceful looking place. The stained glass is very pretty, the colours just POP with the light behind the glass.

What a very enjoyable post Barb! The trip to Salisbury with you was so enjoyable. The cathedral really is spectacular and the gardens around the NT property beautiful, very tranquil. There are still some things around that are good value :-)
Your little blanket is so pretty. So many wonderful enjoyable things like visiting, stitching, knitting and reading all with claims on our time! How on earth do we choose. Can you fit croquet in do you think....haha!! I'm making a journal at the moment and it's taking me away from my stitching and reading!! Your books always look so interesting. And then there's the garden....... :-)

Your makeover is coming along beautifully. Love the stained glass that Martin made. He is very clever.

Nice new stash! I need to get mine finished up so that Abi can display it.