I am going to attempt to finish this today . So be prepared. We left Aviemore  at  9 o clock to travel  down towards Glasgow. I was hoping for half  an hour in the town as I had seen a lovely Harris Tweed shawl in one of the shop windows  and it was half price. It was not to be though and we left it behind . I did  take a  few pics on route ,but have no  clue to where they were. 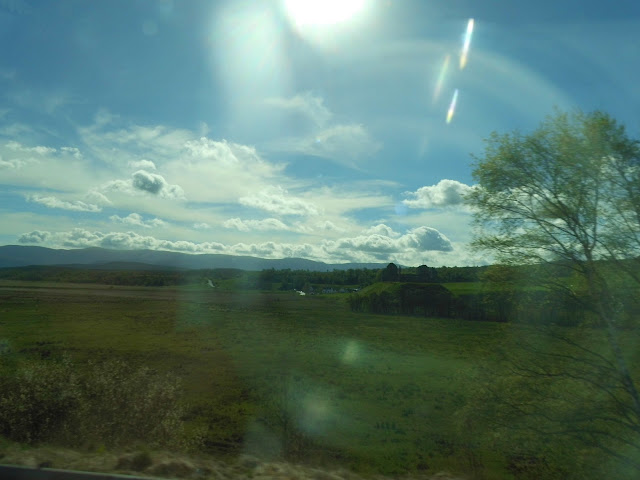 I will not be showing you lots of these ,you get the picture. We were going to stop  in Pitlochry for an hour and a half. There was a walk 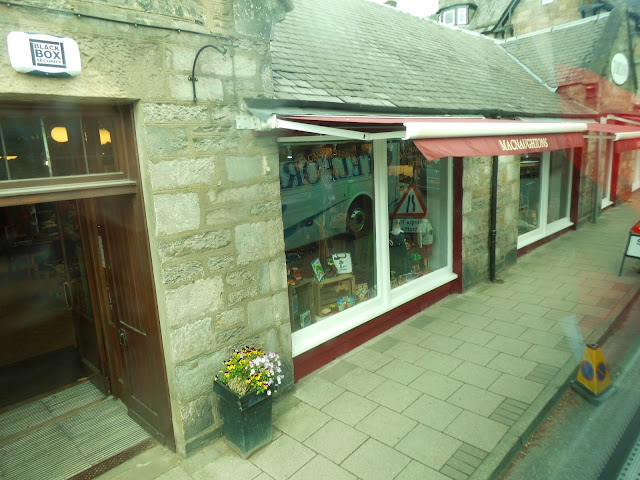 to the waterfall to see if you could see the fish jumping , I passed on that but Martin said  he would go. I hit the shops, Not  big time because of  weight again but got a few little  bits from  this shop..I know its a dreadful picture but I needed a reminder  of where I had got things. You will see them later. Martin meanwhile had found the railway station and took a picture of the porter. 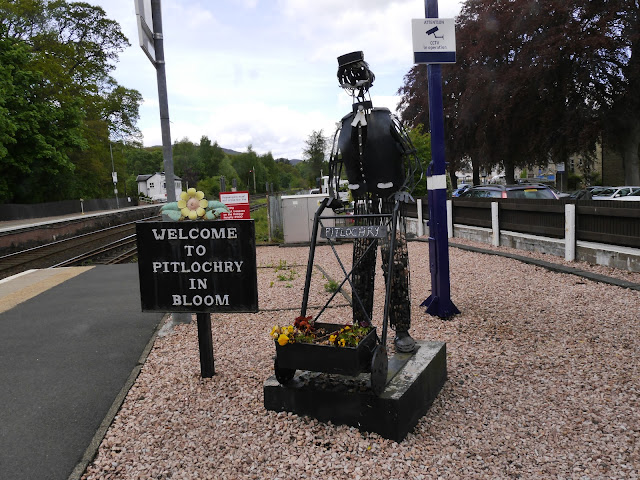 He found whilst there that the  Edradour distillery was 2 miles away but although he could have made it and back  he would not have had time to visit. I had bought him  some for his 60th birthday from  here and I  had not realised we would be visiting the town. 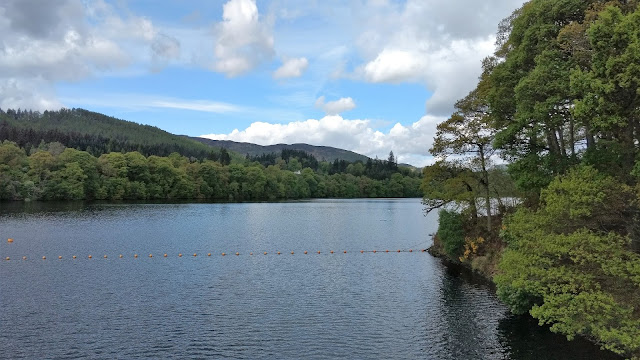 View  upstream  to the Salmon fishing  waters.
Martin  then  found me  at  the designated  meeting place and we went for coffee and cake  yum. Onwards then to Stirling ,where  we were told we  would have  about 2 hours so time  for a climb  to the castle  if we  wished. What a difference  to the islands , the peace and  serenity have  gone. 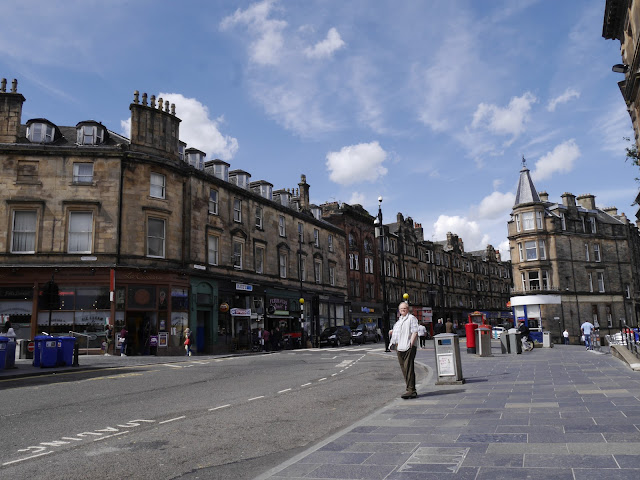 Stirling high street. My goodness it  was hot. So we climbed to the castle , decided  not to go  round as not enough time to take  it in properly.. We did see  Robert  the Bruce  outside though. 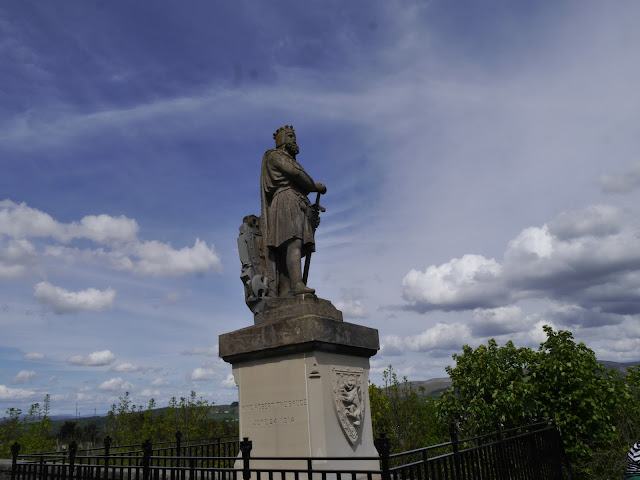 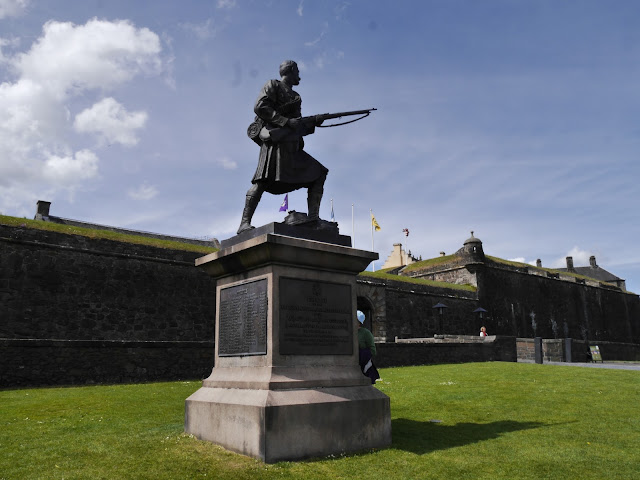 We treated ourselves to an icecream here , it was needed. We passed the Old Jail on the way up too. 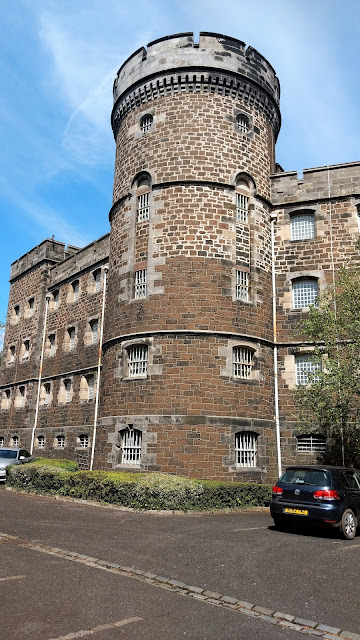 We also passed  this  building  , took the photo to show Kate our daughter and children. Thought it quite apt. 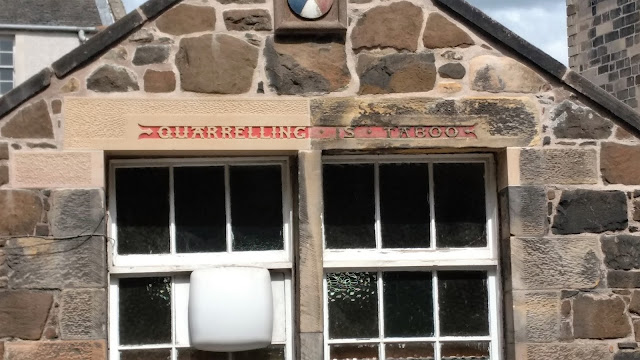 We took some  photos of Stirling from  the castle.  It was these chimneys that I took a fancy to. 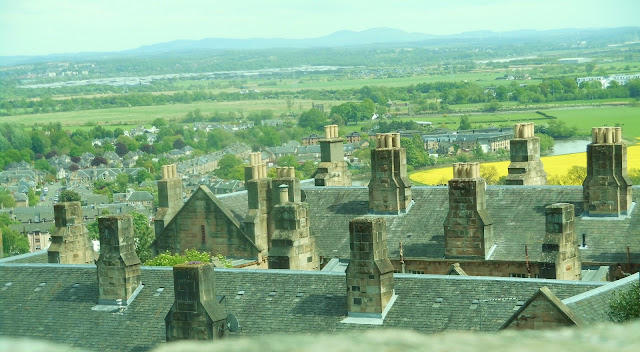 You can tell how far up we had to climb. I had seen a little friend to buy so we walked back the way we came and bought him ,again I will show you that later.I  wasn't  sure if I  had been  quick enough to catch the squirrel ,but as  you can  see I  did.. 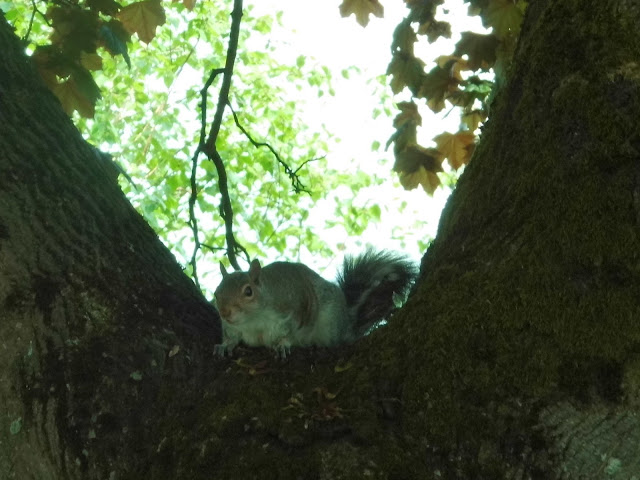 So our journey had nearly ended and  we  were  back  at Glasgow for  our last night.We said our goodbyes got a pic of Kimberly and  Steve .Which is on Martins  camera  so not  one here.  Not such a good night as the air conditioning unit thing was above our floor and was humming all night as we were on the 9th floor. We saw our nice waiter and he remembered us . Lovely young chap. So after breakfast we  headed our way over the road to the airport ,checked in  baggage ,phew nothing to pay and then waited for our flight at 11 oclock.No vip this  time and  we were further back in the plain.  Fluffy white clouds and blue skies. Not sure but thought we saw  Blackpool Tower so I waved at  "home" . Our dear daughter in law Sue was waiting to take us to  theirs. She so kindly had done us lunch and after that we got in the car and drove home. Very tired  we  fitted a lot in , but we have so many lovely memories of that special  holiday.
Just a little glimpse of things we purchased. 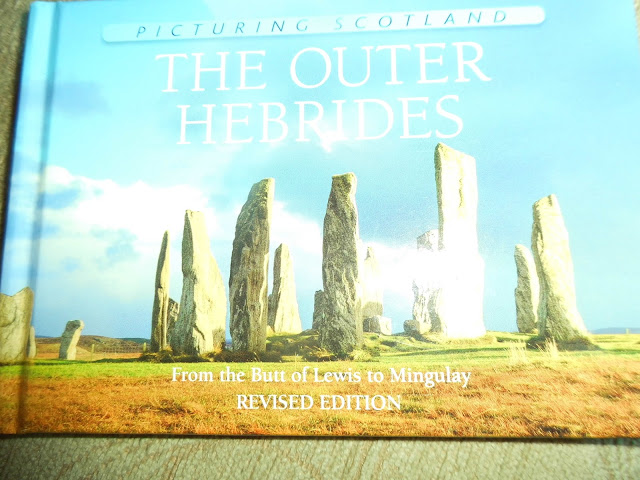 lots more books on the area , but I did see one that  I had to have . 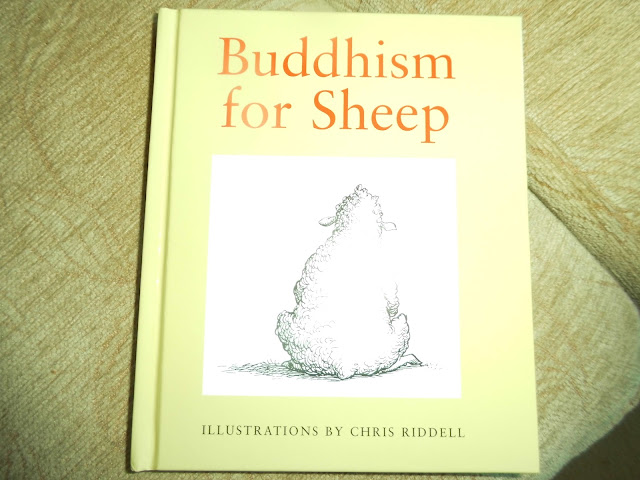 Just amused me as I said earlier we bought lots of books on  different areas  we  visited. More about the archeaology for Martin. The Hebridean jewellery that Martin bought me and a scarf to be fastened by it, I bought the scarf in the shop at Pitlochry. 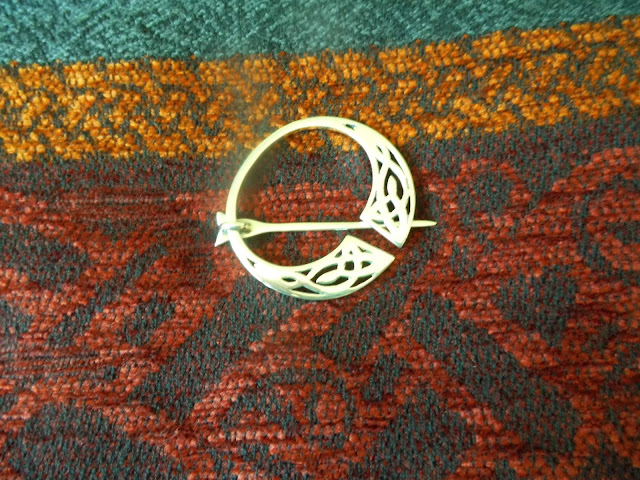 In the shop where I bought the scarf I also bought Martins mum a teddy dressed in tartan.  It was her 92nd birthday the day we arrived home. I also bought this to stitchl 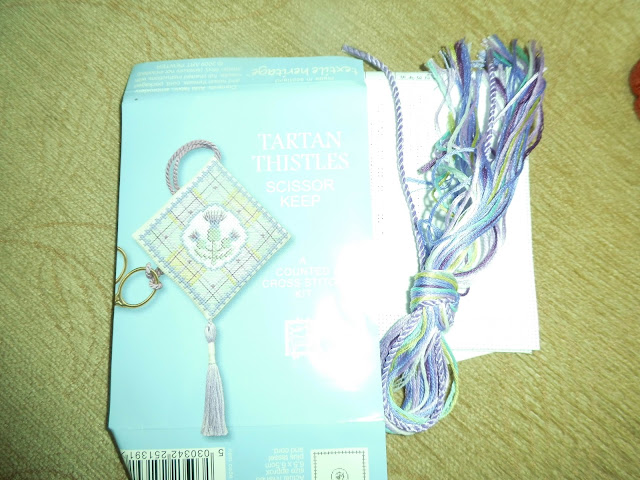 A scissor keep , does anyone have the same problem as me , if I have a scissor keep on a cord on my scissors ,what is the betting that at some point I will cut through it . Oh well perhaps this one will be different. I told you that I had bought a friend back from Stirling ,well he looked so lonely sitting there in the shop window.I had to have him.  So let me introduce you to Donald  . 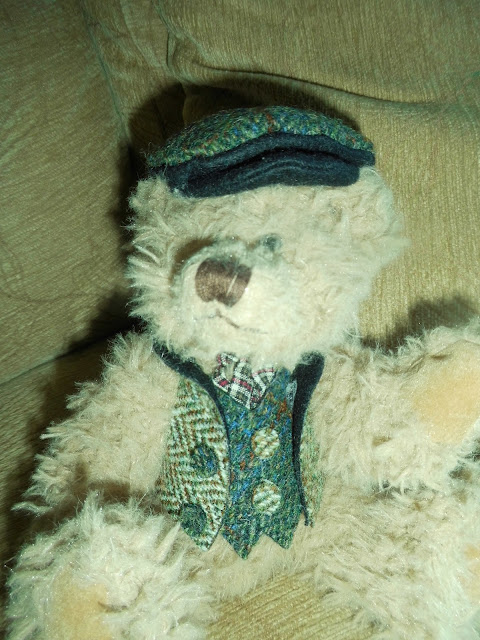 He has an authentic Harris Tweed Waitcoat and hat ,I called him  Donald ,as  he has no trousers. Perhaps he will accompany me on more trips we will  see.  Last but certainly not least we had to send for some of this as it was too heavy to fetch back on the plane. We also got one for Graeme and Sue for ferrying us to and from the airport. Thanks to you guys. Can you guess what it is, only online from the Distilllery . 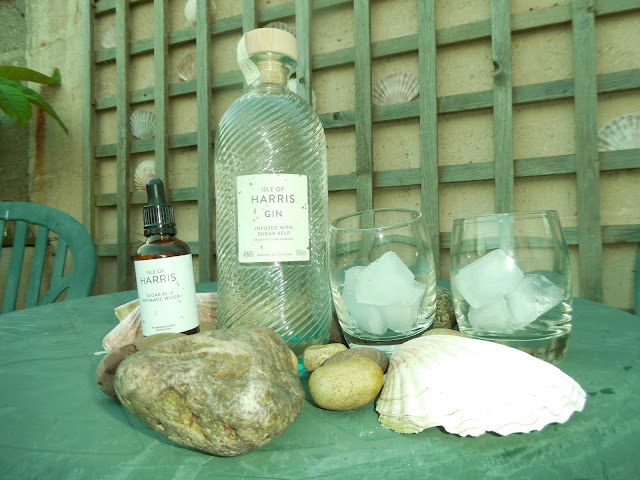 I do hope you have liked our trip  to the Outer Hebrides , Please leave a comment  I have loved hearing your thoughts through the week.  So cheers here is to the next one , hope it is not  quite so many years till   that one.,
Hugs. Barb.x
at June 03, 2017

Well it looks like your vacation was a complete success. I love the thistle stitchery you purchased....looks like a fun stitch. I'm sure Martin's Mother loved the bear....he's so cute! Here in Florida we have nothing like what you've shown us in your pictures. All we have is sand, beaches and a stupid mouse that people from all over the world come to see. Why? I have no idea.
Hugs

The pin and scarf Martin bought you are so very lovely. The teddy is adorable. I am sure Martin's mum love's him.

Have been enjoying your photos of places I will never visit, so thank you. Lovely scarf and pin but Donald takes the prize! He is precious!

My heart is smiling to look at all the lovely photos ..so pretty
The teddy is so cute ..the scarf is so pretty
Big hugs x

It looks as if you had a great time Barb. I love the scarf and pin

Looks and sounds like you both had a wonderful holiday. You'll need a week to recover! Love the scarf pin and ... Donald, what a cutie. Thank you for taking us all on your journey.

Love the scarf and pin, a delightful remembrance piece of your lovely trip.
Cheers! xx

Donald, where's your trooosers?!
Love all the photos, it seems like you had a wonderful time.
I'm a big fan of Chris Riddell who illustrated the sheep book. You should check out some more of his work. He's a very good public speaker too.