Well  I am a day late in our time.We went on  a surprise  outing with Graeme so this did  not  get done yesterday.I will  tell  you about that  at a later date. So we awoke on Day 5 to a  rather grey  overcast and windy morning.  I was not looking forward to the afternoon ferry crossing to Ullapool. However,  I  tried  to put the 46 mile  an hour wind that was  forecast  out  of my mind  . ARGH.
We packed our bags again, a bit like  the  Okey Cokey in  out ,in   out ,shake it all  about.  So then we thought we would  visit  the museum. We wanted to  see the Chess men of Lewis, so we  went through the woodland walk.  I took  a  picture of  this  fern  , I was going to put it in the Scavenger Photo Hunt for  Green ,but changed my mind. 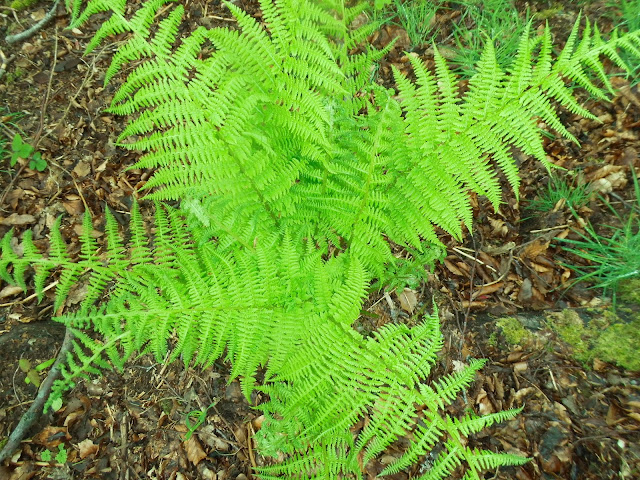 This  was in Scotland  and not down the garden lol.Unfortunately we  did not get any photos of the chess men ,they were so intricately carved, it was hard believing they were so old.  There were only 6 there as the others are in  the British Museum. Martin thought there maybe something about the museum on the internet or , we could  pick up a leaflet as  we left. We  had not reaised it  was a travelling museum and would  only be there for  18months so no information to be had  .  Take our word for it we  did  go see it.  As  we had  a couple of hours we decided  to walk into Stornaway and see if we  could  visit one of our grandsons godmothers  friend.  She  had asked us if we  had time in Stornawy we maybe would go and see her friend at her cafe  and perhaps  have a coffee. It had started  to rain so  we were quite pleased  to find it. 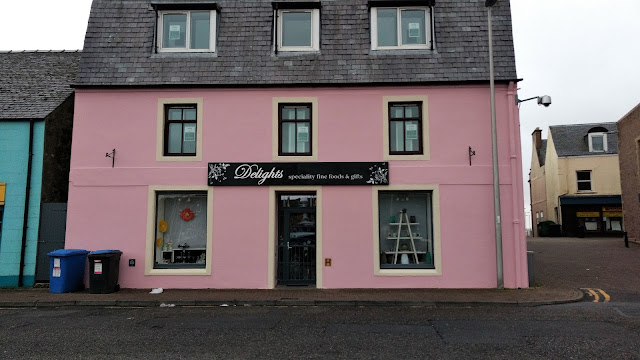 We couldn't really miss it  being pink.After ordering our coffee we introduced  ourselves and she was so pleased we had called , would not hear of  us paying for it and asked  if  we would  like  something  to eat  too.  I  was  still thinking of that  ferry so we declined her  kind offer, after telling  her all  the  news  we crossed over to take a picture of The  Herring Girl. 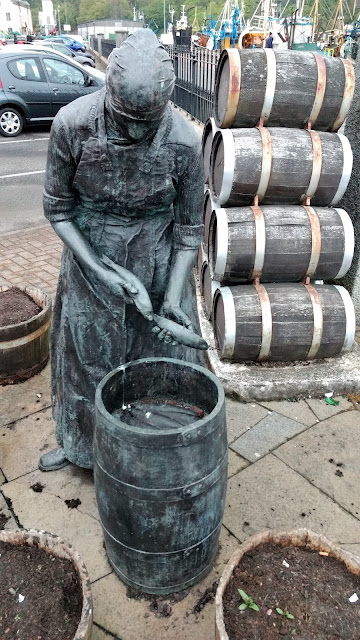 No way could I have done that then or now.  Martin then needed to look  at the boats . 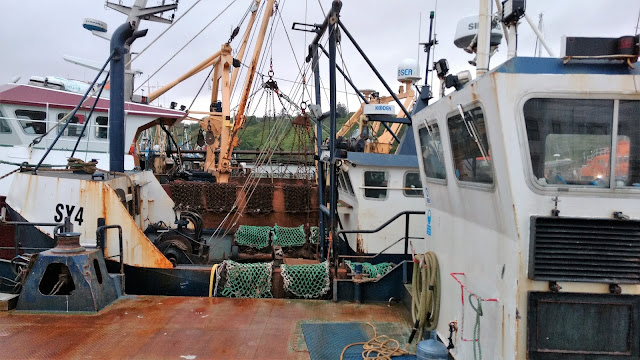 I did NOT want to  look  at boats.  So we walked back  up the road  and called in the Hebridean Jewellery shop and I was treated in there to a shawl  pin. Will show you that in  the last post I do about Scotland. A few yards away we had noticed on our way in, was a  shop  called the Harris Tweed  Shop.  Well  see what you make of it. 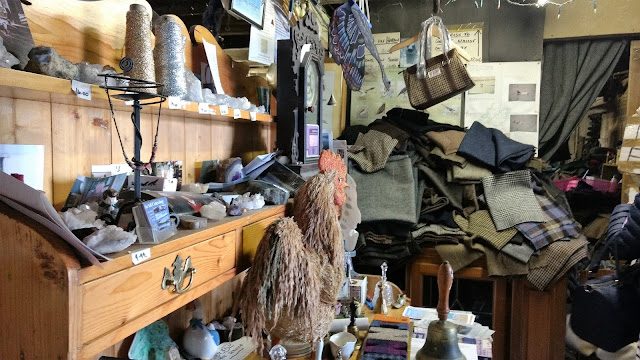 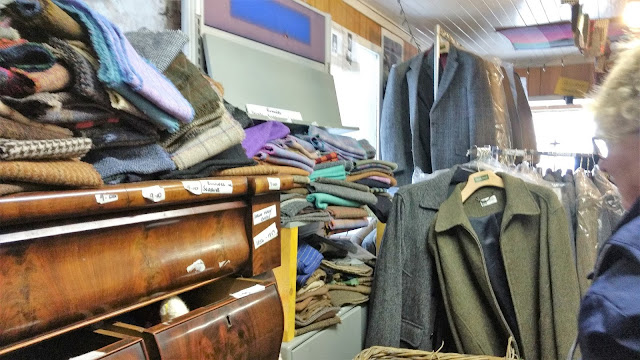 And how about these socks!!! I suppose there was rhyme and reason to it. 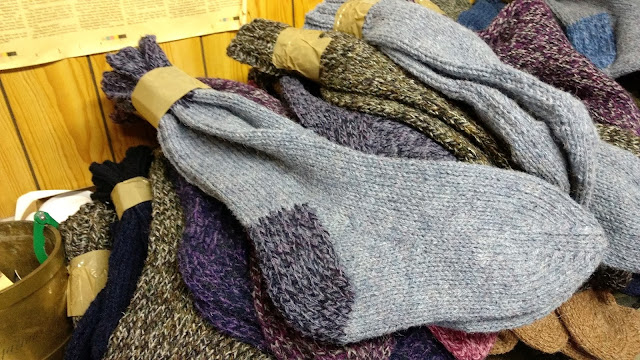 Nothing bought  here, however I was  tempted by a carrier bag full  of  Harris tweed strips for £1.Just had  to think of the weight so it was a no.It would have been ideal  for putting in a rag rug.
Rain  stopped we walked back  to the hotel  passing  these on the way. 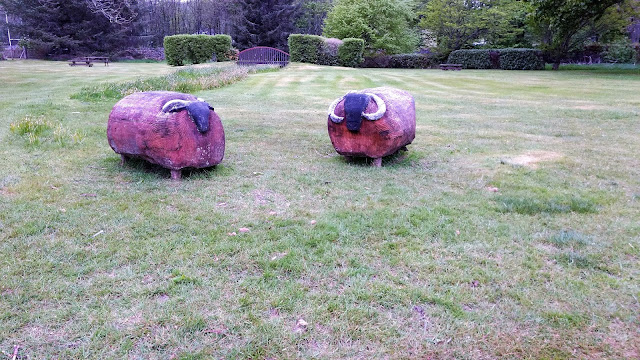 We got closer to these than any real ones. So no putting it off any longer . We get on the coach and travel  to the Ferry. 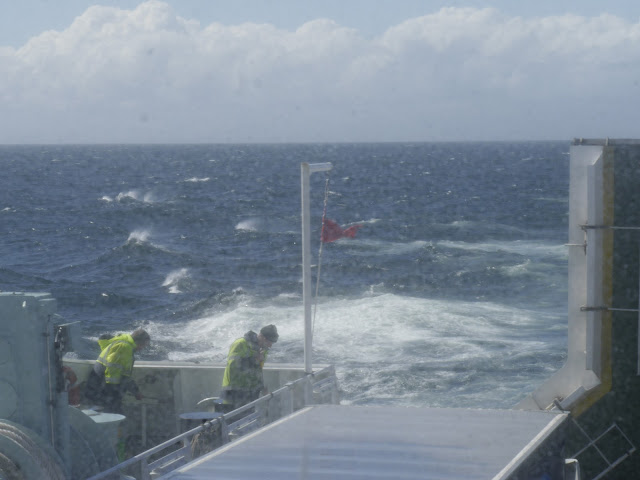 We sat at the back of the boat in the middle. Less movement there Martin  said. He did get up and wander round I did not , I was quite  pleased with myself  I did  not look to see where the lifeboat  was. I was  relaxed enough  to get my book out and read . VERY proud  of myself ,however ,I still do not love boats. 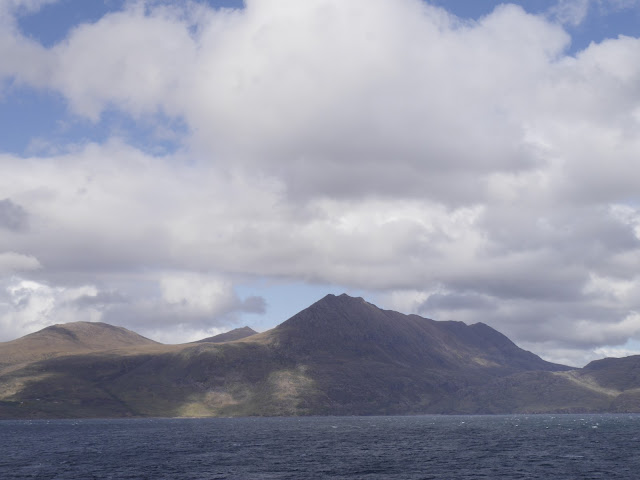 On  our way,and getting  nearer. 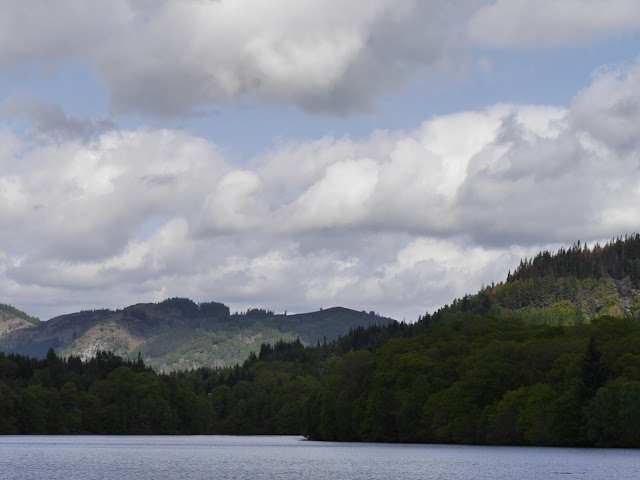 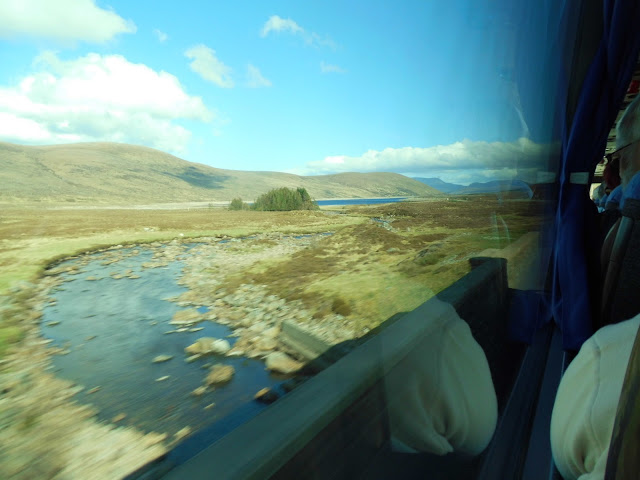 We were told  on the way that  we wouldn't be  staying  in  the hotel we thought we  were,  they had not  got  us booked  in and so  Kimberly had to find  somewhere else  .  I  expect she was wondering what she was going to do with  all of us for the night. So we travelled  a bit further and got to Aviemore. 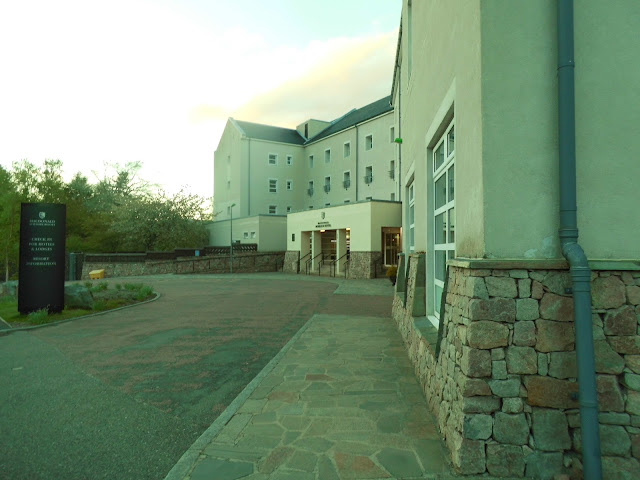 We were given our rooms and after a short while had dinner,after which we walked into Aviemore  . The light was going but you can just see  the snow  on  the Cairngorms. 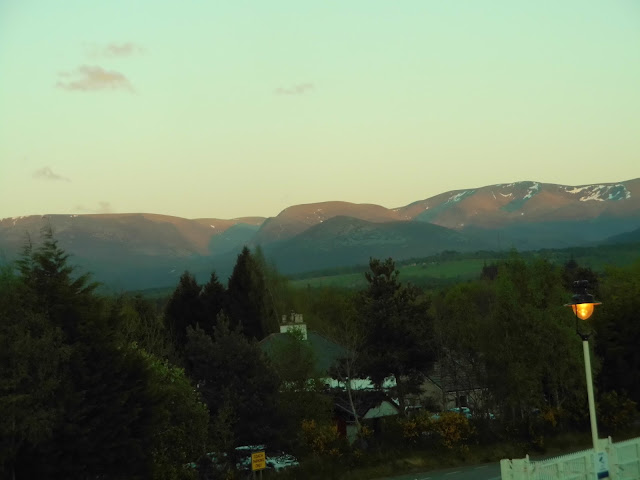 We were really in Aviemore  here is the sign at  the railway station. 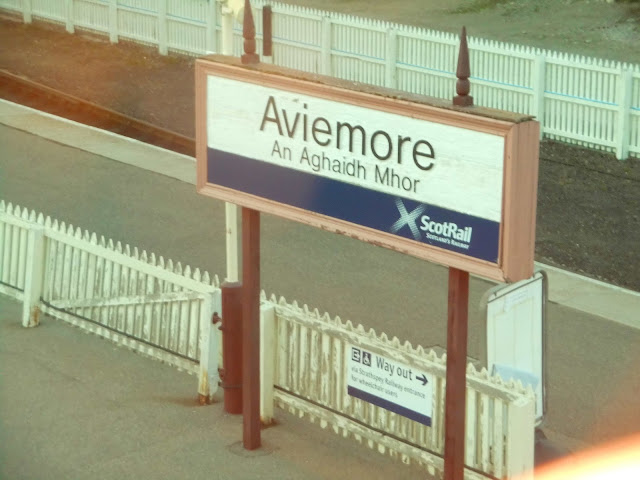 No shopping to be  done as everywhere was closed.  If you look closely you can see the litte bunny we saw on the way back. 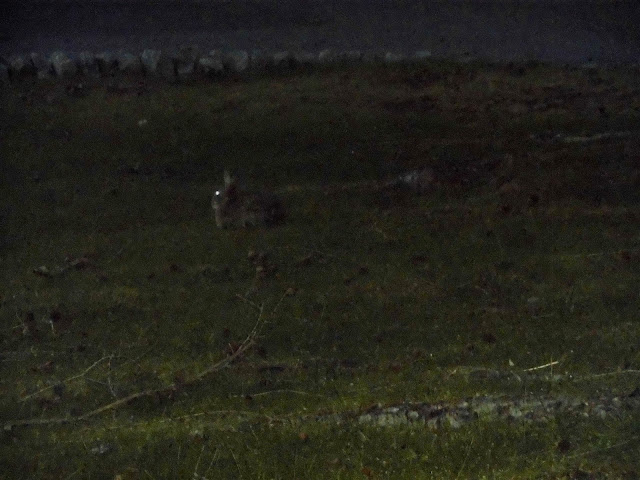 Just see his eye glinting, there were two  but they weren't going to hang about, they were  gone in  a flash.
So not so much to show you today .  Tomorrow  will  be our last day in  Scotland  and our hotel  will  be the Holiday Inn at  Glasgow again..So night night bunnies sleep tight.
Hugs Barb.x
at June 02, 2017

I'm finally catching up on my blog reading and I'm loving all your travel posts! Wow, how wonderful for you to see so many places and sights.


Lovely photos again, looks like you had a great time.
I don't like any kind of boat , I have had some bad times on water when we hit storms , never again.
But I like to see them but thats it .
Thank you for taking us on your trip hugs.

What an 'organised mess' that tweed shop looks.