Lavenders green, if you'll be king  dilly dilly I will be queen 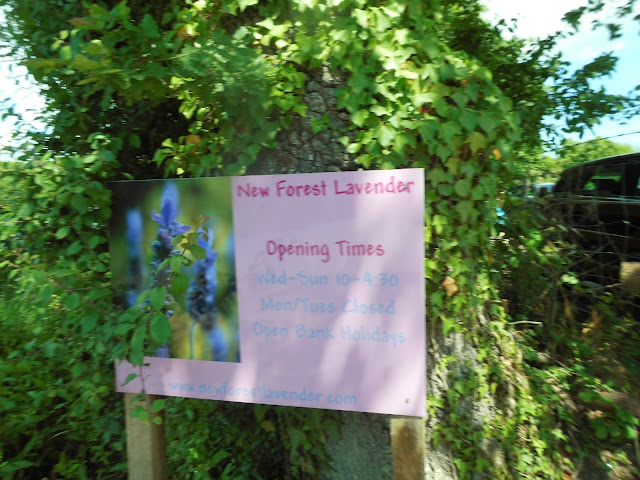 A couple of weeks ago our son Graeme and daughter in law Sue decided  to  take us here . Oh it was lovely , I adore the smell  of  Lavender and  I think by now it will  be  in full bloom. 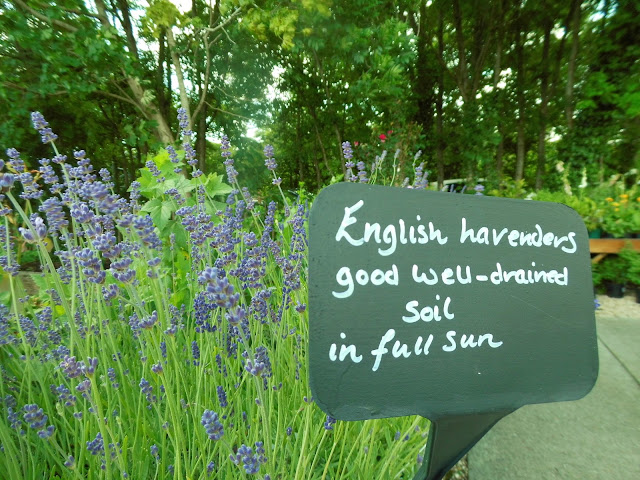 Another  great place to visit, I don't  think it has  been  open very long  so it is  still being "found".All things  lavender , scones,  cake and cordial. 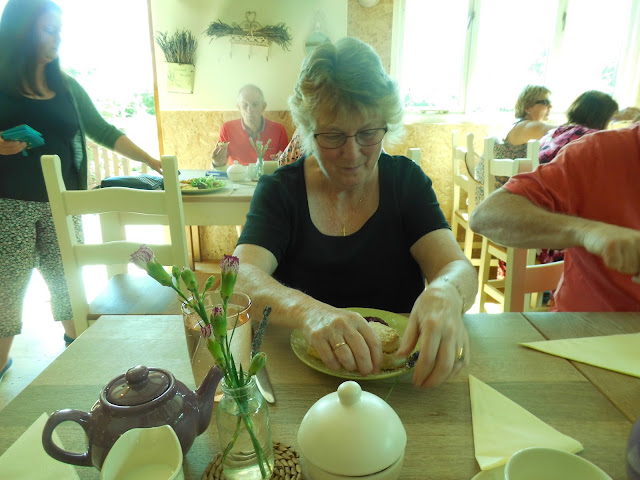 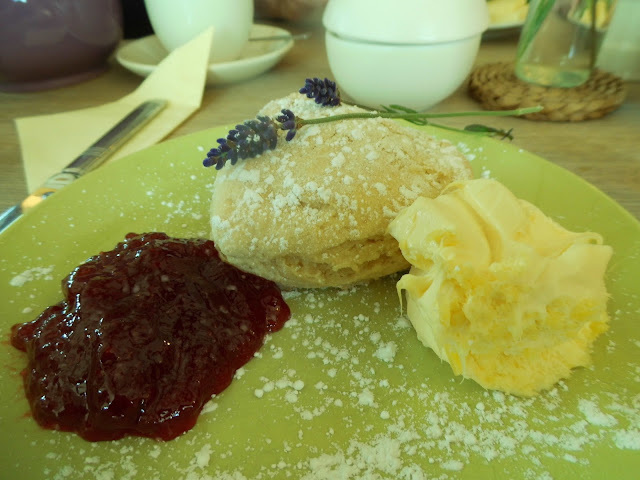 I had the cream tea, and himself  had the cheese  with chutney so we  did as G&S did and had half of each others. Hmmmm delicious. 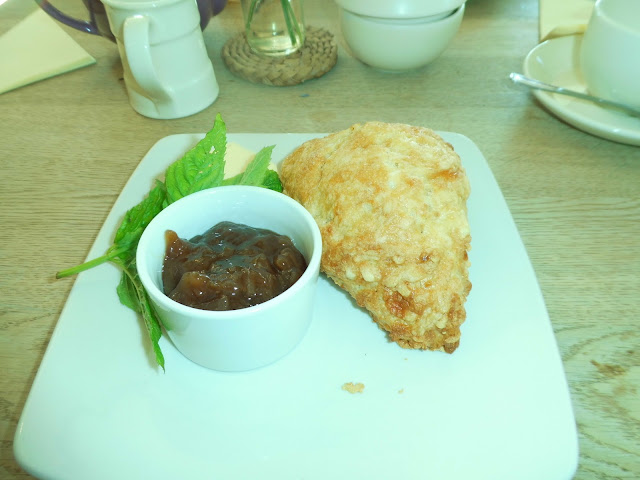 I am liking these summer days out. Not  a very big garden but lovely things to be seen. 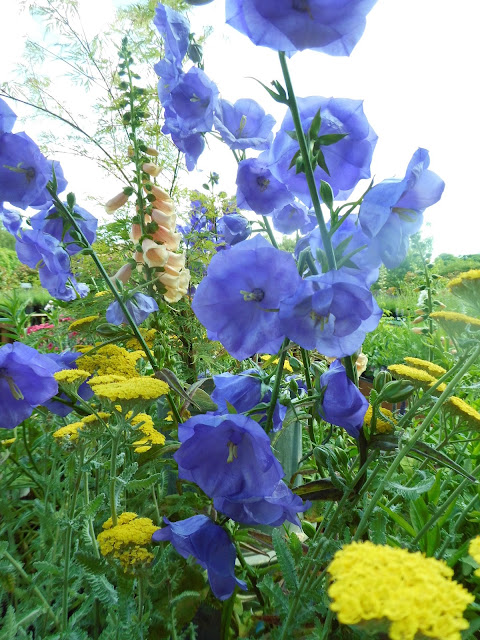 Canterbury bells, foxgloves  and achillea. Alliums in  a  circle. 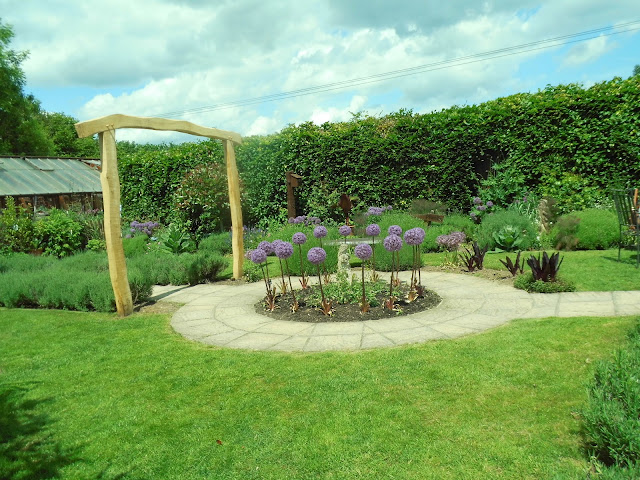 Like lollipops,and again the lovely shade of lavender. After we visited the shop and bought a rose called Hot  Chocolate we returned to Sue and Graemes and enjoyed a few of these in their garden. 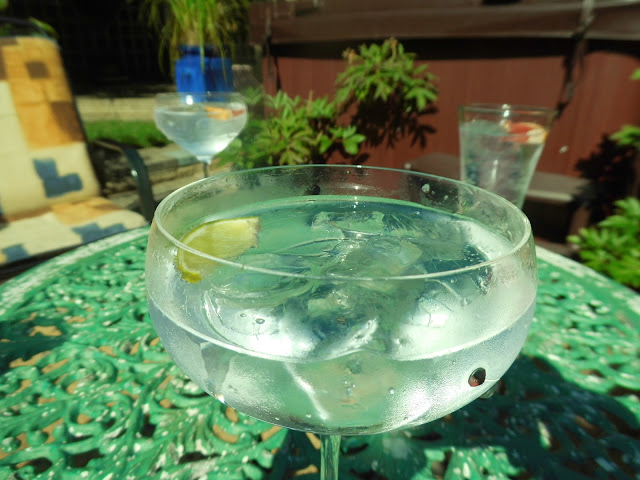 Hmmm Harris G&T ,sitting in the sunshine with good company ,who could ask for more. Reliving the lovely afternoon. 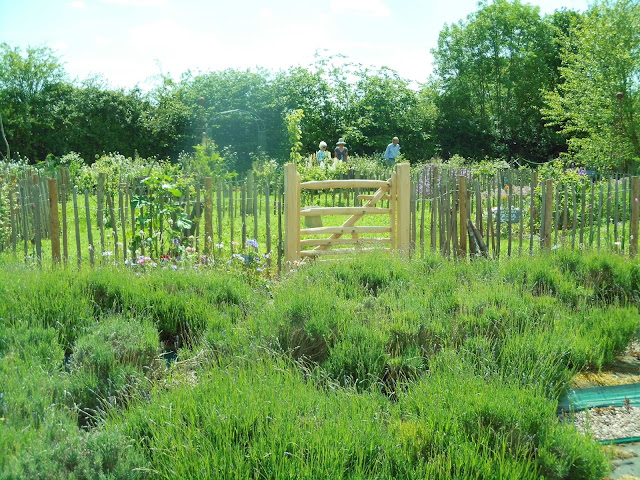 Can you imagine the smell  when it is all out.
You will be  thinking  I have not  been doing much stitching etc  , well you will be right , my hands are playing up at the moment so I am stitching a  little  but not  a lot.  I  did manage  to finish this for my friend Junes birthday.  Although I feel maybe I should not of put her age on  it .  Oh well damage done and  she  did not seem  to mind. 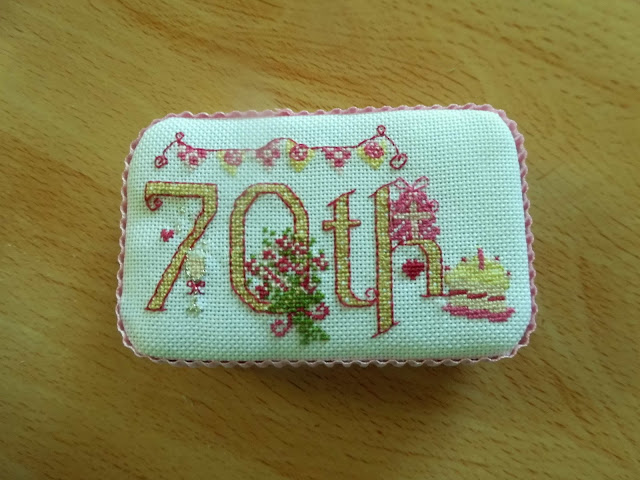 Nothing else has been finished it is all just wips.I do  have  a spotty sheep on  the Makeover piece  which I will  update  you  with next time. Elizabeths dress is being  stitched ,Jubilee is still minding  her sheep, blackwork has anotherblock.  and Spring has R almost completed ,Next time will give you  pics  of  the,
Last Thursday we  decided  to stay local and  went over to see a dinasours footprint and a few not  extinct animals  on   Portland  . 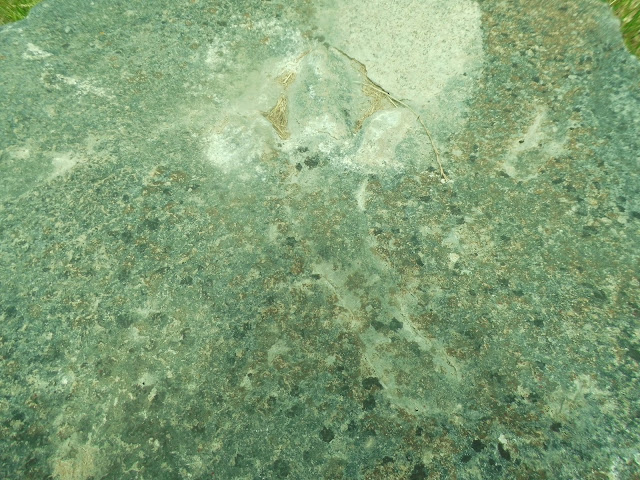 You can  just make out the three toes, but only if you know  what you  are looking for  hmmmm. We also saw these carved in the stone. 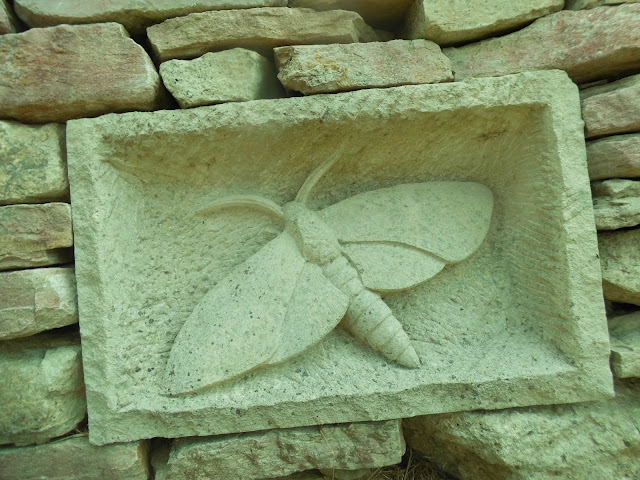 And a snail. Which we have  plenty of in  the garden . 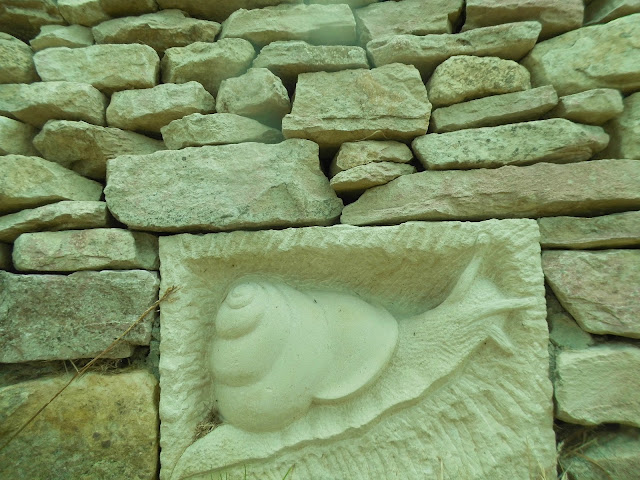 Wouldn't want one this size in  the garden though. Animals we were suprised  to see ,totally unexpected. 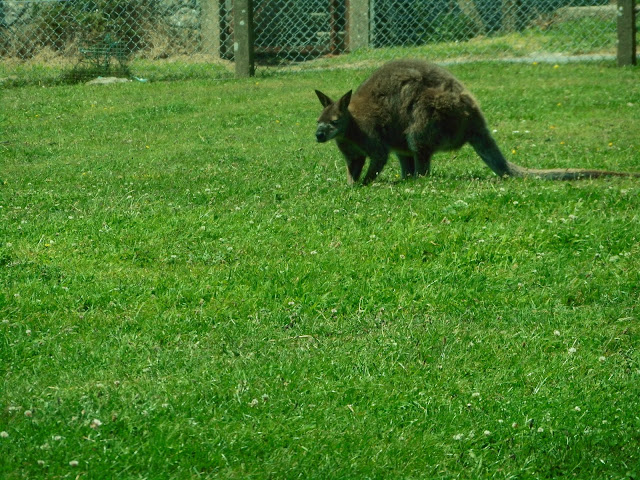 Now I did not think I would see those on Portland. I did like this character though , he was no Jemima  Puddleduck though and was a  bit belligerent, 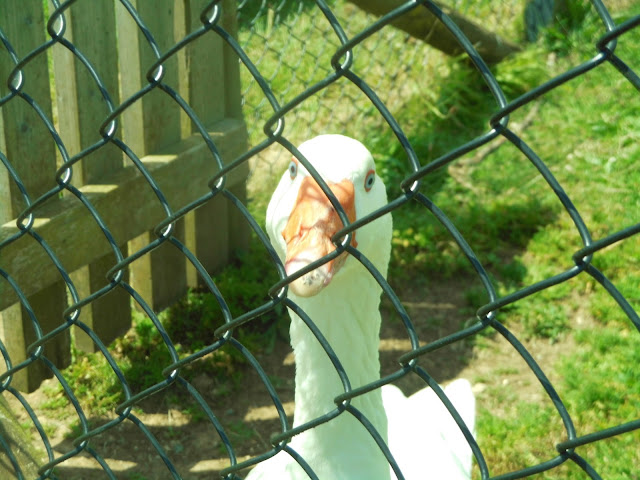 He  was rather  handsome though ,  the animals  were  very tame , there was a schoolparty there when we were  and they could feed  the animals which caused lots  of shrieking  and  hilarity.
I could not get over the size of this pig, 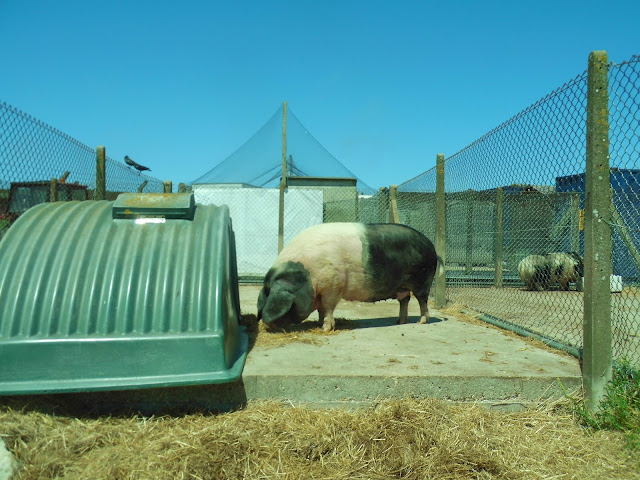 He was HUGE. Of course there were these and sooo tame ,but could not get through the fence to them. 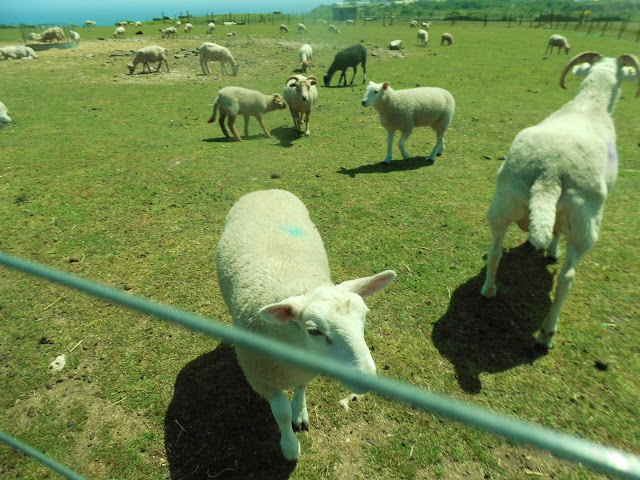 Sheep and goats, one did really want to make friends though. 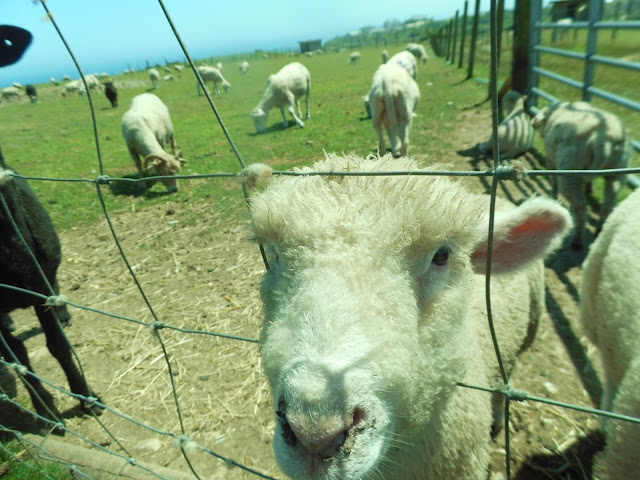 We walked to the edge of the farm and this was the view. 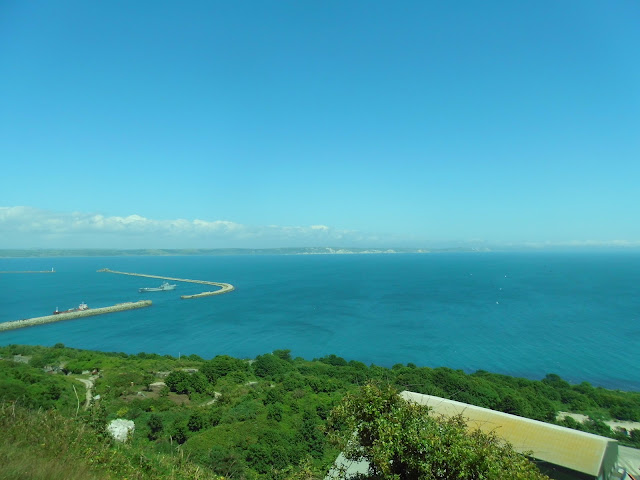 Looking across to Weymouth, the harbour is where the 2012 sailing was  held.We found lots of wild orchids. A rarity. 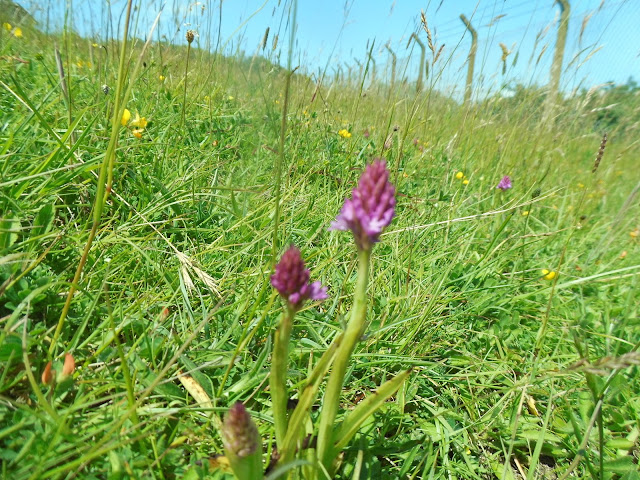 I could go on and on but I won't. We wandered  our way back to the car stopping on  our way to speak  to this guy and take some views of Chesil beach and  Portland. 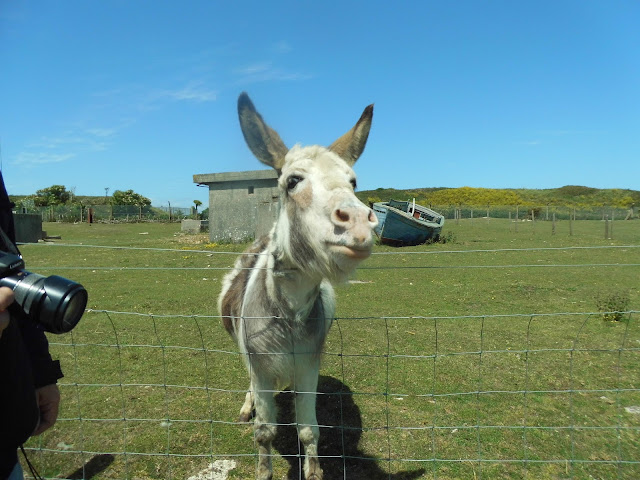 I  love this view of Portland . 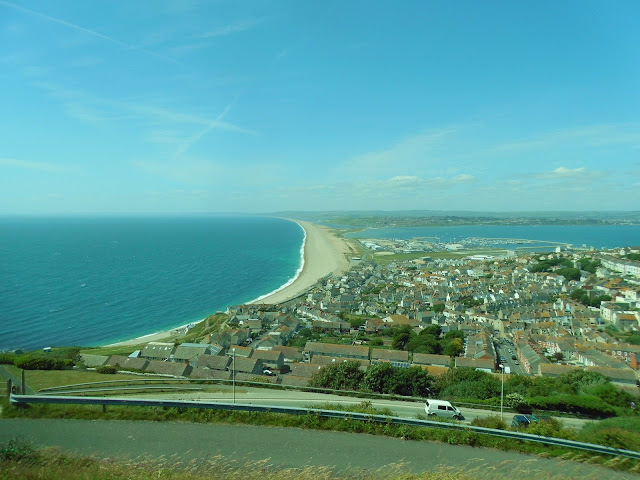 So there is last  Thursdays meanderings  ,  G&S came down that evening as Graeme  needed to see his dad for fathers day as he  was working on   the day itself.  So we pootled off  to Portland  again,  we were going to the cove for them to eat but it was full to overflowing so we  called in  the Boat that rocks  and enjoyed the view  from there. 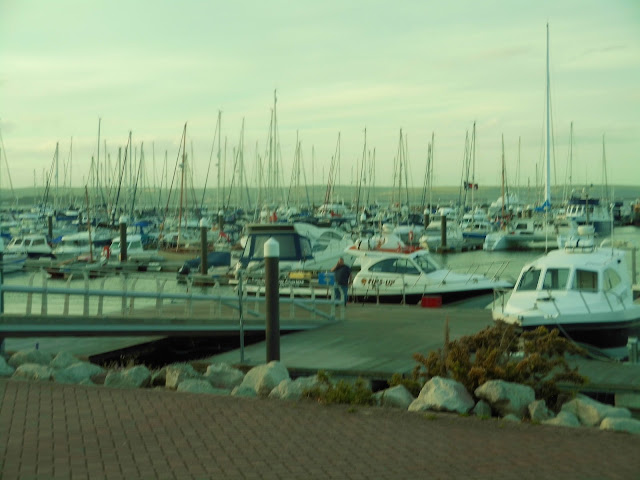 We do live in a lovely part  of the country ,but then   I am  biased.  Shall I take you round the garden now before I go and play in the kitchen. 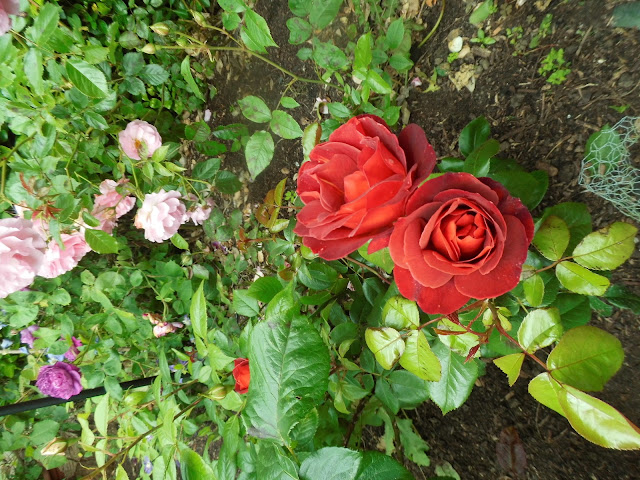 The new rose Hot Chocolate. Some  lavenders for me to kill as I have no luck with them usually. 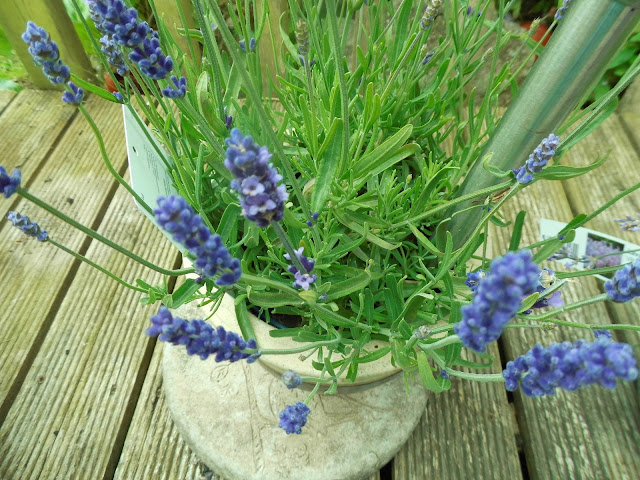 I bought three of these to  go on the decking. Books yes more books but they can  wait  until next  week.  I  did  see  this bench and loved the saying  on  it.  So I will leave you with that and say thanks to you who  are so kind to leave  me a comment or even just glance  my way.  Take  care and  this comes  with
Much love  and many hugs.
Barb, 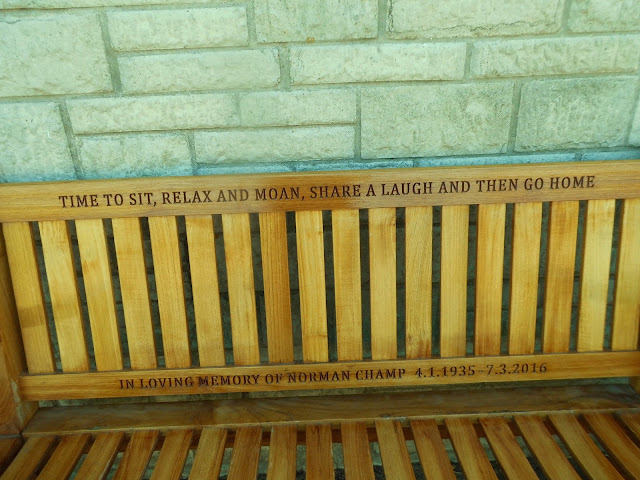 I love the donkey. :D I used to have the Hot Chocolate rose years ago. It is gorgeous.

Lovely post, Love the sheep and the donkey so cute , yes you do live in a beautiful area.
Love the Hot Chocolate rose we brought this one the other year , it is just starting to like where it was planted so hoping it will be better this year.

I went to Portland many years ago it's lovely.
I have been looking for another rose to buy with your gift voucher , but it's so hot I will wait a few weeks.

I loved my little box Barb and I don't mind at all about my age being on it , I am proud to be 70 and you could make me one at 80 if you like ha.
Thank you my sweet friend for making my birthday week so wonderful .
Have a fun week and enjoy this hot weather hugs and kisses.

I love the smell of lavender too. it's never quite the same when it's in a perfume or cream....the flowers are the best! Beautiful stitching and I'm sure June loved her gift. Hope your hands are better and you can get more stitching done.

Lovely jolly out - some glorious views and wonderful weather. Loved the carved creatures in stone :)

Lovely days out Barb. I adore lavender scones but himself always moans when I make them and says he prefers "proper" scones without perfume.

What a lovely day out. I love lavendar and used to have a whole hedge of it but only have one small plant in this house. Must get some more!
June seems quite happy to announce her age! It's only a number after all, just a big one LOL

A fantastic post Barb. It looks like you had a wonderful day out. I love lavender. It smells so beautiful.

Delightful pics of your days out.
Love that view!
xx

I love the smell of lavender too. it's never quite the same when it's in a perfume or cream....the flowers are the best! Beautiful stitching and I'm sure June loved her gift. Hope your hands are better and you can get more stitching done.