.
Hello everyone before I start on Mays assortment please can  I thank everyone for their comments  on Aprils  post.
I did have to find  my thinking head for this months photos,but find them I did  and here they are.

This one had me wondering ,but thought I would go for the alternative meaning. 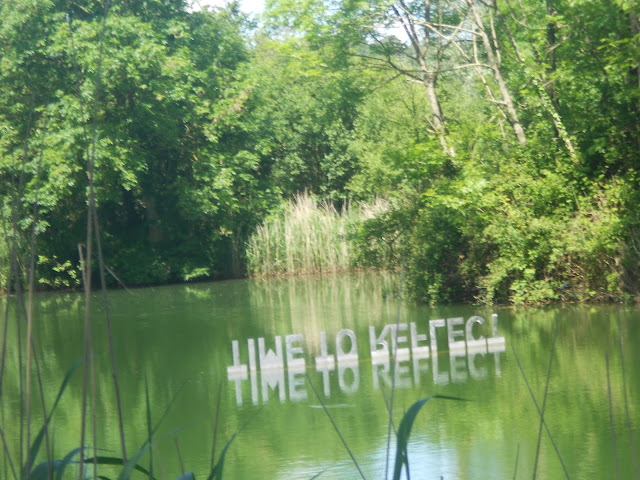 This was taken at Pallington lakes ,the lakes are cool,but I thought the words in  the water  were rather "cool"too.A beautiful day to wander round and see  all  the sculptures .No dogs allowed  though and no  children.

2. Disaster.
Another one  that made me think.
Last year this was  a bit of a disaster. 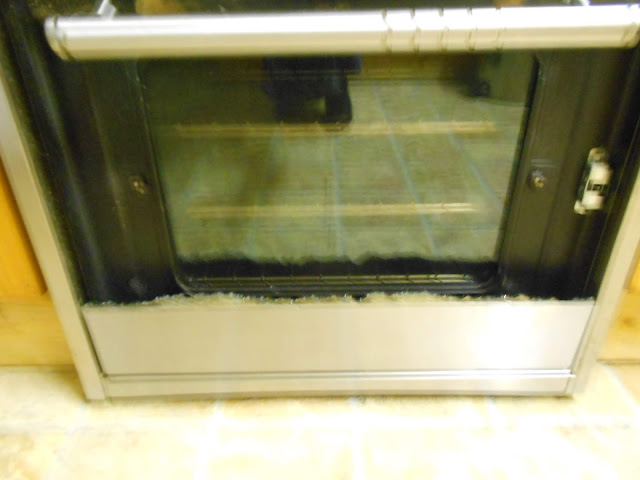 My cooker,minus a door,,I hit it with my head one morning ,hubby heard a crash and found me on the floor surrounded by glass, an ambulance was  called and I  had  staples put in my head. Lots of tests  to find  out why I had blacked out,but no  real  reason.  I did find  I have got  a brain  though as they did scans LOL.

3.Movement.
Gosh these were hard. 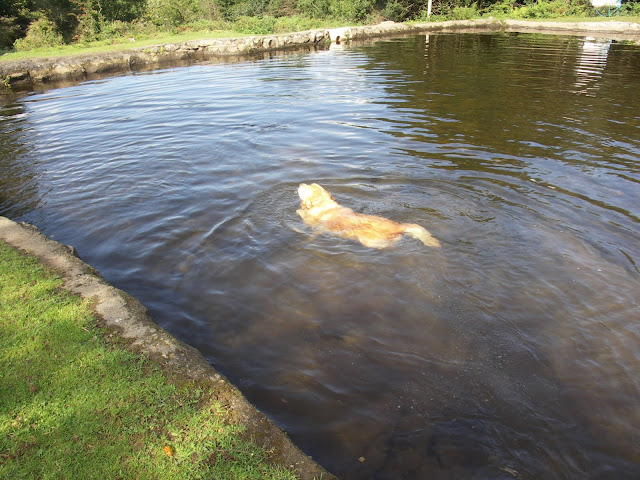 Where  there is water there has to be a retriever  in  it.Our dog  Ollie in Colley brook near Tavistock ,thought swimming  was  a movement. 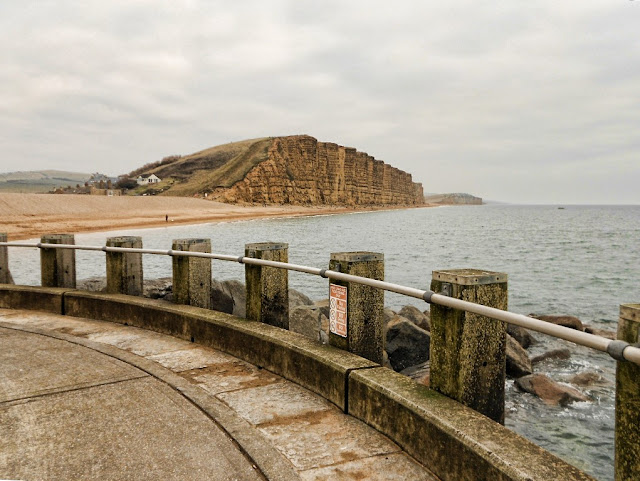 Not your usual fence  ,taken at West Bay looking towards  the cliffs.

5. Spiky.
This was taken  in  the garden yesterday ,  a rather prickly rose stem.A rather safe choice. 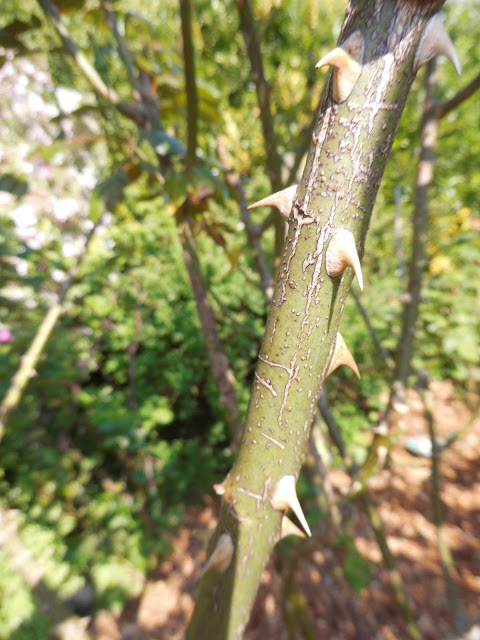 6. Own Choice.
Well this happened  a couple  of days ago  and just had to share.  The mud magnet which is Effie . 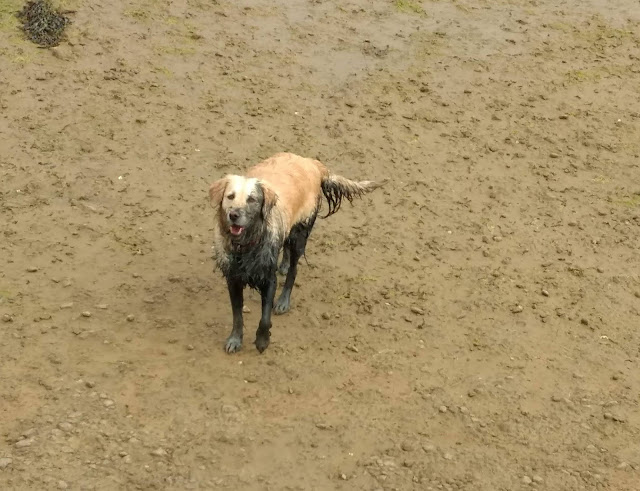 She found a bait diggers  hole and wallowed.  She was pretty pleased  with herself ,we had to laugh at her.
So that is my motley assortment of photos for May. Now off to see what you made of this months list.
Hugs Barbara.
at May 24, 2018

Wonderful photos, I'm sure I remember that fencing at West Bay. Lovely photos too of your dogs enjoying themselves. Thank heavens you were okay after the fall into the oven door:)

Threads through my life said...

Well at least, following your scan, you can say you have a brain. My Beloved does not think I have one.... Interesting photos but I have to select Effie as my favourite. Like her, I seem to find mud attaches itself to me. Why didn't I think of a rose thorn??? We have a blackberry called Himalayan Giant; it is a giant of a plant with thorns to match!

I do remember that scary day with your cooker and you. Oh Effie! Oh my.

Smacking your head on the cooker door is definitely not the best way to find out if you have a brain! lol. You don't say when you actually did it but I hope you've been okay since :) My favourite just has to be the very muddy Effie - my two sometimes get like that, especially Sophie as I can let her off the lead, but somehow it's all magically dropped off them by the time I get back to the van and they are back to being white again :)

I love all your photos as always but the one of Effie is just too too funny. She looks so happy that you just can't be mad at her for having fun. I am so sorry about the fall you took. So happy you weren't hurt too badly.
Hugs

What a fabulous picture of the Fence at West Bay! Effie must have been in doggy heaven.

Love your interpretations. Cool is very cool and I love the fence idea. Effie swimming and muddy Effie are my faves.😁😁

Certainly an interesting tale for disaster! A lovely collection of photos :)

Ooh your poor head!! ouch! But I love your 'cool' photo with the writing/reflections - what a good idea :) thank you for joining in x

I love all these, but the dogs are probably pretty much my favourites,though the letters in the water are "cool". Your disaster sounds very dangerous indeed & do hope you don't do that again. I'm glad I'm not the only who did a 'pop out yesterday' ob to get one of my photos. Take care & huggles.

Great selection of photos Barb.
That is one very mucky pup

Just what we all need - time to reflect, if only it was a easy as your great photo!

We had an Ollie who would swim at every opportunity, so I loved that picture, but your shot of Effie is priceless - as it was only two days ago and it's lovely and warm at present I'm guessing she had the hose turned on her?

Lovely interpretation of the titles. What is it about dogs and mud! I must say that is not the best way to clean the oven door.....smashing your head on it did get you a nice clean door. Glad you were OK.

Great pictures, love the last one. Hope you are OK after your accident

Dirty doggy .... I hope she didn't get in the car looking like that!
Love the reflection picture, that really is 'cool'
West Bay ... ah, I remember it well, such a lovely place.
Love and {hugs} to you both x

Oh dear - Effie looks thoroughly pleased with herself in that last pic - brilliant fun photo. I love all your pictures this month - the fence and the letters in the water - that's really cool that the reflection is the main bit. For some reason the disaster photo isn't loading on my laptop - really slow wifi where I am today, but I hope you are feeling ok now - cookers can be replaced. See you next month.

I can see why it was a challenge to fit some of the themes this month but I like your choices. The one of Effie after her mud bath made me smile.