How am I going to do this.One day at a time.

Sum up our Holiday to the Outer Hebrides in as  few photos as poss ,seeing as I took hundreds ,well lets  start  our journey by driving to sons early on the 11th May and  them driving  us to Southampton  for  the flight to Glasgow. I had visions of me standing in bra and knickers  going through the sensors. Took the belt  off my jeans for  it to pass through the machine, then they asked me to remove  my sweatshirt ,good  job had a tee shirt under it.  I was a bit  hot  and bothered by then as I imagined my jeans falling down so was clutching those, then  she asked me to stretch out my arms  ,by which time I  was thinking thank goodness the kids cannot see me now they would be in hysterics.So then she  frisked me , and let me through. Martin sailed through not even  a glance in his direction.So then  off to wait for  our flight for  2 hours. We have only flown on big  planes before so  it was a little bit of  a suprise to see a little propellor plane awaiting. We were  in the first 2 seats. A  young man got on who had the look ,someone famous maybe. The 2  young ladies opposite were  very excited ,he said hello  to  them and then took his seat further back  in the plane. One of them mouthed  at me  "Take That",I then  realised  she  was not being  rude it was a   member of    the   group Take  That. It  was lovely to see  how overwhelmed they were and we caught them  up in the  airport while waiting for  our luggage and she  said  he had his photo taken  with them.They were in Glasgow to  go   and see them in  concert. My  grandaughter was very jealous that  we  had seen  Marc  Owen. (Even if I had to admit I had no idea who it was).With  the events that have gone on this week in Manchester  I thought of how  all those   young  people  had  been like her  just so excited to   be going to  seeing  their  favourite pop idol and their lives cut short. Anyway we arrived at Glasgow airport in just over an hour  and walked  to the hotel ,2mins walk  away. The  Holiday Inn 7th  floor. We had  dinner  here and I had  a free pudding as  we  had to meet  the   holiday rep so  had  to forgo a  dessert.  I  had  ordered it  and  thought I  had  10 mins or  so    to  eat it.  It  did not arrive until  we  said  we  had  to  leave,  so  they said  take  it with you and  there will   be  no  charge.  Very impressed  with  that.  We met Kimberly and she  talked us through our itinery. I did  feel a little out of place ,sitting  eating a chocolate fondue with icecream.  We slept  well no noise from aircraft that seemed to be landing every few minutes ,we  watched for  ages the  comings and goings. 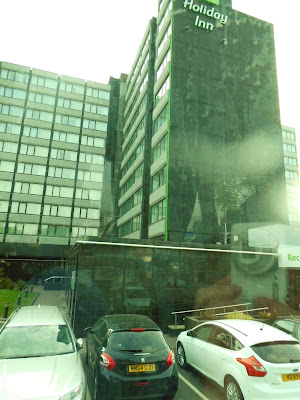 So bright and  early on the  12th we  boarded our coach ,driven by Steve and headed off for Outer Hebridean Adventure. Our first stop  was  Loch Lomond where we had 30 mins to stretch our legs.

A  bit of a grey morning but pleasant enough I  could give you facts about the loch ,but I won't.  We  walked  along the shore and into the little village. 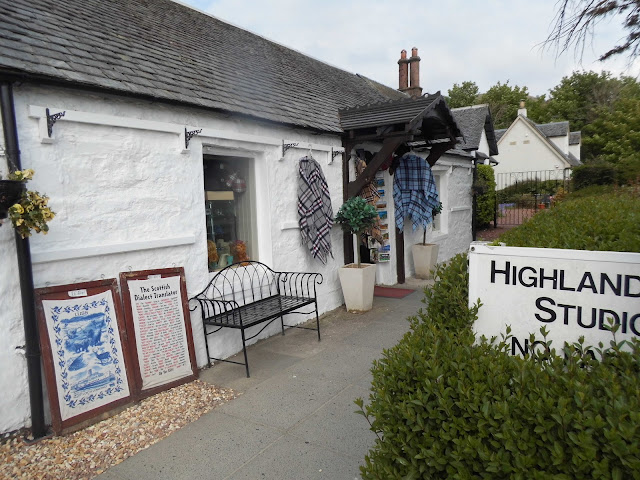 Would love to have visited  the interior but not  enough time. Lots  of Rhodedendrons in the gardens  . In colours I  have  not seen before. 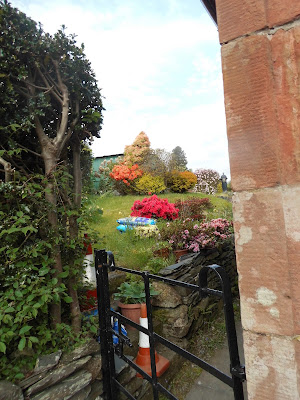 Leaving Loch Lomond we travelled  on  to  The  Drovers  Inn where we  stopped for coffee.Established  in 1705
d 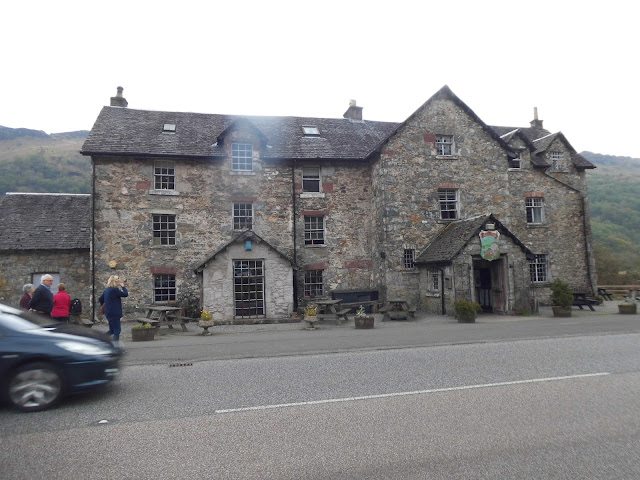 The top  very right window is  painted on ,due to a window tax.Reputed to be haunted  there is  a web site  you can look at  www.thedroversinn.co.uk/ghosts   . It really is old  in decor as well  as traditon . As you walk in  the smell  of woodsmoke greets you ,or perhaps  it was peat. 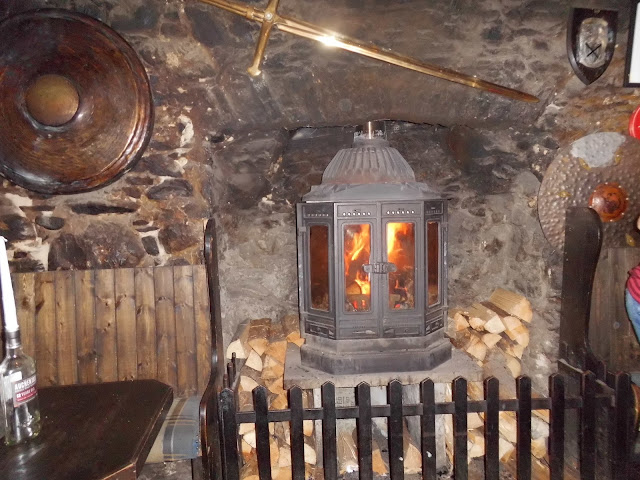 Down the years it has welcomed the great and the good through its doors,including Rob Roy MacGregor.One  of  the kilted bar staff gave us a  talk about the history. 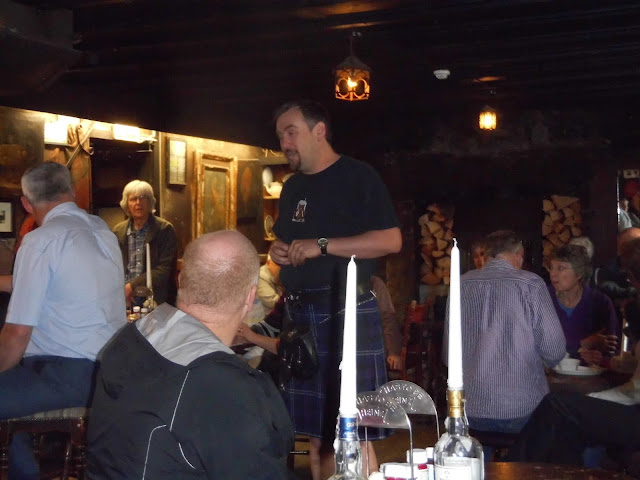 Then we were given the opportunity to visit the rest  of the downstairs rooms  . The  residents of which themselves  have become famous being  used as props in  various television series and film.  Steptoe and Son  had  this  bear  in  the corner of  the sitting  room.
A  bit gruesome I thought. 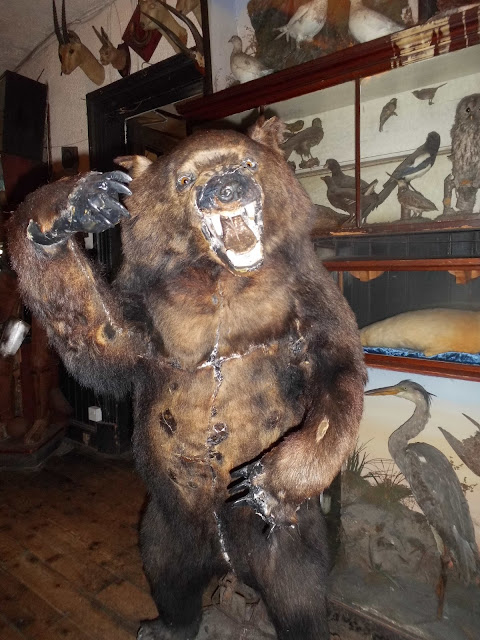 However the guy standing  next to him is ok. 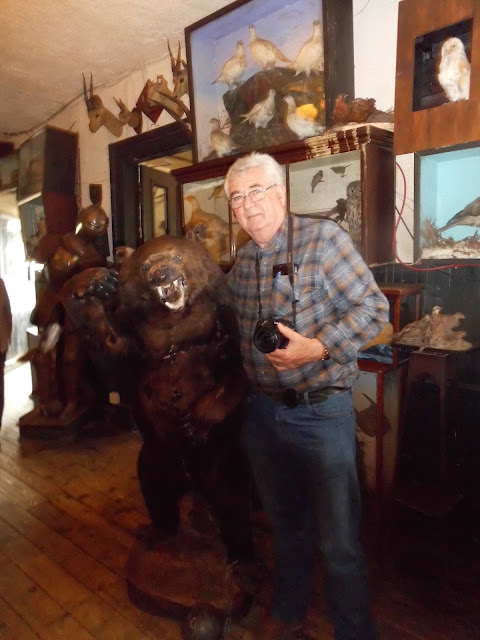 Now for the wolf. 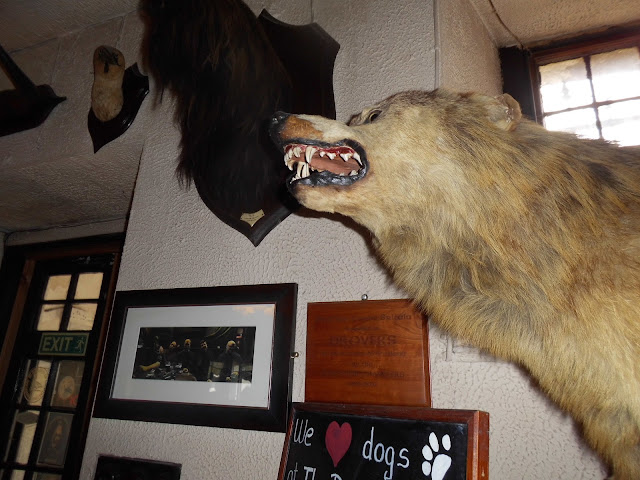 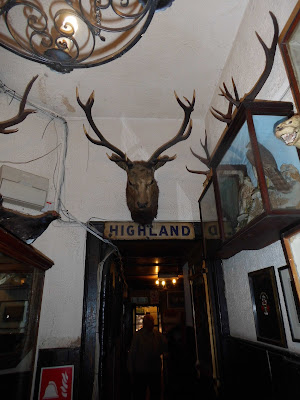 It was choc a  bloc with stuffed creatures of all  kinds, I suppose  in  Victorian times  it was the height of fashion to  adorn your houses like this. In fact  Martins   Grandmother  had birds  of all kinds  in  domed containers  all   over her farmhouse. A  bit off putting  I  feel. So leaving  Inverarnan we set off for  Oban to catch the ferry. 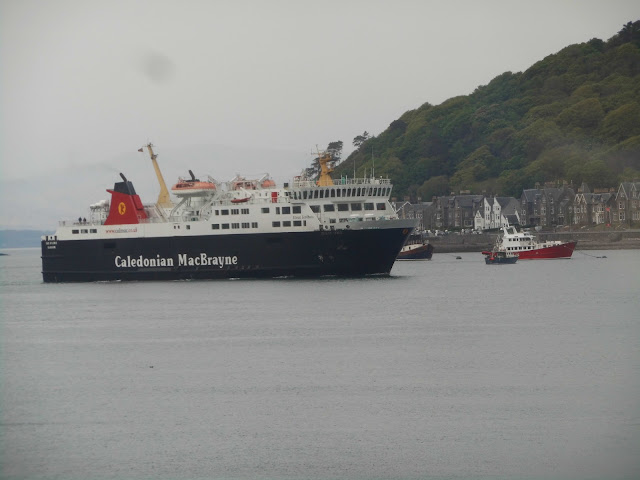 Leaving  Oban for a 5 hour  sailing to  Barra. 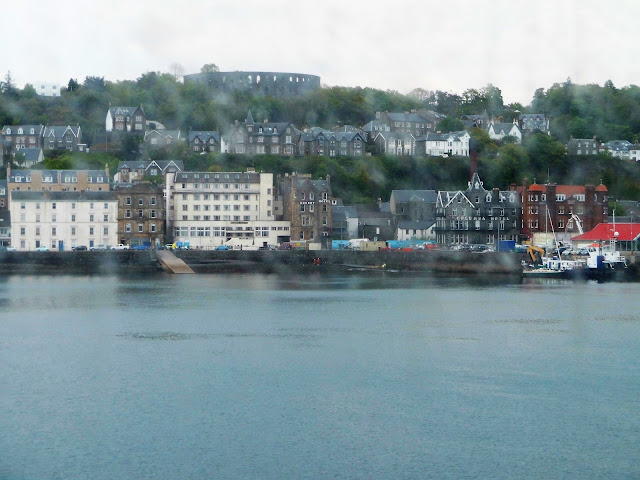 Not much to show you of the trip over. Sea bands  were on and  tablets  taken , I do  not  like boats ,much rather fly.However  it  was a very uneventful crossing  a few bumps  of  land in  the distance and lots  of sea. I  was so pleased to   get off the boat though.  Coming into   Castlebay on   the  Isle  of Barra. 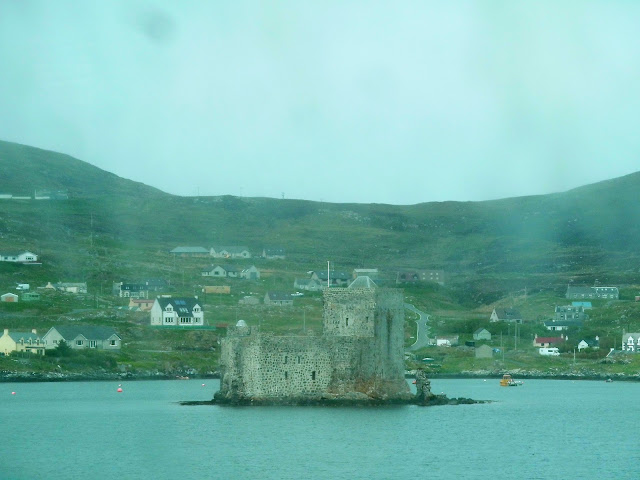 It was a short drive to our Barra Beach Hotel, and  yes it is about a minute from  the beach. We went  out after dinner to  marvel  at the colour of  the water and whiteness of the sand. 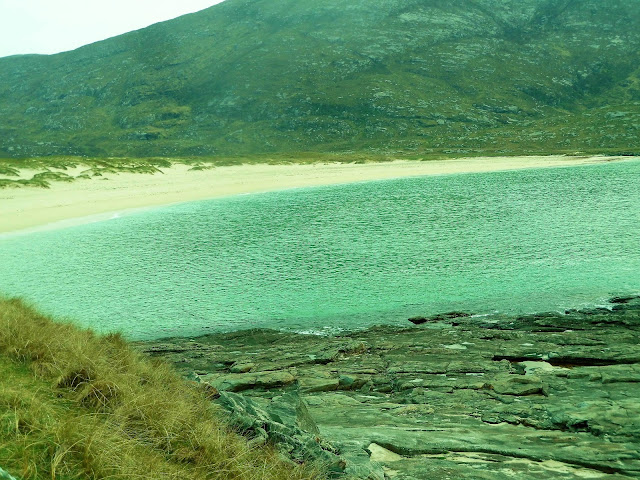 Yes the sea really was that colour. Where the grass was on the left there was SHEEP  and 2 dear little lambs. I was happy!!! 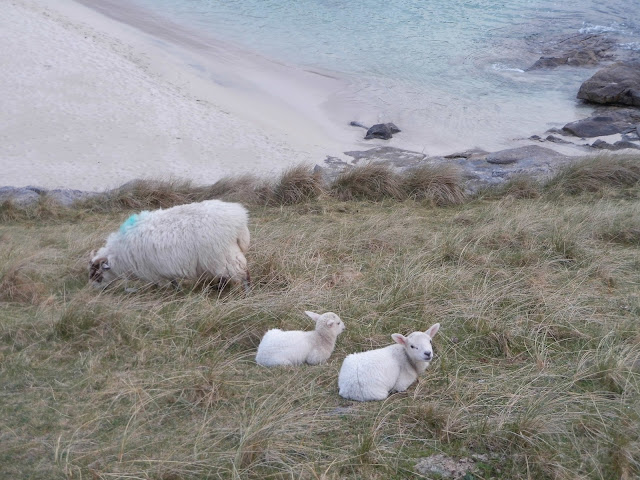 Of course we had to walk on the beach ,and I did it barefoot , well I had travelled almost 600 miles to see it ,so I was going to walk  on it.I have not done this for I cannot think  how many years. 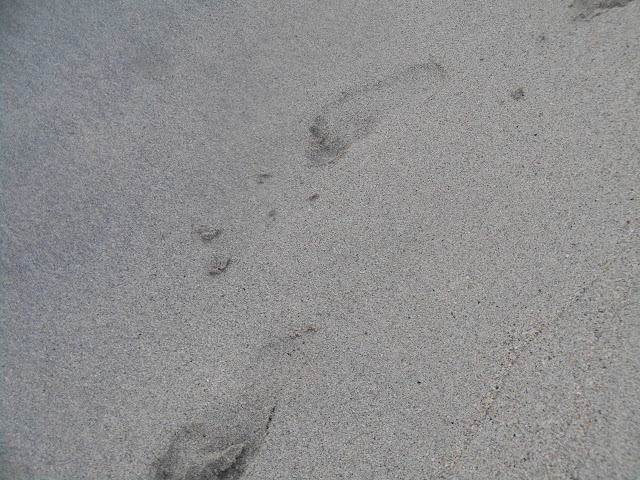 We sat and watched the sun slowly disappearing. 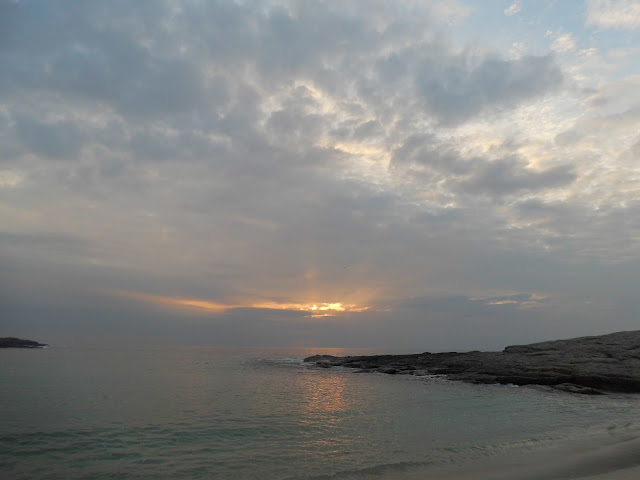 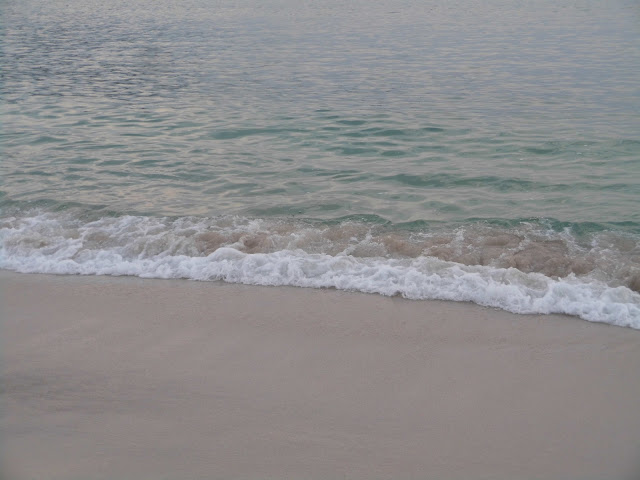 So we went back inside a quick drink then bed. 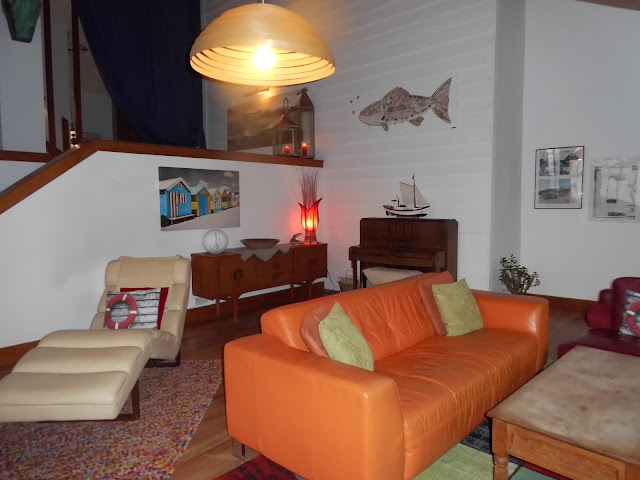 There I will leave you for now ,I will try and do another day tomorrow I will post a pic of Spring Makeover tomorrow too as I told Sally I would. So bye for now ,it you .do not want to see anymore of holidays then I will be stitching etc as normal as soon as I have updated these so I shall see you then .If you would like to leave a comment then please do ,I love getting  a little word  or two from  my blogging friends.
Much love and many hugs
Barb x
at May 27, 2017

Can't wait to see the rest of your trip, looks like you where having lots of fun. I too would walk on the beach after coming that far to see it. hugs

Holiday is sounding lovely so for, love walking on the beach, the sea looked so inviting if it was a, bit warmer, looking forward to hearing about the rest.xx

Much envy going on here! How wonderful to have bare feet on the sands x

Looks like a great rip so far Barb. Looking forward to seeing more.

Oh Barb this is just wonderful. Yes, I look forward to more!

Very nice. You didn't recognize Marc Owen? I never even heard of Take That!!

That looks like a wonderful trip Barb, looking forward to the next installment

Lovely pictures of your adventures, the sea does look amazing.
Love those ferries, they used to take me to visit my late Grandfather, you knew you were nearly there after and all night drive ....

Oh Barb your photos are amazing. It looks like you had a fantastic time. Looking forward to seeing more. Hugs xx

Looks like a beautiful trip
Sending you hugs x