Reloaded onto coach and setting off at 8 am we sat backand enjoyed the scenery, and what a difference a day makes.It was a glorious day and wall to wall sunshine.
On the road to the ferry at Barra to Eriskay. 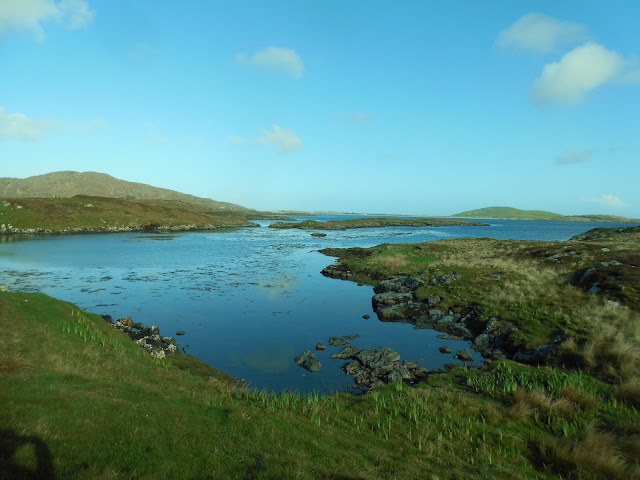 This was taken from the coach window.Our arrival at the ferry . Apparently it is a good place for seeing otters but he only ones we saw were carved wooden ones. 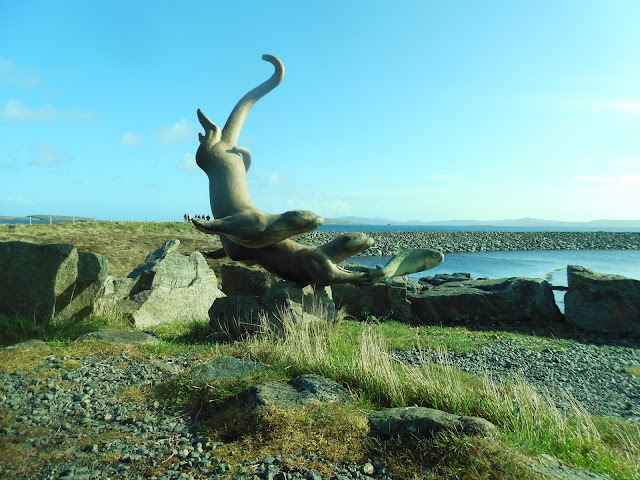 We had to sit in the coach while we  were driven aboard then we went up on deck to watch Barra disappearing and Eriksay coming closer. 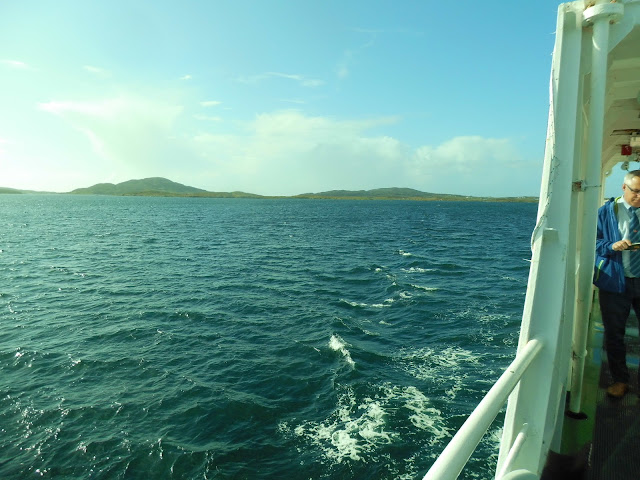 I almost had another dog as whilst on board there were a couple with 2 long haired dachsunds ,so sweet and I of course asked  if I could speak to their dogs. They were a pair husband and wife and the wife was due puppies in about 10 days. Oh if only. The owners did say I could put my name  down , but too far to go to collect  it. One day maybe . So we said  goodbye to Ruby and joined the rest of the group to disembark.
Eriksay is famous for its  wreck of  the S.S.Politician in 1941 which hit a submerged  rock and was breached in shallow water.The cargo  was about 21,000 cases of malt whisky.Given the wartime rations  and the slow response  of the authorities this was like "manna from heaven"  to the islanders.
Most of the cargo was salvaged and  the customs and excise officials  did eventually arrive,  some people were arrested  and  convicted but without the help of the local police.The film Whisky Galore released in 1949 was based on Compton MacKenzies book who was living on Barra at the time ,Barra was used for most of the filming and Compton MacKenzie is buried  in the churchyard I showed you yesterday. They have just released a new  version of  the film. 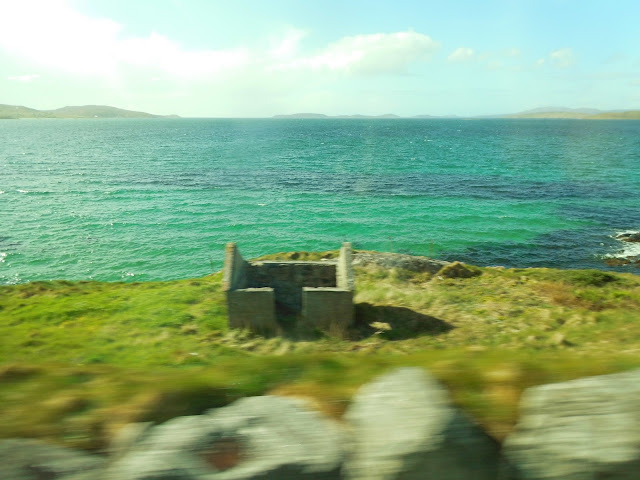 Sorry but you get the rushing by effect.We crossed the causeway into South Uist. A ruined croft by the waters edge, we saw lots of these and heard about how the people could not make a  living on the land and sea and  migrated to the mainland.Again though the colour of the sea had  to be seen to be believed. 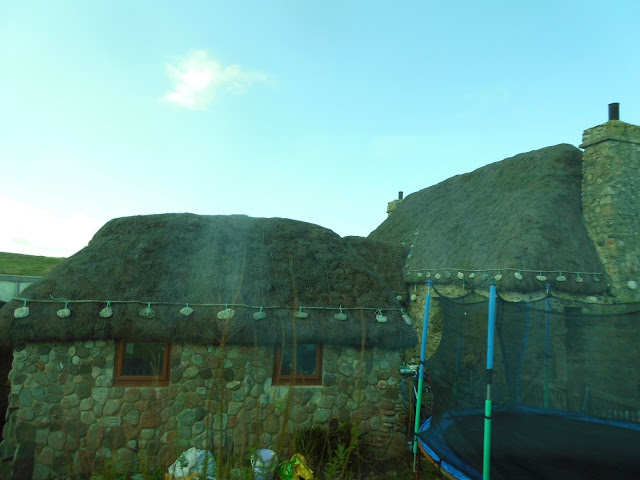 Another croft but with a trampoline in the garden looks out of place somewhat. We stopped here for a little while to  see the two churches on this site and there were  a few interesting  features. 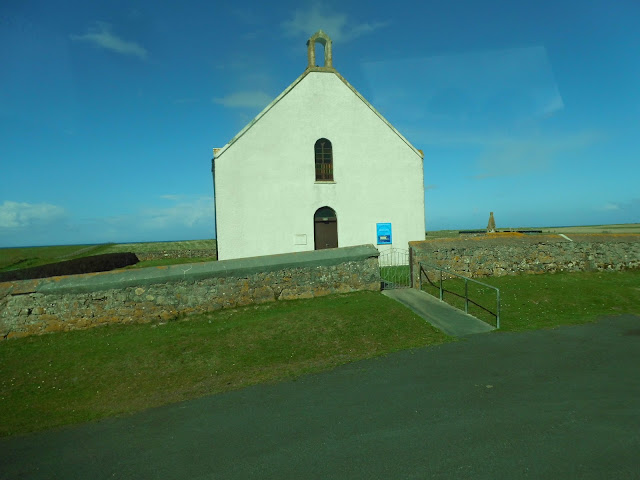 Originally these 2 churches were on an  island and joined by a causeway. The other one is  in a ruined state but I was looking for Lichen for one of my Scavenger photo hunt pics it was an ideal  site. There have been 4 churches on this site. 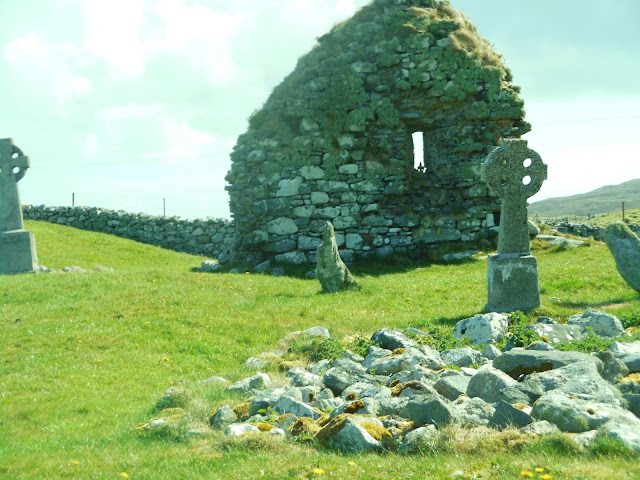 The rock nearest the built up wall was covered in lichen and just had to take a picture. 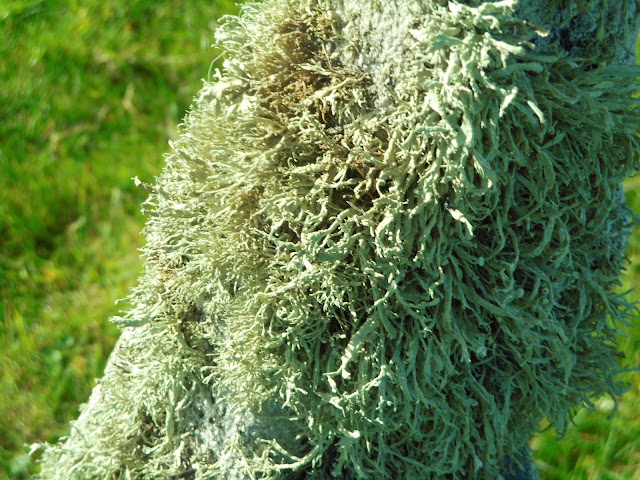 Loved the colour too. The celtic cross caught my eye too. 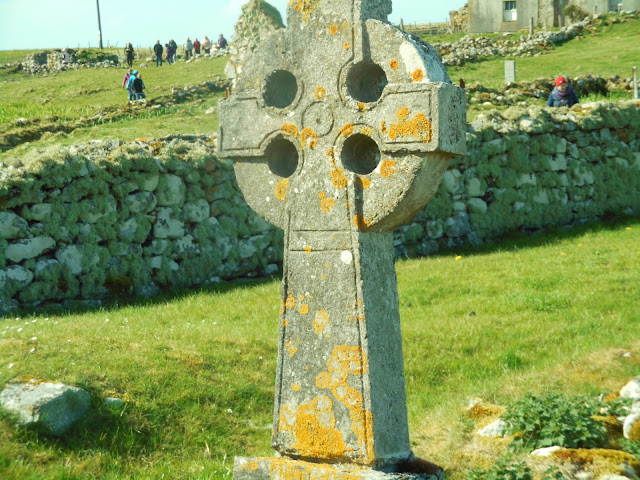 We then sauntered back to the coach passing a wall which had lots of bones on top. 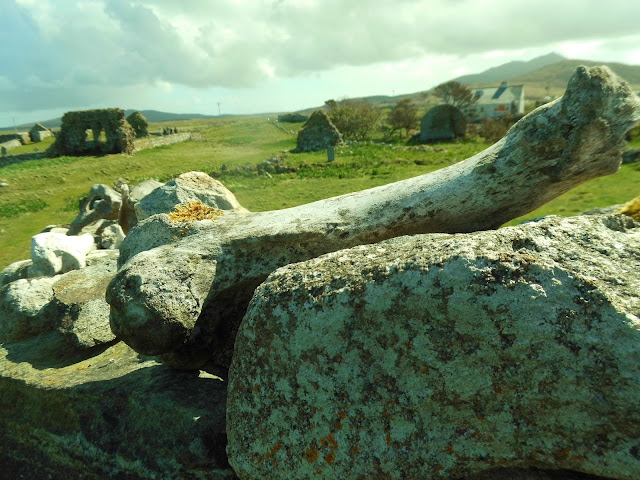 The cottage we  passed was  next to the youth hostel,to the left of the cottage. 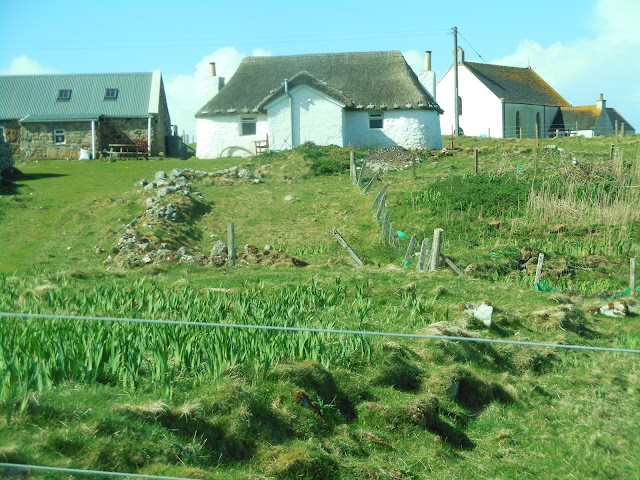 At the bottom you can see the iris which grows wild here ,we saw a few of them in flower and it must so lovely. 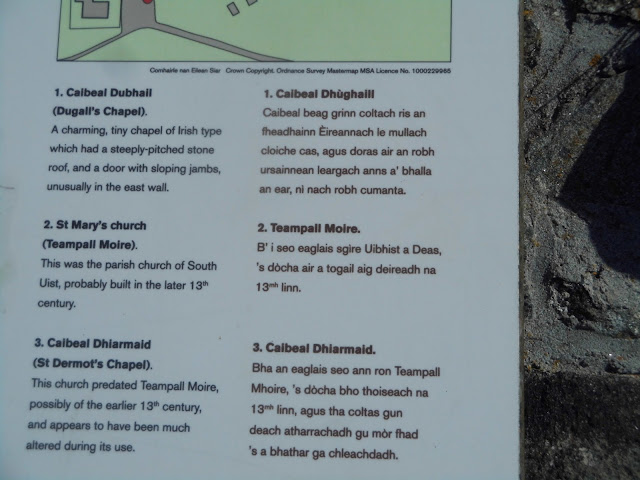 Again info about the place. 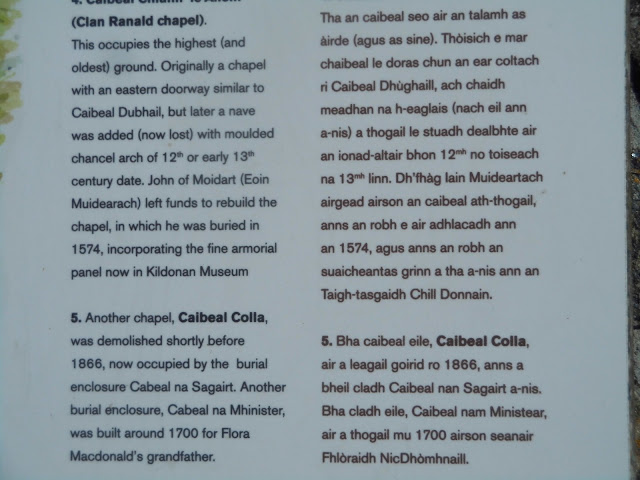 Make that 5 churches on the site, getting my facts wrong here.We boarded the coach and set off to have lunch and a coffee . A  packed lunch was collected  at the Dark Island  Hotel.
We sat outside and although it was windy it was very pleasant and the orchard next to the picnic area was alive with the singing of birds . 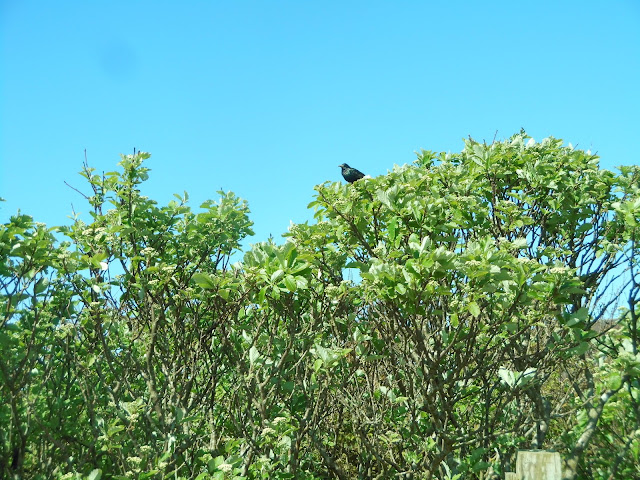 Not sure if they were  starlings  or  blackbirds but there were  a great many of them this one must  have been the lookout.Fed and watered on we  go. 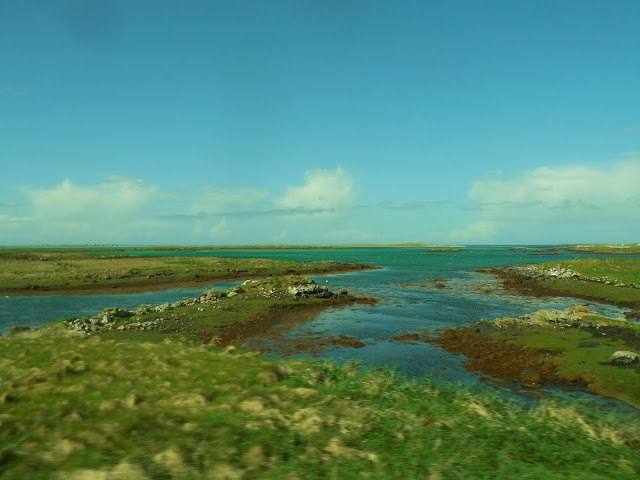 Just loved the colour and textural quality ,it only needed a sheep in the foreground. 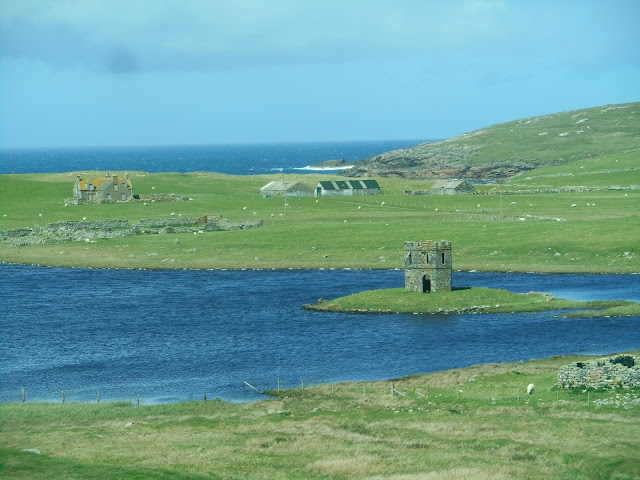 There is a sheep in the foreground of this but we were motoring and it was a case of quick take a pic and hope it comes out. We have now travelled through South Uist onto North Uist and onto Berneray onto South Harris ,all lovely landscapes and took far too many photos to show you them all. North Harris surprised us as after all lochs and flatness it became quite hilly and a totally different landscape.Of course the well known  Harris  Tweed  comes from  here. 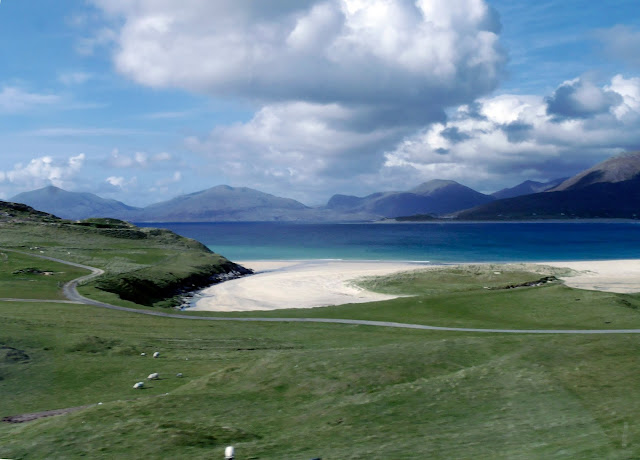 Isn't this a fabulous view.The long and winding road ,I am wondering if to get it made into a very large print for the lounge  wall, just need  some wall  space. 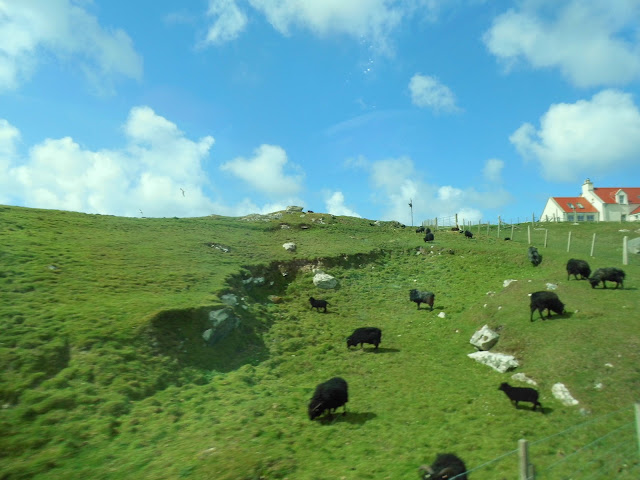 We did see these black sheep almost at the ferry over to Lewis. 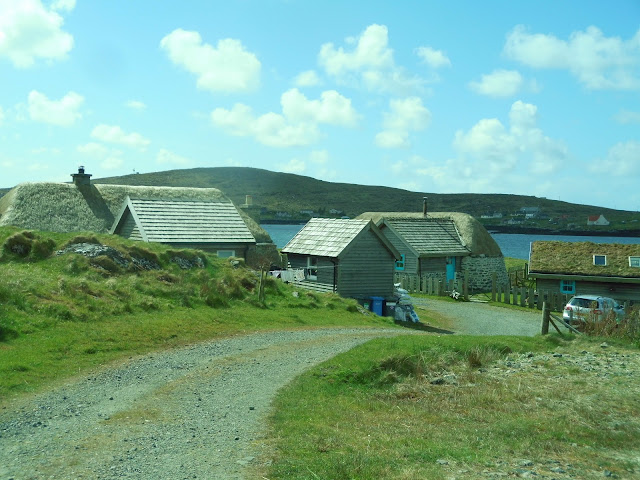 I  took these little cottages I quite  liked the thatched  one.

I took one of Martin outside but I   think the person that lived  there wasn't too keen and rapped on the window. I had  not  realised   it  was occupied.Oops. 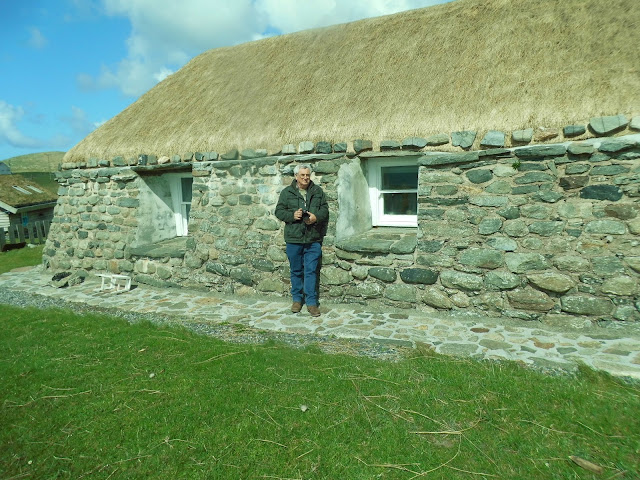 Back  on coach and off on  yet another ferry this time to the Isle of Lewis ,where we would make our way to Stornaway .Although it seemed a short way off by sight, it was  a very strange route as we zig zagged back and forth apparently to avoid rocks and shallow water.So we visited 7 islands in  one day. We arrived in Stornaway very weary and dinner was at 8 so exactly from 8 in  the morning until  8 at night  we were travelling and seeing wonderful scenery. We stayed in a 4 star hotel and by us it is  absolutely the best one we stayed in. I  think  most of us were ready for bed .So for day 3 I will say goodnight  and  it is a breakfast at 8 and  away at 9. I wonder what we  will see tomorrow.Hope you have enjoyed today.
4  more  days to go. Hugs.
at May 29, 2017

What a grand adventure, loving the pictures. Can't wait to see more. Do enjoy yourselves. hugs Lynda Ruth

Super beautiful
I love your photos so much
Big hugs x

Loving the journey so far. I seem to remember bits from the TV programme "An Island Parish" when it was on.

Loving reading about your travels, such amazing sea colours. x