Shall  we try again I typed lots in yesterday and must have pressed something and whoosh all gone despite saving it as I went. I thought I would have a draft copy but no completely disappeared. So the best  laid plan  was not to be. So  here we are in May and the header shows the Lily of the Valley that is blooming just in front of the lounge window. The scent is so lovely. I have forget me nots everywhere, they self seed and look so pretty. I took a few photos with my new camera, the old one finally gave up the ghost ,so maybe I  will  get some better pics now to share. I have one red hot poker out but it has 16 more buds so in a week or two it will be magnificent. 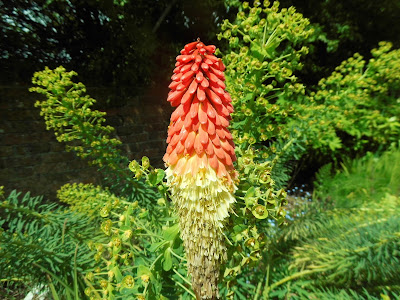 The euphorbia behind it looks lovely with the sun behind it. All these are in the front borders. 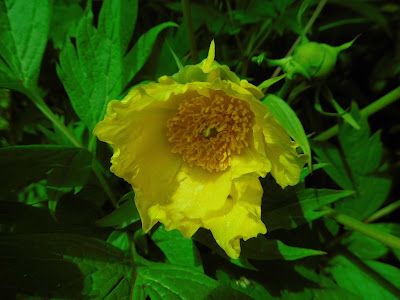 A yellow peony just about to open. and  we have 3 in bud, right up the top near the road we have 3 echiums which are very stately and attract lots of bees. 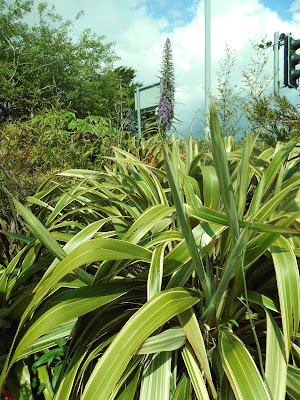 You can see one right at the back, the phormium in the front has 12 spikes on it. So that will be spectacular later , it looks like miniature bananas when  they  flower. Also in the front is this no idea what it is but it is very pretty. 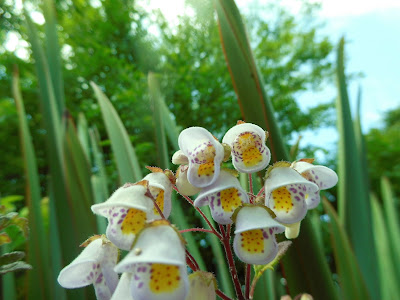 I did manage a close up of the echium not sure of spelling, but the bees wouldnt stay long enough for the picture. 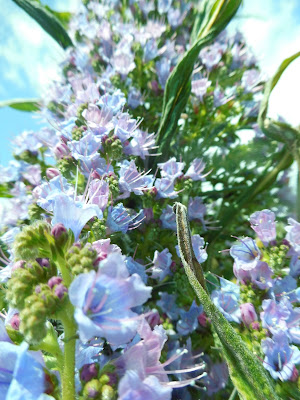 These are standing about 8 feet tall.The sky was blue when I took these ,but today is overcast ,since I last spoke  it has rained once. Even the grass  when Martin cut it today looked as  if it  needed a drink.We did an Ollie walk the other day , he is never far from our  thoughts , such a lovely walk the skylarks were in  full song, they nest in the fields where we walked twice a day.

The birds are emptying the 4 feeders we have on the apple tree every day now. We have 2 very fat pigeons that visit most days and the other day Martin  was telling Sam that his  grandma used to make  pigeon pie, you can imagine the face that Sam pulled. He did not think you could eat pigeon , to which he was told he was going to have one for dinner next time he called .. I have never tried  it and don't think I want to ...but for once  Sam was trying to get out of coming for dinner.
So this week, I have done  a little stitching not a lot as my hands and back have been playing up. I have had an appointment to see the Spinal  Centre Clinic Consultant on  the 24th May ,great I thought at last, then I found it is almost 100 miles away. Martin is not keen  on driving long distances  now but he has said if that is the only one in the South of England we would go. I cannot tell you how releived I was that he said that. DD said she would take me but to be honest she has so little  time off, with family and work committments that  I would not feel happy .The spring makeover is coming along I had  hoped to get the  dog finished to show you but that maybe next time  now. 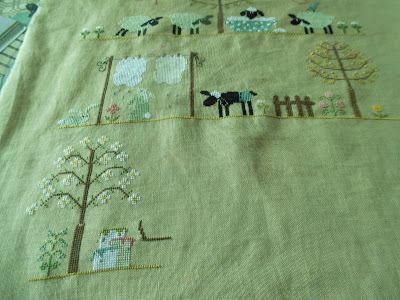 I will be sorry when this one is finished as it does make me smile.I have got P finished on Spring.Now onto R. 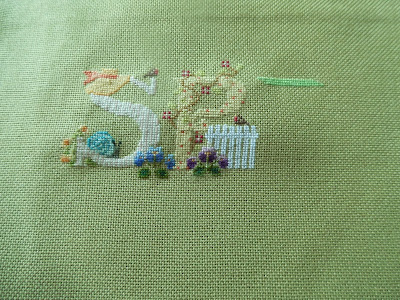 Jubilees sheep is growing  slowly ,and not much more  stitching has been done apart from Elizabeth Bennets dress which has  not got very far either . So those  will  have to wait for their turn to be shown to you.
I am feeling  like a  Harry Potter character , Dobby the Elf. Hmmmm  I hear  you say she has finally lost the  plot. I  have a    SOCK. 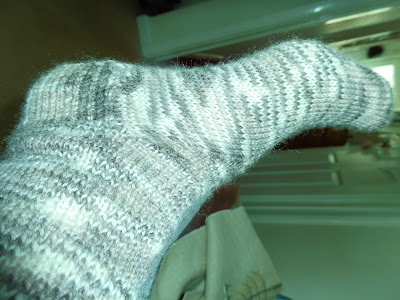 It fits !!!!Martin said the next one should be easier, hmmm  not sure about that but that is next on  the needles.So not completely idle. I have been reading though  and could not put a book down my daughter lent me . Entitled  The Woman  in Cabin 10 by Ruth Ware. It took me  2 days to read it ,I am now reading another of hers called  The Dark Dark Wood, which has me  gripped too. I will lend it to  Caitlin when I have finished it. I do not need any more  books  ,I  do not need anymore books ,I do not need anymore books,but when did I listen to that!!! .Books  bought this week. 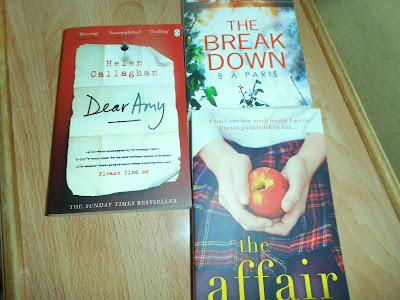 Amazon is really a good friend of mine lol. However we  seem to have another late starting reader in  the family, Caitlin  our 19 year old grandaughter has just found she can lose  herself in a book ,and has taken to reading in her lunch breaks. She has just read, me before you ,and loved it. She said she wanted to read more  of  Jo Jo Moyes books and so she went to  the library. They did not have any she wanted, and she was  surprised when I said  Oh I have all those on your list. Why she was surprised I just don't know ! as you all know I can  never have too many. She then said next time I will just come and ask  you Nan  , you have more books here. She went home with 3 to borrow. In the supermarket yesterday I saw  one I thought she might like ,but I will read it first. 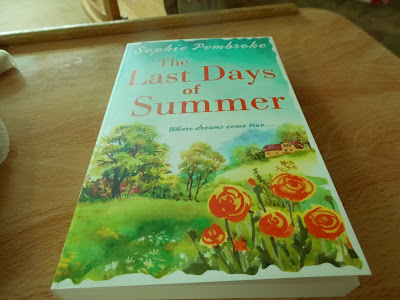 Martin also picked  up 2 by authors he likes, he is a great reader too. I put this in  the basket as  I thought I could "read" it whilst stitching. 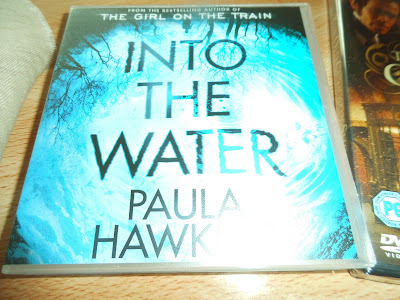 It was only £10,99 which for  a talking book is a bargain. I also picked  up this as I love Charles  Dickens. 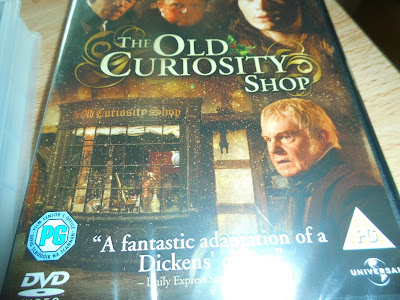 Then the next thing that arrived was one of the Silver Creek charts  that I ordered. The other one is on order as she had sold out. 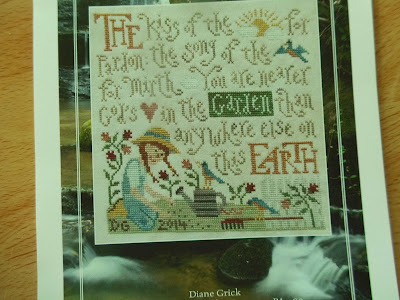 So that is all my purchases for this week. We did go out for a cup of tea and a slice  of cake on Thursday of this week. We went to a cafe which has a courtyard sort of garden and I took a few pics for you to see. This a door that is propped  up . 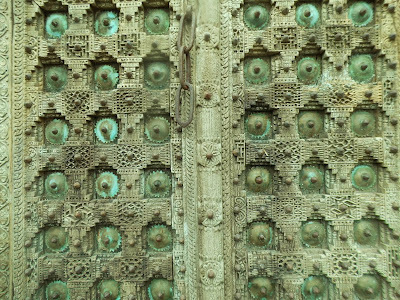 Just loved the colour and ornateness, is that a word, I have never been so do not know  really, but it reminds me of Morroco. The archway into the into the enclosed garden. 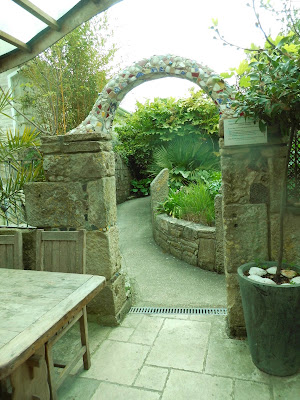 You would not believe there is main  road outside ,a little  oasis in the middle of Portland.The wall I loved , it reminded me of the saying A fish out of water. 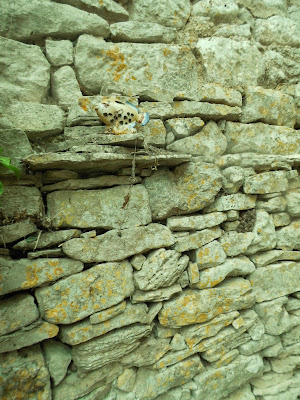 Can you see it ,he is well camoflaged . Took lots more but too many to show you here. The greengrocer reminded  me of bygone days when produce was displayed like this. 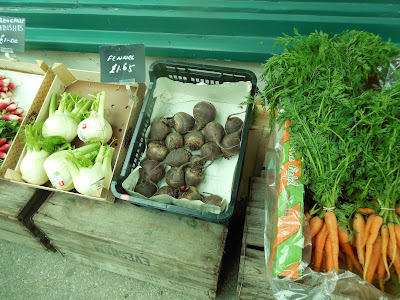 Inside were hessian sacks containing all manner of lovely things. Yum.
Then while we were driving home  across the  causeway just had to stop and  show you  the  sea pinks that lined  both sides of the road, only in May do you see these in flower, 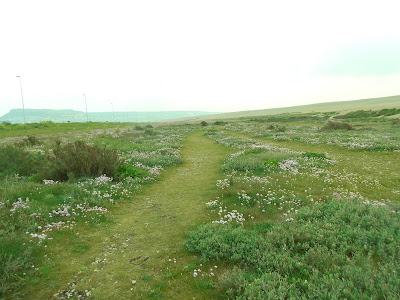 This is taken  just off the road to Portland which is in the distance, Chesil  beach on the right. 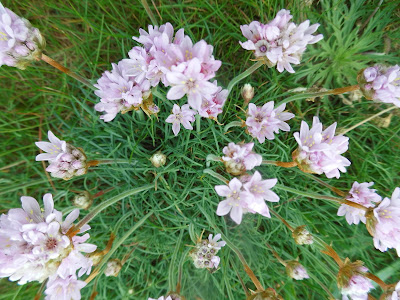 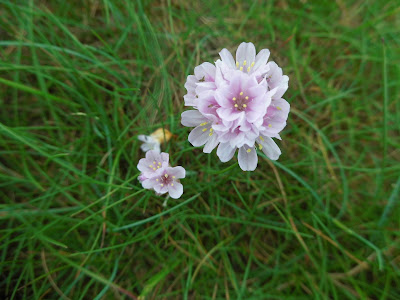 So that is all for now ,until next I have an update for  you I will leave you with thanks for leaving me your comments, and now I see I have  200 followers ,feeling quite humbled.
Take care all and if you are travelling safe journeying,keep well and I will speak again soon.
Much love and many hugs
Barb
at May 05, 2017

Barb what a wonderful post just buzzing with the energy and excitement. Your enthusiasm for stitching, reading gardening and visiting tea shops is quite infectious. That tea shop in Portland looks very familiar. I think we visited it ourselves a few years ago . It's a lovely place. I love the pretty sea pinks. What a lovely pathway they make .
Your garden is looking so pretty and you are ahead of us. Our peonies are still plump red and pink buds bursting out of theit green dresses. I have never seen a yellow one and need to keep a look.
I'm sorry you've not been feeling too good, dear twin. Backache is miserable and now you have to travel a hundred miles to get to see a specialist. That doesn't seem right but, as you say, if you have no choice you just bite the bullet. Hope you get some relief. Xx

Your garden is looking lovely Barb, and your stitching is coming along beautifully.
Great sock, I hope you do better than me and finish the pair, I have still only ever knitted the one sock!
I love the sea thrift, it seems to be able to grow in the most inhospitable cracks in the rock.

Barb, I envy you your garden of beautiful flowers. They are one of the reasons I would love to come to your side of the pond.....stunning English gardens. I see you've made some progress on the sheep....lovely. I also have that sampler in my "to do" box. I've loved it since the first time I saw it.
Blessings my friend

Your garden is 'blooming marvellous' and looks delightful.
YAY .... a sock... roll on the next one lol.
Nice selection of books, you'll be able to chat storylines with your lovely granddaughter. Have you bought the new Barbara Erskine? I see she has a new one out.
Nice stitching.
Hope you are having a lovely time away and the back is not causing you too many issues.
love and {hugs} xx

Your garden is looking lovely. It makes me wish DH was into flowering plants rather than shrubs.
Totally agree that you can never have too many books :)

Great post Barb, beautiful garden someone has green fingers.
lovely stitching and those books look good to read , have a good week hugs.