I have not been sitting twiddling my thumbs honest. So I thought I would try and do a weekly update. As you know Monday is Shepherds Bush night and here is last weeks progress with the Tiny Garden Roll  with Sally and Colleen ,we are off to Sallys tonight to sit by the fire in the comfy chair (that is if Colleen does not get there first). If you need to see where I was last week you will have to look at previous post. 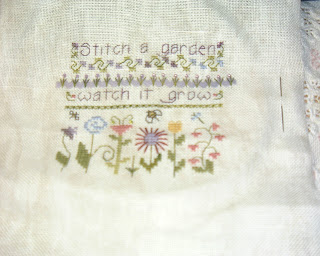 It is really pretty. 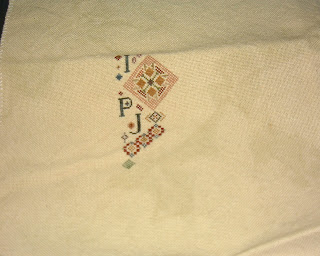 Tuesday is UFO night and I have restarted work on my Quaker Diamonds by Rosewood Manor ,I am doing this on Sassys Fabric over one. I have taken a before and after pic for you on this one as it is a year since I put this in the box of abandonment,just did not think I had abandoned it for that long. 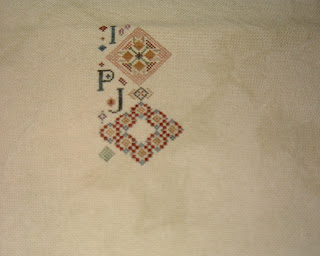 Wednesday is Parlour night over at Needlecraft Haven with TSG . This is Claras knitting design from Tanya at the Sampler Girl and today I noticed there is a nice free design on her blog put up today. 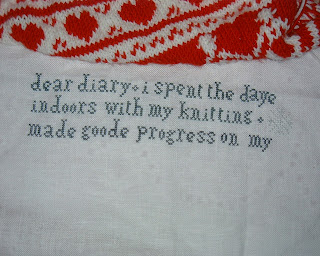 Thursday and I have spent some time with Elizabeths arm , I was not sure if I liked it on the darker fabric ,or more to the point I think I cut the fabric too small so have now got 2 arms on different pieces of fabric lol.Whilst speaking of Elizabeth does anyone know of anywhere I could get the rest of the Carriage House Samplings girls as I think I may like to do the others too. 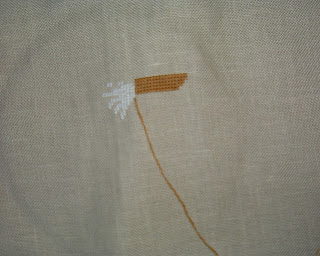 This is the first attempt and now the other one. 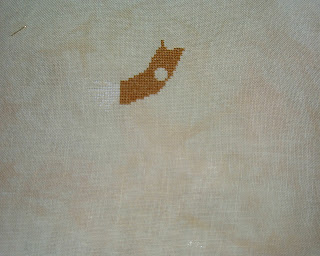 Friday is Christmas night and here is where I have got to on my Santa. 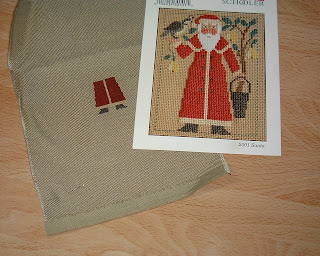 Looks a totally different red to the picture but I did use the colours suggested. So that was my stitching week and then it was the weekend. I have done a little more of my red and white knitting and only 16 more rows off finishing the front ,thankyou so much for your kind comments on this. 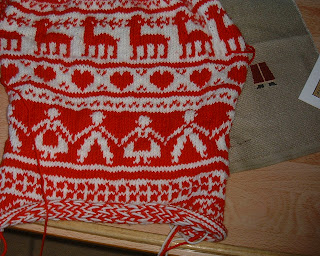 The back is plain so I will not be boring you with pics of that. I shall show you it all finished at some point in time. I also had a little play with needlefelting and here is someone I named Goldilocks. I still have to pluck up courage to do her face. I must admit it felt a bit weird needlefelting her as it was a bit like sticking pins in a voodoo doll, not that I ever have done that ,I just did not like it. 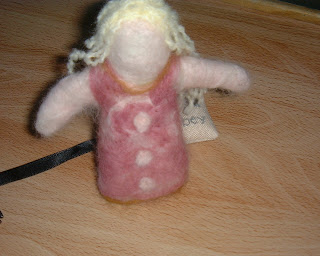 My other half Martin has been tinkering with the glass, before Christmas I asked him if he would make Jane of Buttons and Stitches a suncatcher of a lop eared bunny . He took it to his glass group to finish it off and held it up for the others to see and whoops!! he dropped it. Mind you there hangs a tale , mentioning the R word on Portland is considered to be ill luck. One of the ladies said to him, Well you should have known better to bring one of those onto the island. My dad wouldn't go fishing if the R word was mentioned ,you can say bunnies though.Anyway I digress, he kindly made me another one to send to Jane and if you go look at her blog you can see it hanging in her window. So that is the handiwork for this week. Yesterday ,Sunday, we went to Graeme our sons for an almost Christmas dinner (as we couldnt make it on the day) and to celebrate his birthday ,tell me how can I have a son who is 44 today. I did offer him a phonecall at 3.40 to wish him a Happy birthday but he declined . Anyway Caitlin our grandaughter (when she found out we were going asked her Uncle if she could come too)she gets on so well with Ella Graemes daughter. So we picked her up and drove to Graemes. We had a lovely time and meal ,they had made duck in a sour cherry sauce which was rather nice. Loads of veg and crackers as well. 3 desserts and then Martin Graeme Ella and Caitlin went for a walk in the woods at the back of Graemes. Oh almost forgot the one who needed a run in the forest Ollie went too. 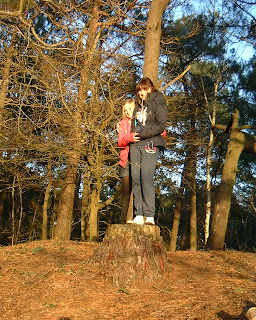 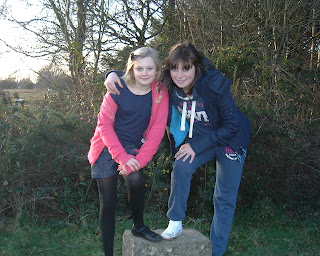 Ella is on the left and Caitlin on the right. Ollie loves going to Graemes ,he adores the forest and has lots of fuss and playtime. 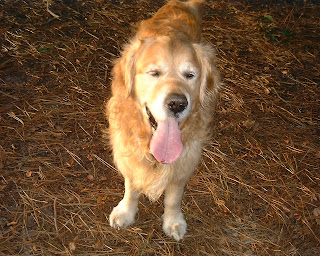 Looks like he enjoyed it -yes? So that was my week and last night when we got home the dreaded cough started, I do hope it does not think it is coming back -I do not want it. So off now to prepare for an invasion, Kate has to go to Caitlins open evening an so they are all coming here for a fish and chip supper ,just hope I get some time for stitching with S&C . I will see if I can get the boys to sit still for a pic later. Take care all ,thankyou for your lovely notes and comments. Will try for an update next Monday. Hugs n stuff Barb.x
at January 16, 2012

Some great pictures of you all. Your WIPs are looking fabulous xx

Lovely pictures of you and your family. Great progress on your stitching.

Lovely pictures of the family and your stitching and other crafts are looking great!

Beautiful progress all over. LOVE those Quaker Diamonds. And of course Elizabeth.
I think you can get the complete serie at http://www.traditionalstitches.com
Other shops might have them too.
I have the complete series as well, these charts are so lovely.

You've been busy! Great progress on your stitching, QD is stunning and your knitting is beautiful. Lovely family pictures too

ooooo can I join you all by the fire as its blooming frosty here ,,lol
well done on your stitching and your knitting it fab and oooo nice wee doll there .... hubbie's R to Jane is fab .. simply gorgeous :)
looks like you had fun on your walk .. Bentley can't wait to come and join Ollie ;) love mouse xxxxx

You have been a busy bee Barb. Lots of lovely progress. It was good to see you and Colleen last night :)

Lovely family photos and Ollie is as cute as ever:)

I saw Jane's bunny that Martin made for her. it is so sweet!

Super progress on all your projects, can it really be a whole year since QD was out?
Awww the bunny is adorable, well done to Martin.
Ollie and the girls look like they had a fun time at Graemes, belated birthday wishes to him, so pleased you were finally able to get there and have some family time.

Sorry I stole you comfy chair by the fire at Sally's last Monday. It was delightful to see you & Sally to chat & stitch. I just remembered, that SAL is at my house this Monday...I have to dust, so you can't write you name on the dusty tables....LOL. Love all your stitching, wips. I LOVE your knitting. It is beautiful. Super pictures of the Grandgirls! Of course, Sir Ollie is Handsome. So glad he could enjoy the countryside. Please tell Martin his bunny for Jane is beautiful. I saw it on her blog....his artwork is lovely. Hope you are on the mend. I'm on my second course of antibiotics for this crud I've had since Christmas.
See you Monday at my house! Hugs

Much like a magazine or craft book I scan the pictures in your posts then come back later to read all the news & updates!
You latest SB piece is looking fabulous, love the santa - I know what you mean about the colours being different IRL. Knitting is looking fabulous and your Goldilocks is gorgeous.
Saw the bunny on Jane's blog - well done to Martin as it's fab. Thanks for sharing all your pictures with us.

Beautiful pictures and I love the stitching you have done !!

Lovely family pictures Barb and as always such beautiful stitches. Love your red knitting and goldilocks is sooo cute!Hugs.