Today is the day

I start the SAL with Sally ,Return to the Sea by the Sampler Girl, so to prove I have started today I have put todays newspaper next to the first 5 stitches. So updates on this may go on a while lol. 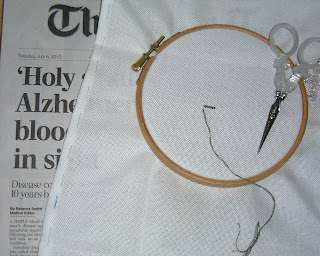 Another pic of threads and design.I am using threads suggested but stitching it on white 28count Joblean .I was going to use the ivory but decided as it has to match Staying Home (the other side of a mirror) , I would use the same fabric 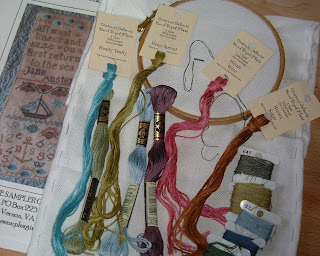 Just love those colours of silks.
I seem to have been a while away from my little blog, no real excuse just did not think I had anything much to tell you about, although when I get started it is amazing what comes to mind.
Since last I wrote Jack has been made prefect and narrowly missed being head boy, he hopes he may be chosen for sports captain but I suppose he will know soon. It doesn't seem possible he will be in his last year at this school,or that almost 16years ago I was saying to Iain that it was all over and he had a son. He couldn't face being with her !!!hmmm least said. So mum did.
However it was rather special just her and I.
So now he is growing up and although trials and tribulations of teenage years have raised issues he is settled again and hopefully if things turn out as he plans he has a good future. He has just been accepted to do work experience at his old primary school,as he hopes to become a teacher ,we will see what he thinks after the 2 weeks.
Ella has just been in a show which unfortunately we couldnt go to, it was Thriller the music from Michael Jackson. She was a zombie and various other characters.
Sam our 8year old went to roman hill fort the other day and whilst out was telling his friend about some fossils he had found with his grandad the night before, and also about the things Martin had told him about the dig that he was on a couple of years ago. Only in an amateur capacity I might add. Anyway Sams friend said in earshot of Kate, I wish I had a grandad like yours he's cool, and he knows lots of stuff about fossils and all sorts. I think that is the only time my dear husband has been called 'cool' in his lifetime.
All the others are fine and looking forward to the summer holidays.
Talking of cool, here is my wintery ufo project Generosity. Not progressing as well as I would like still trying to find the missing mojo. 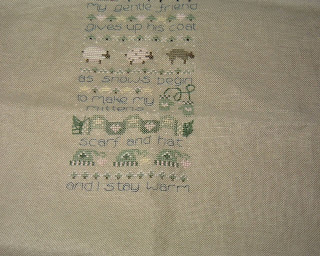 My mojo keeps making an appearance in fits and starts ,bit like the Scarlet Pimpernel,I seek it here ,I seek it there.Talking of Scarlet how about this for a touch of red. 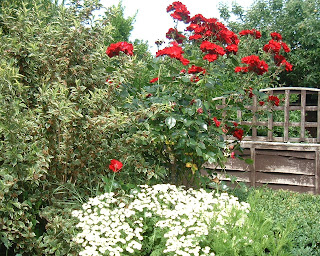 Think I shall have to attack that trellis with a paint brush!

On the subject of gardens thank you so much for all your comments about the garden, I could show you the wild bit but I don't think I dare!!!

Anyway if you want a flower fix here are a few that are in bloom at the moment.
Amber Queen. 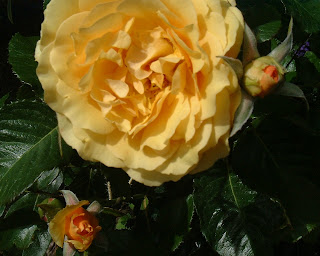 This was a rose bought for us by mil last year. 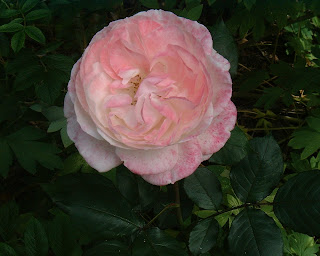 , That one is English Miss I bought that when my dear Mum died 10 years ago, it only has that one stem with that one bloom on this year. I am hoping I won't lose it. 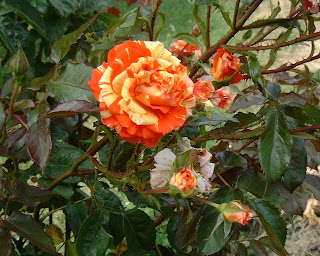 This one I haven't a clue what it is called,we have had it years and although it is still in the same tub we planted it in,it has rooted into the earth beneath and so if the pot splits I do not know what will happen to it.
Sorry I have gone off on a bit of a ramble here (not another rose groan!).No better get to the stitchy stuff, I have no finishes that I can show you,so no dancing again Heidi, as the one I have finished is for a friend who reads this so you will all have to wait for that one.
I do have some wip though if you would like a peek. 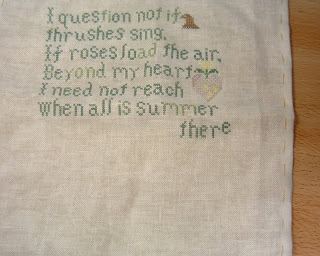 This is progress on Beyond my Heart summer sal with Blackbird designs group.
Then of course QC, about half of page 4. 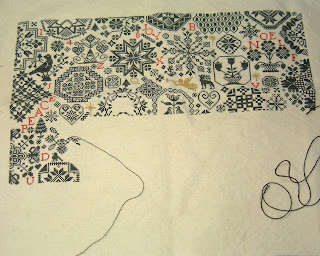 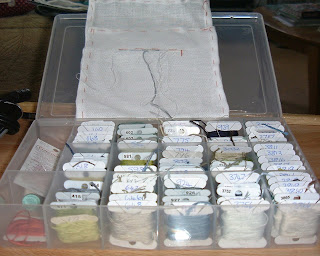 WHAT IS THAT i can hear you say well,it a rather dreadful pic of progress on an HAED storykeep Sal that I have started along with all the threads ,crikey that will keep me cross eyed i think.

I have been trying to keep my hands mobile and sort of knitting, I say sort of as I am not very good at it nowadays, I thought I would knit this for mil as she loves bears and has a VERY large collection, her favourite colour is lilac too so I thought this little bear could have a lilac dress. I dont know if I will be doing anymore! although there is quite a cute hiking bear,with a rucksack. 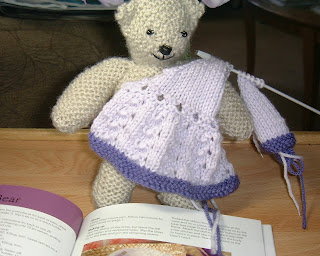 On Friday we had an evening out ,it doesn't happen very often as I never know how I am going to be ,but threw caution to the wind and went and saw the Fureys. 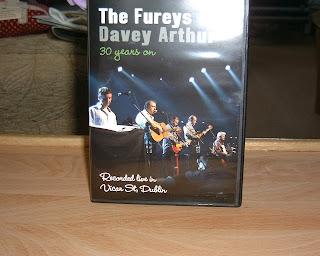 Of course Martin had to have the DVD and a double cd, I think he has nearly worn his old ones out. They were very good and we really enjoyed having a night out together.If my Irish friend Anne is reading this ,we mentioned Balbriggan and they said the traffic was awful lol.
So my friends that is all my news for now ,oh sorry forgot stash, only one item apart from DMC threads and some white fabric which I wont show you ,but here is the item from Blackbird Loose Feathers last design I think .Front and back of Hedgerow Birds. 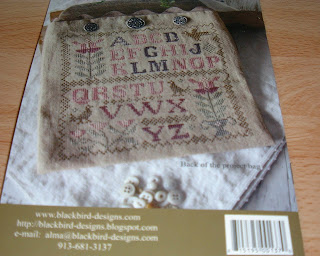 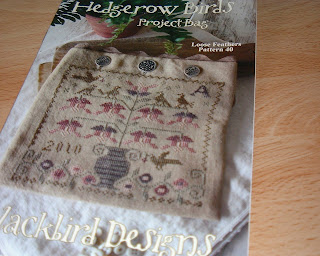 A little something for all of you who come and visit my little corner of cyberspace and sometimes say Hello, I love getting the comments and you are all such nice people. So from me to you a little bunch of sweepies from my garden , if you sniff hard you may just be able to smell them lol. 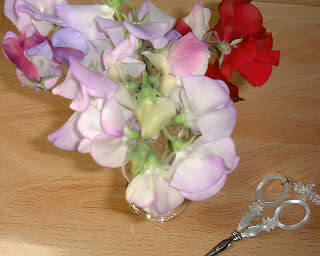 Bye for now , take care and whatever you are doing this week enjoy your stitching.
Hugs n stuff
Barb.
at July 06, 2010

Even 1 stitch makes it a new start! LOL It's going to be another really nice one too.

Lovely pics of your roses, i hope the rain doesn't spoil them, i saw on the weather its down your way this week, please send it up here, my allotment badly needs it.

Nice to see the UFO out, Mr Stick will be giving you a brownie point or 2 if you stitch on it this week.

mmm sweet peas, i'll go and give mine a sniff, you can't resist can you, although the scent i the room when i come downstairs in a morning is heavenly.

Love the teddy, the lilac dress will look fab, MIL will love it

Lovely pics ,and thanks for the sweet peas. My Dad always used to grow them , very successfully but I've never managed it . Last year I planted three packs of seeds and not one came , so I didn't try this year . X

Very nice WIPs! And the flowers are beautiful!! I may have my sis take a peek at your blog to see if she (the florist that she is) knows what your mystery rose is.

Thanks for the sweetpeas Barb, I love them, always used to grow some of my own in the garden when I was a child. The roses are lovely too. It's nice to hear all your news and your WIPs are lovely, I will enjoy following the SAL.

I know where your mojo is! It is in the garden smelling all those roses. Lol! Now no dancing on your side is okay since we will be tired dancing on mine again. Your next? I love doing SALs and hope you have fun with the one you started.

You have a pair of Sajou scissors! Wow...they are beautiful. I have one pair (not these) and never took them out of the wonderful box they came in...lol.

Guess what today is??? It is Christmas in July! My quilt group has a special party tonight and I am bringing down the two small Christmas trees I have in my studio. What better way to escape the summer heat (and boy is it hot) than to celebrate Christmas. Now all I need is a little snow......

Great stitching as always Barb. I love the colours for return to the sea.
I know what you mean about your mojo, mine wandered off into the garden a few weeks ago and I haven't seen it since!
By the way, I think your mystery rose is "Oranges and Lemons"

Maybe your Mojo has ran off with mine!! I do love your flower pics, One day I will have flowers in my garden, it's just not practical at the moment. I am so tempted to have a new start!!!! must be good.
What a fab teddy!!

Your roses are beautiful. I haven't got any sweet peas but yours look great. I can't wait to see your progress on your SAL. The colours look gorgeous I hope I am not going to want to join in lol. Lovely stitching and knitting. I am very sorry but I have space on my wall for my poppy too but thank you for your lovely comments.

Beautiful pictures of your roses! I am really jealous as i love roses and tried these last years on our back garden but i think it is too windy for them.

Hope you are enjoying the summer!

Lovely stitching as always Barb. I started the JA on Monday and am loving it already. I'll be popping a piccie up either today or tomorrow :)

Lovely pics of your roses and those sweet peas are gorgeous. I love the smell of them.

I asked my sister if she knew the variety of that last rose and unfortunately she did not. She said (and I quote) "there are over 30 million varieties of roses", LOL!!!

She did go "ooooh" and "aaaah" at the pics though.

Your flowers are just gorgeous!

You've got a wide variety of WIPS on the go!

Your roses are exquisite and your stitching is lovely. I love the Hedgerow Bag - it looks fabulous! I can almost smell the sweet peas too!

You have a lovely garden. Who designs your winter project that you have on the go? The one with the sheep.

I had no idea it had been this long since last visited your blog - bet you wondered if I was ever going to turn up again! Off now to have a big catch up... I might be gone for some time! LOL :0)