My oh my what a wonderful day!

We had yesterday,just had to write and share it with you.
I was virtually pain free so we decided we would bite the bullet and do something we have been planning for ages. We had a quick breakfast,and then we drove into the wilds of Dorset. Well an expedition for me anyway, we have been researching our family trees and my Paternal side were all Dorset/Somerset people. Anyway we had found out that in 1773 my 2x great grandfather was baptised at a small church about 25/30 miles away and in a place we didn't know existed. So armed with a map and info we had, we set off. We arrived ,after driving up roads with grass growing in the middle to St.Johns in Seaborough , which was on the Dorset Somerset border but now in Dorset. 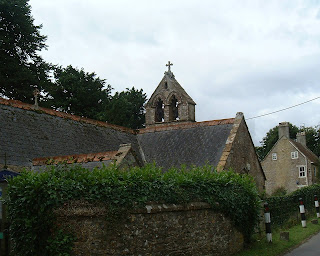 It does not look much from this photo,but it was very small and the views were stunning,but more of that later.The house you can see is the Rectory. We looked at the notice board by the gate at a notice saying there was a book and transcription written by a local man and available to buy. It gave his phone number and as it was just around the corner from where we were , Martin phoned him and arranged for us to go see him after having a look at the churchyard.
So in we went.Unfortunately due to isolated churches being vandalised etc it was locked ,but maybe it will give you some idea of how quaint this was. 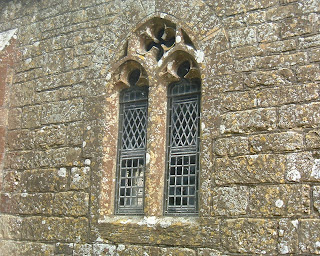 I could just imagine my great great grandfather being carried by his parents into the church through this porch,which was covered in Jasmine but maybe not in his time lol.I suppose he may have been wearing the Dorset smock in that period. 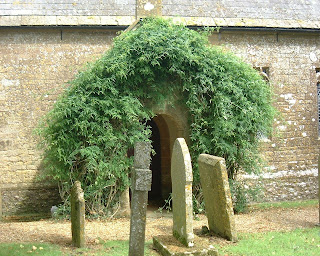 Such a shame we couldn't go in, as the book shows the inside and its lovely. 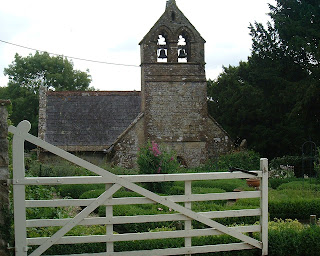 Next to the church is the old rectory,oh boy would I love to live there! It is now owned privately being sold in 1961,you can see the gate to the box garden you can see as you walk by. 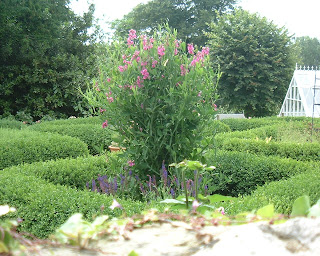 It was so pretty and very country living type of property, I took this through the gate this is the front door. 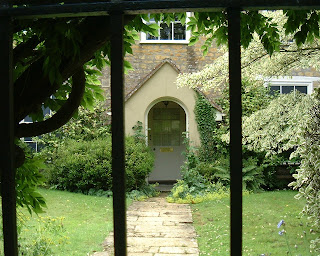 We made our way to a little cottage set on its own in front of some imposing gate posts that led to Seaborough Court which was rather magnificent. The cottage was where the man that had written the book lived. We had a long chat with him and bought a book which verifies the information that James was definitely baptised here and his 2 sisters .One of which had died the year before his birth aged 2. Apparently small pox was rife .This is where the view comes in ,as you can see how 'countryfied'it is by this next pic.The book that we purchased. 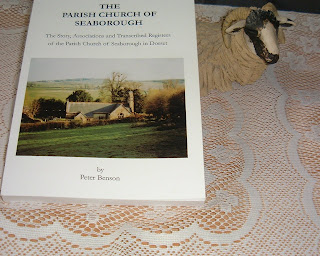 So a very successful outcome. You are probably thinking if you are interested in genealogy that we are lucky having ancestors that didn't move far ,let me tell you it is a lot more tricky than Who do you think you are? lol.I could tell you false trails we have been on and we are still trying to find my maternal great great grandparents.Next is to find the church where he married ,but that for another day.

You are probably bored to tears by now but I did have a little retail therapy.We stopped off at a craft centre which is such a lovely place to visit. We had a mooch round.I bought a bear and a box in the sale cost me £5 for both ,I know you need to see , 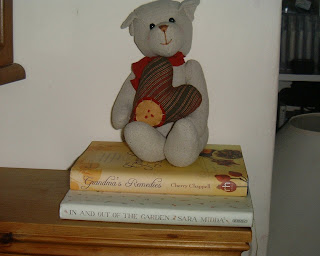 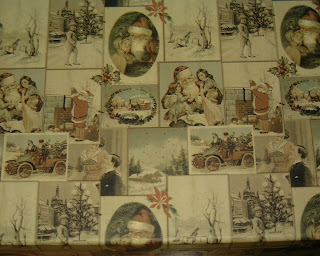 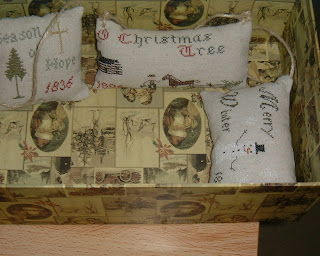 As you can see it was a Christmas type of box but I thought it would look nice holding the ornies as I finish them,I must stitch more!
Then at the same little complex which I might add is in right out in the country-I visited Beccas Emporium where I found this fabric for backing bits and bobs,and some bat buttons. 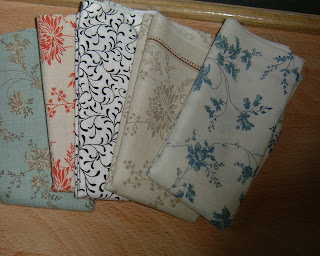 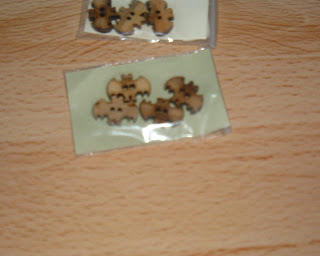 We then visited the Earth Design centre,where my friend Karan would have been lost for a while,with their crystals and books on things she is studying.
Time for coffee and cake ,we decided not to stay for lunch as Ollie was home alone.
So into the car and on our way homeward but just had to stop for a sheep fix. 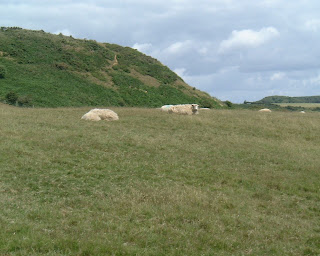 also you will see that I have changed the header pic. It is taken from Abbotsbury hill looking toward Portland, we live about half way between.The Chesil beach is pebbles and stretches for some 17miles. The small lagoon is called the Fleet which is tidal and home to many swans etc.
Taken at the same place the sheep were at.
On arrival home to a very anxious dog,How Dare you leave me so long!! I saw the postie had arrived and brought me a little package from Sally thankyou so much Sally.It was some charts she had finished with so I will look forward to stitching those. 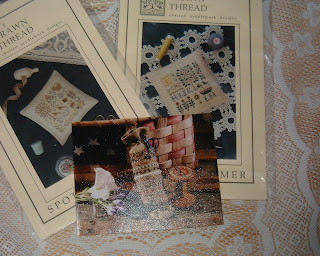 Also a replacement from Fobbles of the Needle roll that was the wrong one they sent which arrived on Thursday. 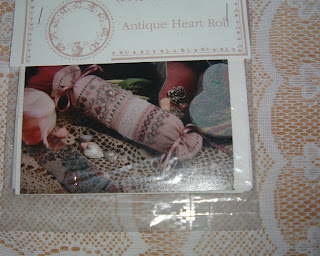 With the order that came on Thursday I received Glad Tidings fob which I have started. 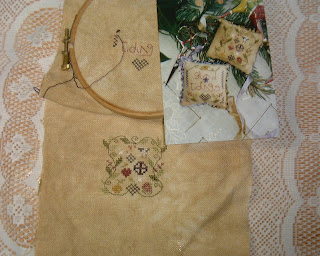 If you look closely you can see a little sheepie friend on it.
Well my bloggy friends, I hope you come back after this not so stitchy ramble,and you are all not falling asleep at your computers. Thanks for listening commenting and just being there, also for all those comments you make it all means sssooooo much.
Just before I go a picture of the latest bloomer in the garden and at last a pic of the swimming dog. 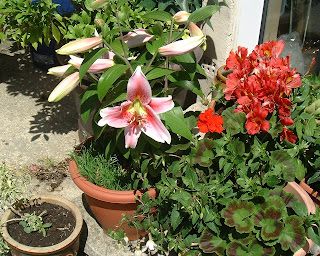 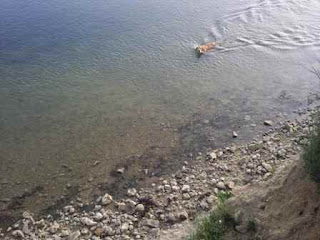 All in all a good day ,but oh dear not good today.Oh well I enjoyed it while it lasted. Perhaps a more stitchy one next time take care all ,forecast this week is for more hot, so don't forget the sun hat.
Hugs n stuff till next time
Barb x
at July 18, 2010

Oh Barb what a wonderful day out you had. The church where your ancestors were from looks beautiful. Isn;t it such great fun tracing them and even better when you can actually go visit where they are from. I am in the process of tracing my maternal grand-mothers side.
Looks like wonderful new stash and goodies you received. Your new start looks very pretty.
Hope you are feeling better soon. Hugs!

What a fabulous outing, it looks such a beautiful place.
Great to see Ollie in the water having fun!
Nive stash, i've stitched another monthly ornie, but not sheeps this time LOL
Hope your aches/pains disappear quickly.

What a wonderful day! The church and old rectory are beautiful.
Great stash too, and that box is perfect for your ornies

Lovely pics . We've been to Dorset on holiday the last three times ,and love it.

Sounds like a great day out, the church looks lovely. I haven't visited Dorset, would love to some day. Lovely stash - the box looks perfect for your ornies.
Sorry to hear you are suffering today - hope tomorrow is better. Gentle (((hugs))).

It sounds like you had a fascinating day on Saturday. It's nice to visit old churches, even if we can't get inside them these days.

I LOVE that Christmas box, covered in all the Victorian collectors cards. It'll be perfect for your ornaments.

Your swimming dog, well I thought it was a seal when I looked at the picture (I didn't read what you'd written to start with).

I thoroughly enjoyed reading about your excursion and genealogy hunt. A few years back
I did a lot of genealogy searching but finally hit a road block. Wishing you much
success on your search.
I enjoy your blog and seeing your lovely stitching....
Best wishes, Denise, Georgia USA

What a great post, really enjoyed about your outing and wow! What lovely stash and blooming flowers.

What a wonderful day out Barb.Your pictures are lovely. The church looks so pretty.I have given up on my searching as I hit a brick wall.

Your new start is so cute. Gotta love those SB sheep:) Glad you like the Spots. Hope you enjoy stitching them. The other two will be on the way later in the year:)

Barb, hi,
I've really enjoyed reading your blog. The beautiful pictures take me back to my days in Weymouth. I love Dorset and Somerset and have stayed there often.
The pictures of the church in Seaborough are lovely. What a shame these places are no longer available for us all to enjoy due to the senseless behaviour of a few louts.

What a lovely place Becca's sounds and a craft centre too, what a bonus. I love your little bear and the box is not only lovely to look at with it's vintage pints but also very useful.

I've been stitching Glad Tidings recently. I also got my kit from Fobbles. Isn't that ribbon just out of his world :>) I think I have been collecting patterns with sheep on all my stitching life!!

I've been browsing back through photographs of your beautiful garden. It's obviously lovingly tended.

I can imagine exactly the reproachful look on Ollie's face on your return. We have a dog who feels equally hard done to whenever we go out :>)
Best wishes Angela
www.picturetrail.com/angelasweby

How fabulous to be able to find the church and further confirmation that it is where your GGGF was baptized. And that church does look so idyllic! I loved seeing the crooked tombstones. What a shame that it was locked up but it is a sad sign of our times.

You hit the jackpot with your shopping afterwards. The Christmas box is wonderful! Great place to keep your ornaments. They remind me of the series I had on my blog last year as freebies. Who designed them? And then lots of new stash....you will be kept out of trouble for a long time...lol.

Hope you sweet dog forgave you for staying away so long? Glad you were able to get away.

What a great entry on your blog, the pictures were lovely.
Hope you're well,I have been neglecting my bloggy friends so am out of touch with your world, sorry!
Chris x

What a picturesque place it is. Glad you found out more of your family history. Fab new goodies. Your garden is absolutely stunning! Enjoying my catch up & seeing the stitchy finishes, WIP's & new starts. :0)