Doesn't it make you want to spit. 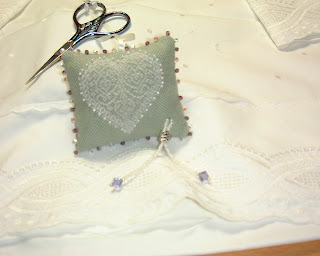 Here is a pic of a little gift I sent to Tracey in the US, we traded charts and hers arrived within days of her posting it , mine although I posted it 2 days before hers it arrived a week later. I know she got the chart ,but the envelope had been torn open and my little cushion did not arrive.
So yes, it makes me want to spit.Rant over!!! This is the chart I had in my trade and she kindly sent me 2 of the Weeks needed to go with it. Isn't it cute. It will go on my birdie wall WHEN i have stitched it! 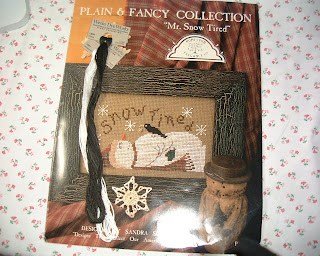 Well folks how has your week been , hope it was a good one. I found out I have been the lucky winner on Sarahs (craftymoo)blog , gosh two months in a row, I am deffo going to buy a lottery ticket this month lol. Will let you know what I receive .

Family news and health update.
Sue saw yet another consultant this morning ,she had to have her head shook as they thought she may have labrynthitis ,but now are going to refer her to a ent consultant. Poor girl is really going through it at the moment. Her dad has just been diagnosed with cancer and is going for an mri scan tomorrow to see if it has spread.


Jack has had both of his adult teeth out and had a bit of a traumatic experience with one of them as some of the root got left behind.He now has to see the orthadontist to see if he needs an op to remove it before he can have his braces fitted.

Martin had a trip to minor injuries this weekend just gone, he had an infection in his hand which was bright red and spreading up his arm. They couldn't find anything in it, but gave him antibiotics and it is getting better. Then the other hand started with the same thing. He does not do normal, always has to have something for the medical people to ponder over .It did look angry though.
I am fairly pain free at the moment and it is wonderful!

More family news.
Ella is thrilled she has been chosen for the netball team.
On Sunday we took a little trip out as I needed a sheep fix, we did not go far about 6/7 miles away but these are the pics we took. 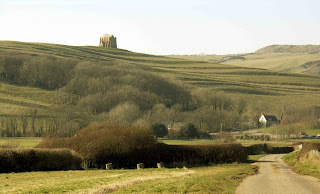 St.Catherines dates from the 14c .It was built by monks of Abbotsbury,possibly as a beacon for pilgrims coming to worship at the Abbey in the village below.The chapel survived the dissolution of the Monastries unlike the Abbey, probably due to the fact it was valued as a navigational beacon for sailors making the crossing of Lyme Bay.
Dedicated to the patron St.Catherine who was the patron saint of spinsters, the chapel became a place for women to pray for a husband . I have no comment to make on that lol.
Words of an old prayer
A husband St.Catherine
A handsome one St.Catherine
A rich one St.Catherine
A nice one St. Catherine
And soon! St.Catherine.
Well it made me smile.
Then we saw what I had gone out to look for Sheep!!! 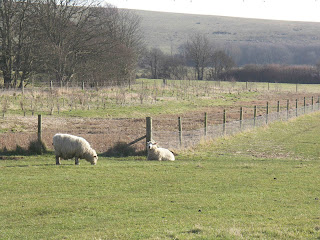 I was hoping to see lambs but prob a bit early yet.The one on the left had a limp poor thing.,
So I had an outing this last weekend. At some point I will share with you some other places that are close to where we live.
Now onto stitchy news.
Well I do not have a lot to share with you in the way of my stitching ,I have to let Yoyo get the progress on QC before I share with you,hopefully you may get that next week. I have made progress on Awake the Dawning Day though and I am really enjoying this. 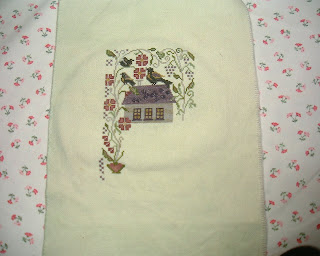 I just love the colours too and it is stitching up nicely.
When I spoke last I promised I would finish my right hand border of the vine,which I more or less did, but when I came to do the heart at the bottom, all was blooming nicely ,leaves were growing ,(and there are an awful lot of them) and flowers were blooming when the dratted frog came for a visit. My heart was broken! it would not meet.So rip it rip it became my song . Oh well perhaps the heart will be fixed tonight as it is UFO night on Stitch and Stash with my friend Julie and MR Stick!!
For those of you who have not seen the vine and wondering what on earth I am dribbling on about, I have taken a taster pic for you . 2 squares of the right hand border and 2 inner squares for you to see. I don't know whether it is because it is done with perle thread and seems clumpy after my over 1 on 28 count but boy will it be a major HD when this one is finished (you will feel the earth move over the pond) 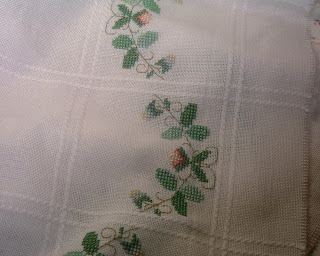 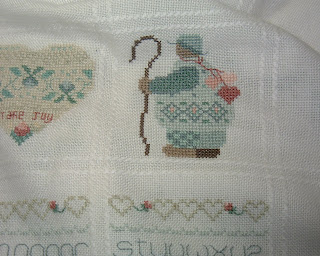 See ya later Julie.
That is all my stitching this week doesn't look much does it. Have finished another book though Rose of Sebastapool.Also received a little stash.
This is the fabric for my Quaker Diamonds from Picture Plus . 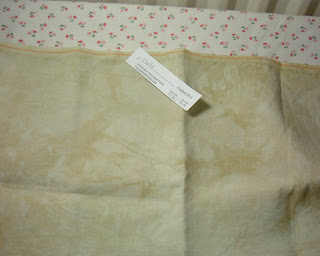 Next actually an early anniversary present as I wanted these two charts to do for my birdie wall. 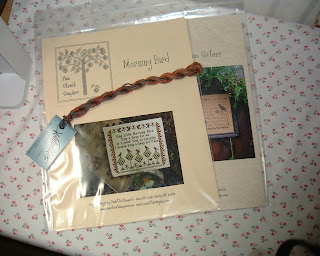 That is all my goodies for this week, but thought I would share with you a little someone that Martin made for me this week ,she goes with my Little boy with the umbrella. I will take a pics of some of his work for you to see at some point. 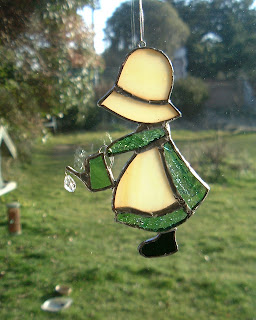 Now just for you that leave me the super duper comments (and thanks for the encouragement on the Blackbirdie wall! a few flowers. 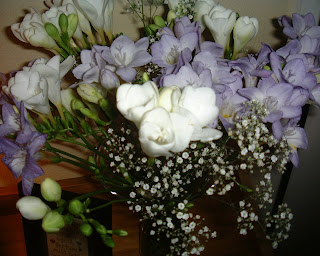 For those of you who read my posts if you need a hug,you got it! Take care and have another stitchylicious week.
Hugs n stuff Barb
at March 09, 2010

LOL at the St Catherine prayer! The Shepherds Bush vine is gorgeous even if the frogs did come calling. Love the little Sunbonnet Sue suncatcher too

Oh Barb, I am really so sorry about what happened. I need to check with the PO to put my mind at rest. :) Love the pics! I made one the background on my desktop. (((HUGS)))

Beautiful stitching even with the visit from the green fiend!!
I hope your family get some of your luck!!

Oh dear Barb your family are really going through it at present. Hope that things look up soon. Lovely stitching updates - such a shame about the frog - isn't it frustrating when that happens. it's such a shame about your little stitched gift - I always worry so much when I send things overseas and I never understand why it takes so long when things from the US get here so quickly!
Have a lovely week with lots of stitching!

What beautiful freesias, my all time fave flower.
Are you watching lambing live on TV this week seeing all the little ones being born?
Hope all goes well for Sue and her dad, poor little chap too with his teeth. Hope Martin is soon better... what alot of health issues your family is having. Nice to read you are having a pain free week, that is good news.
Nice new stash, love the little cushion too, Royal Mail has a lot to answer for sometimes!

Lovely stitching updates Barb. Your afghan is looking beautiful inpsite of the frogs.

Sending lots of positive thoughts for your family.

What a shame about the cushion. It's so pretty. I wish the post would handle packages more carefully.

Sorry to hear of the open package and the missing cushion, it is a lovely one.

Your WIP's are looking beautiful.
Sending good wishes and positive thoughts for your family.

You're right Barb, you've got leaves coming out of your tree!

Poor Sue must wonder what on earth is going on right now, Bless her. Will ad her to the Healing Book. Hope Jack is OK now, poor lad.
Oh no, what a pain - I'd spit too. More lovely stash there. Love Sunbonnet Sue. Great progress on the WIP's. :0)

Oh my goodness but that chart you traded is adorable!!! It is going to look perfect on your bird wall too. What a shame about the pincushion being lost in the mail. It is so sweet of you to make another one for her. She will love it.

I am sorry to hear the health problems going on in your family.