A happy New Year and a little catch up from me 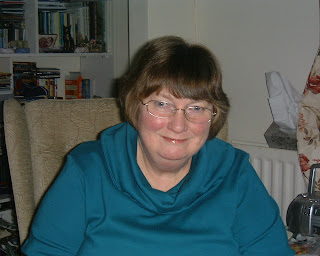 I hate having my photo taken so make the most of this it probably will not happen again. Martin "got me" so for those of you who know me, now you know me some more lol.
This is just really a quick update , blimey what a start to the New Year , Martin had choking session on Sunday dinner and ended up having to make a 999 call. That was scary. SIL is very ill in hospital that also happened on Sunday,Liver and Kidney failure ,she was not expected to pull through. So every-time the phone rings we think its the call. She is due to have her 60Th birthday in a weeks time.
They do not live close so no chance to go visit. Her girls are beside themselves as is Martins brother.
No news from friends husband still,despite leaving messages, no news on Sue either.
Thankyou so much for your good wishes for them it means a lot.

I have a little stitching to share with you
my last ornie of 2009 was this one that Julie did on Stitch and Stash and I had to do it too. I ferreted through my mags till I found it and lo and behold here it is. I finished it in a hurry so don't look too close. 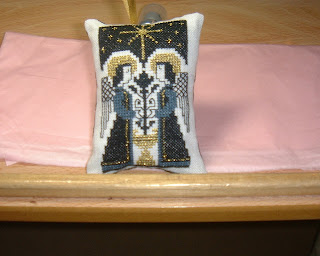 Then I stitched this Blackbird design stocking "Winter Carnation" for Karen for her birthday. Filled it with Lavender and added some bits and pieces, I know she had some other stitchy bits from other friends and she said in her e mail to me that she thought we were trying to get her back into stitching. Do so hope it worked. 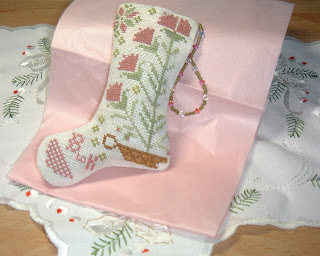 I am currently SAL with Yoyo on her Christmas design - I have chosen Quaker Christmas and here is my progress so far. 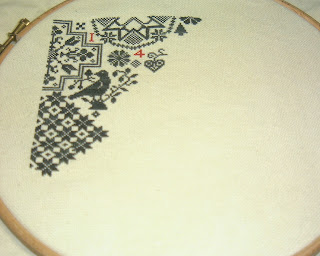 I have also started on Stitch and Stash Just Nan SAL 4 wishes but not really enough to show any progress. But I will. 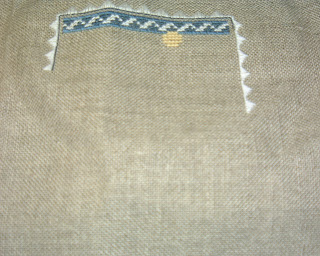 I have finished the LHN SAL ORNIE but not "finished" it into anything yet here it is over 1 on Sassys Celery. 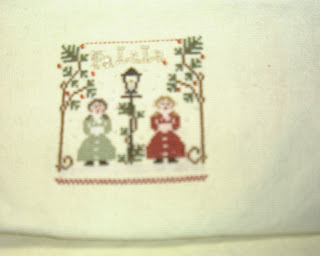 Not altogether happy with the faces but they will do. I have just heard postie come to the door and he has brought me the next ornie to do (will I ever catch up) a pic for you. 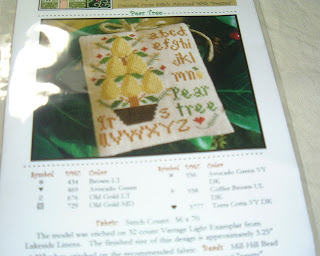 It was Sam's 8th birthday on Sunday (not all bad things happened last Sunday) Kate made him an army cake ! she had little toy (plastic) soldiers on it , when the Alfie had finished helping she said it looked like a battlefield!!lol. We gave Ella a Nigella Lawson cookery book for Christmas as a little extra , Graeme and Sue came down to see Sam on Sunday and Ella had made a fabulous looking cake from it,called Malteser cake, it has Horlicks in it. The icing was very sweet though. I don't suppose it took the tribe long to demolish it.
Well folks those of you who have to work -you poor things- but I have done my bit honest- I am now going to get the vine out and stitch on it ,so I may get a star from Mr Stick instead of a prod.
Take care all and hopefully I will have good news for you next time.
Thankyou for your comments,I do read them and Jane I still haven't found your blog!
For those of you with poorly folk ,and that are generally under the weather thoughts are with you.
Bye for now.Oh forgot Ollie is fine ,he disappeared whilst out with Martin this morning - he thought he would go for a walk with 2 labs and a greyhound instead. I will change the background and the Header next time ,did mean to do it now but stitching is calling.
hugs Barb.
at January 05, 2010

I do like those LHN ornies, Lovely gift for Karen.
I look forward to seeing your progress on A quaker Christmas I hope to get mine done this year!

Love Maltesers i bet that cake was tasty,Love Karens stocking,Quaker Christmas looks fab,you have done about the same ammount as me tina x

Here you go Barb - my blog is at
http://janesstitchingjourney.blogspot.com
I am not very good at updating it but aiming to be better!

Lovely picture of you Barb! Great wip pics and you have doen a lot on the Just Nan already. I have started mine that you gave me and it is lovely to work on. Hugs and prayers for you and your family at this time. xx

Great stitching Barb, and lovely to put a face to the name too

Nice to 'see' you Barb. I am so glad Martin is ok, sending positive thoughts for everyone else. I love your stitching and I am looking forward to all your 2010 finishes.

Lovely photo of you Barb. Nice to put a name to the face.

That must have been so scary for you and Martin. Hope he is doing OK now. Sorry to hear about your SIL. That is so sad. I hope you hear something about your friend soon.

Love all your stitching as always. The gift you made Karen is so pretty.

Do you have the SB pine needleroll? If not I have the chart and will happily pass it on to you.

Superb stitching as always, a lovely gift for Karen and i do like your LHN ornie. QC will progress nicely during the year i am sure, as will the vine LOL

Nice to "see" you Barb!
Thoughts are with you for your friends and family.