I always feel that once November the 5th is over we are only a countdown away from that time of year. My days seem to go quicker than everyone else so I start my  countdown in November. The trees are really lovely or they were until the non stop rain we have had since Monday last. I still have some flowers in the garden but all is looking rather sad and bedraggled.
The mantle has changed and all to do with Remembrance this month. We now have rather a simple mantle shelf after the Halloween mayhem'
Here it is now. 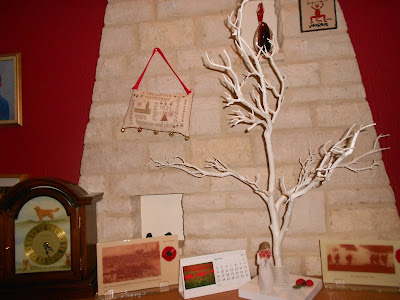 The little girl under the tree with the poppies is a new addition, I thought she really looked as if she belonged here. 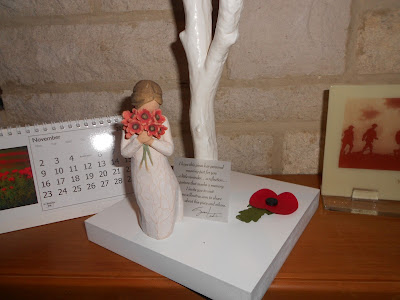 The two glass pictures are Martins creations , one gives details of my grandfathers brother who died in the first World War and the other is a general remembrance for all those who fought and gave their lives so we may live. 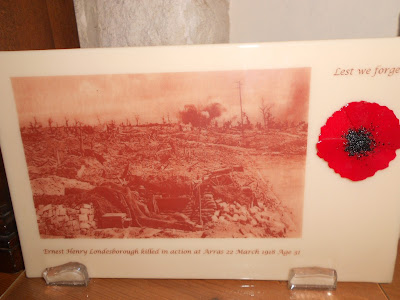 These will stay for the rest of November. 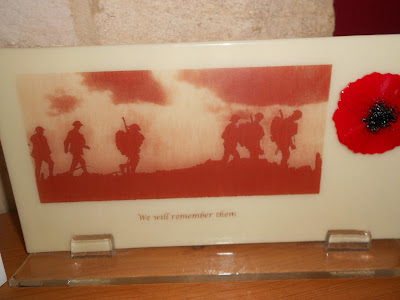 I am hoping to stitch these ready for my November stitching next year, nothing like getting ahead of yourself is there! 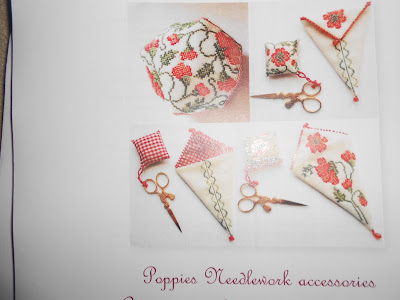 I am also thinking that Martin could make some red poppies to hang from the trees branches , so really the mantle is just a work in progress.Also  next month  it will be full again.
I  had a little treat last week ,, I know I have one in a million ,this was a wish granted. I thought my scissors were getting a little tired, so he bought me these so the new fob and case will be used for them. Meanwhile they are being looked after by the fob Tina made me , and a case I stitched in 2004 ,11 years ago! 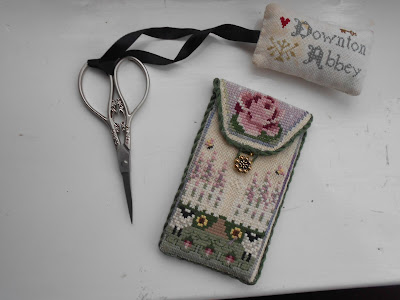 Back view of case. 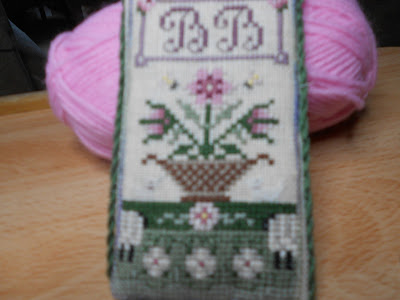 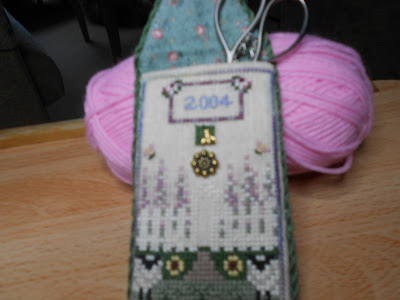 So there you have it still in use after 11 years,
Of course there are still sheep.
When  we went shopping in our local Sainsburys, I saw this and thought it would look nice on the sofa, for the winter,this was the back that I did not see until I got it home. 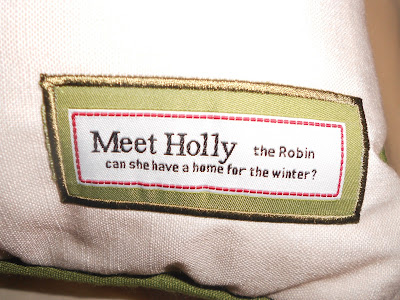 So would you like to meet Holly, here he is 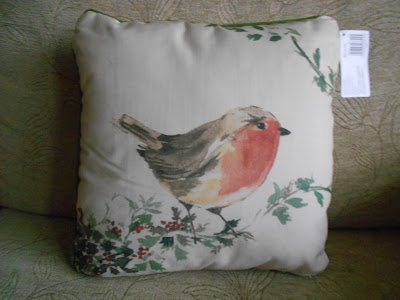 They did have a rather nice Scandinavian type throw that he would  look rather nice on. Hmm
maybe next week.My  friend Julie sent  me a link this week, and I had to order it as it is right up my street, I had not heard of these mysteries before so I , looked at Amazon and of course they had it. I ordered it yesterday and it arrived today. 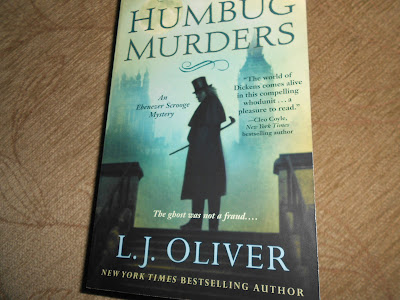 My pile of books grows. I wonder if the pile will ever go down , I very much doubt it.
Now onto stitching I have a few finishes to show you. I have firstly finished my second Christmas Cube. I am really liking these too, in fact I may have to get the LOVE ones for Februarys mantle lol 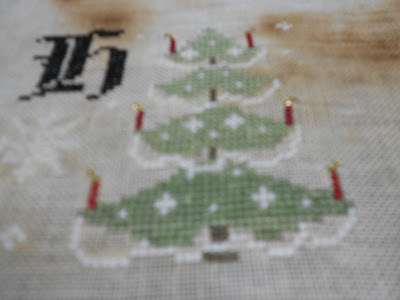 I stitched the flames on the candles with the colour called for but decided they did not show up   enough so I stitched over them with some metallic thread.
Of  course it is only the stitching that is finished. Still have to be made up.Next is one I started a couple of years ago and for some reason I was not enjoying  it so it got put in the box of abandonment. Stitching with Miss Julie on Strictly UFO nights ,it came out to play again and perseverance has paid off . Not sure what to do   with it , I suppose something to do with lavender but what ?,have to go look  in the dusty cupboard for some inspiration. Unless you have an idea of course.
Here is Lavender Hill 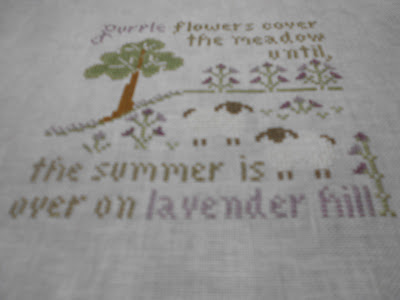 Next is Merry Merry that is the 10th in the series Sally and I have  stitched this year ,just 2 more to go and the next one features sheep!! 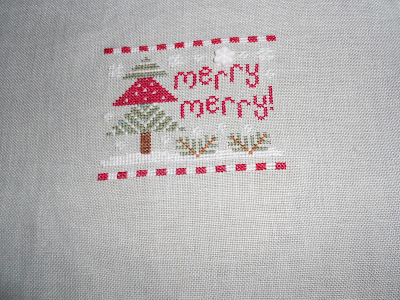 Again still to be made up ,next is new starts. The Blackwork Journey has started , I am praying I do not do anything wrong on this as I would never be able to unpick it , can  you imagine  stitching 50 or so of these blocks and then finding you have done something wrong , that box of abandonment would be calling I am sure, but for now I am really enjoying it I am now on block 3 of the 131. 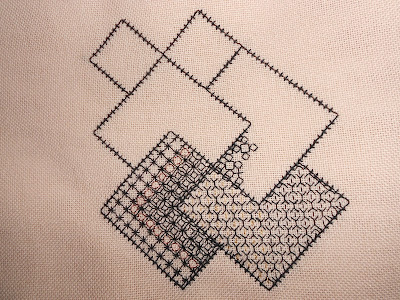 As you look at it the bottom left one has a copper line of pattern and the one on the right the straight lines in the middle of the blocks are half gold and half black it is very interesting ,the one I have just started I think has silver somewhere in it. On Wednesdays in the parlour I am stitching Moonlight and here is where I am at. 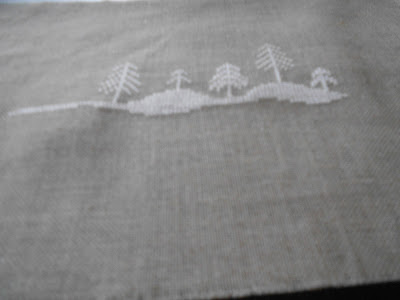 A few more trees  and  snow since last week.Last but certainly not least is a picture of our medal winning grandaughter Caitlin. The day after she completed The Great South Run. 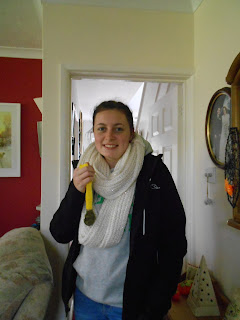 She was well out of her comfort zone doing this, she had done a little training but not as much as she should. She had to stay in a BB  and  share a room (and bed) with the lady she was running with. She had an attack of the jitters the day before when she asked her mum if she would go too. However when the lady turned up off she went. She ran 10 miles in 2hrs 15, She said at first you had to walk as there were so many in front. 24,OOO took part. She was running for charity and they raised over £1000 .We watched the race on tele but did not see her . We are so proud of her. I could not run 10 yards let alone 10miles.
So on that note my post comes to an end ,now I am off to see what I can restart tonight with Miss Julie Mr Stick and the Strictly dancers. Let you know what it is next time. A friend has just been over (so I went missing for a while) she came to show us a scan photo of a golden retriever that is having 6/7 puppies, She has a beautiful boy called Barclay who is 1,they have put their name down for one and she was trying to persuade us to have another . Oh I wish ,need to work on the man of the house. Lyn was solving all our problems about being too old. Like if you cannot walk it we could walk it for you .   If y
,u want a holiday we will have them both. It would give Ollie a new lease of life. Oh dear temptation has kicked in.
Going for real this time. To my new followers and those that kindly left me a comment last time thankyou so  much   , send anyone over  I would be so  pleased to meet them
Take great care of you and yours and keeeep stitching or whatever.
Hugs
Barb

Oh Barb! You are going to end up like me with the poodles!! ;) Ha! What's another one! tee hee!

What a lovely idea to decorate for Remembrance Day. I love your white tree, I would love something similar for my sideboard. Great for hanging stitchy things on.
Your stitching is oh so beautiful. I'm in awe of the Blackwork piece, that's going to be a stunning work of art when finished. Well done on finishing Lavender Hill after all this time. Is it too obvious to suggest making it into a pillow filled with lavender?
Congratulations to your granddaughter - what a fantastic achievement!

We just got back in from our march around the town and church service .

It has been raining here too.

Love all your beautiful stitching .

And congratulations to your granddaughter .

I love your mantle for remembrance. It is beautiful.

Lots of lovely stitching. I do love your new scissors and I have to ask who is the designer of your case? I love it. Of course I would as there are sheep.

Your blackwork is amazing!

I finished Merry Merry too so yay sheep next!

Your new cushion is adorable.

What a lovely idea for your mantle. Love your stitching projects! Pretty pillow ~ it would be nice for my sister named Robin. And I have the same "problem" with my reading pile, but it is a good problem to have. :) Congratulations to your granddaughter!

What a tranquil mantle for the remembrance, the White tree looks so poignant. Did the man if the house make your tree?
Fabulous Stitchy progress as always, the black work is amazing.
Super to see an old project, cute holder for your scissors, nice new scissors.
Well done to your runner, she looks very pleased with her medal and so she should.
I wonder if you will get a new furry friend to LK's with lol.
Love and (hugs) xxxx

Oh My Sweet Barb, I absolutely love that little bird pillow and the clock on your mantel is very, very similar to the one we have on ours. :o) I have a red poppy that's in my car hanging from the mirror that I purchased from a Veteran several years ago and it's there in remembrance of my Father who fought in WWII. All of your stitching is so nice and bright....makes me smile. I have some things to send you and hope to get them in the mail soon. The newest issue of Just Cross Stitch has 4 designs of redwork and I thought of you immediately so please don't buy that issue for them. They will be coming your way and I also picked up the thread holder you asked about.
Hugs from across the Pond,
Barbara

Love the mantle with all of the remembrance items. Wonderful stitching. Well done to Caitlin, an amazing achievement.

Love your rememberance mantle,those willow figures are so sweet.

Lovely stitchy finishes and wips,love to see what you are working on.love your old scissor pouch,looks like a Just Nan design.

Your blackwork is looking fab,have seen a few people stitching this on fb.

Congratulations to the runner,well deserved��
And no i don't think your book pile will go down,if your charts and stitching stash have anything to go by lol
Hugs xxxx