My Goodness me, it is now Blooming June , everything in the garden is lovely.

I think I must start with an apology to any of you who wonder where I have been, not far, just very busy I am wondering if June will go a little slower so I can play catch up.As you can see by the header June has brought my rose bed into flower and the smell is simply gorgeous. Julie my dear friend who has just finished Irish Garden which is simply stunning ,take a look at her blog anyway she said the front garden had probably changed since her visit,so just for you Miss Julie the front garden. 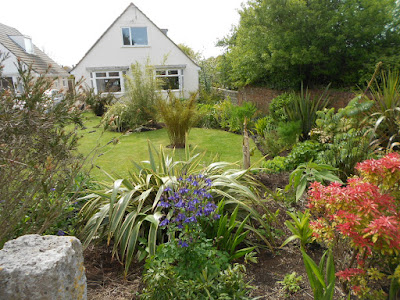 This was taken in May so it has all grown a lot since, but gives you some idea. Talking of May I think I had better show you my finished girl. At last!!! 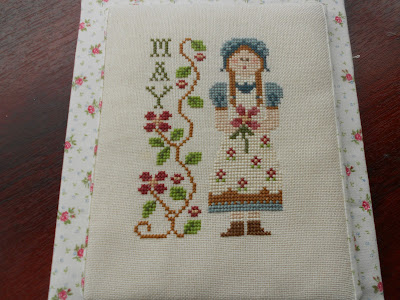 The back looks like this, rather a plain finish this time, but she looks rather sweet I think. 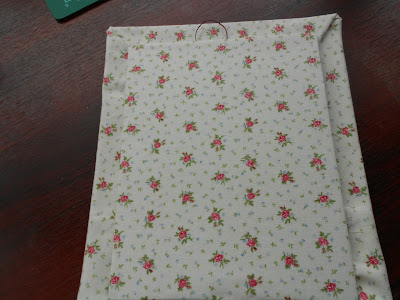 I thought I may hang this one ,when May comes round again. I have not started June yet, so I am not giving myself deadlines on these I shall do them as and when I feel like it,sounds like a plan.!
We have had major celebrations both last and this month. On the 18th of May my mother in law had her 90th birthday and of course photos had to be taken so I could make her this for her to remember the day by, 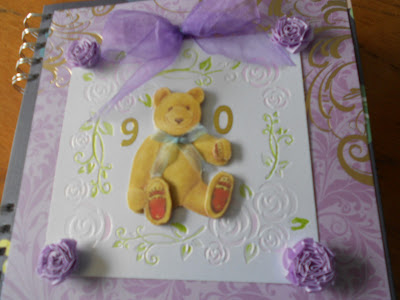 Her favourite colour is all purple shades and she collects in their (probably hundreds) of teddy bears. I will not bore you with all the photos that would take all day ,but I will show you a few of my children and their children. 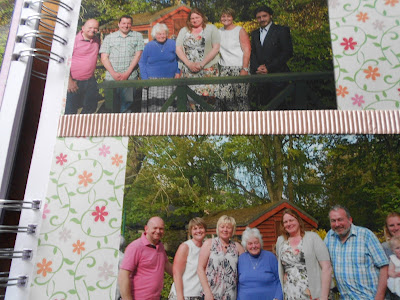 Now who is who, well Mum is in the middle , Kate dd is on her right of the pic and son in law Iain.
Graeme ds is on the left and his cousin Louise in the middle ,next to mum is daughter in law Sue.
The pic at the top is her with her grandchildren. 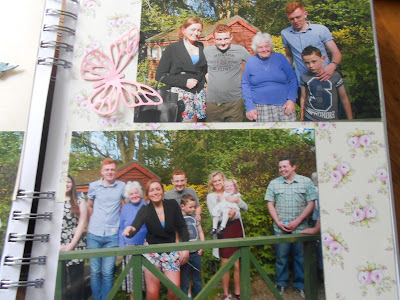 These are her great grandchildren, Kates brood. Under neath is them again with Ella , and Willow who is so cute and belongs to Charlie on the right. 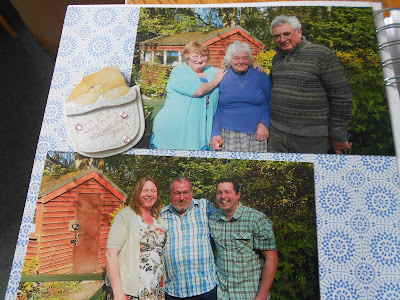 The top pic is me and Martin with her.  Underneath is Kate Iain and Charlie who is her cousin and was their pageboy. Just one or two more and then I will go onto something else. 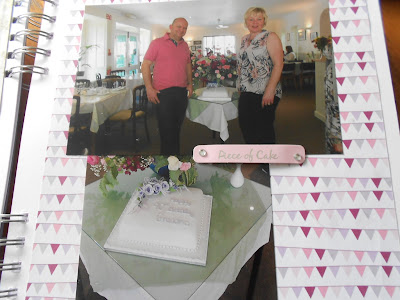 This is Graeme our son and Sue with the cake they made , Sue made the cake and Graeme iced and made the sugar flowers. The flowers I did are behind. 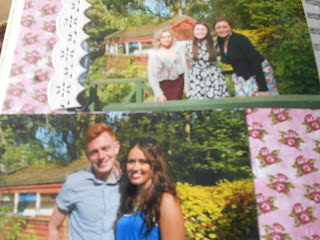 3 cousins , Ella ,Callie and Caitlin. underneath Jack and his girlfriend Katie. So now you have met some of the family. It was a lovely day, at the Upwey Wishing Well and a lovely cream tea with all the family. Mum was a bit overwhelmed by it all ,as it was a complete surprise. So you can see why I have been missing. Also in May was an exhibition of The year of the sheep and the members of Royal manor Workshops of which Martin is chairman put on a show of all things sheep and a few other subjects too. 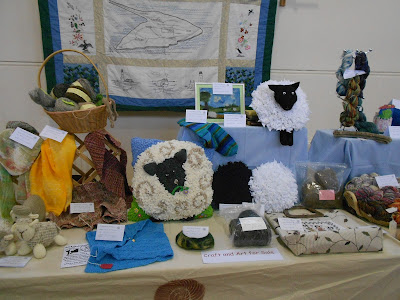 My knitting bag is at the front and oh I love those rag sheep , The one sitting at the top took my eye, I think I need one!!! 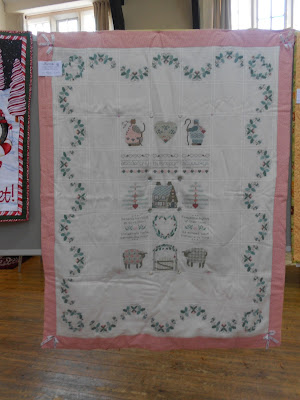 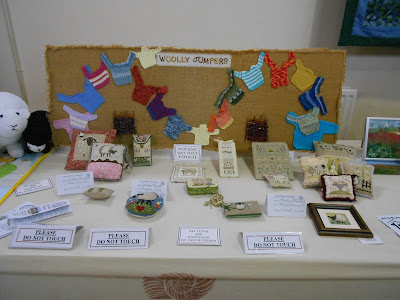 The little woolly jumpers were so cute.and how about these for a flock. 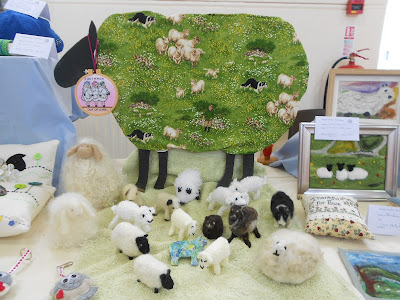 One lady did a piece of tatting and it certainly had the WOW factor. 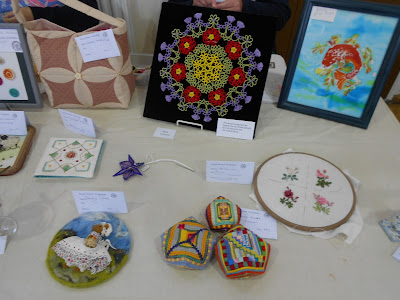 It is the piece on the black fabric. I put my sheep virtues in and the woolgatherer too but better maybe leave those for another day, In the quilt room though was this . 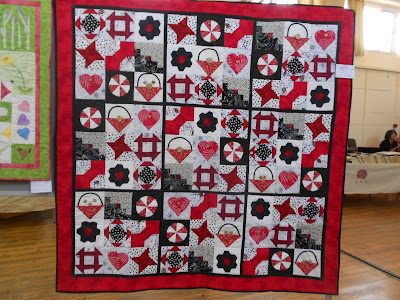 .
Martin bought me the picture of the gloomy sheep and it now hangs in the hall. 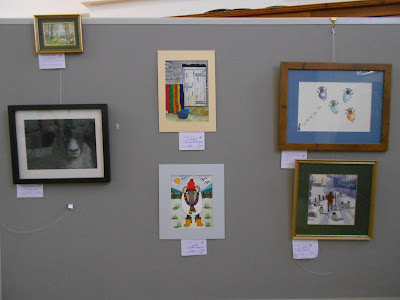 The one on the left. Martin put some of his sheep in too. 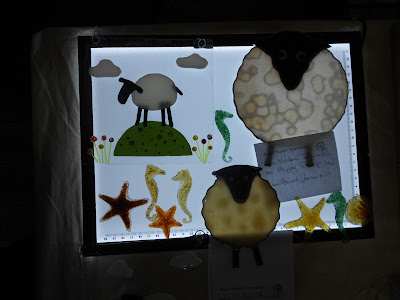 He put them on a light box so people could see them properly. There was a lot more than I have shown you and such talented people out there. 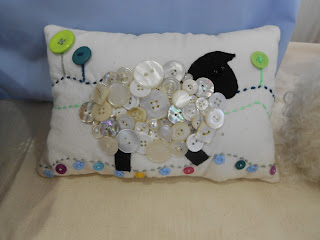 Just one more sheep, a button one , I think I may have a go at this one.So cute. 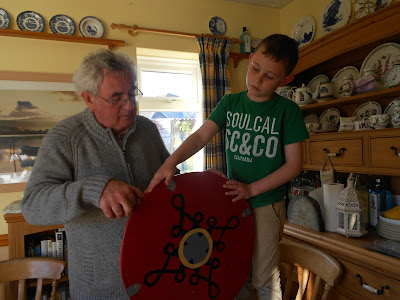 Alfie our youngest grandchild who is 8 had to make a shield for a school project. He was going to a iron age fortification called Maiden Castle which is an earthworks just outside Dorchester. He wanted to be a  Celt \(only 2 of them had celtic designs) the rest were romans, So he did not stand a chance really lol. Any way here he is with Grandad helping , or was it the other way round. And the finished article with its proud owner. 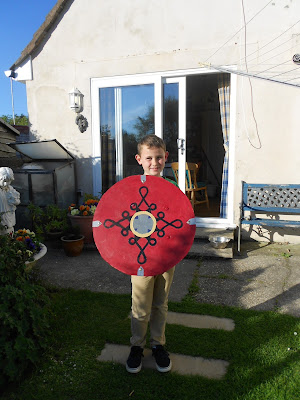 So what else happened in May, well Kate our daughter had a birthday and here is the card I made her , thought you  would like to see. 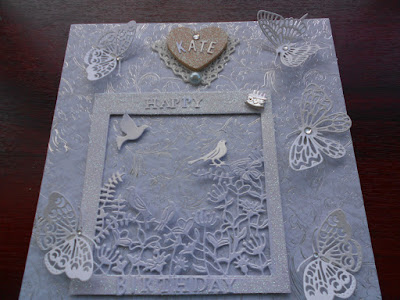 She loved it.  I have not forgotten my stitching although now you can understand why it has taken a back seat . I have been stitching with Sally on my Hallowe'en cubes and have just started W.
The cauldron is black not blue , 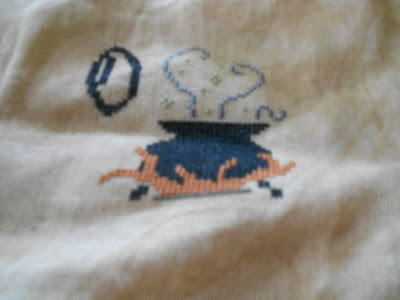 I am really enjoying stitching these, putting together may be a different story. I have finished at last the Elves that are part of the Country Cottage Needleworks Christmas Ornaments again I have been Stitching with my dear friend Sally. 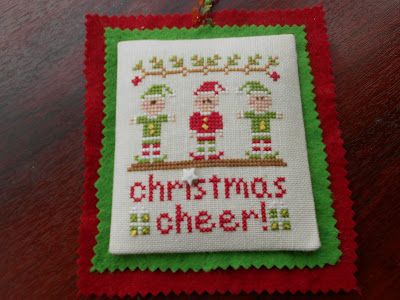 Now we have started on the next one and already I am liking this a lot. 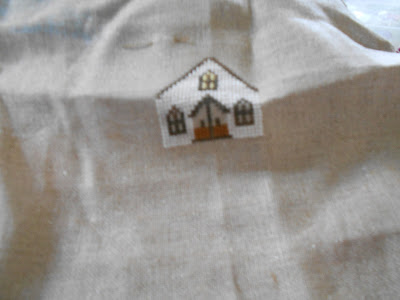 I have finished the church this  week ,wonder how Sally got on.Not much to show on my BIG Shepherds Bush ,something had to give and it was that. I have finished my ufo with Miss Julie though .I cannot show it to you as I have yet to decide if it is to be a gift . I think it just may be .
All these birthdays  and another celebration last week . My husband reached three score and ten on the 5th and here is a pic of him on his birthday.We went to Pallington lakes the day after his birthday and had the use of a Shepherds Hut that was named The River-keepers Hut as it was right by the river.I will show you more of that later \(a second installment\).I think I had better call it a blog post now , so until next time , quicker than this maybe lol. I leave you with the pic of himself on his birthday , a man so very dear to me. Take care all and keeeeep crafting whatever it may be., 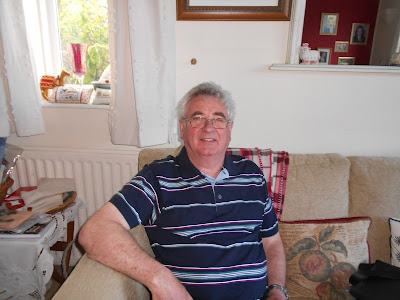 A taster of what is to come. 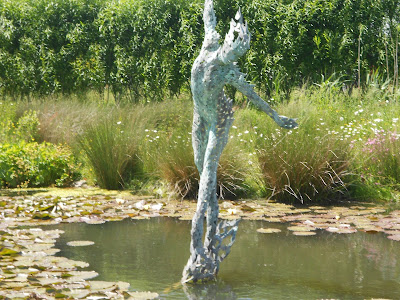 Another lovely post Barb , sounds you are very bust like me , where do the weeks go .
Your garden looks lovely , and all your stitching and I see lots of sheep.

So wonderful Barb! Yes, do make yourself a button sheep.

Gorgeous post Barb. The scrapbook looks amazing as does your garden and other bits and pieces. xx

What a great post Barb. Your garden is looking amazing and it was lovely to see all the pictures of your family.
I really enjoyed looking at all the sheepy crafts. I have made note of that button sheep for future reference and may well be pinching that idea. I love the rag rug ones too

A wonderful post Barb. No wonder you have been quiet! Lots of lovely photos. I love the album you made for Martin's Mum.

I am drooling at all the photos of the sheep! So many gorgeous things.

Lovely stitching too. Your May girl looks so pretty and I love your elves. My church is being taken apart as someone forgot to out a door in! Duh!

Lots of lovely crafting ,love all those sheep,the button one looks fab.