Mad as a March Hare!!

Hello to all . The title refers to  the month and the needlefelt workshop I at last attended with grandaughter Caitlin , I did a hare (artic as he is white) and Caitlin turned hers into a cat which I will  get a photo of to show you. Anyway be aware this post will be a long one I think with many pics , so much to share ,and hope to give you a few things to comment on.If I am lucky.
Anyway here is Harold the Hare. 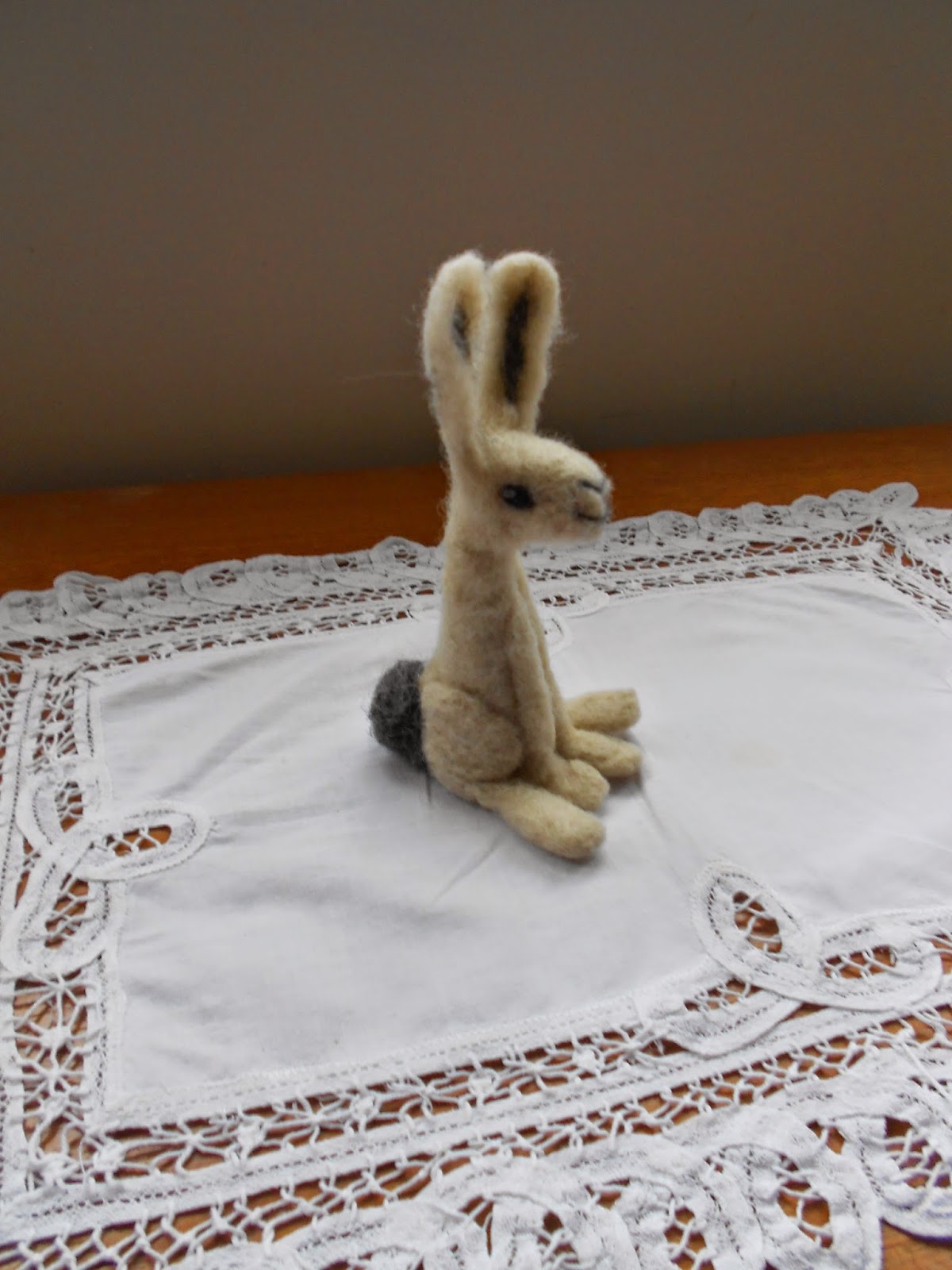 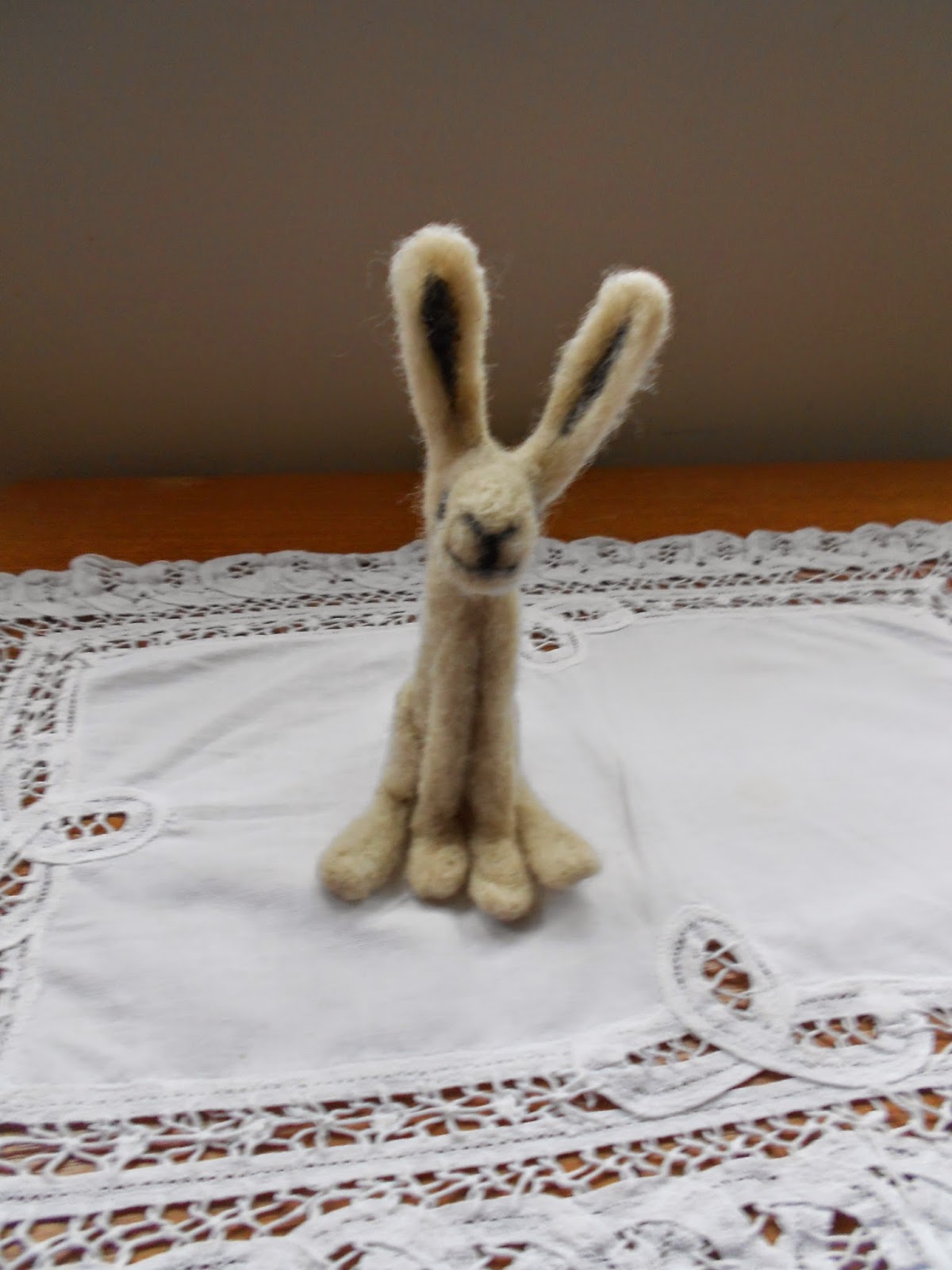 I was quite pleased with him, at one point he looked like a donkey! Also  I finished Humphrey at last, he now has a blanket or 3. 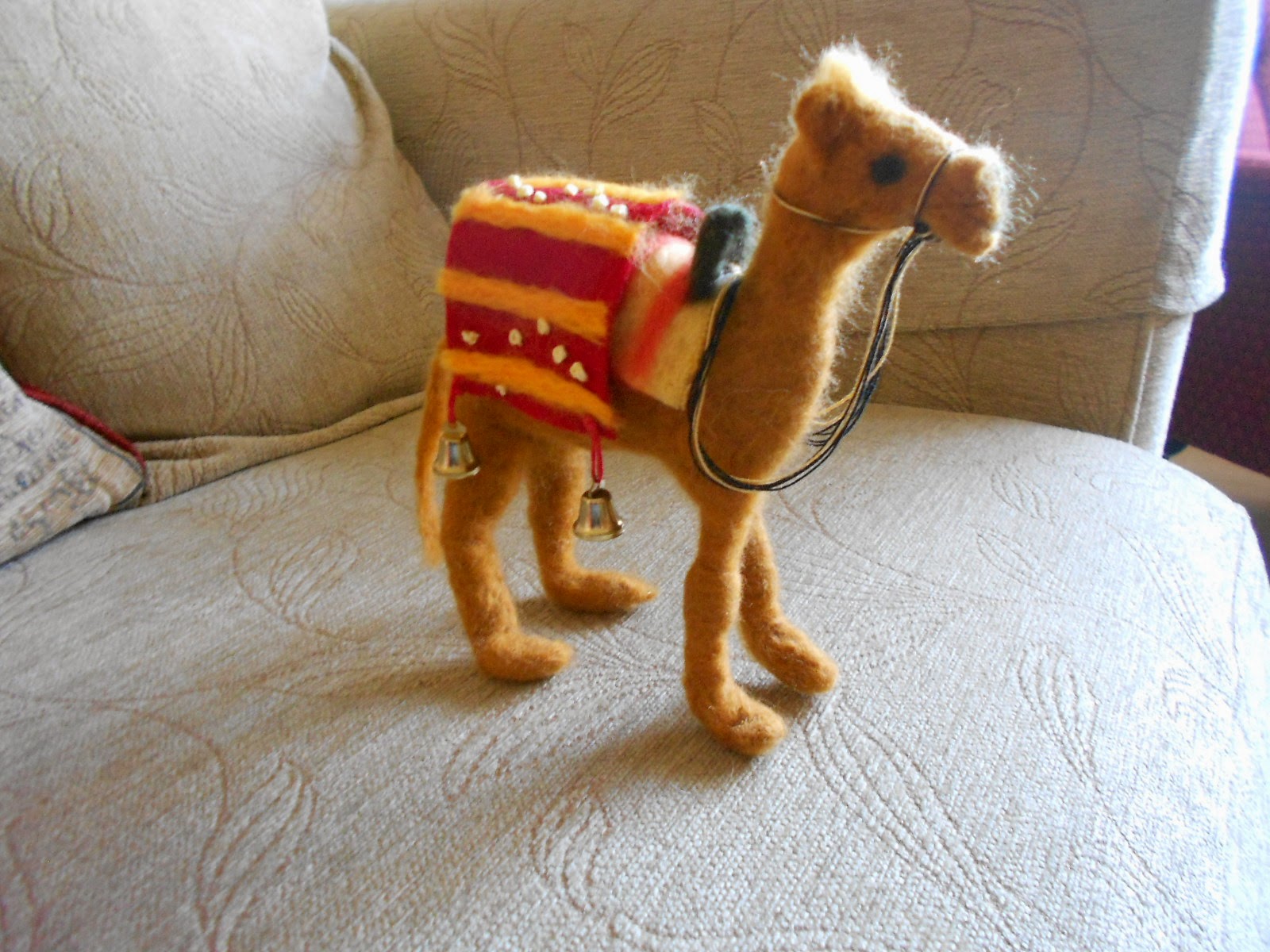 Somehow I think I may be having a menagarie as this is what my mum in law bought for my birthday,well she gave me pennies and these are what I bought. 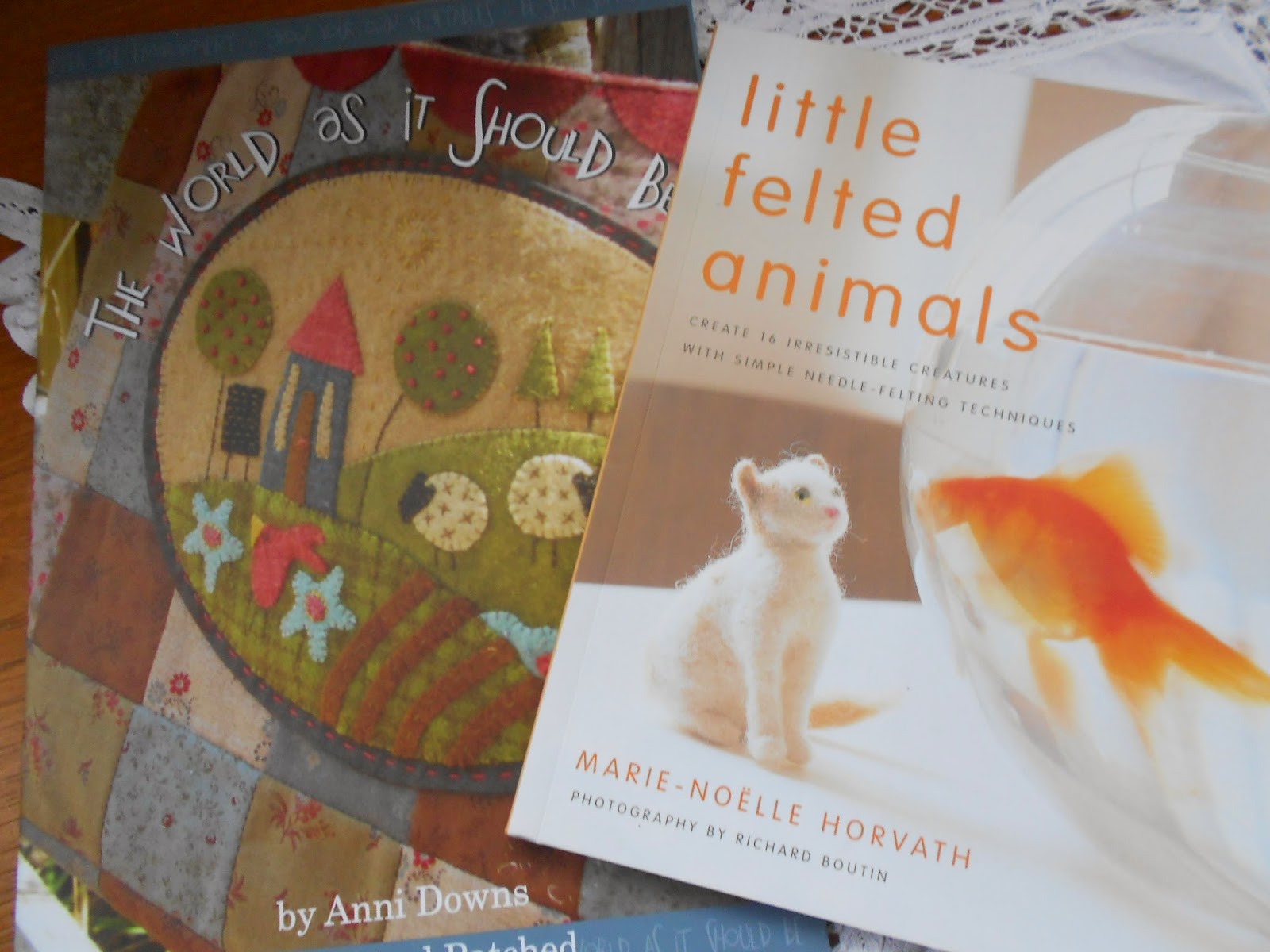 Also one called Wild and Tame needlefelt animals. The one in the background is an appliqued felt project. I showed you the sheep one I did and here is another I have finished., 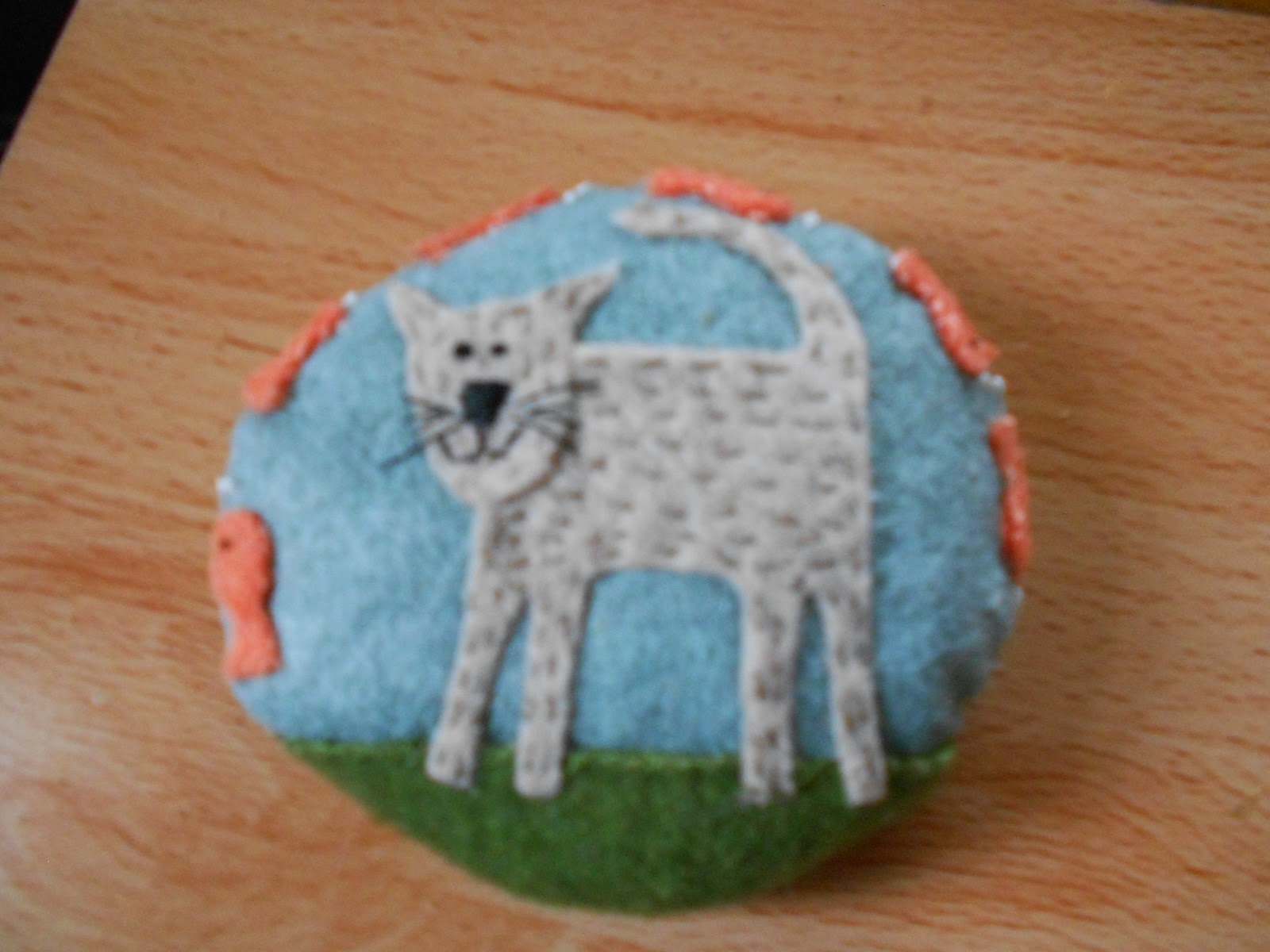 This is Claude the cat. Another pin cushion. I do have more finishes to show you but I had better catch up on the birthday that was ,as if I remember rightly I got called away to dry a very wet golden retriever. He has had another visit to the vets ,this time with a very upset tummy, eeeew not nice. He would not even eat his favourite biscuits so we knew something was wrong. He had a course of antibiotics ,some paste to squirt down his throat that looked like polyfilla! Special food was prescribed too which after the days of not eating he couldnt get enough of, However at £2 a tin , he only had 3 days on that. He is back to normal now thank goodness ,apart from his wretched feet, I think he will have to weat wellies.
You did not come here however to read about Ollies problems so I shall get myself back on track.
Back to birthday, I really was spoilt by family and friends alike. Martin took me to Abbotsbury on my birthday , just for a mooch round really but we went in the Wood gallery there and although it is on the expensive side we just could not resist this, It reminded us of our grandchildren ,especially Jack as he is now over 6ft. 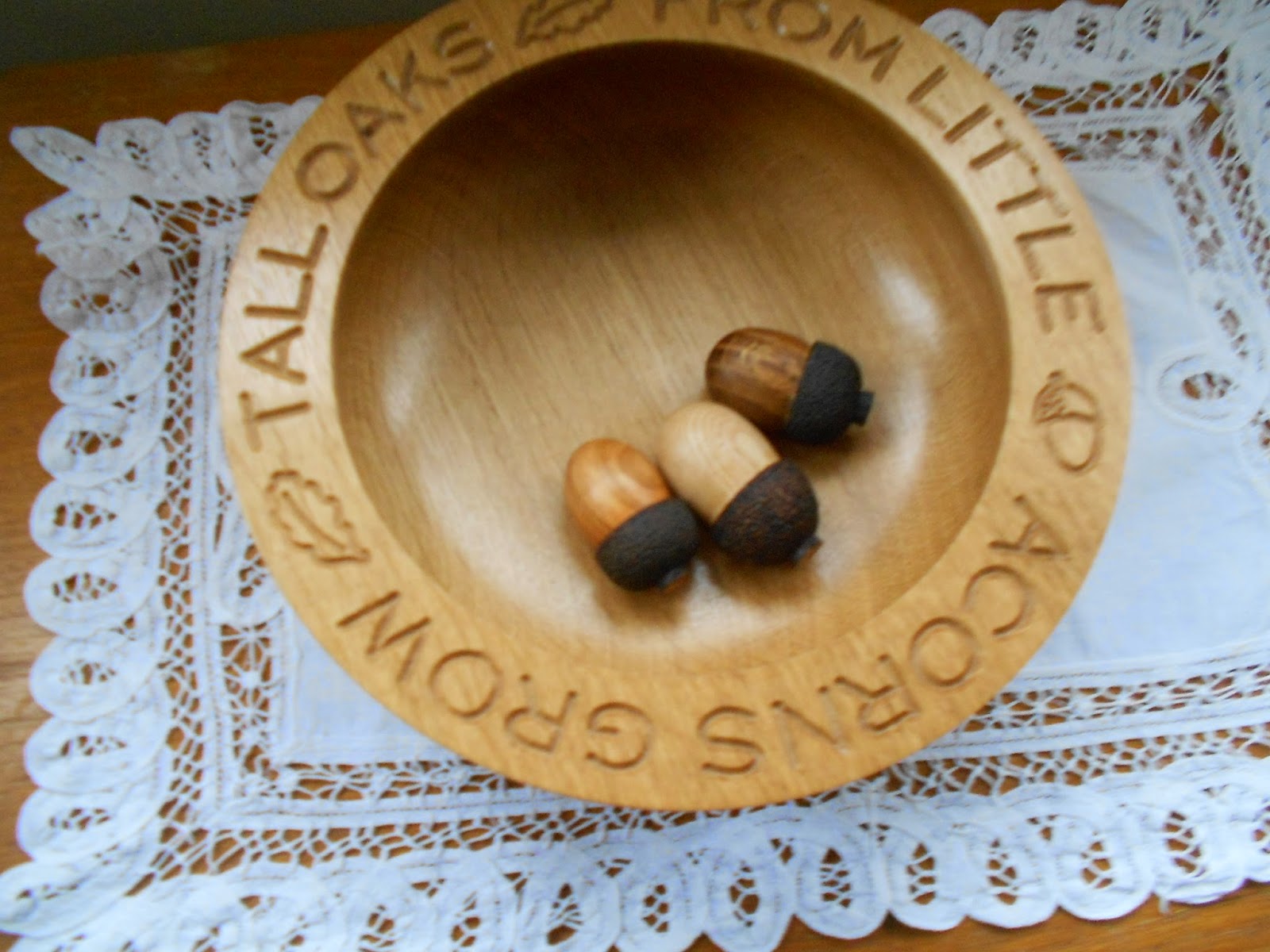 I am a hobbit or so he says , mind you with now becoming the shrinking woman I  shall be able to bite his kneecaps soon.
Caitlin his sister spent some of her hard worked for pennies on this dear little sheep. Very naughty of her but I love it. 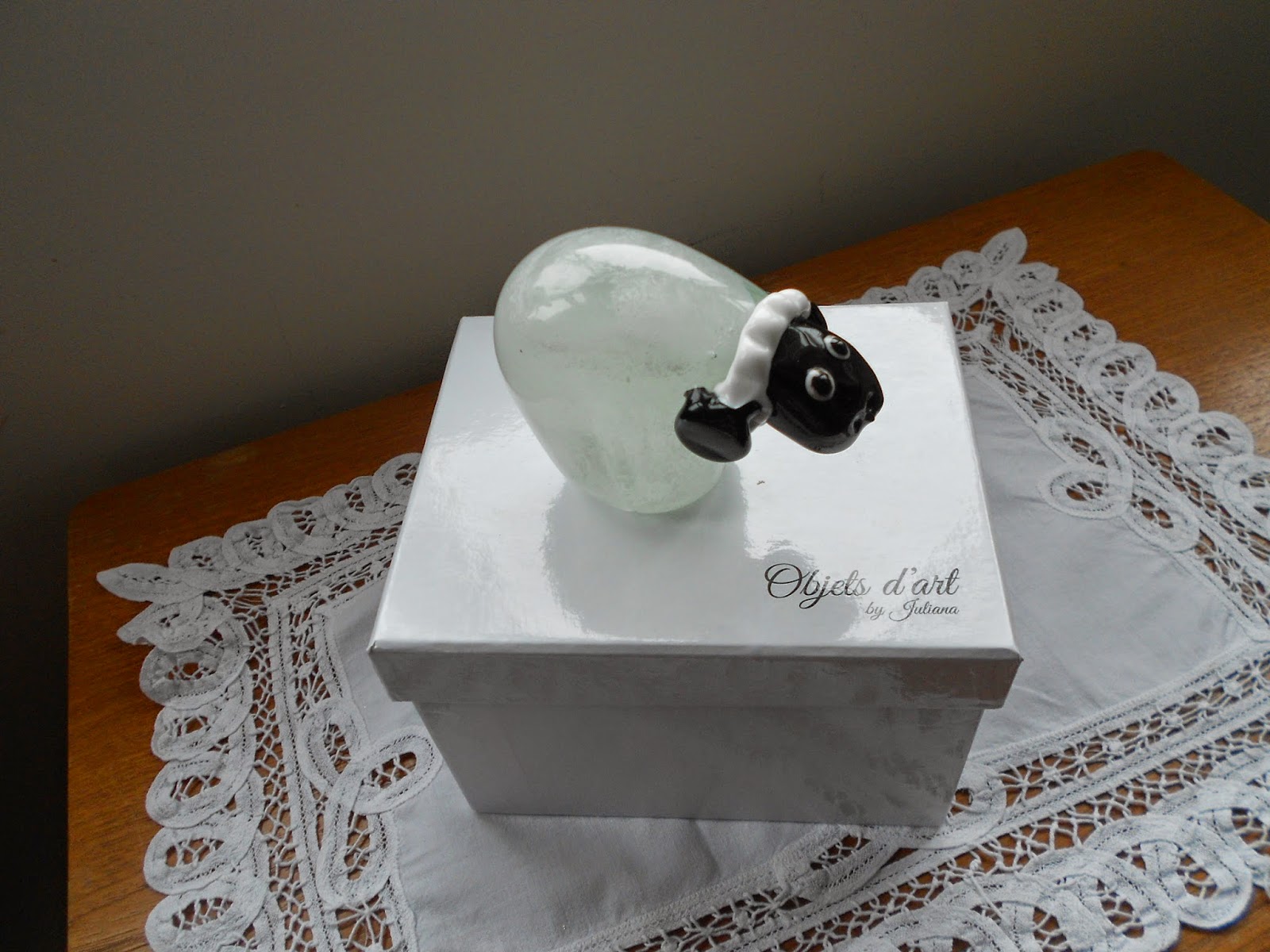 Isn't she fabulous. Some of my cards had sheep on I wonder why? 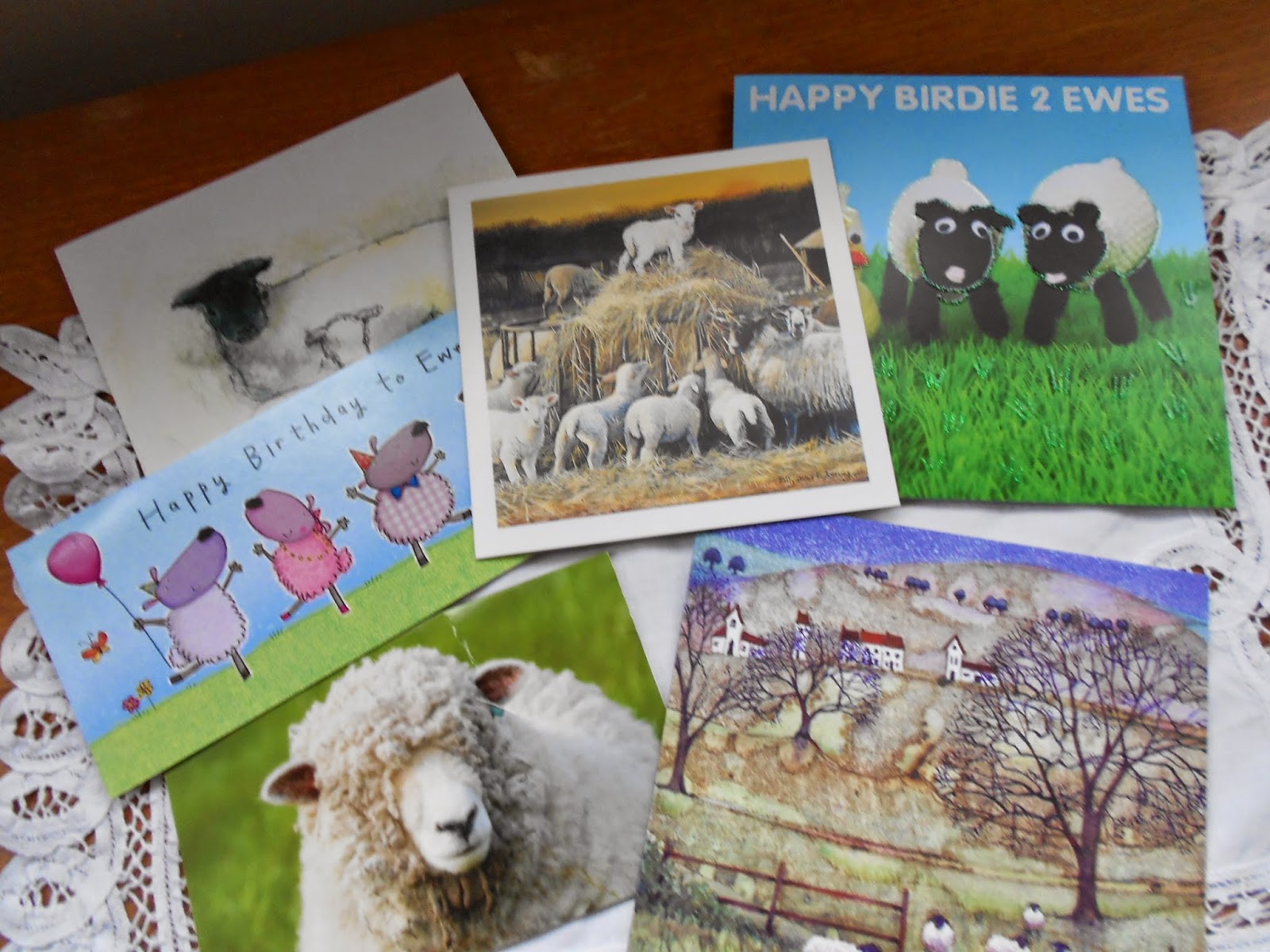 My 2 other grandsons spent their pocket money too Sam got me this and him and Alfie put together to buy me the sheep underneath. 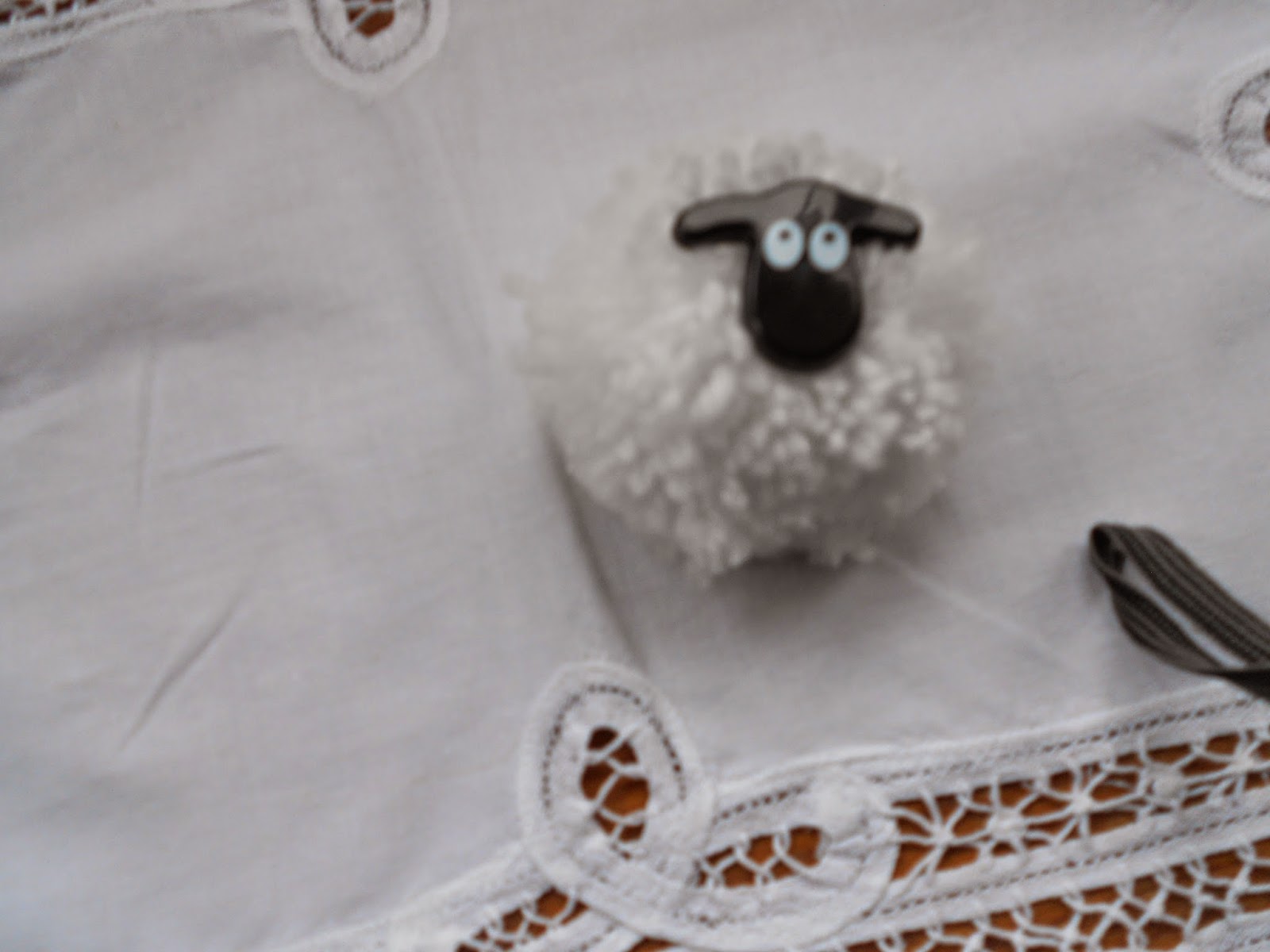 Sorry if I have sheeped you out. I have quite a flock now. 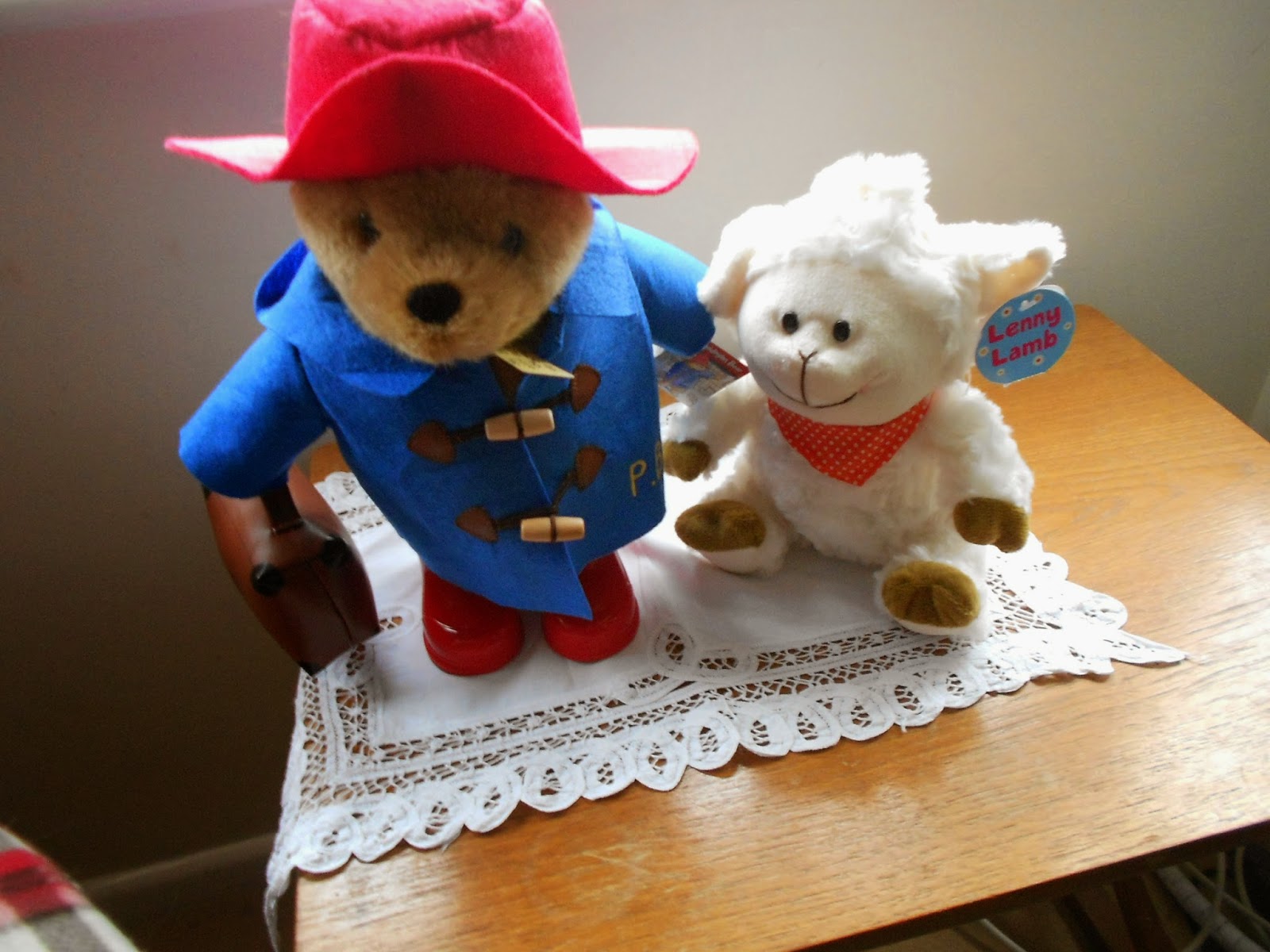 Just call me Bo Peep. Paddington was a gift from Ollie , I did have an original Paddington who stood on the stairs and surveyed all. I say did have because one of the dogs we had (not \Ollie) demolished his nose and so he looked sad and forlorn. Martin thought I should have a replacement but he said it is not as nice as the original one. Off to make a cuppa and I will make one for you too as there is more to come ,can you bear ,scuse the pun, to stay with me. Ok back and would you like one of these with your tea. 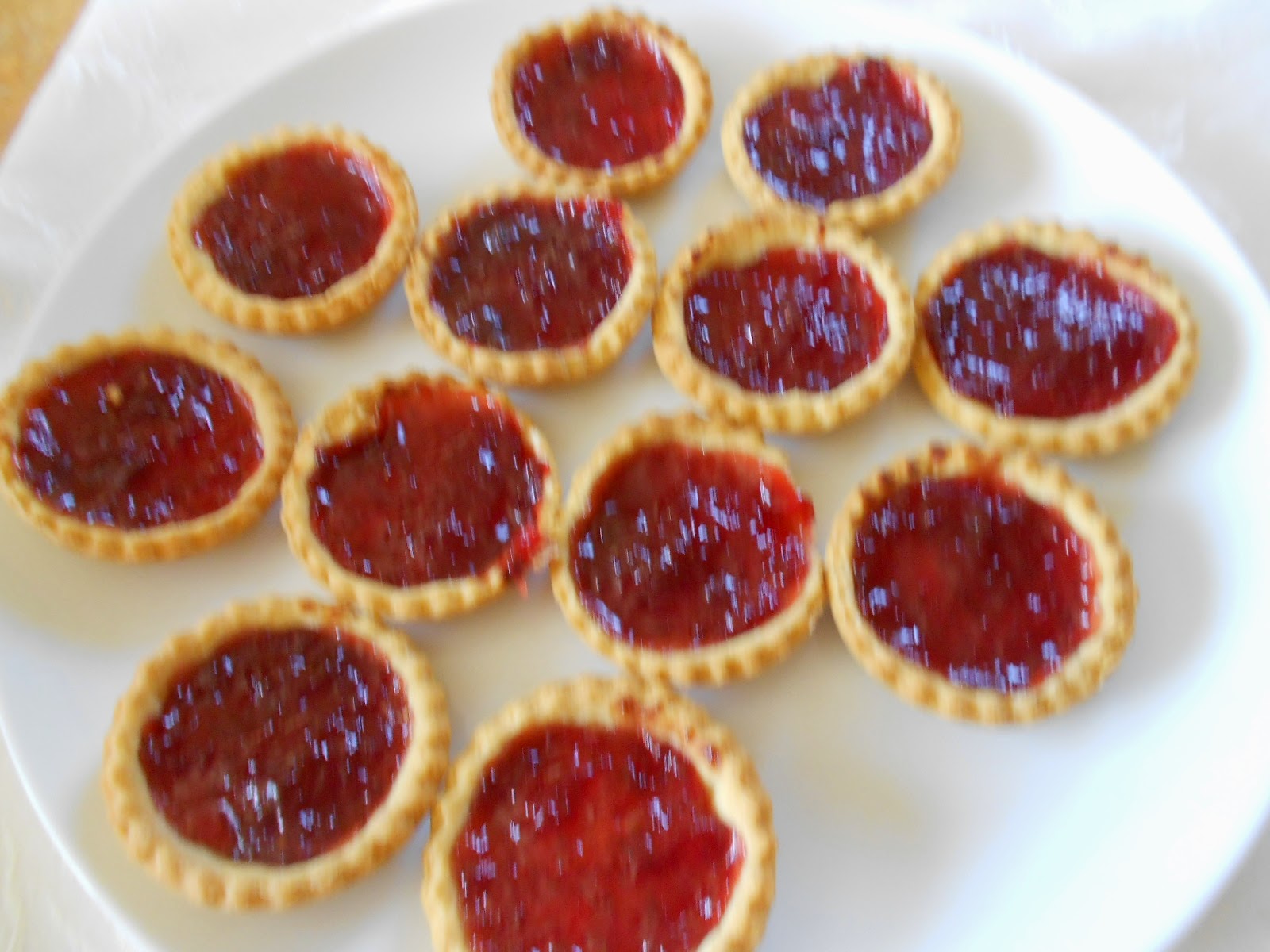 That is better now I will continue. Christine sent me a lovely little purse she had made and guess what it had on it. No you will never guess,a sheepdog , but a sheep on the other side. 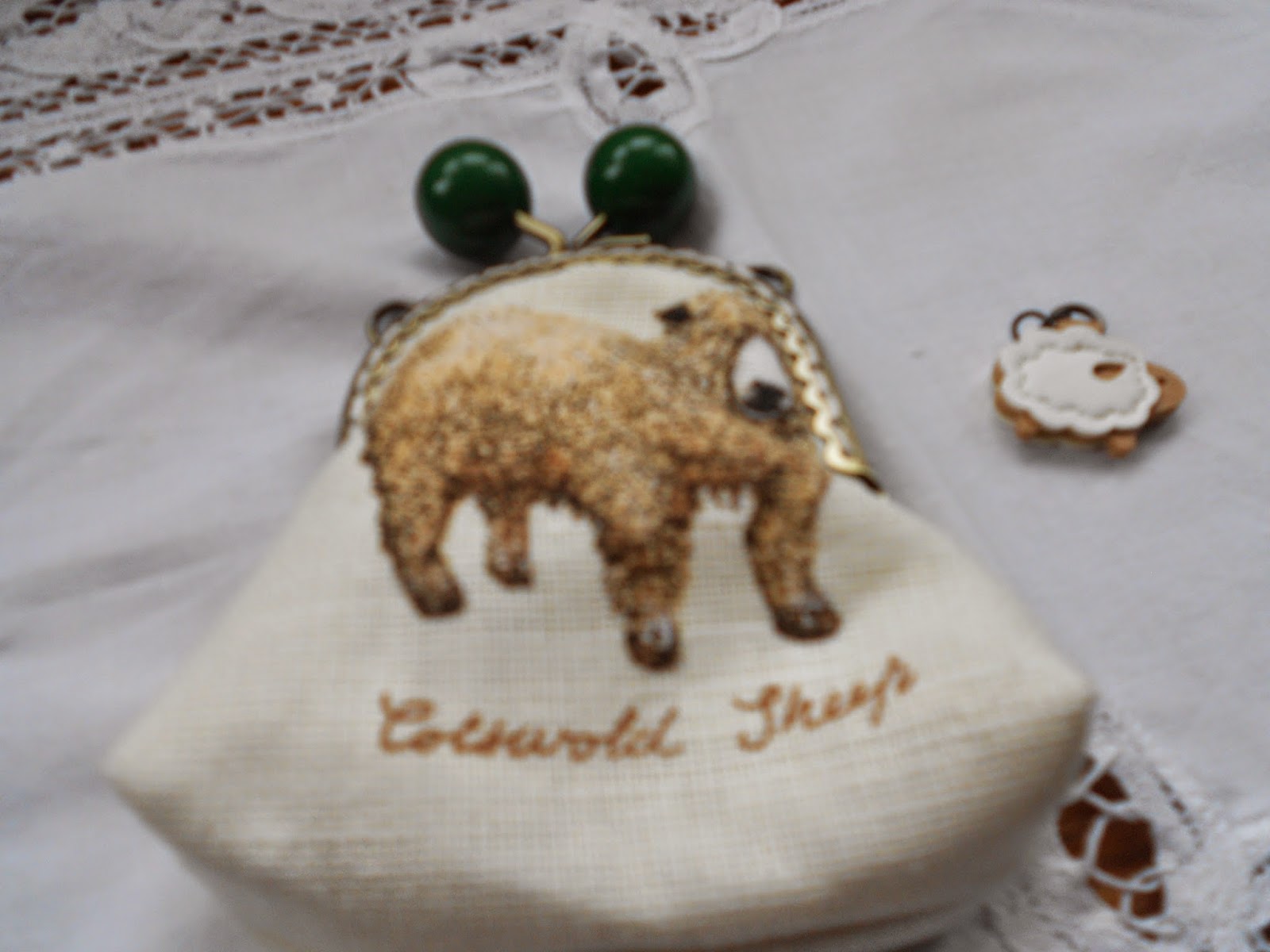 Thankyou Christine ,your gifts are always a little different,you are so clever. I also had gifts from Kate whose birthday is the day after mine. She sent me lots of lovely things too. 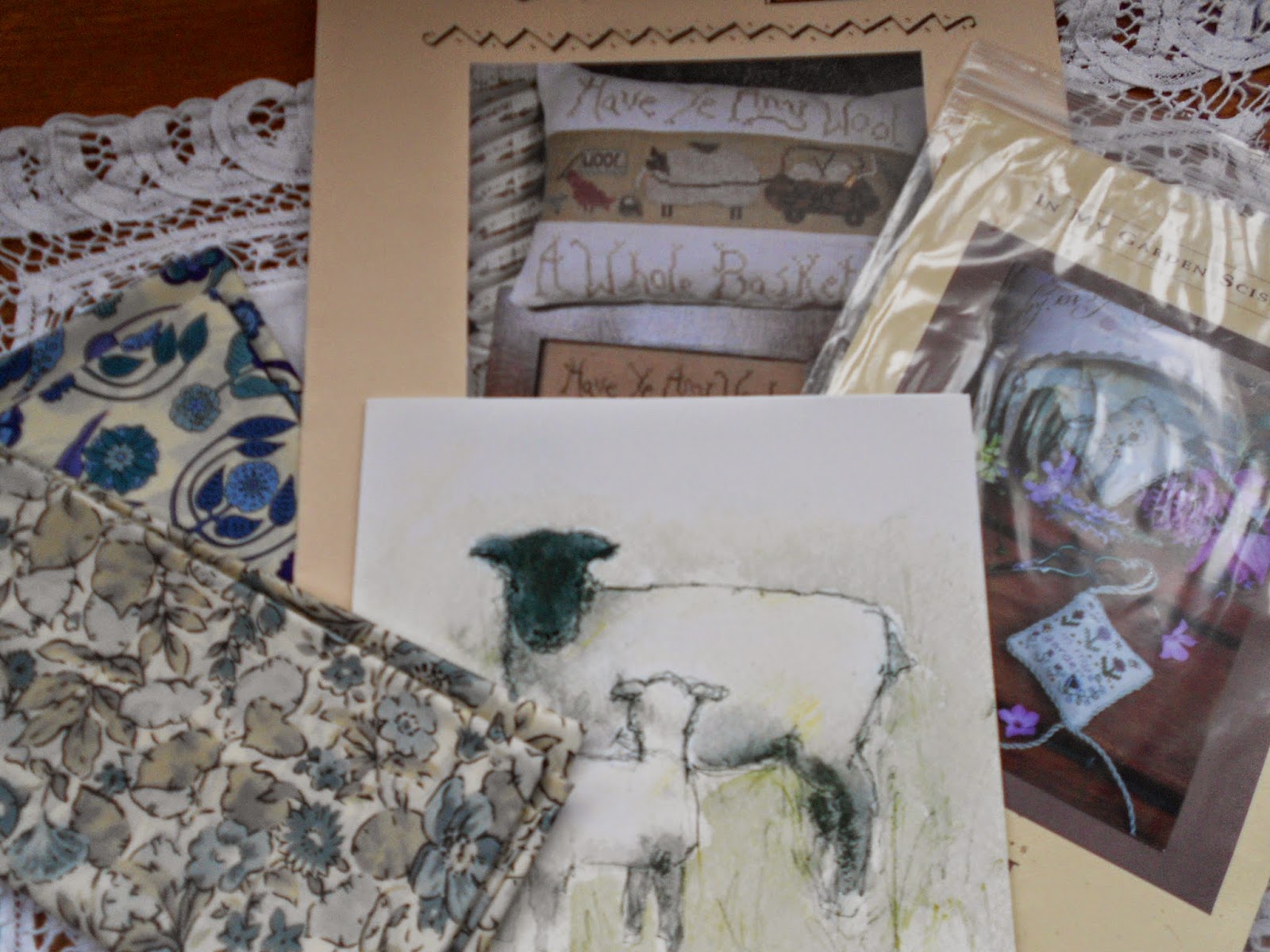 Loved that card and I shall have to maybe frame it. The charts ,kit  and fabric are  so lovely too. So I won't bore you with anymore birthday ,although I could I received 35 birthday card and some super
fabulous gifts so thankyou all once again. I just have to show you these couple of cards though. Promise no sheep.From Caitlin. 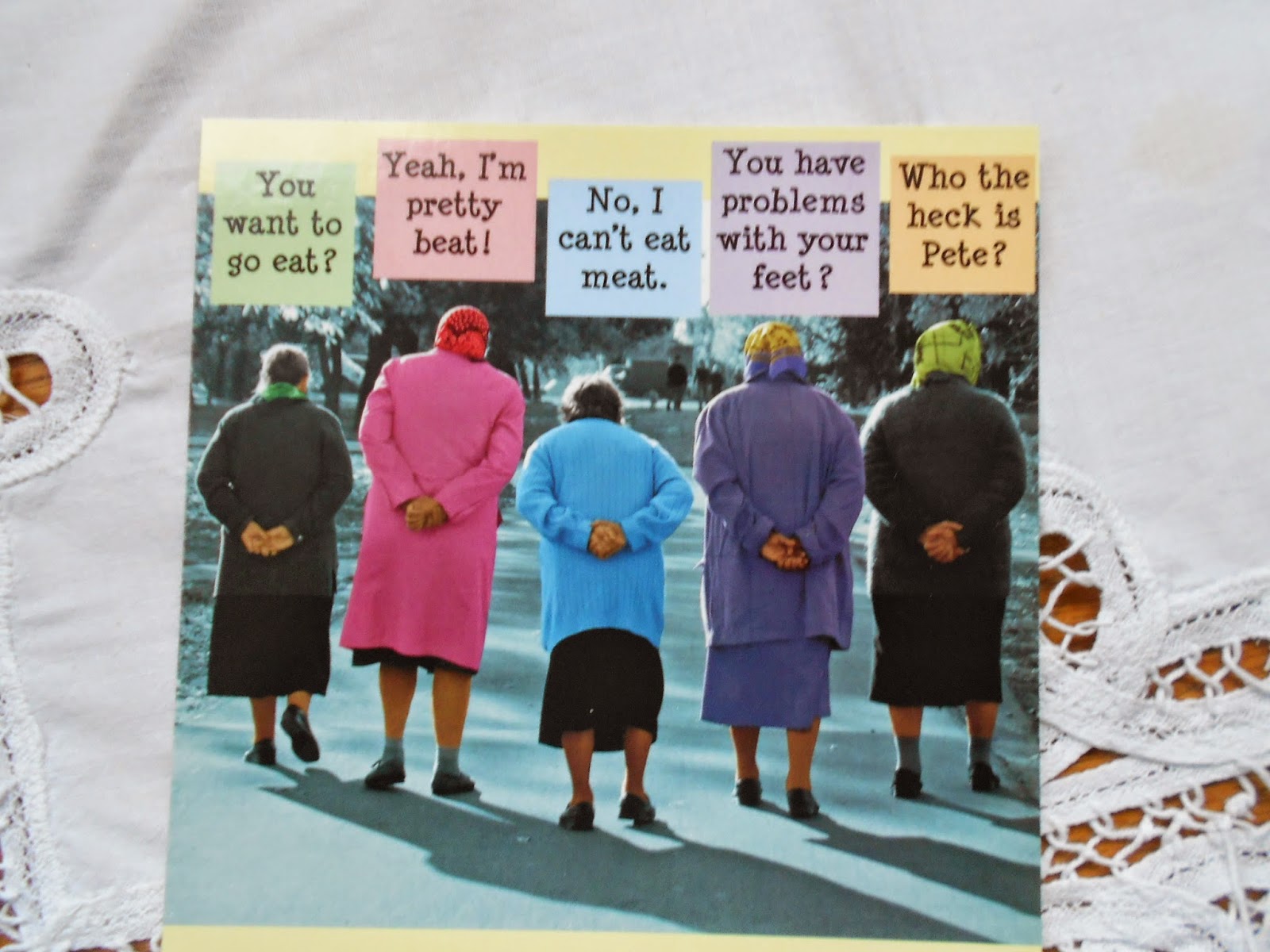 Is she trying to tell me something  lol. This was from my two youngest grandchildren. 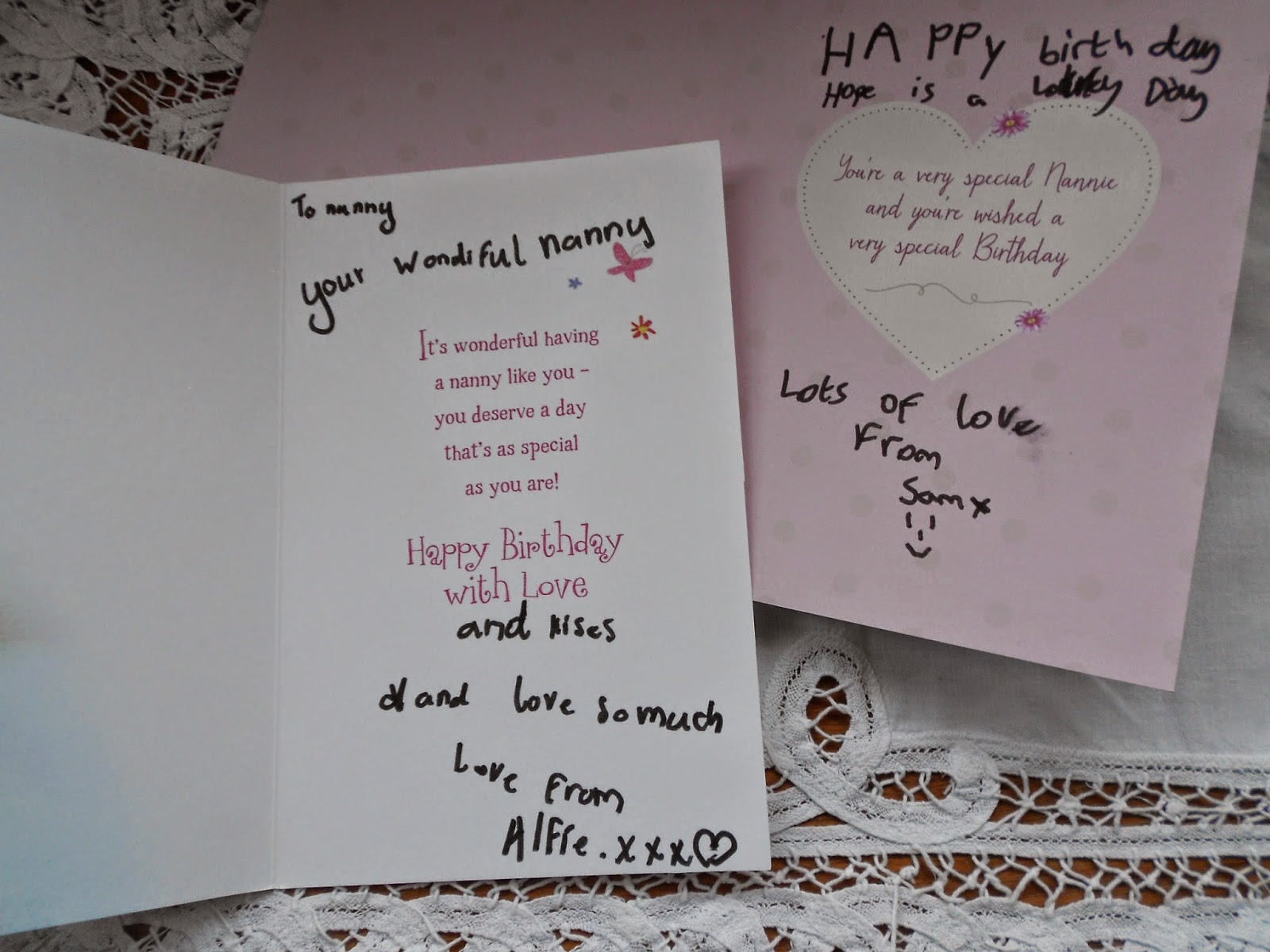 Awww gulp.
Well now what shall  I tell you well lets tell you about a couple more finishes. This is March and I put it together yesterday the 2nd. It had been languishing in the basket of procrastination for far too long .So when I saw Junes February ,it spurred me on to get on with it. So here she is pretty isnt she. 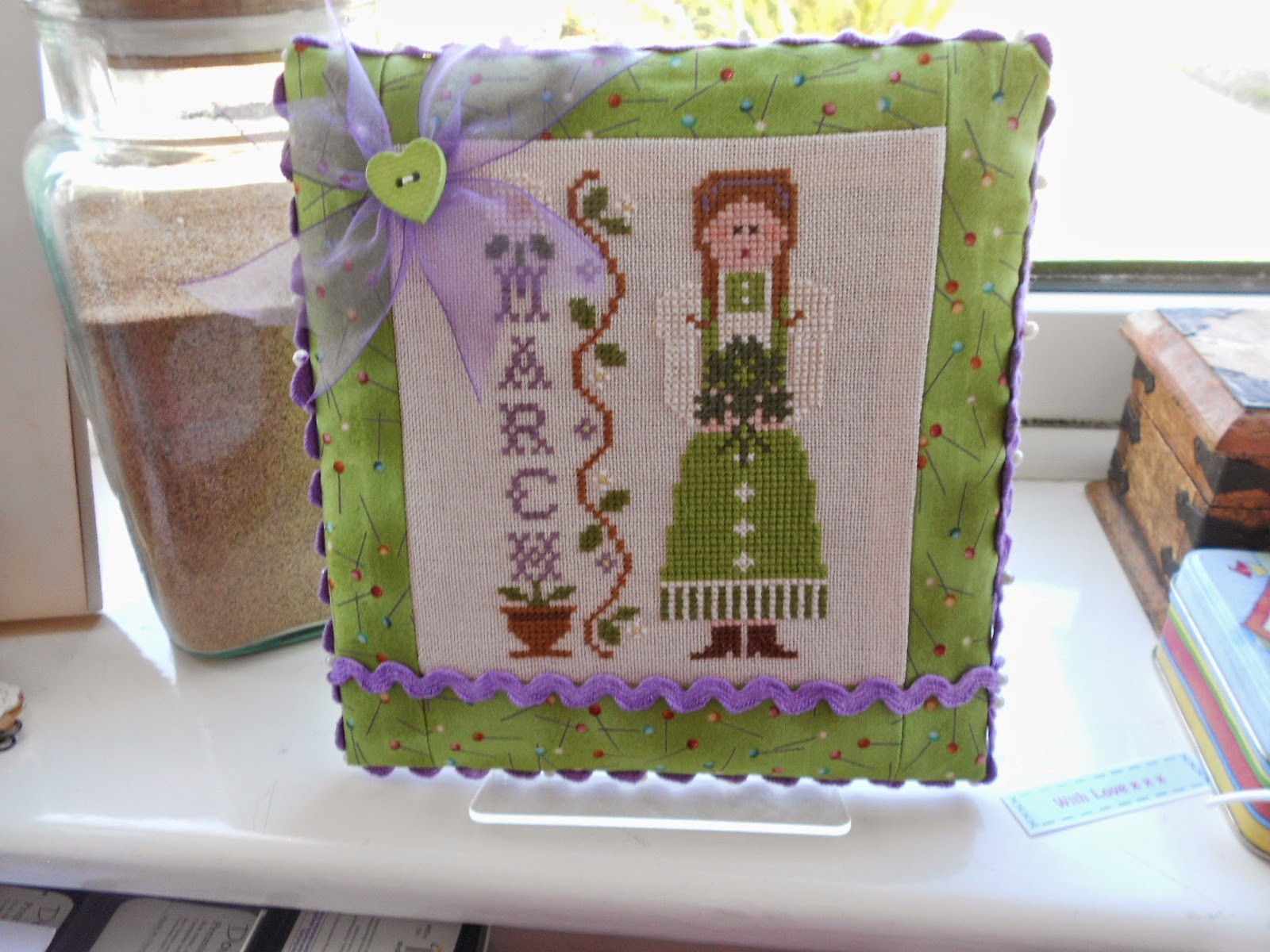 Last Wednesday in the parlour ,I could at last get off my knees, The stitchers prayer was finished.
As it was an odd size it was taken to the framer to be framed so you will see that next time. We took it to a man that lives in Upwey not far from us and outside his studio stands this. 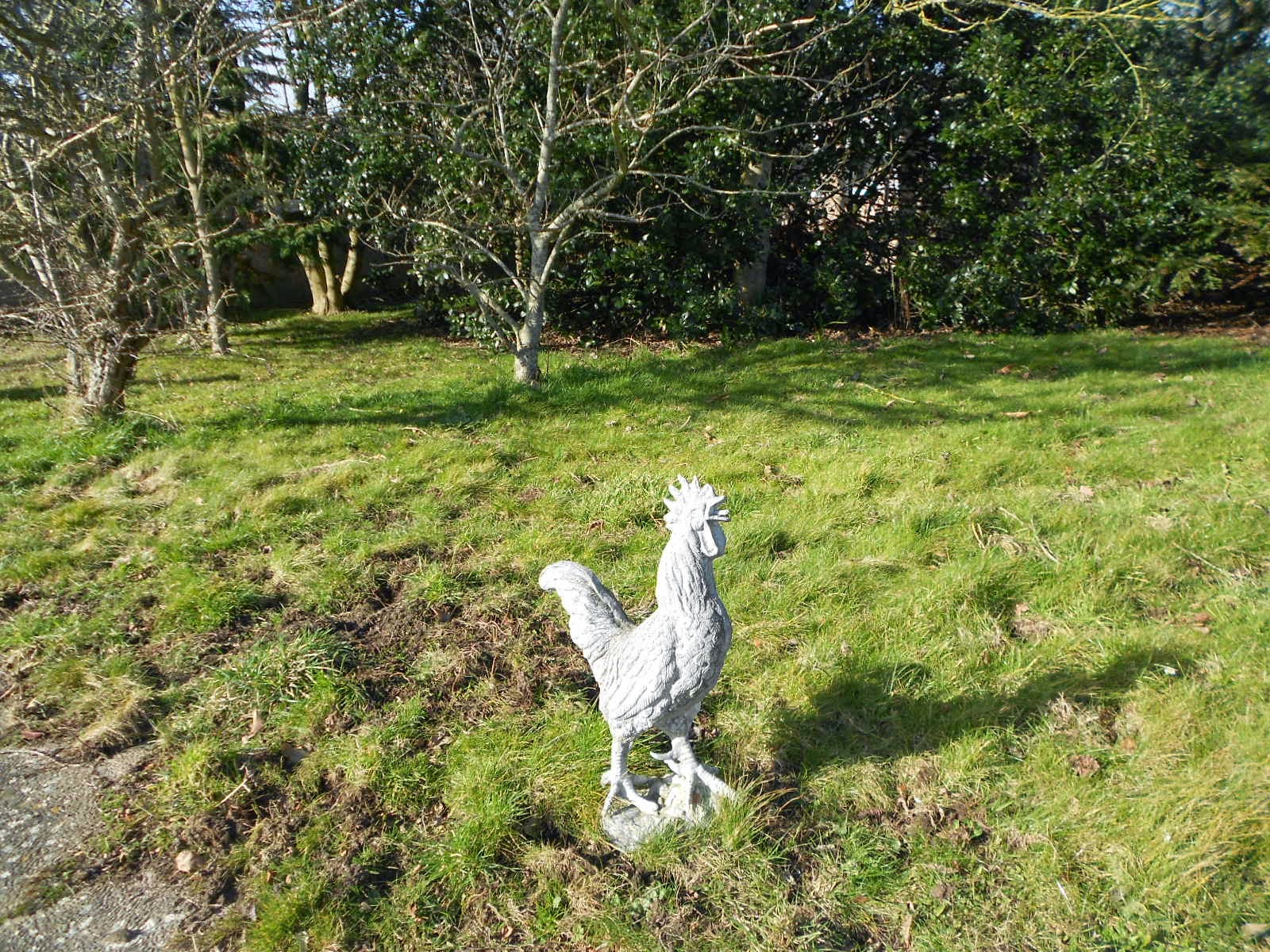 For a stone cockerel he was very handsome. The name of the studios is Cackleberry Farm ,so  very apt.I also finished the 2nd Hallowe'en themed sal that Sally and I do on Mondays. I also have finished No 3 today so that will be hot off the press. 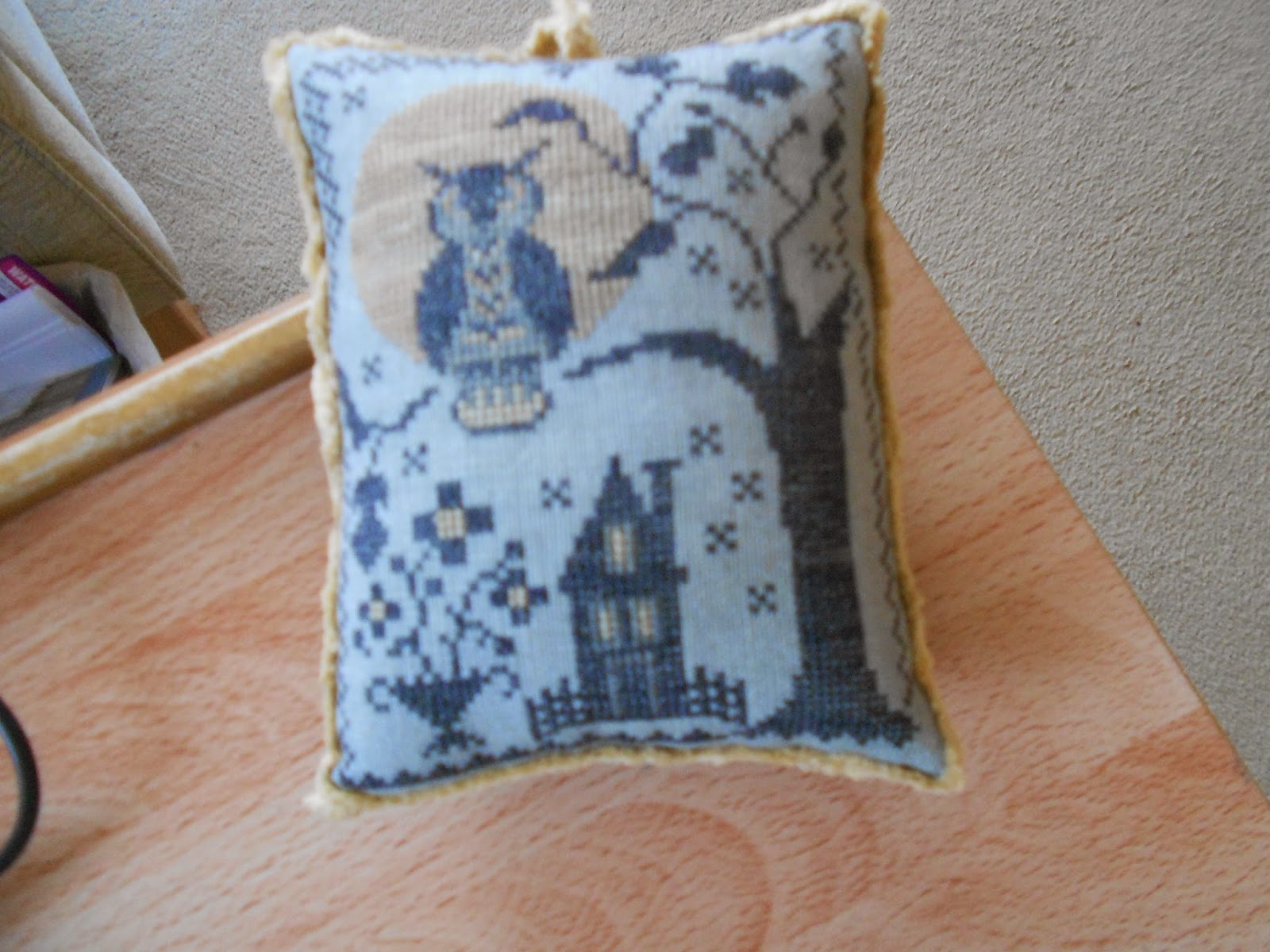 The fabric is a little darker than shown but I am pleased with it. I used chenille trim to edge it and I think Sally is doing the same. New starts last week was BBD sal on Needlecraft Haven . I chose Away we ride. This was my first weeks progress, 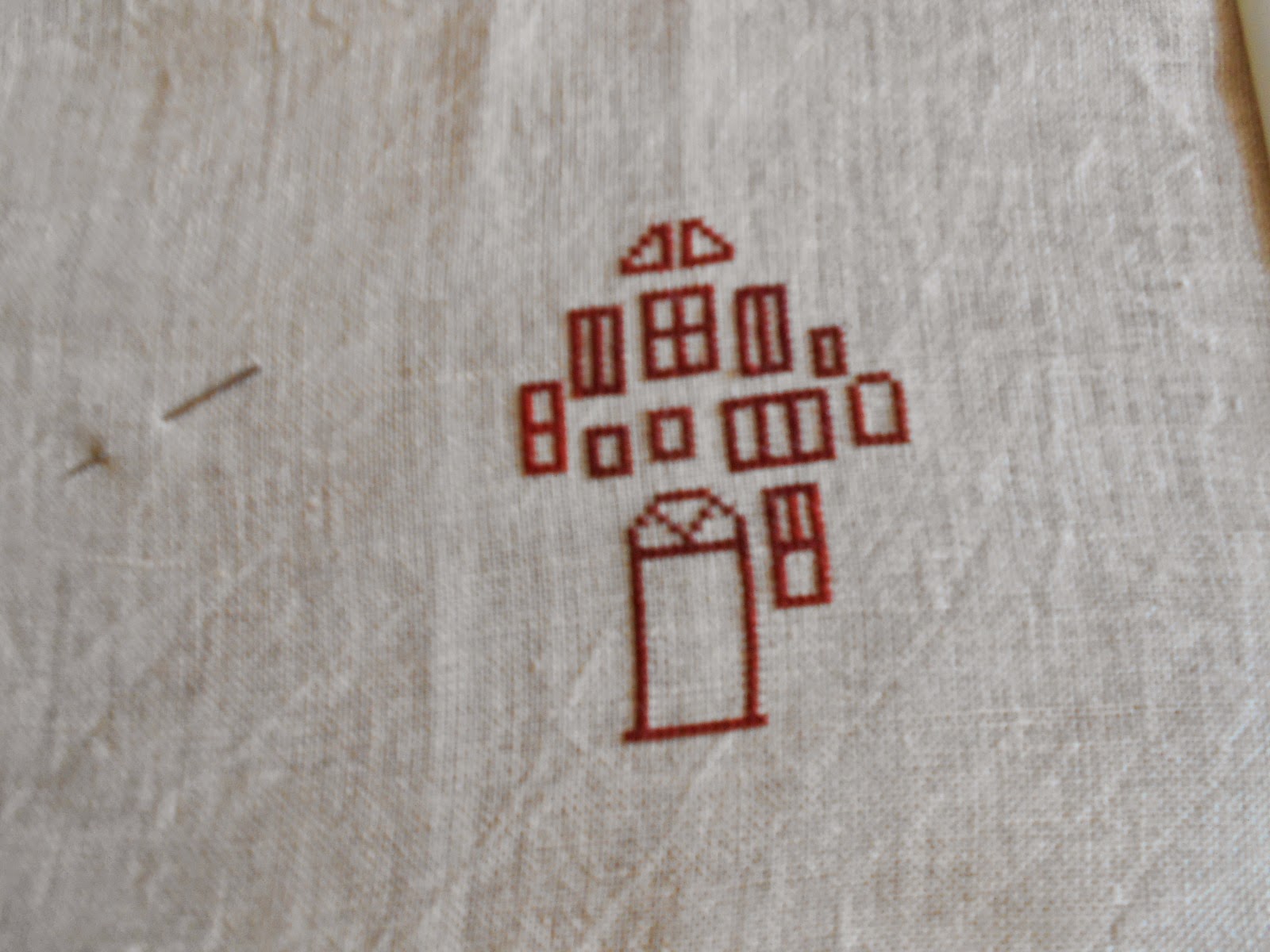 Not a lot but thank goodness it wasnt. I went to pick it up on Sunday and damn and blast, I had done it in totally the wrong colour so had t frog it and here is this weeks progress. 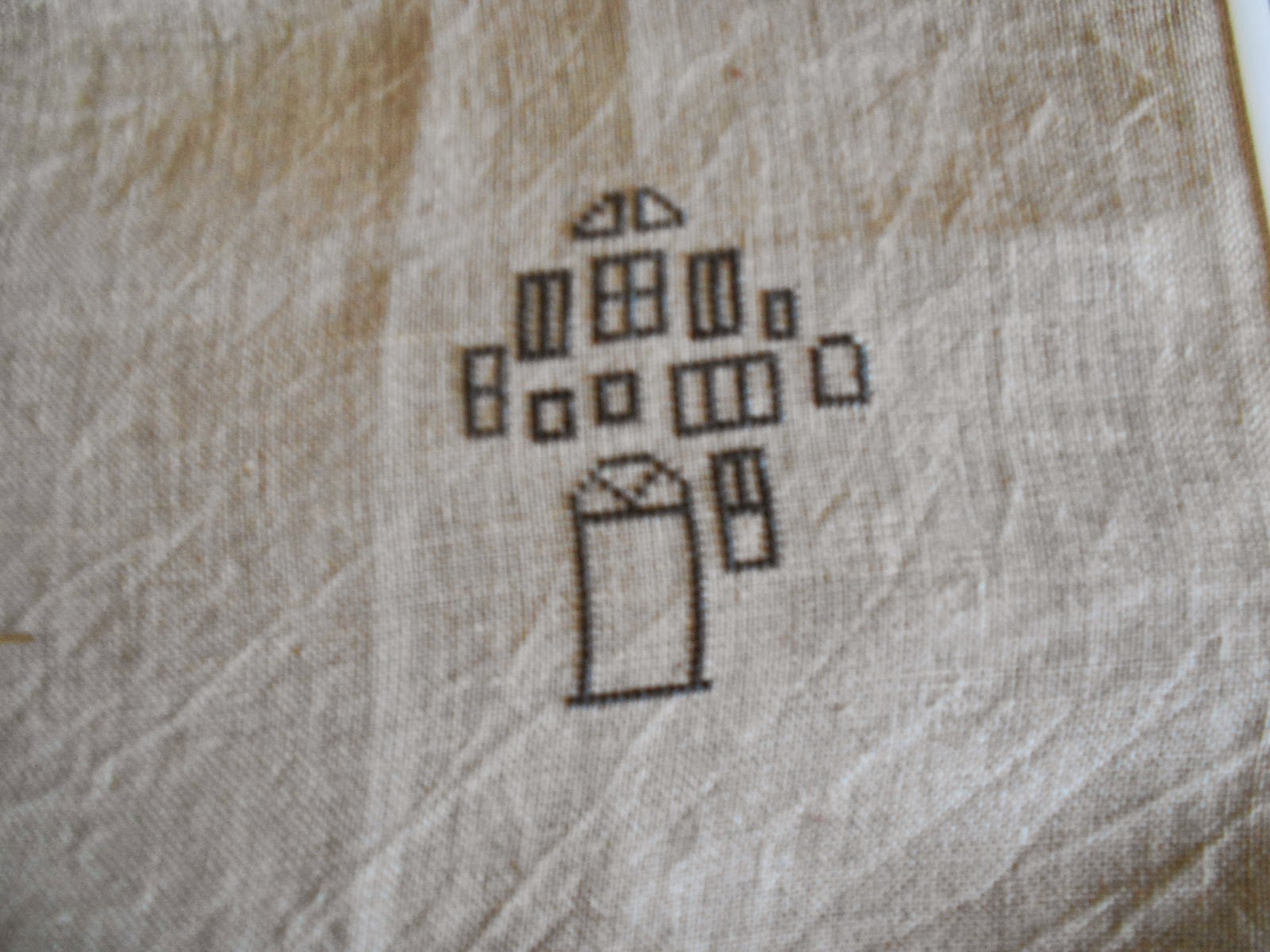 Must put right glasses on lol.I also had a monthly challenge finish with Christine over at NH and I finished it into a fob. 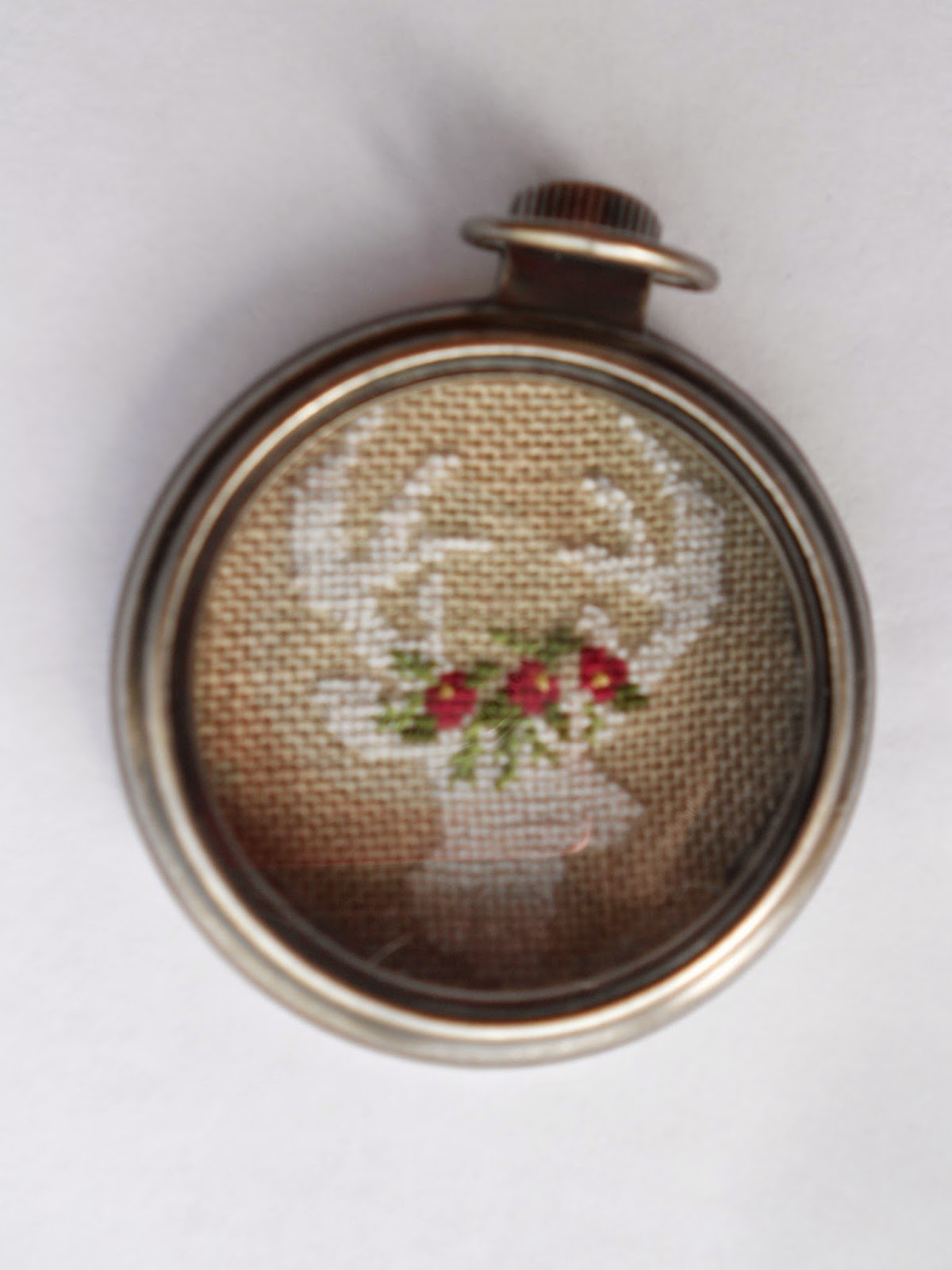 I just managed to fit it in here, I must make a start on this months. Only 2 more finishes to show you, have i been busy or what. Well here is Dear Santa the other Sal I am doing with Sally ,not made up yet as I am awaiting fabric which hopefully will arrive tomorrow. 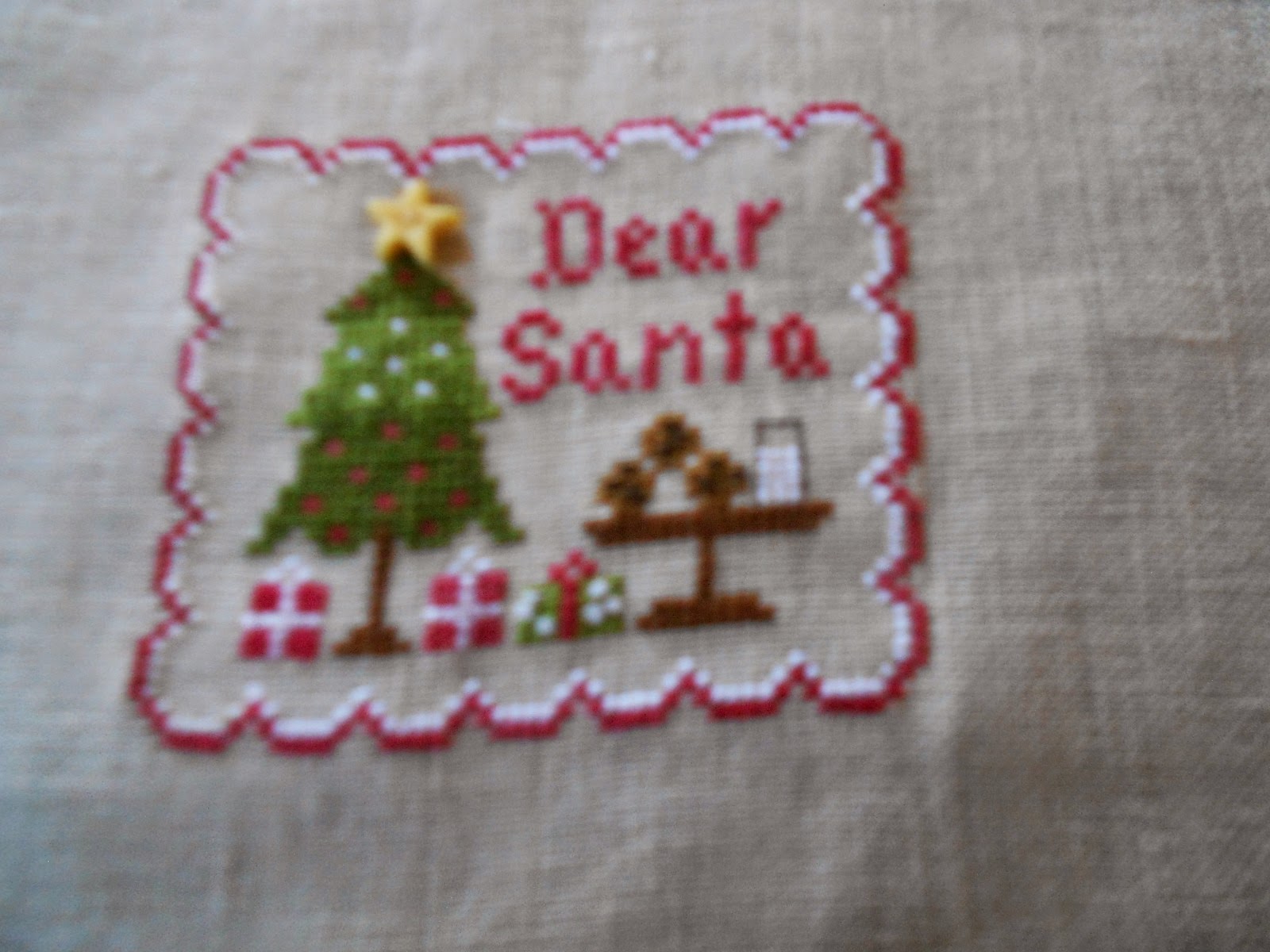 The next one is a finish I have not really attempted much before, Backing fabric and ric rac came this morning and as I finished my witch last night here she is finished and made up. 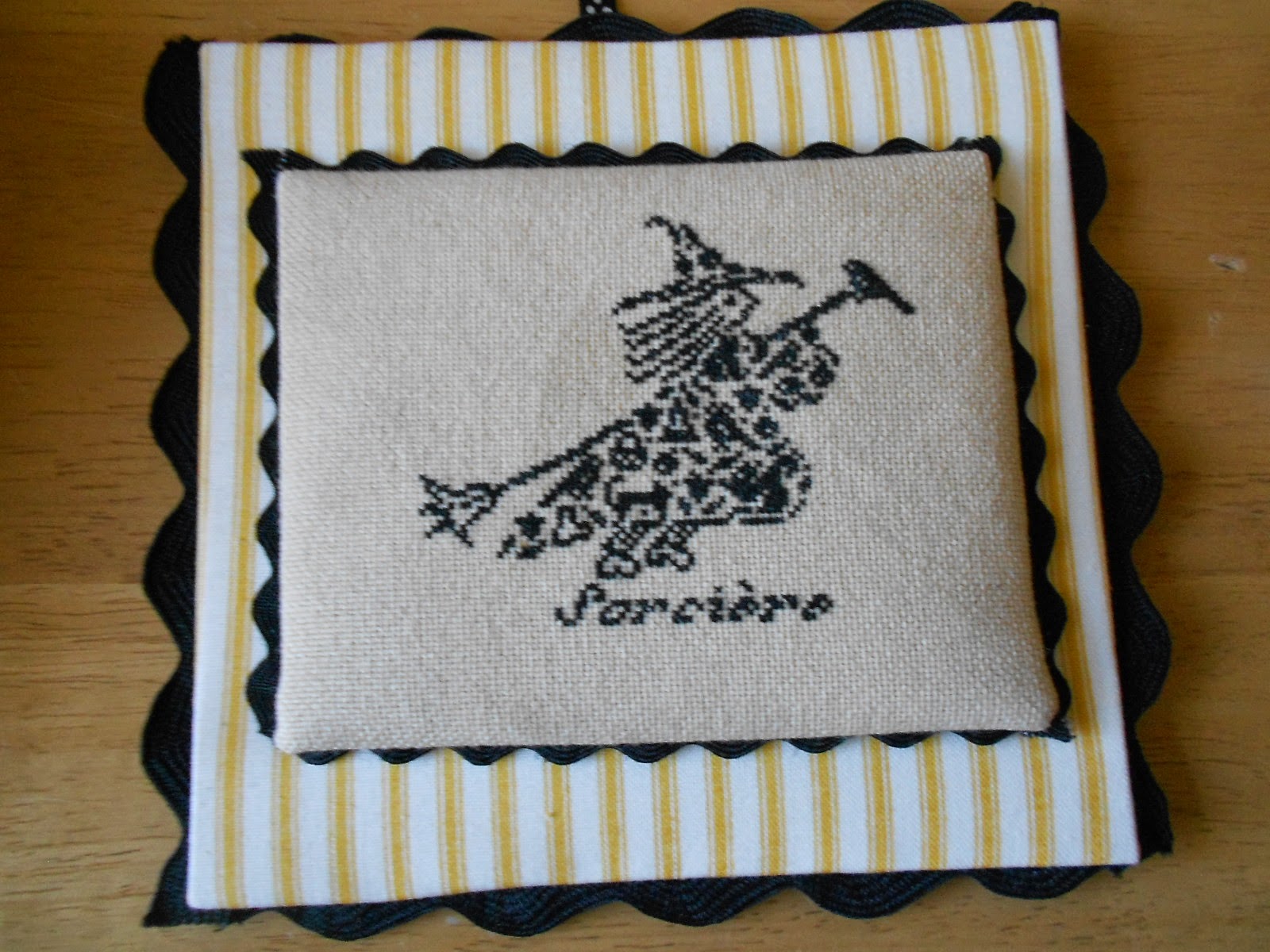 I am very pleased with this one. What do you think Sally? Well almost time for me to leave you but before I do ,the picture on this month on the Susan Branch calendar is this. 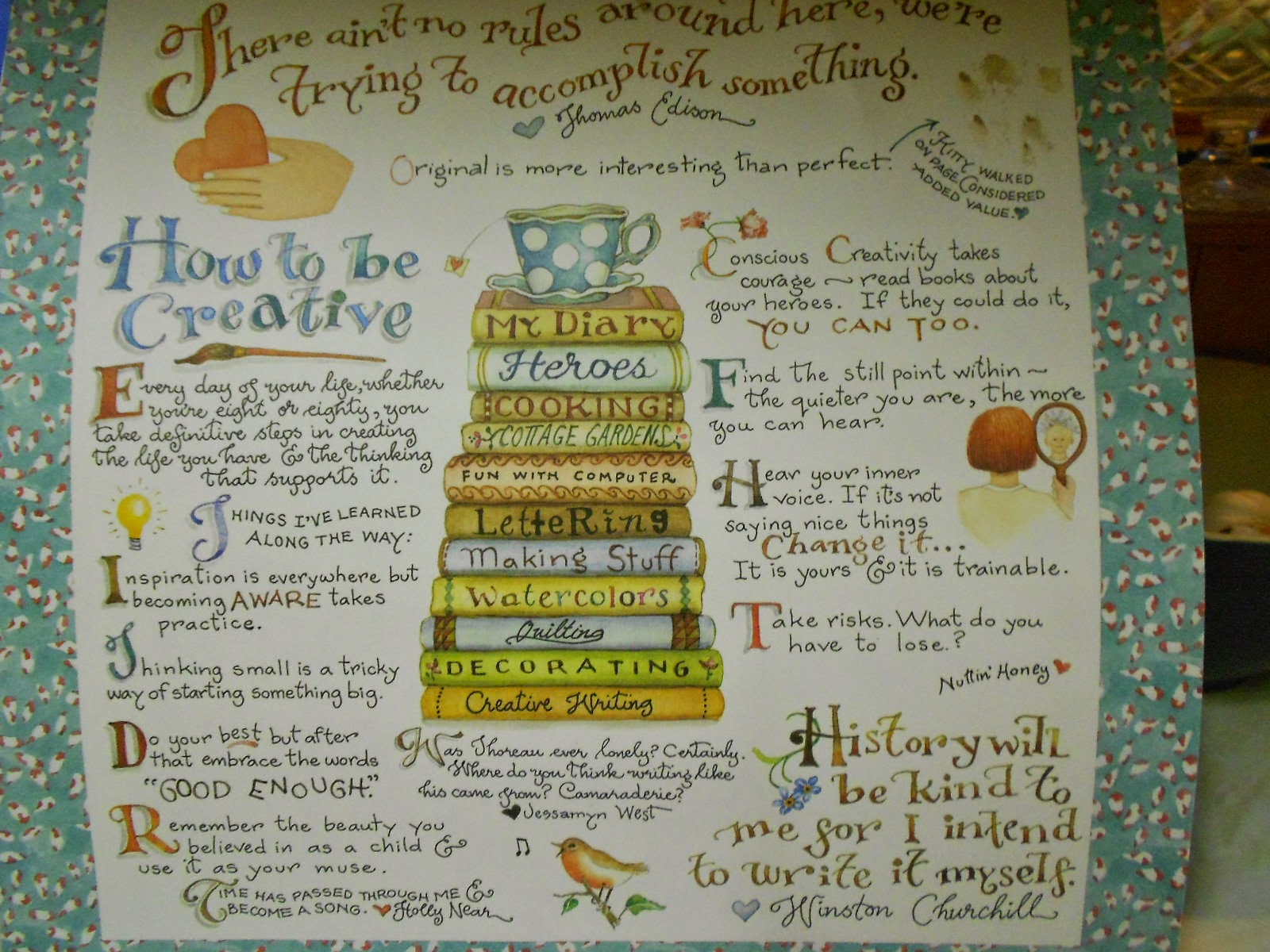 So right for the creative month I have had. Some flowers to speak of the season . 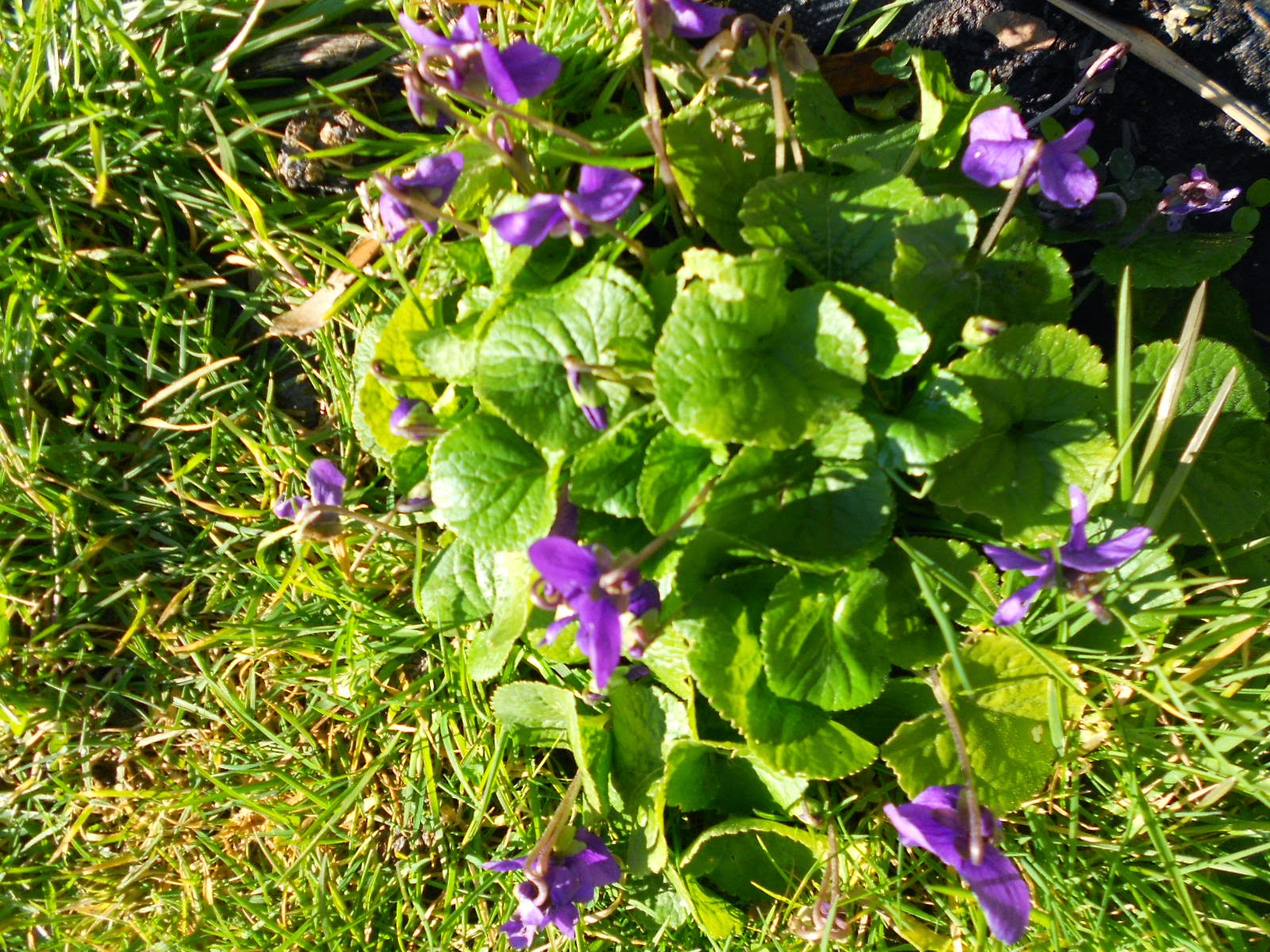 I just love violets. Daffodils are a must at this time of year and a little brown jug is all they need. 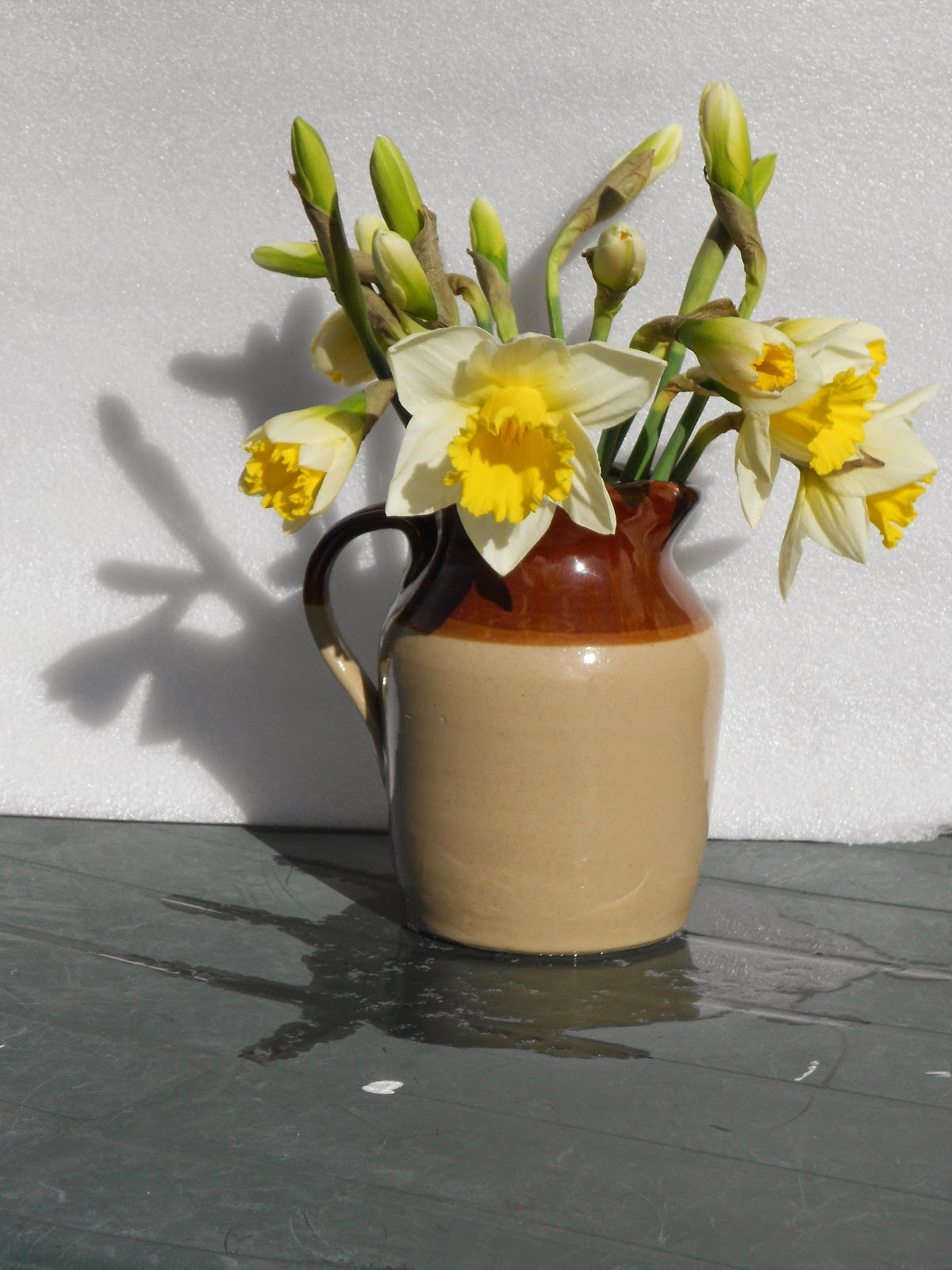 So there you have it the last time I spoke to you to this , Hope your weeks have been as fuitful as mine , take great care ,leave a comment if you can squeeze in a moment ,they are read with much appreciation. Oh and a P.S for Angela , If you would like to know about the Jane Austen tours in Lyme go to Lyme Regis walking tours ,it tells you all about it.
Much love to all
Barb.xx
at March 03, 2015

What a wonderful, goody filled post my dear friend. Lots of lovely sheepy bits ( I wonder why!! Lol ) and lovely gifts.

I LOVE your Halloween finishes. The witch looks fantasticand it looks like we may have chosen the same colour chenille!

Your fob looks so pretty. Love your BBD start. What a shame you had to frog though.

Lovely Flowers, and lots of lovely stitching. The felt animals are adorable xx

Oh my! You have done so very well on the small animals.
My, my, you have been busy.
I love wild violets.

Glad you liked your present Barb.
Lots of lovely projects in this post, the needlefelted hare is adorable

Another lovely post with lots of goodies WOW .
How cute are your felt ornaments so sweet.
Love all your stitching and the march girl is beautiful love your finish I am still working on my one
Beautiful flowers from your garden hugs.

Lots of lovely presents and cards and plenty of gorgeous stitching too. I enjoyed my read.

What a great post!!!! Love your felties. and your finishes.

What an enjoyable post birthday account Barb. I'm so glad Ollie is feeling better.
Your gifts were lovely ( mine has finally gone in the post!!) To start with, I adore your gorgeous felted animals. The hare really is full of character and your camel is delightful. I have my eye on the lovely cat though on the front of that book. My sons girlfriend adores cats....haha!!
What wonderful birthday presents. Your ever growing flock of sheep is amazing. The marbled one is beautiful.
Lots of lovely finishes. I really like the witch finished with the ric rac. It's one of my favourite ways of finishing. The backing fabric is perfect.
Thanks for the tip on the Lyme tours. I went online after you mentioned it and saw they are on nearly every month. I have been promised a little trip as soon as we have some better weather and maybe a return visit to Weymouth...yippee. Xx

Sounds like you had a wonderful sheep-filled birthday. Beautiful finishes. Haven't had a jam tart in years. Mmmm.

Happy Belated birthday! Such wonderful sheepy gifts from everyone! Love the little felted animals. Two of the teachers I work with actually had an art lesson and taught the kids how to felt. It's quite fascinating to watch the kids be so focused on felting! Hugs to you!