Broadchurch and a Birthday

Hello everyone,  Well lots to show you again this time so be prepared!!
Not sure where to start, I think the trip to Broadchurch /West Bay , We decided to go see the Blue House which housed David Tennant in the series, I think it is up for sale for Mega bucks. Crazy money for what is just a river hut,I suppose it has connections that people will pay for ,but me no way would I pay the price they are saying it is worth. Here it is and some other pics of West Bay. If you haven't watched the series , sorry you will not have a clue what I am waffling on about. 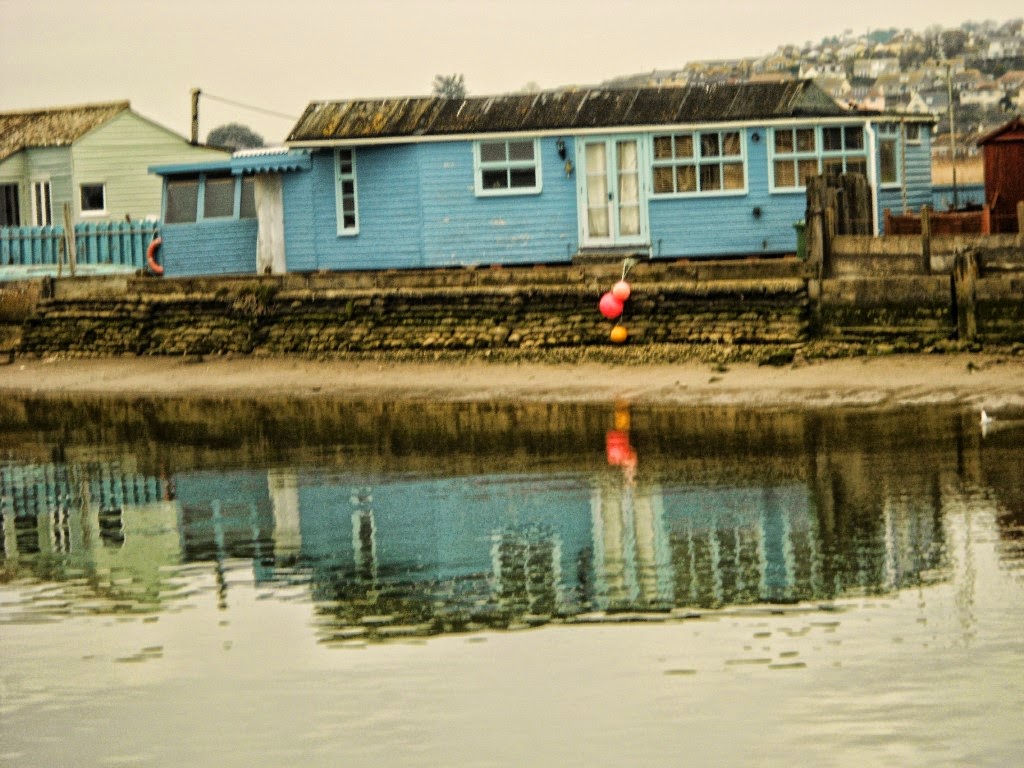 We did not see David Tennant here today though. Then I took a pic of the solicitors house,but no way was I climbing that hill. 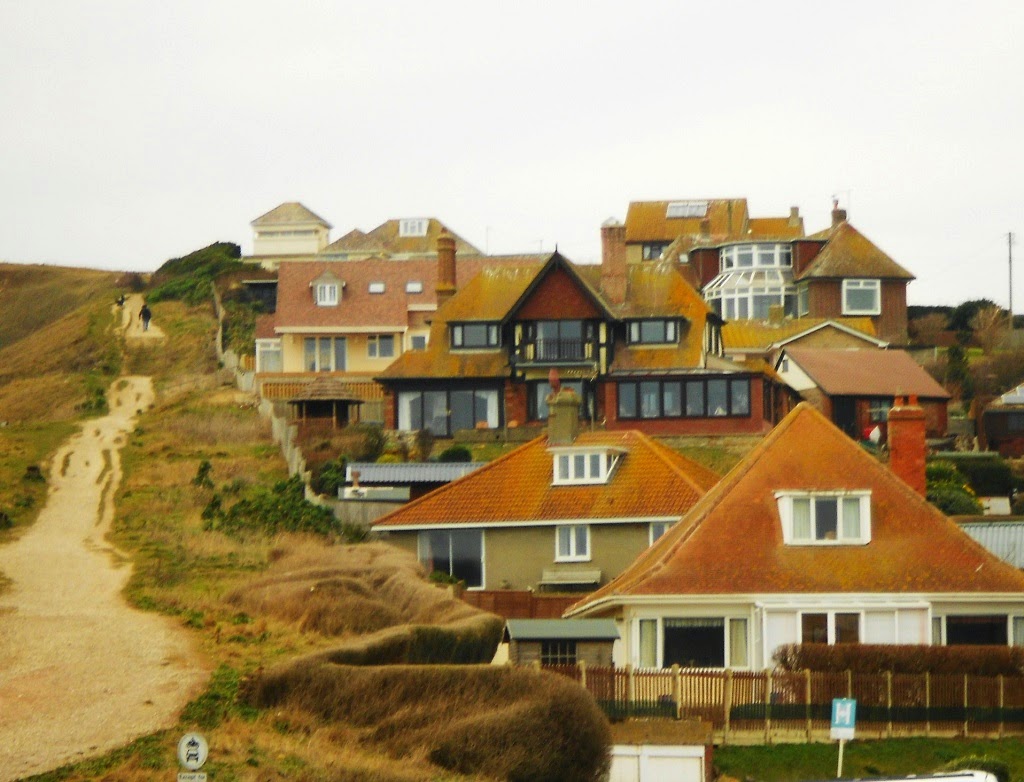 It is the one at the top. West Bay is not what I call a pretty place ,but it does have a certain character.
For a winters day it was relatively busy but  in the summer it is like most places on the coast ,busy. The townspeople were busy sprucing up boats and painting their cafes. 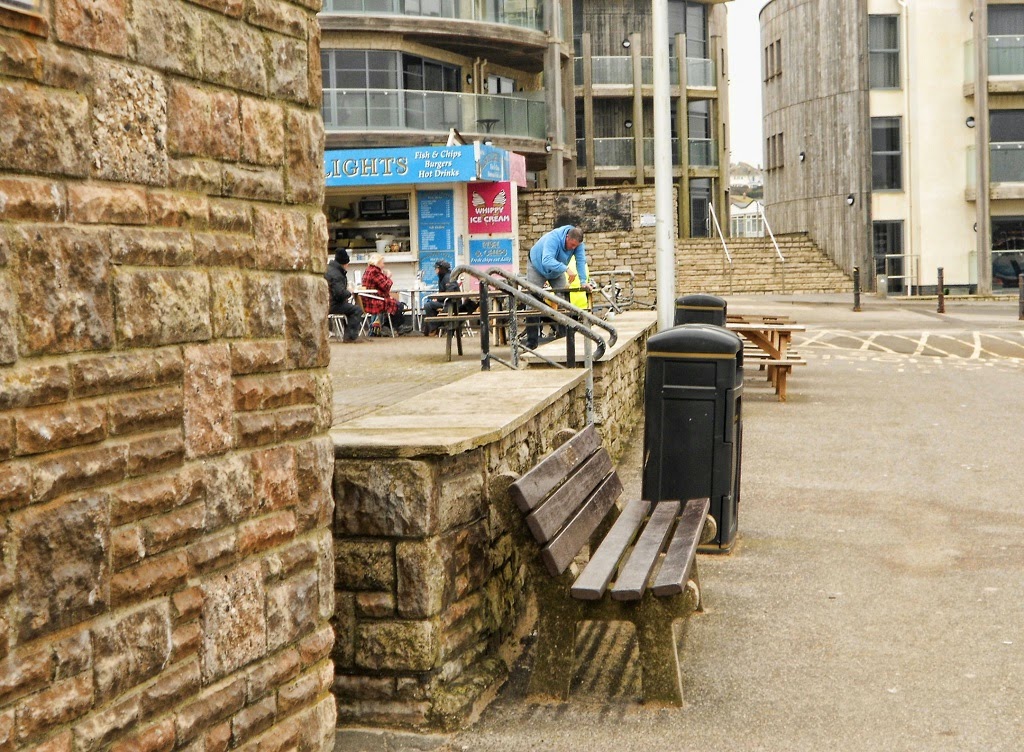 I think I was a bit too far away to take this man painting a table, He may have thought it a bit odd if I had asked to take a picture of him. However the men painting boats must have thought their jobs went on like the next picture. 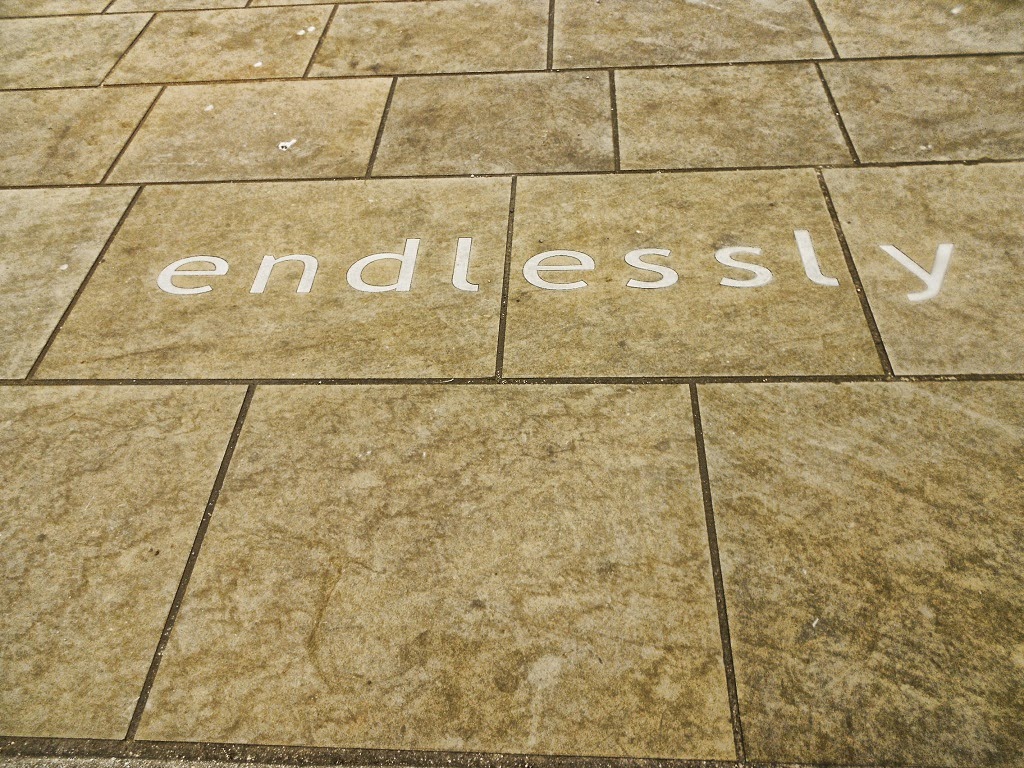 I could not get the quote in of this one but this was one of the words . Bit like how my blog goes on really lol. Of course being here we just had to get one of "The Beach", 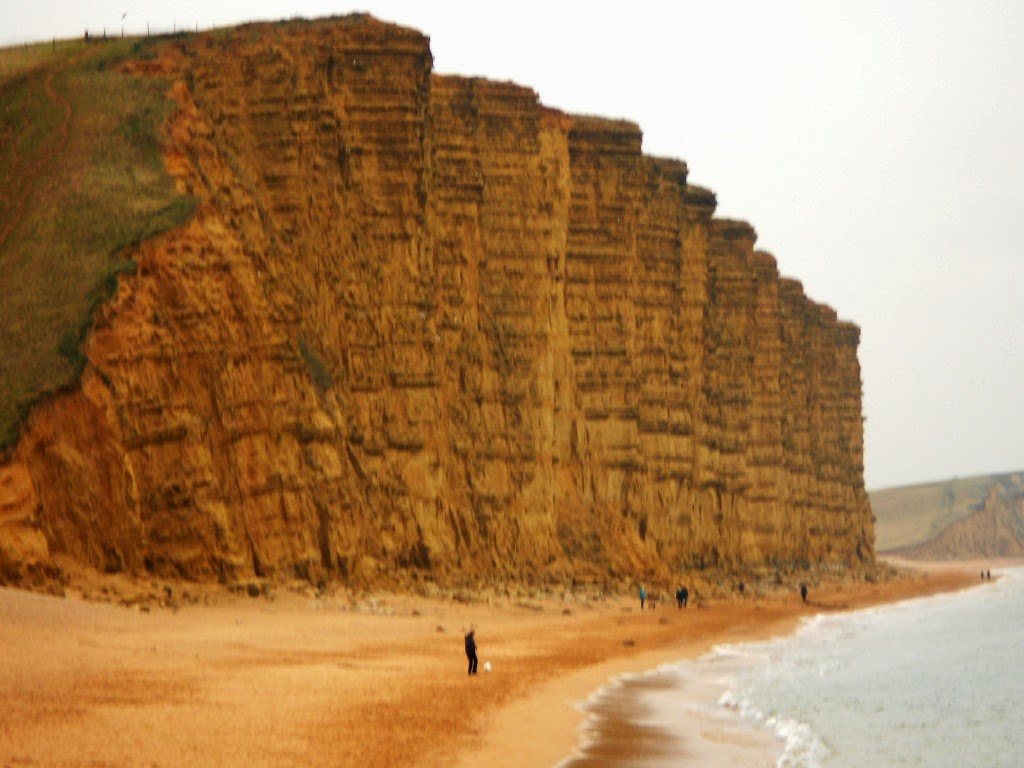 Just love the pattern of the cliff formation. When you see it a bit further on it looks as if it is just a stack of cliffs on their own. 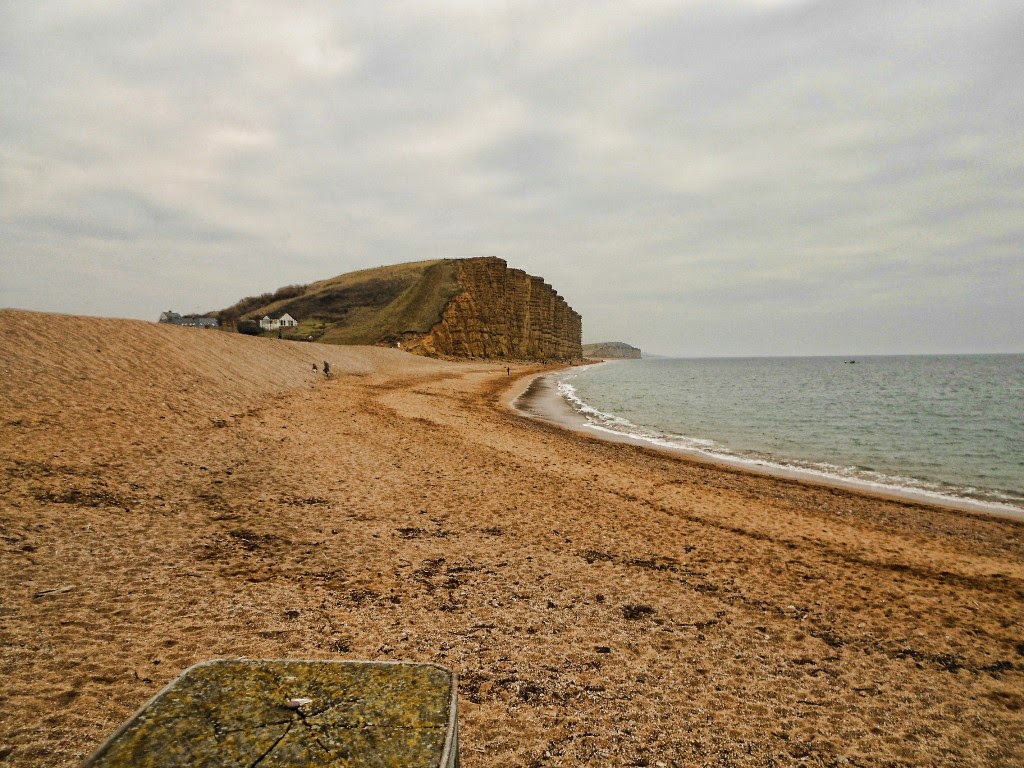 Eventually if you follow the beach past the cliffs you come to Portland which is the end of the Chesil Beach. If you go to the right you come to Lyme Regis. Where I hope to do a Jane Austen tour in April. Of course I am hoping to kill 2 birds with one stone that day ,if we are lucky they may be doing a Mary Anning tour on the same day although I would be quite interested in that one I think Martin would like that better, I am not sure if he would want to do the Jane Austen one.Anyway I digress, A picture of West Bay harbour . 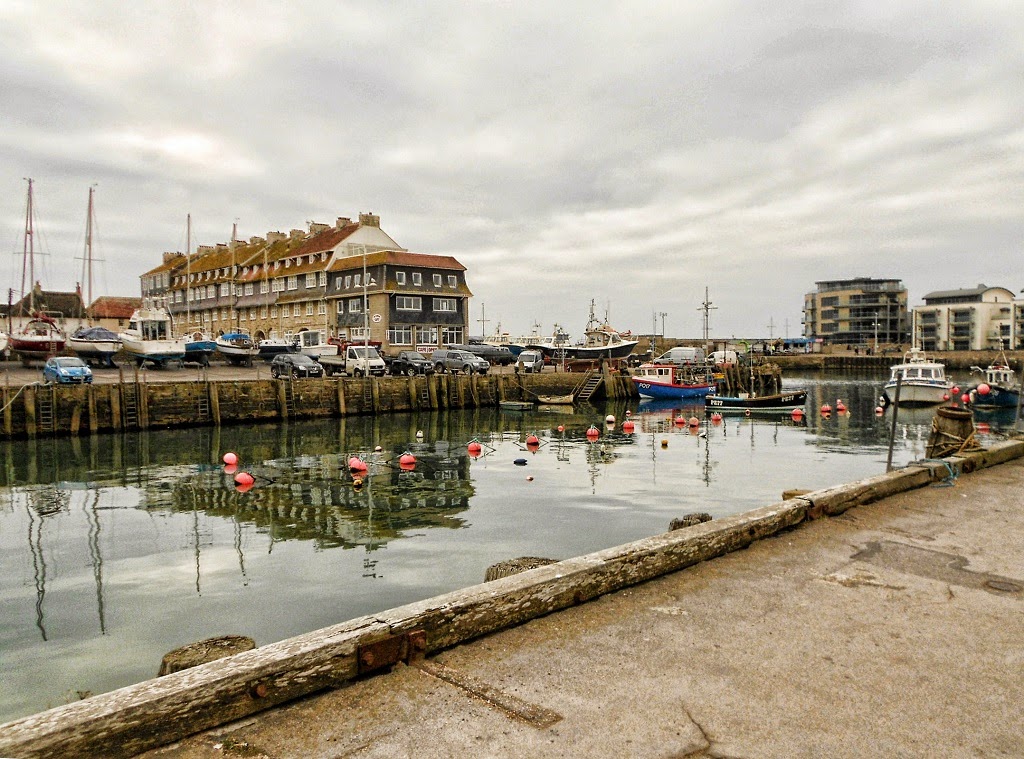 .It was a cold day and the light was not very good. I don't know if any of you remember a programme called Harbour Lights ,this too was filmed here and again it has been taken up by the locals as the Harbour masters office has Harbour lights above it.
So I will leave this bit of a day out with a pic of some boys (oops ,got you all excited there didn't I )mean bouys.These were bright orange not pink ,my camera is a bit off on colours. See a bad workman always blames his tools lol. 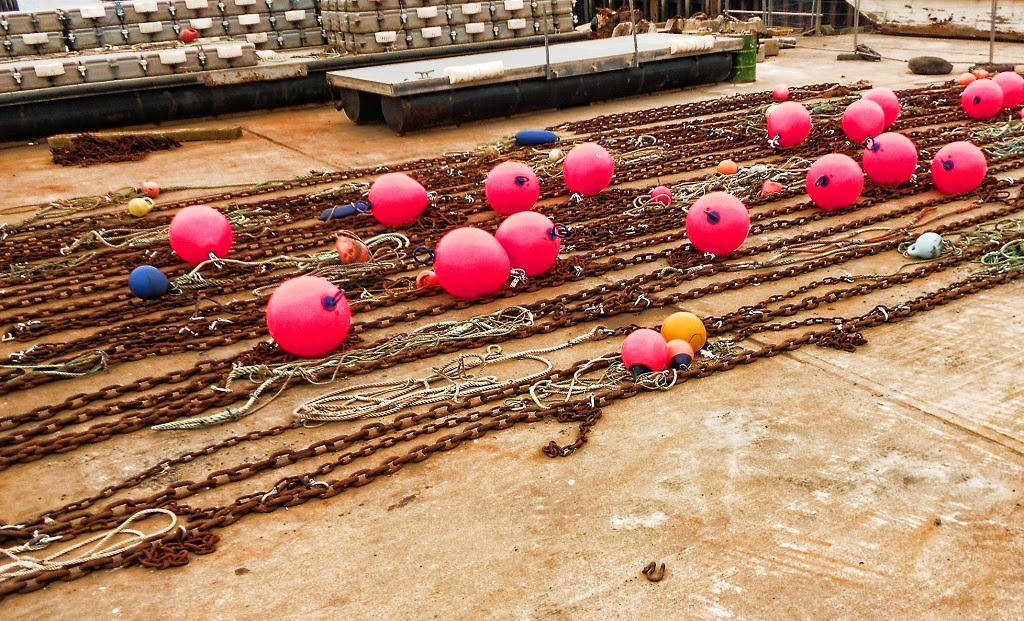 I was trying to be creative but it did not work.So now onto probably things that will interest you more. Last Sunday I had a birthday and the three score years and ten are even nearer now . I am trying not to think about that ,it is just a number. I had a lovely day ,really spoilt and had lots of gifts. I am going to show you some of the things I received but before I go a massive thankyou to everyone who remembered me . An apology to Michelle who sent me a card about 2 weeks before the day and I have not emailed her , so I will show you hers first ,Thanks Michelle for the little bird and threads. 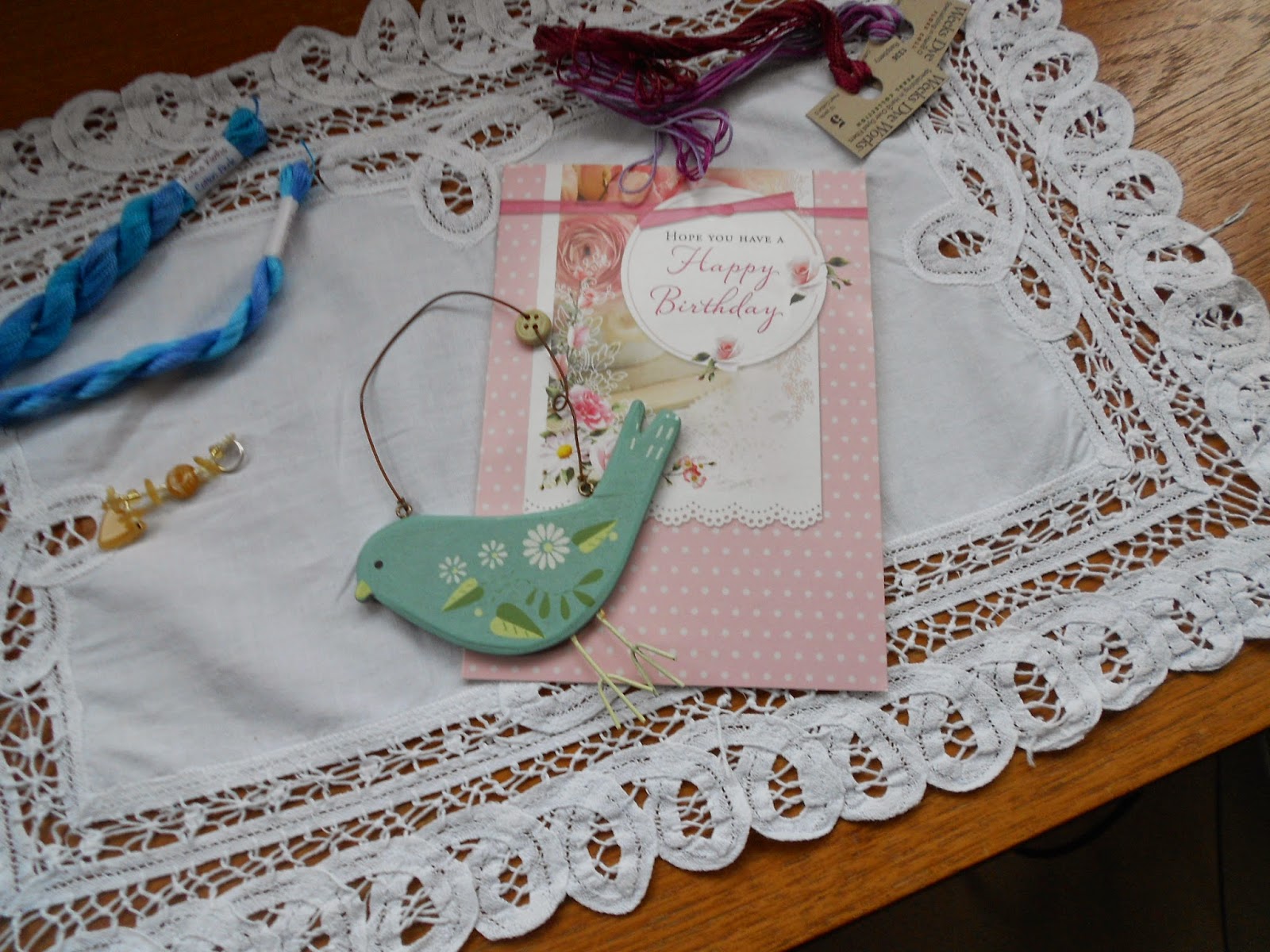 On the left is a little beaded hanging that will fit nicely on my scissors ,that was from Needlecraft Havens Clare.I should have written down who sent which threads as I cannot remember ,isnt that dreadful.  I cannot do these in any order as I loved everything .
From my friend Julie oh did she spoil me. We met through NH and I have to say she is someone whose friendship I would hate to lose.Her gifts to me were these. 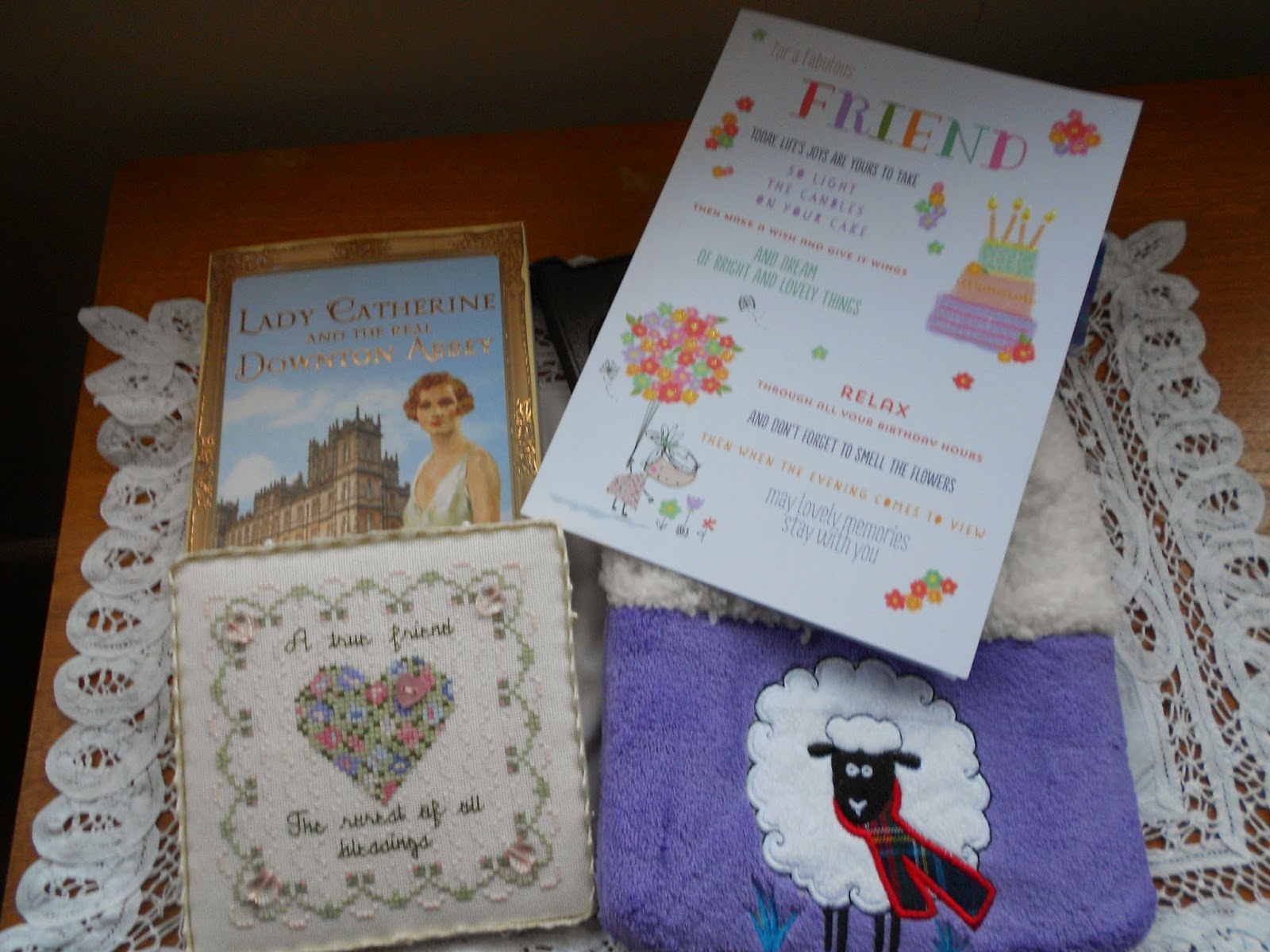 The little JBW design is absolutely exquisite, so pretty and has put me to work too. A friend came to see me on the day and  fell in love  with it, so I thought I would stitch her one for her birthday . I thought it was a JBW design from the style and writing so I searched for it, it must be out of print as I could not find it. Thinking I may have been mistaken ,I wrote to Julie and asked her ,the next day I had it in the post as she said she did not need it anymore. So you see a friendship to treasure.The sheep is a hot water bottle to keep me warm in the parlour. The book is the story of Highcliffe Castle ,Downton Abbey to you and me. Thank You Julie. You  are all dear to me , some I am in touch more than others but a friend I am in touch with every week more than once is Sally, we stitch along together 3 times a week ,we have a virtual helicopter to take us to each others houses on Monday ,and Fridays and on Wednesdays we meet up with the others in the parlour. I have many of Sallys stitcheries dotted about and her bookmark she made me is in my book before I turn out the light at night. So you can imagine how this little beauty pleased me. 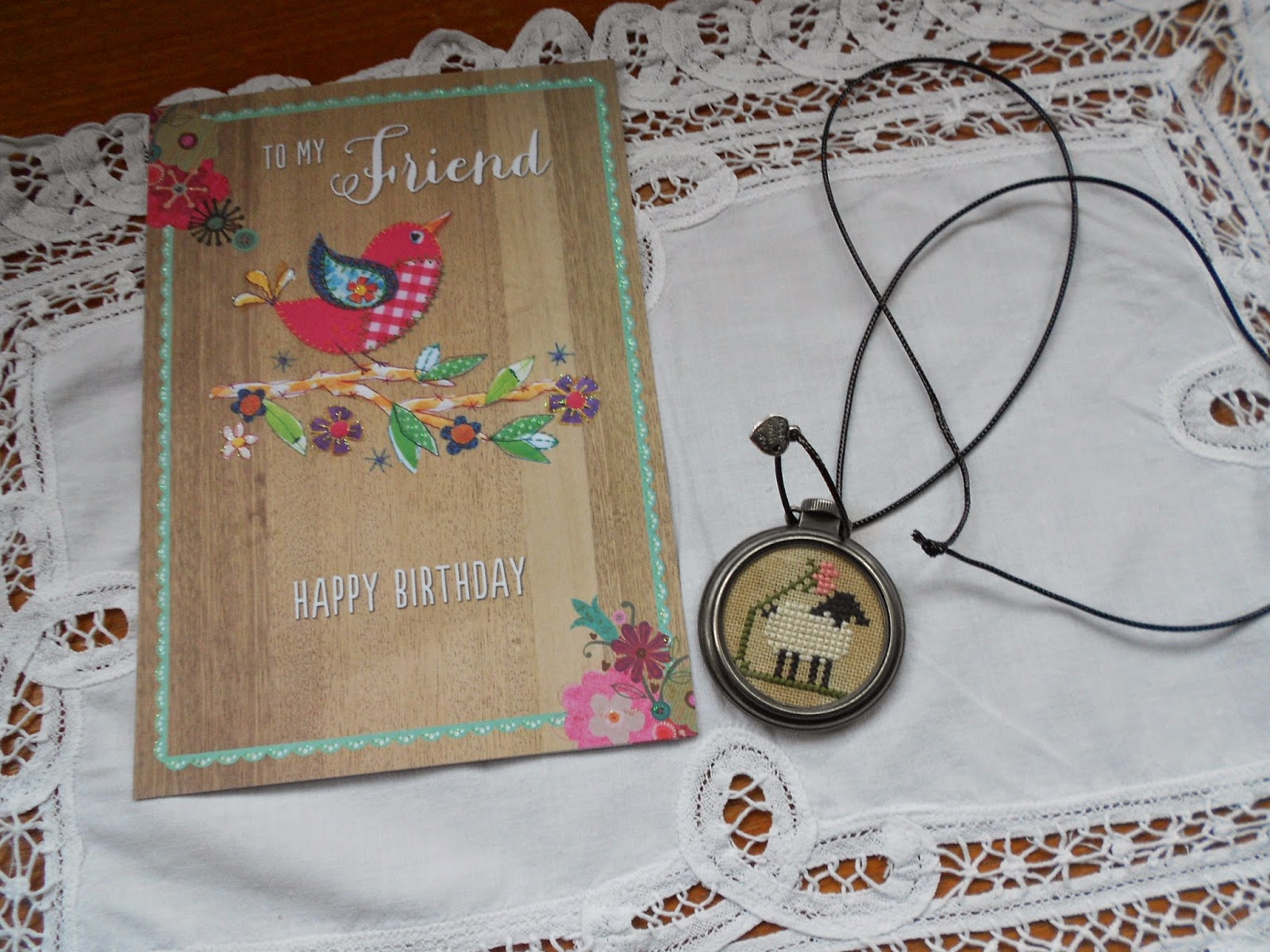 A little sheep mounted into a fob watch frame. Even my grandson Jack was impressed. Loved it Sally thankyou so very much. I am afraid you are going to see a few more sheep yet. I will not show you it all this time as you  will be reaching for the OFF button. I did get this from June , a relatively new friend ,but oh how she spoilt me and I felt quite excited when I saw this. 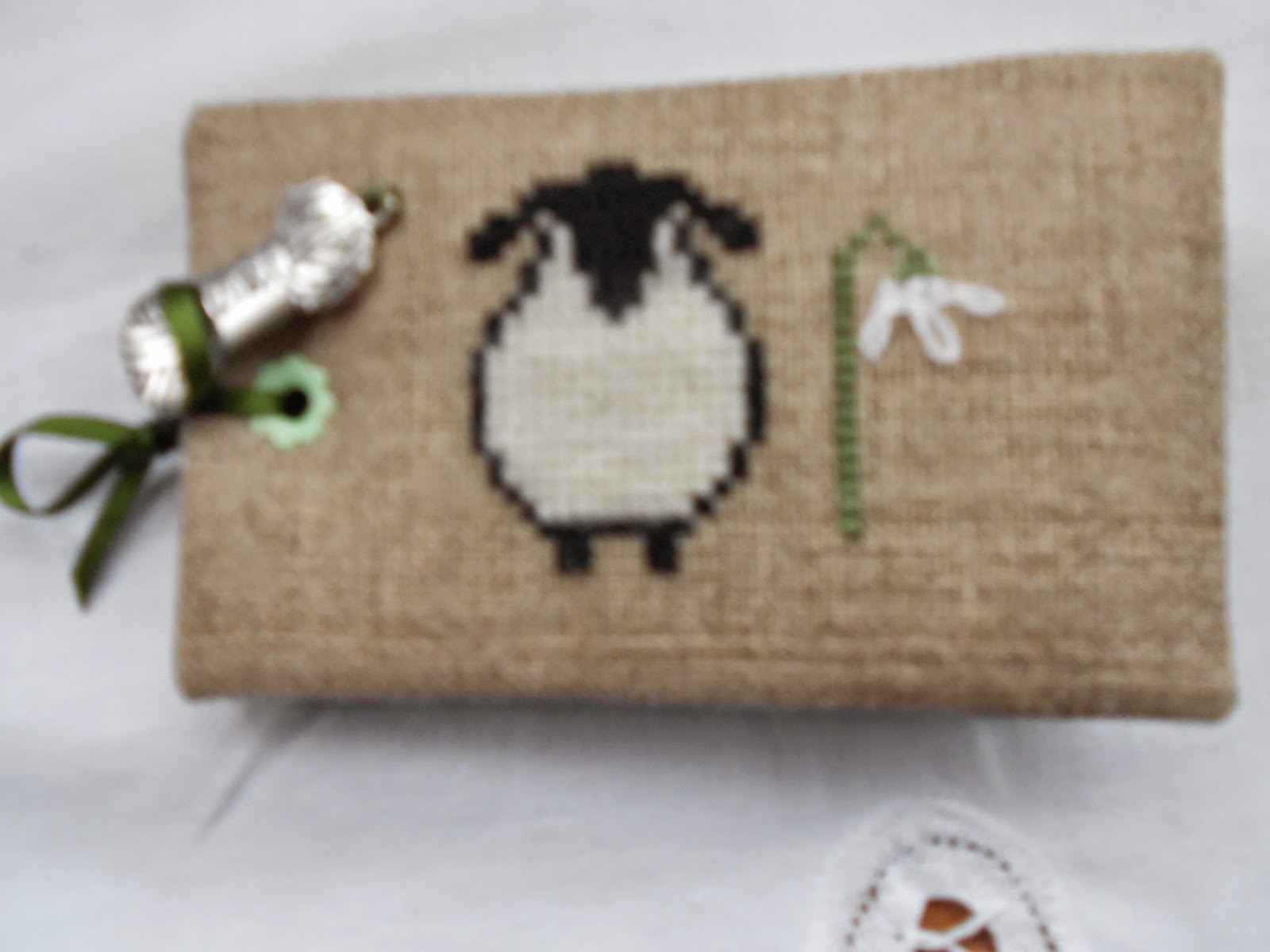 So tweeny with pins and calendar inside,beautifully finished and that was not all.Along with this came fabric ,ribbon , the wool she had embroidered it (yes wool) and a dear little sheep peg.All on a sheep tray, Everything in a lovely spring green and so perfect. 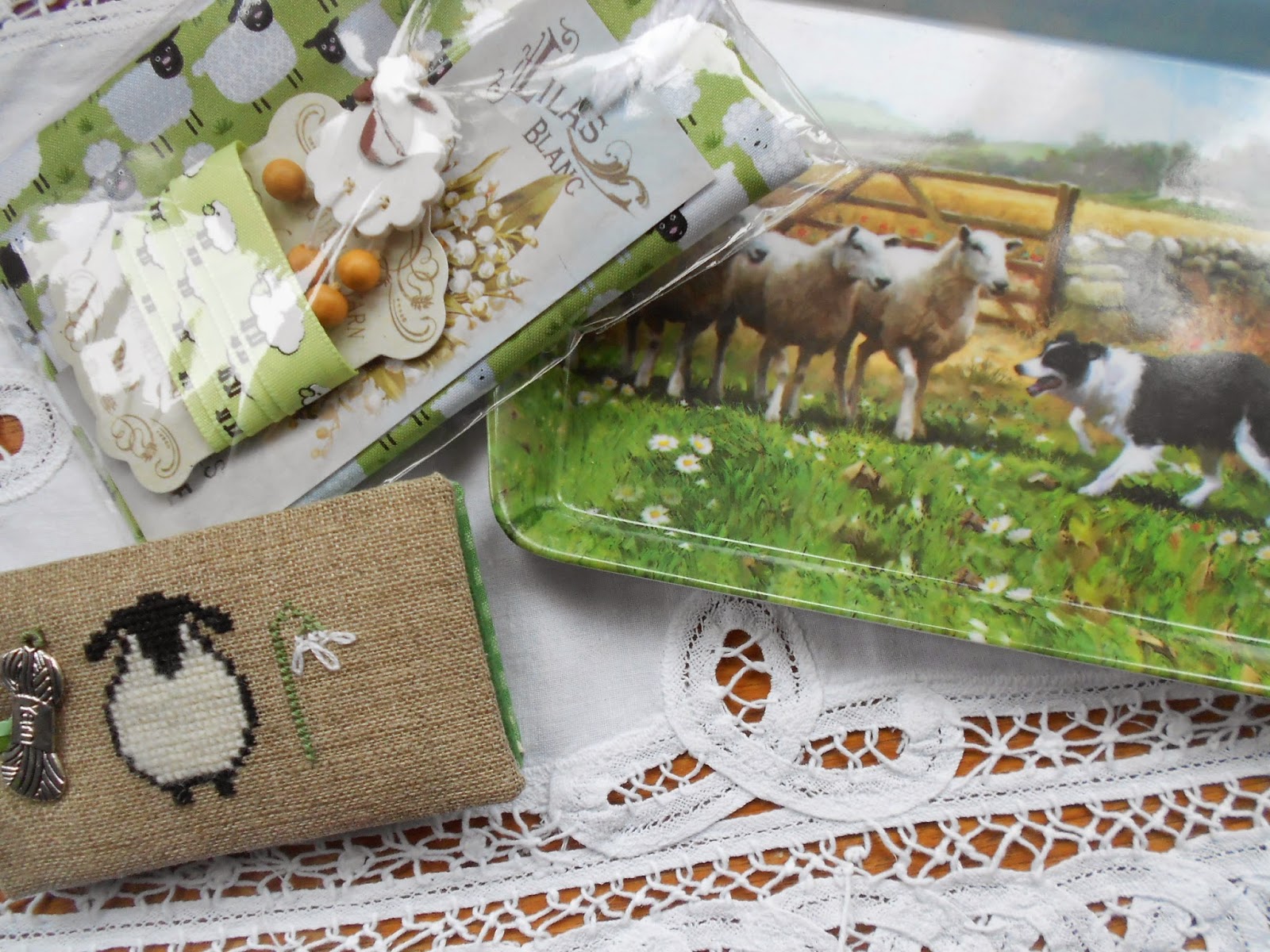 June thankyou , what a nice friend to have . Your colour sense is amazing.
Now to Tina, who you remember I do a Hallowe'en exchange with. I puzzled over this one as it had someones name on I did not recognise ,it was sent from the states with a signed for label . As I was not in when the postie tried to deliver it ,I had to collect it from the P,O. I am afraid I cheated with this one as I was so curious, I opened it on the day before , When I saw my  name on the card I still had not got a clue, the writing was unrecognisable to me. I do know usually from postmarks ,names on back etc.So I opened the card and it say Have the happiest of Birthdays from your friend Tina. I dont know anyone in the states called Tina I thought. The only Tina I know lives in the midlands.I did not think she was on hols or anything so after I had opened it I thought it had to be her, so I mailed a thankyou and phew she replied to say Yes it was her. She had ordered one for herself and thought I would like one too. How sweet is that. It is so pretty a velveteen strawberry . 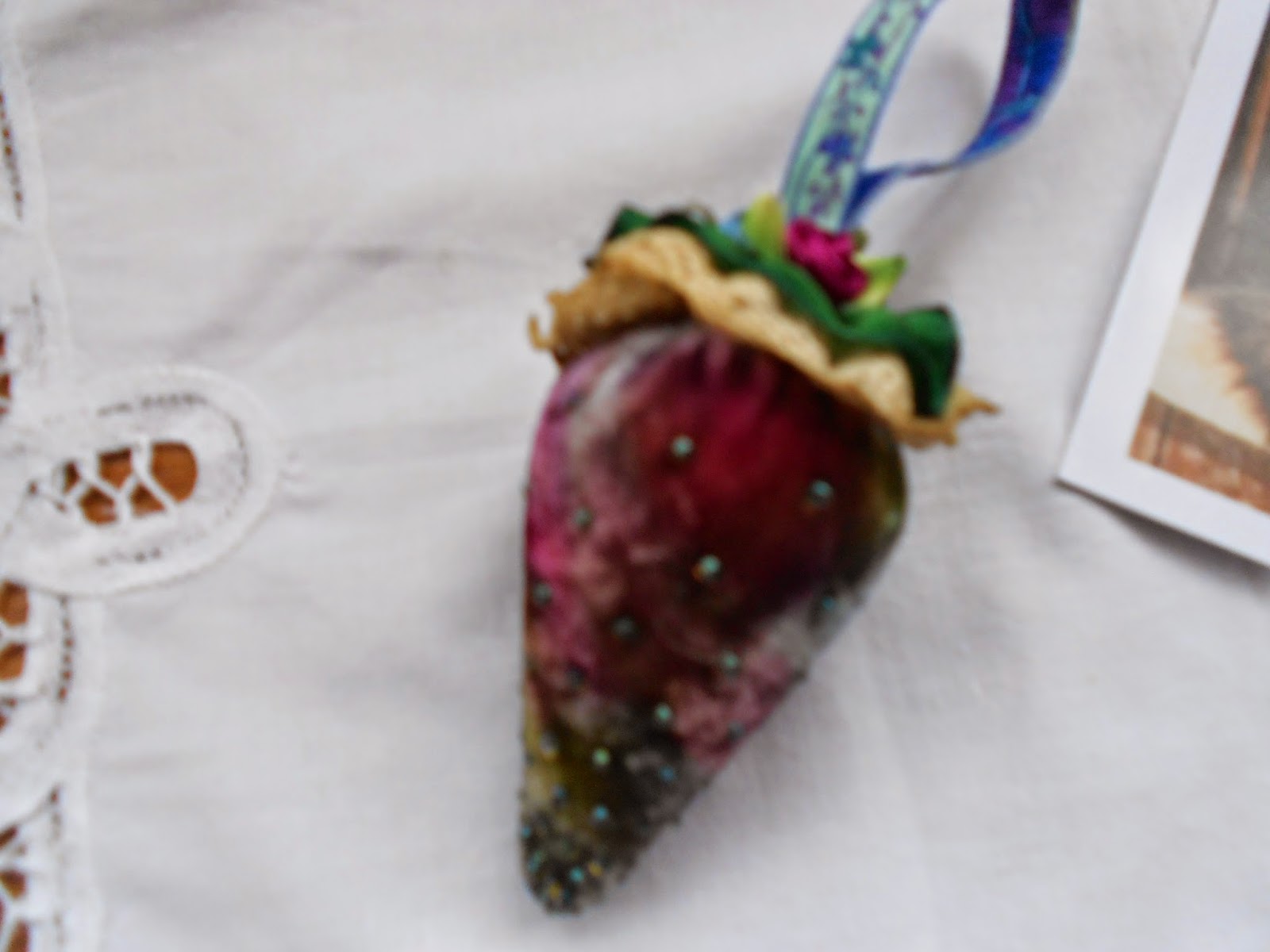 Sorry pic is a bit blurry. I think I have had a bit of a hiccup and pressed publish before I had finished. Having trouble with Blogger and pics and pressed the button I should not have done.,
I am going to have to leave you as the dog and Martin have just come back dripping ,I will have to dry dog as I cannot stand the smell of wet dog. Shall  catch up in the week with some more birthday and stitching progress to show you. Take great care of yourselves ,Be back soon.
Much love Barb. Please excuse the length of this and any grammatical mistakes , brain on go slow.
at February 22, 2015

What wonderful gifts you had for your birthday .
Love what every one made for you .
Thanks for the lovely photos looks a great place to visit hugs.

Lovely gifts Barb. I really liked the pictures of your trip.

I love seeing places I have never been to.
What lovely, special gifts your were given Barb.

I love the pics you take of the places you visit so thanks for sharing them. I'm also a fool for sheep so keep them coming! :0)

Glad you had a nice birthday - happy belated to you! Enjoyed the entire post - never too long.

Great photos Barb. I imagine being featured on TV will bring even more tourists this year. Doc Martin certainly has that effect around here.
I hope you had a lovely birthday, you certainly got some gorgeous gifts

Lovely pics of West Bay, brought back memories of my visit there, I didn't climb the hill either!

Superb gifts from your friends, very richly deserved too, you always spoil other ladies when their birthdays come along.

What a beautiful selection of gifts you received for your birthday.
Great photos of West Bay.

Such great gifts, Barb!! Happy Belated Birthday to you :)

I also enjoyed your photos of West Bay as my husband and I just finished watching series one of Broadchurch... How nice to see the area in person!

Happy belated Birthday!
Love seeing photos of your trip to West Bay - you are so lucky to be able to go to the locations of these shows... I really enjoyed the first series of Broadchurch and I now have series 2 to watch!
Hugs xx

Very happy birthday greetings for last Sunday dear birthday twin :-) What lovely gifts you received. The little sheep mounted in the fob watch frame is so sweet and I love the strawberry. I have a small collection of strawberries, some fabric and some velvety. The colour of this one is beautiful.
What an interesting tour around West Bay. I can't remember going there but we may well have. We often went to Chesil Beach though and to Lyme. I was really interested to read about the JA tour in April. Could you tell me a little bit about that. I would love to do something like that. xx

What lovely gifts you received for your birthday Barb. So glad you loved your little fob. I see me doing more in the future!

Lovely photos from your trip. It looks so beautiful. Hugs xx