Virtuous sheep and a Rosie cushion

Hiya everyone,
I have been busy and feel like the sheep very virtuous.Hands to work and all that. Well by the title you will have guessed I have finishes to show you. An anniversary and an outing also and purchases too. So where do I start?
As it is a sunny day lets start with yesterday the 18th ,for Martin and I a special day our 47th wedding anniversary. We had phone calls from family in the morning and then set off with Ollie for a wander round Abbotsbury sub tropical gardens. 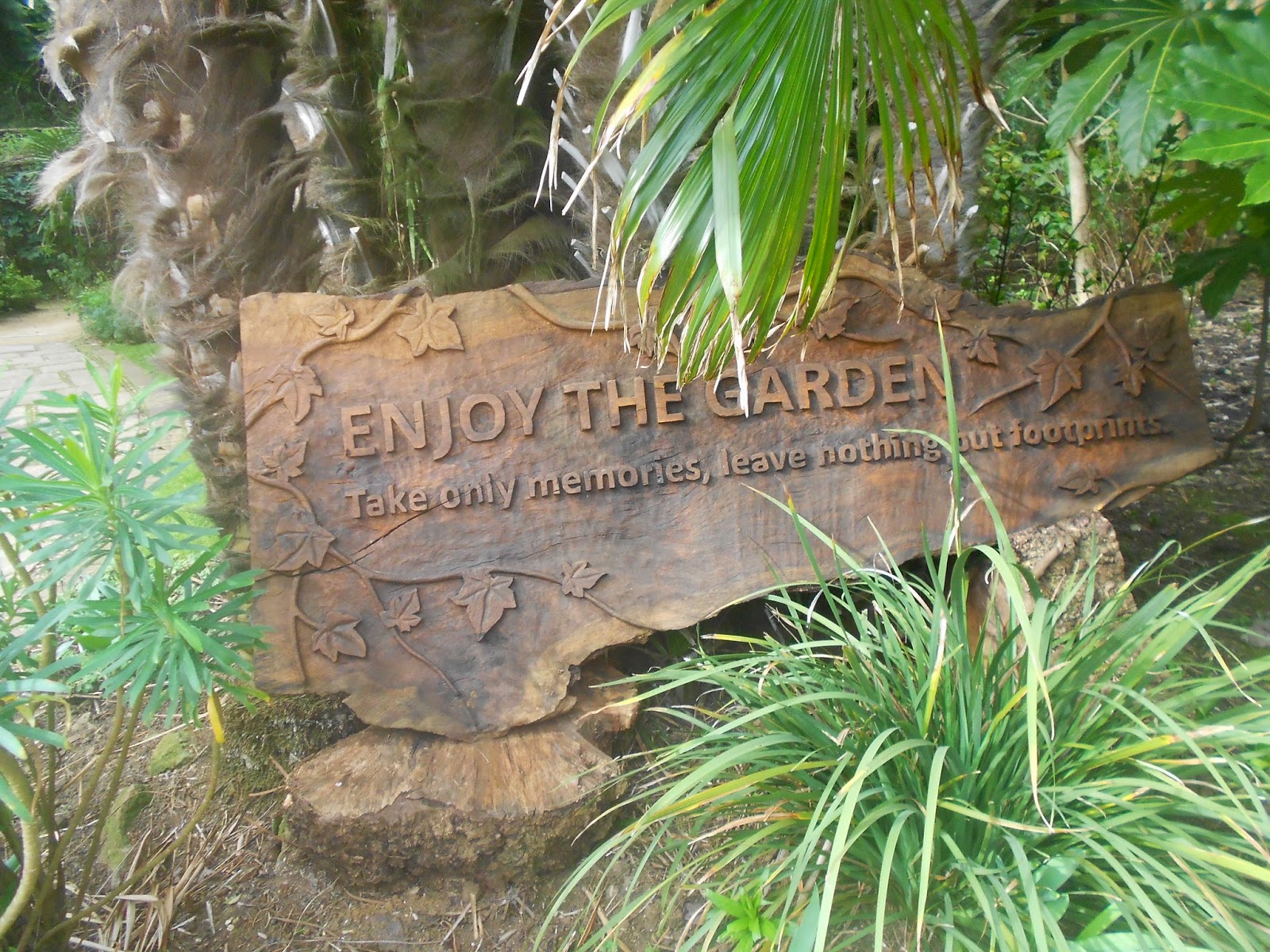 I know I have taken you here before but not at this time of year. As you enter you see the formal bed. 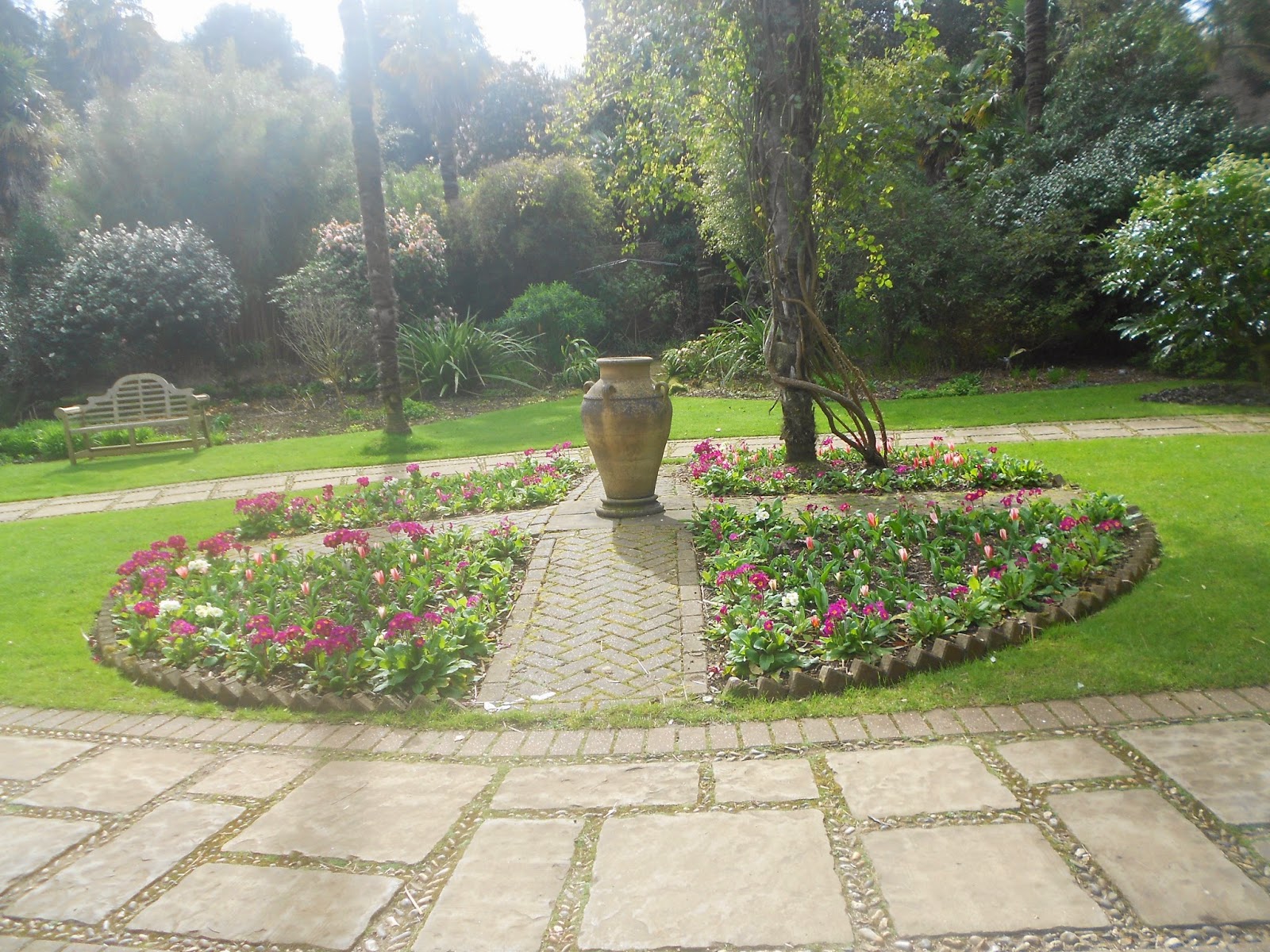 More or less the only "formal"bit in these gardens. The weather did drizzle on us a little but it soon cleared. We wandered up and down and round and round, Ollie had to stay on his lead ,which is only fair. He met a little border terrier who was so cute named Sorrel and was only 7 months old. She so desperately wanted him to play,but he is a staid old man now and does not "do"playing. 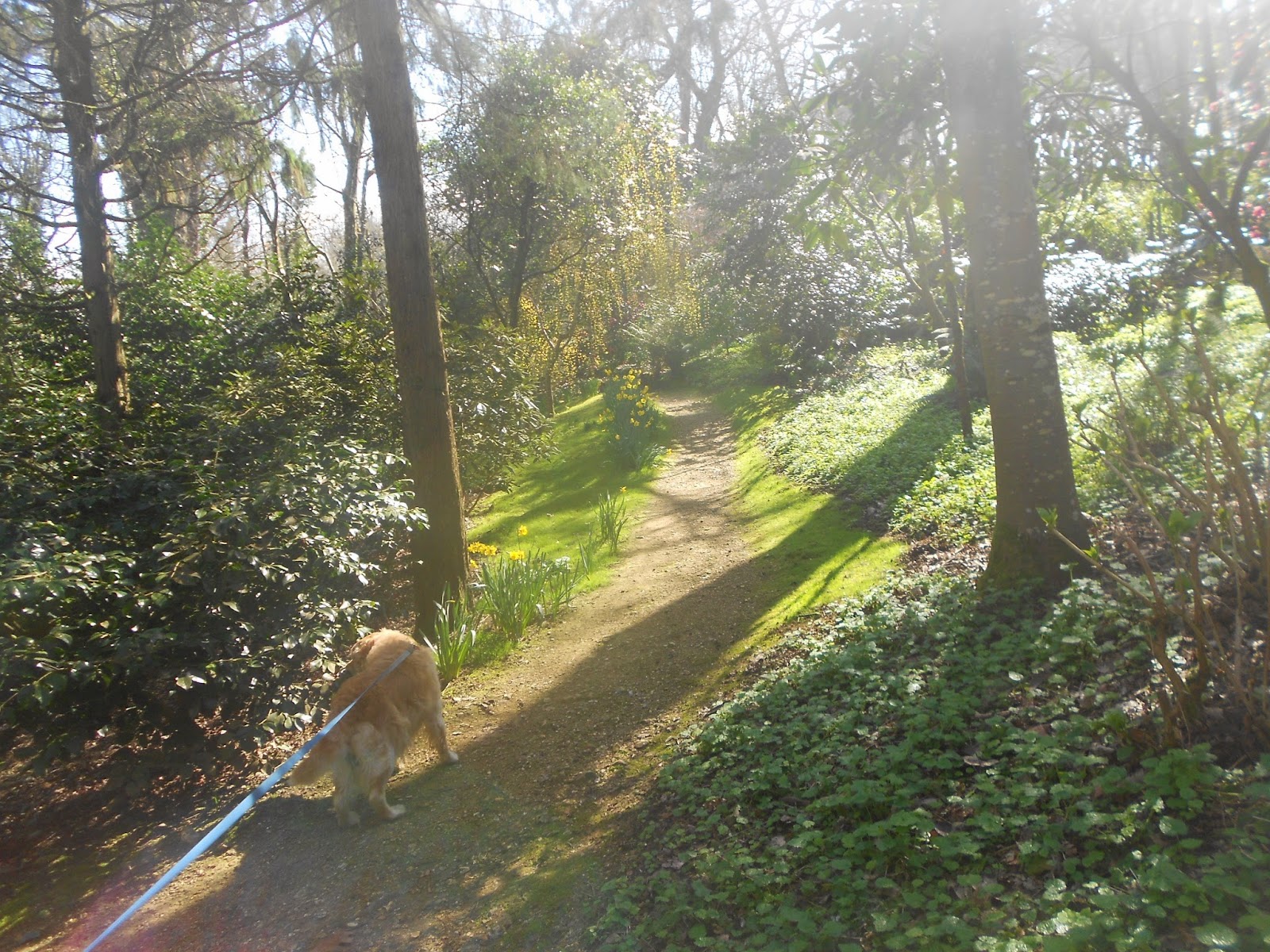 No hanging about for a dog in a hurry. The sunlight coming through the trees was lovely. There were flowers in bloom though and camellias were just finishing. 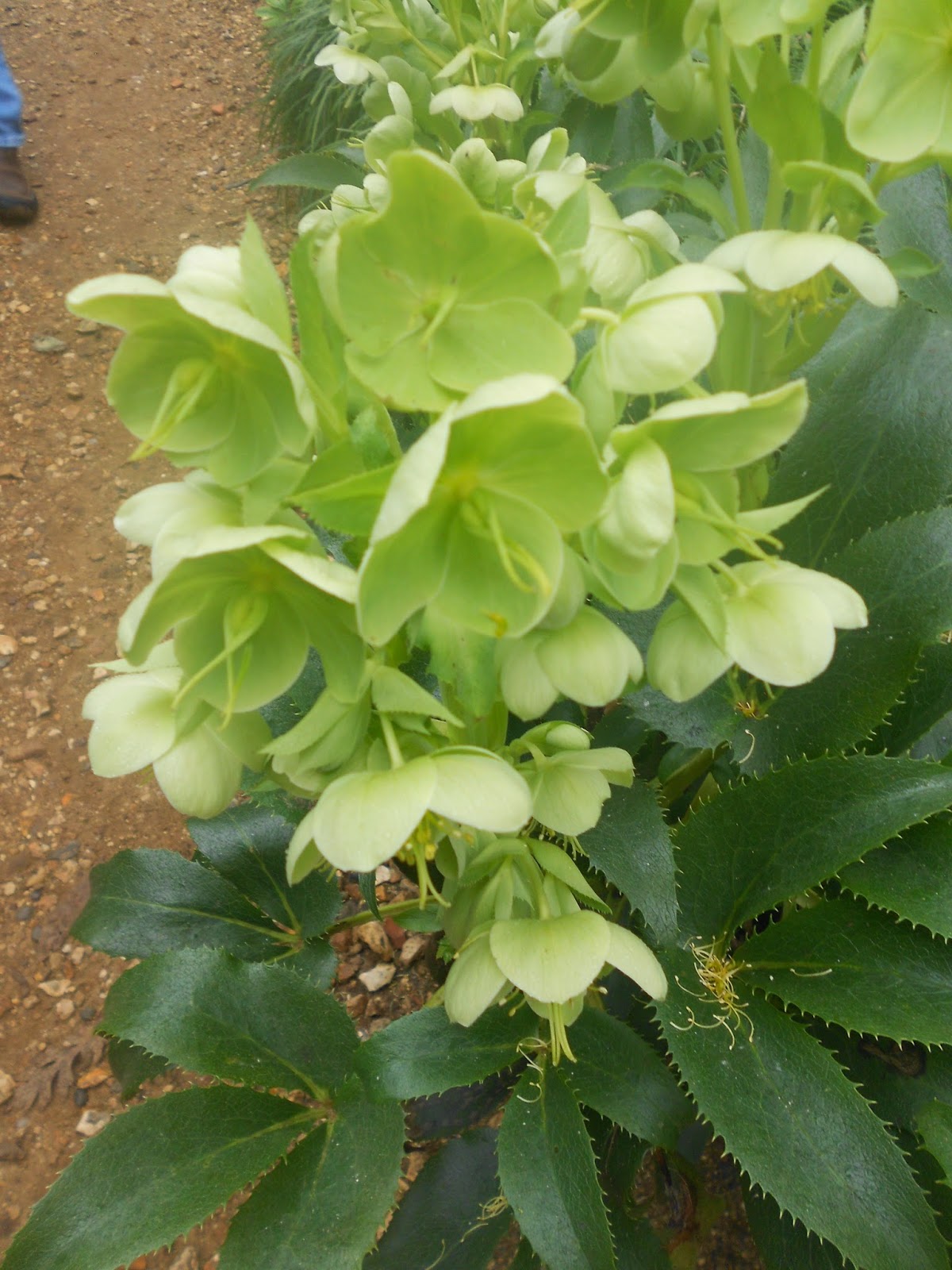 Hellebores in all shades , dark almost red pink , pale pink , maroon, So much to see.
This is called the Magnolia walk and lots still to come into flower. But the daffodils, I was going to sit amongst them for a photo shot but thought they looked better on their own!! 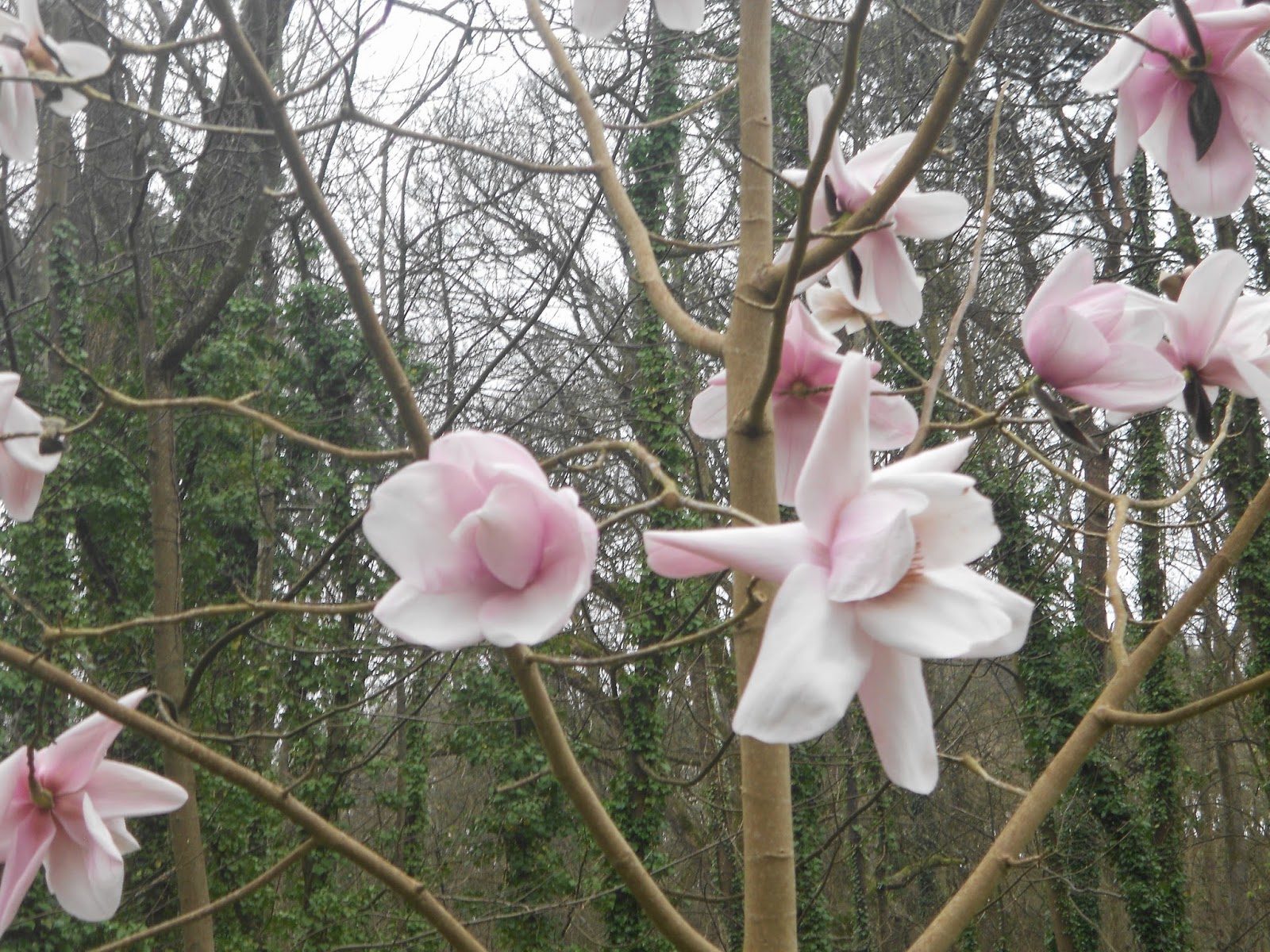 Underneath them all the way to the top, was this. 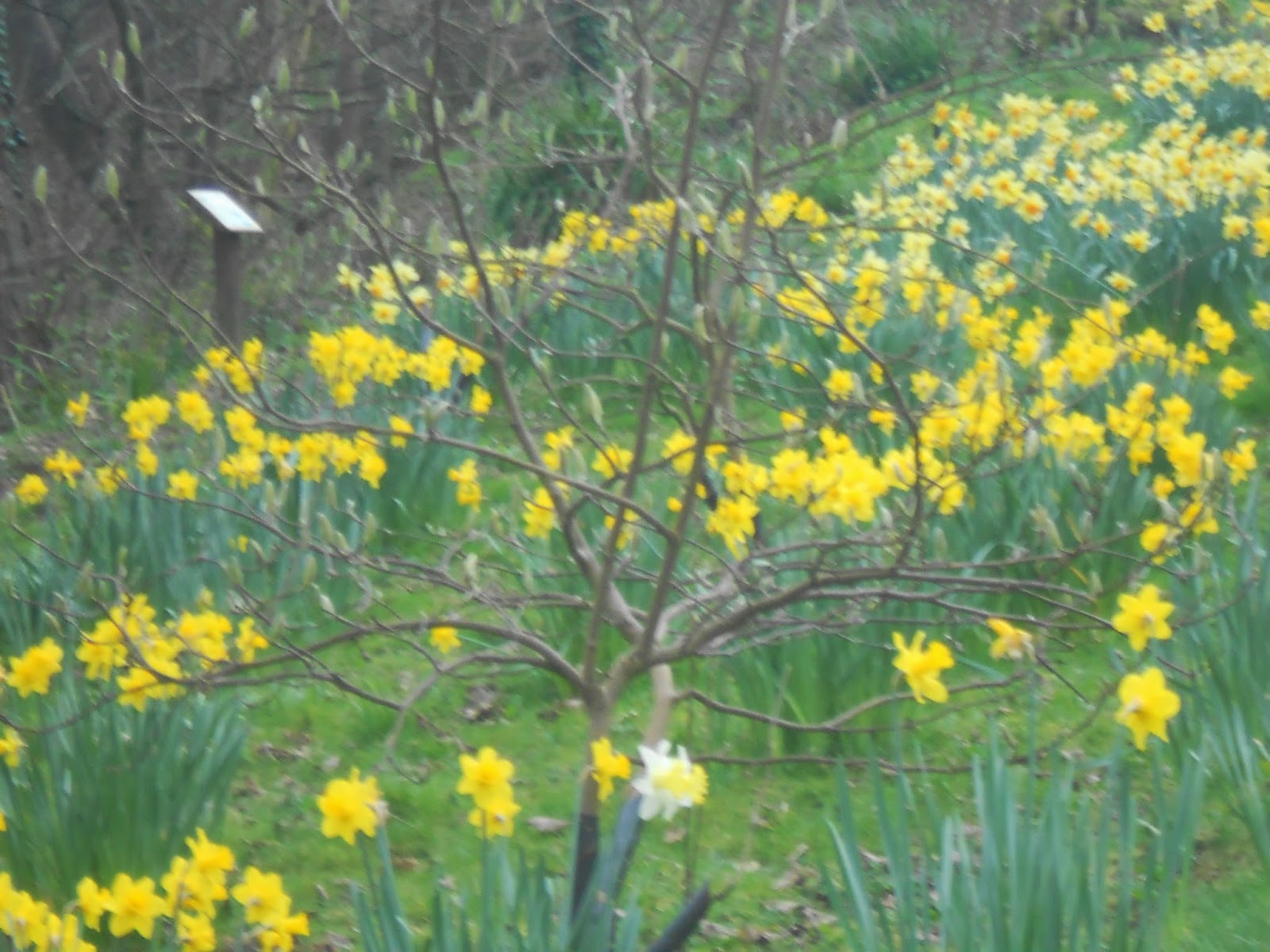 A host of golden daffodils. At the top of the walk , the view was somewhat hazy but still seeable. Is that a word?It is now. 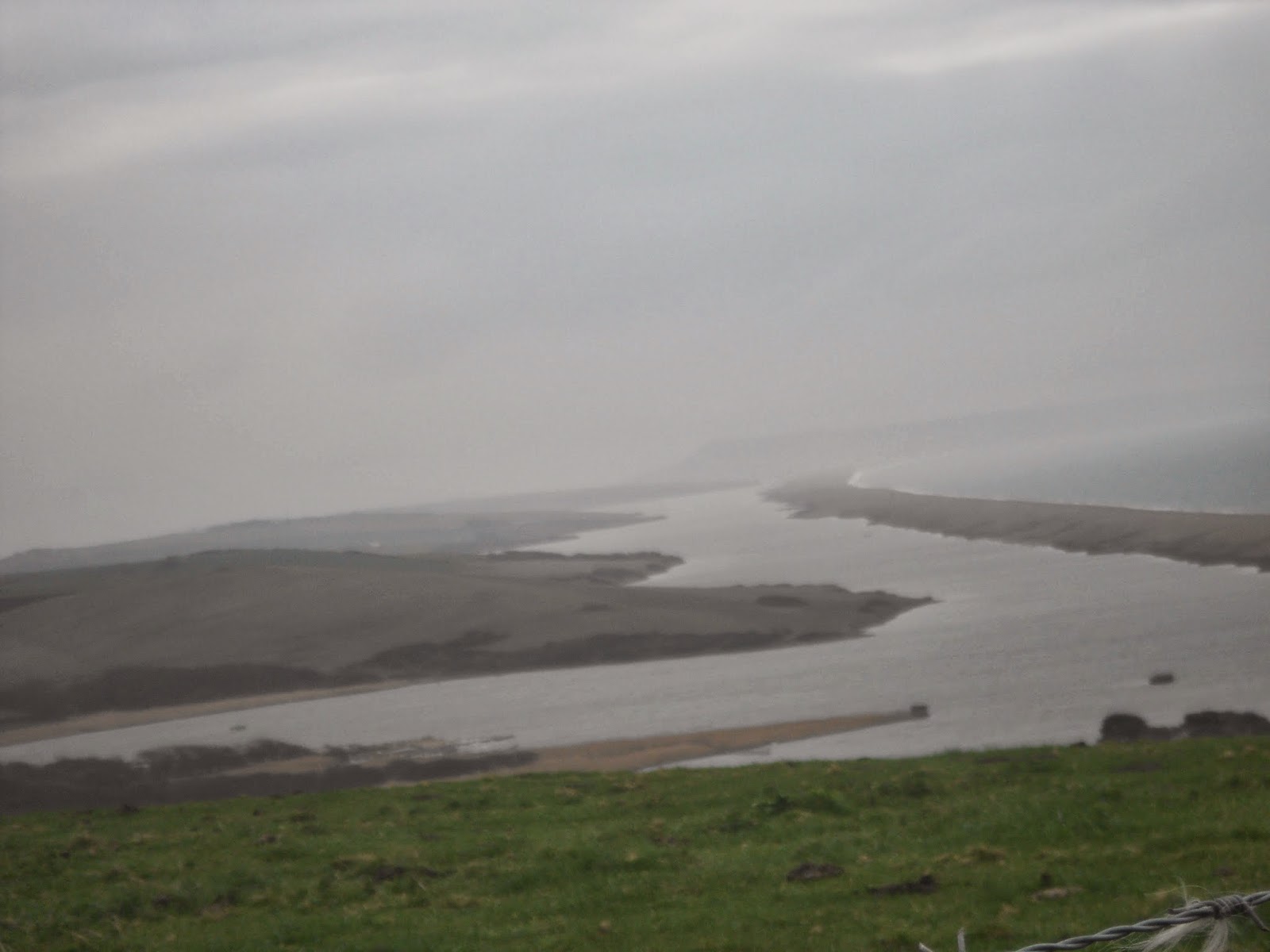 The fleet looking toward Portland which has vanished in the mist, it does not run downhill either,blame the person who took it. Looking the other way toward Bridport and Lyme Regis. 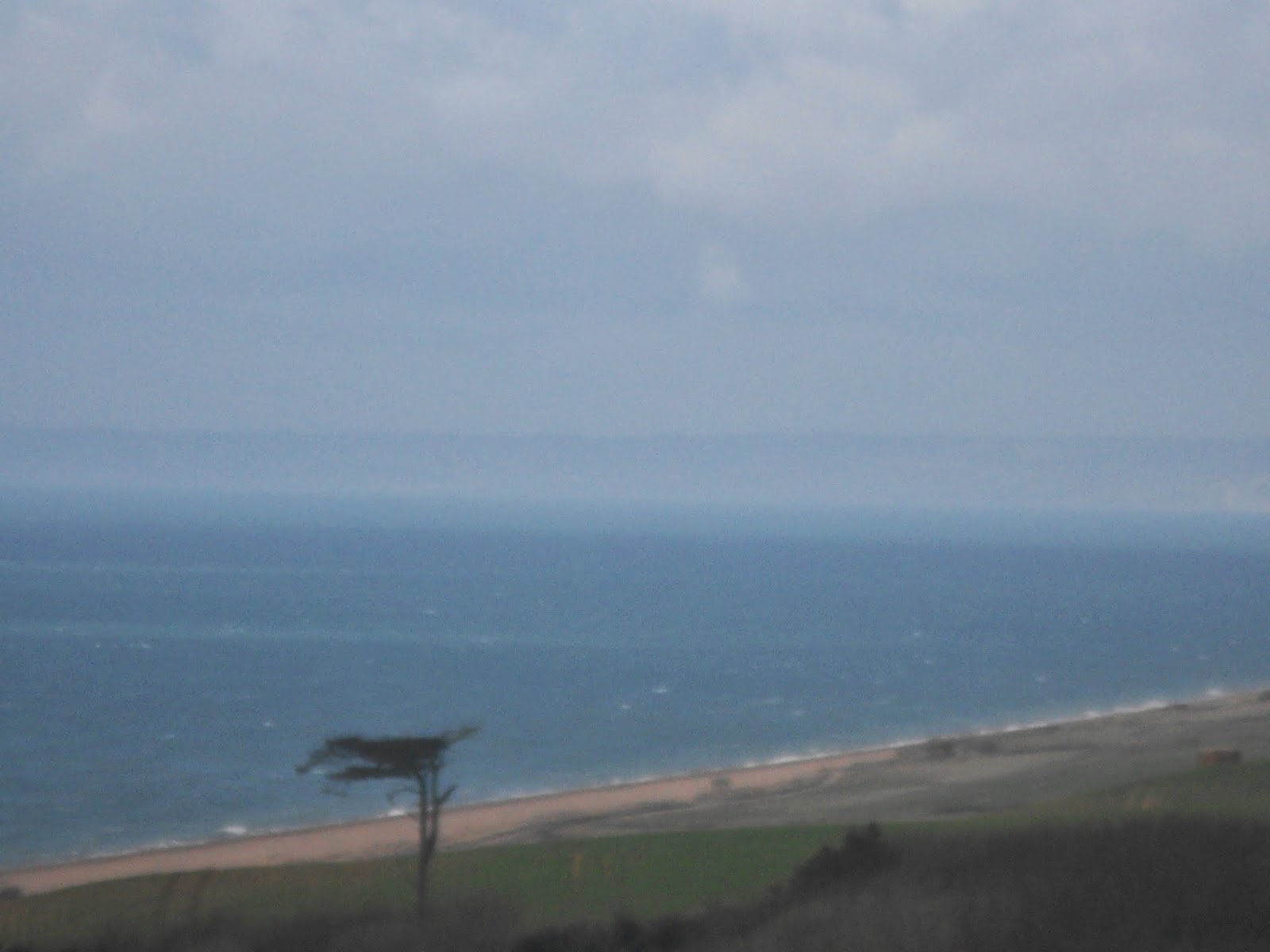 Not a great shot. I do like this wall that curved around the top of the hill we walked up. 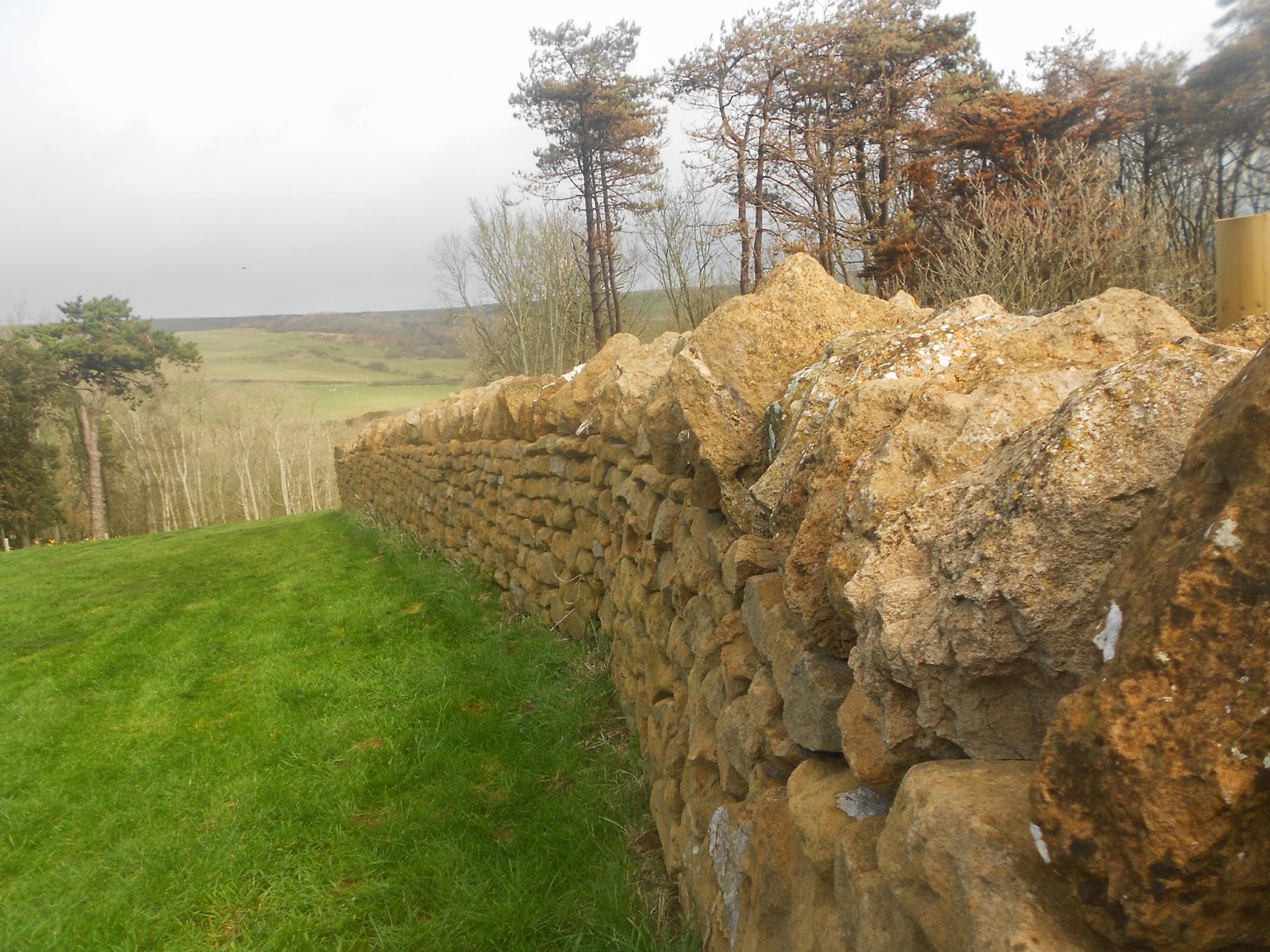 On the way down Ollie was no longer pulling on his lead ,in fact he decided to sit amongst the daffodils. 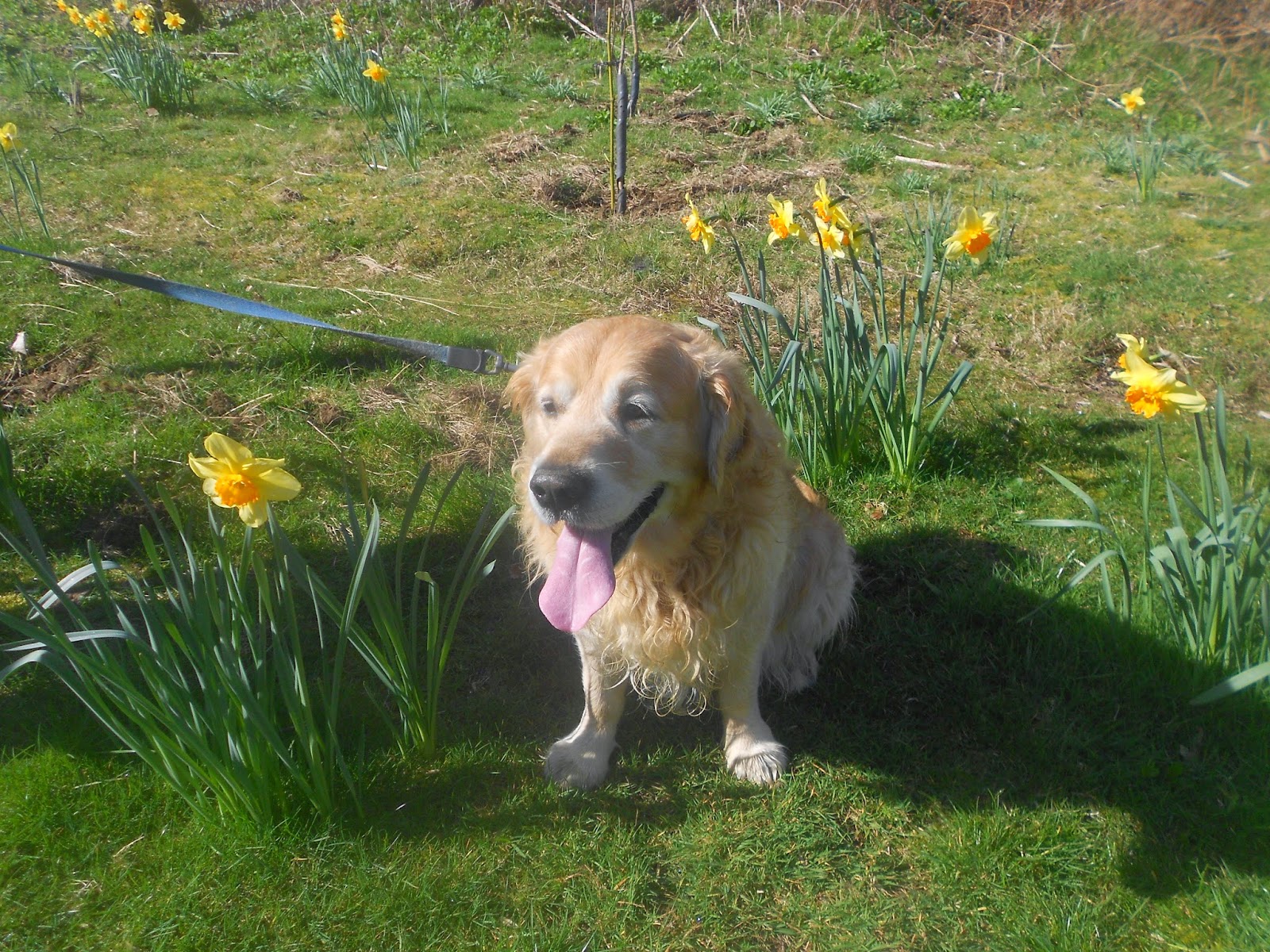 He chose a patch were there were only a few . Walking on we came upon this fallen tree, the gales we had recently must have caused it to fall. 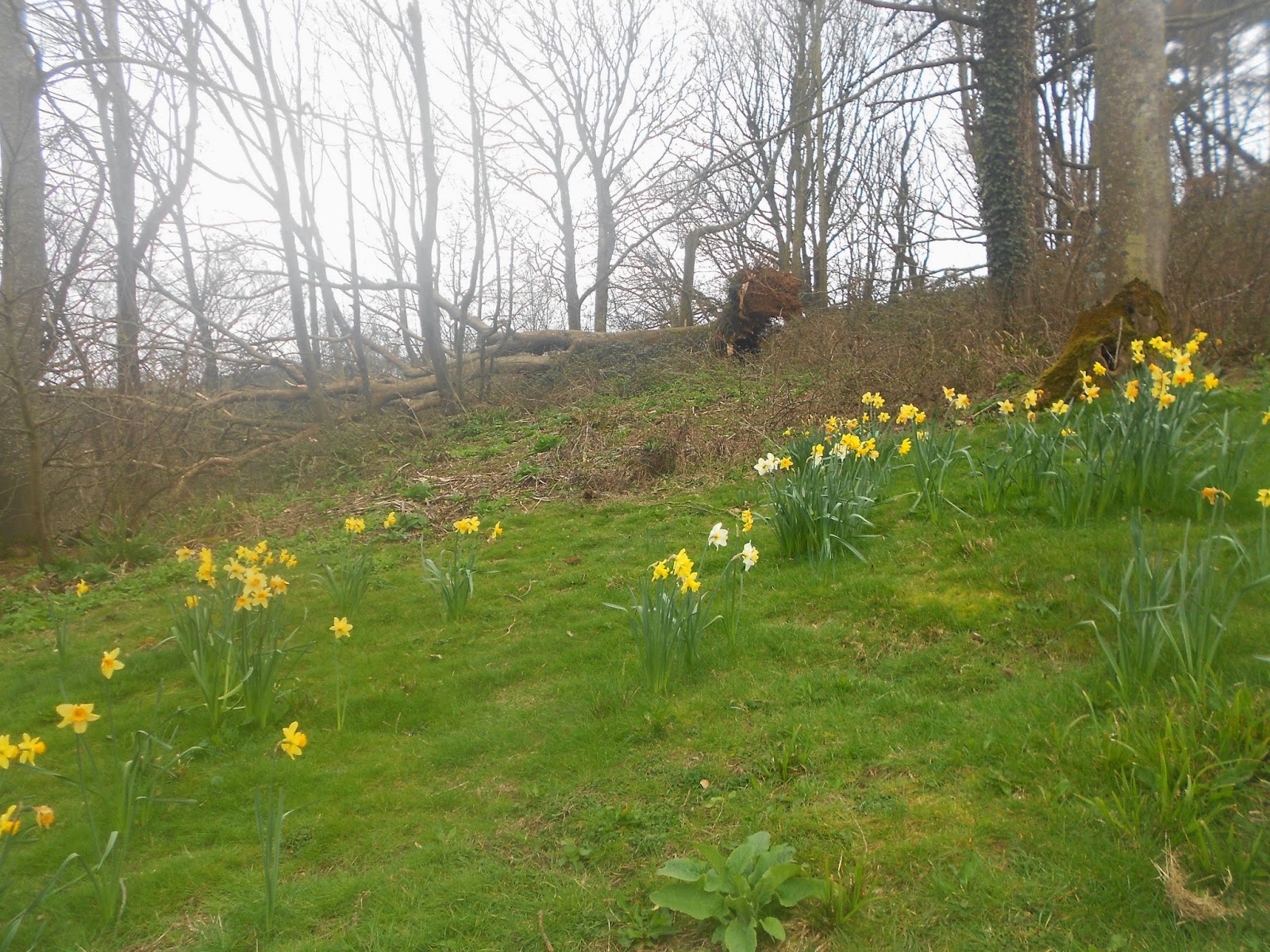 Wonder if they will do what they have done to this one. 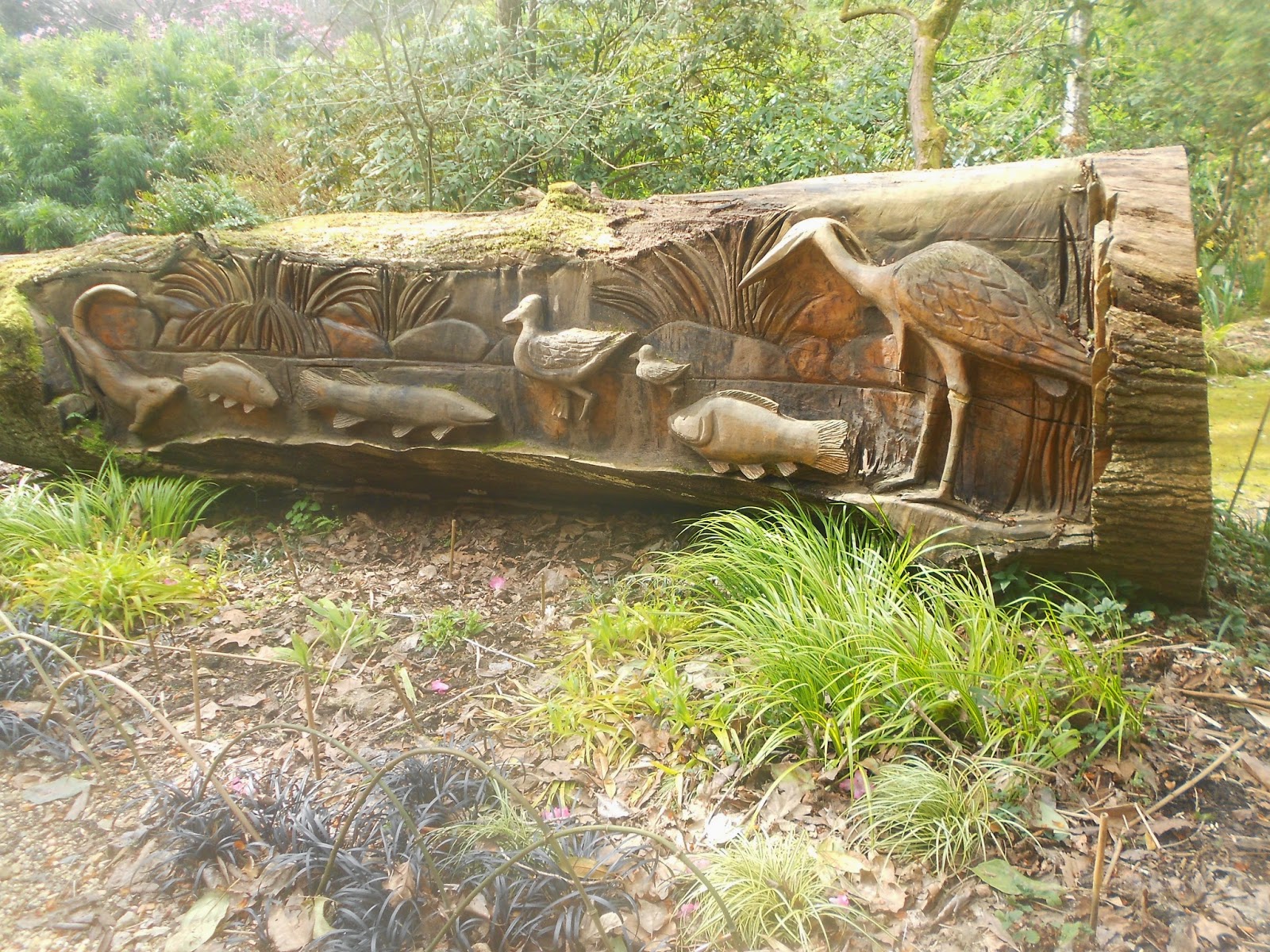 Front and back view. 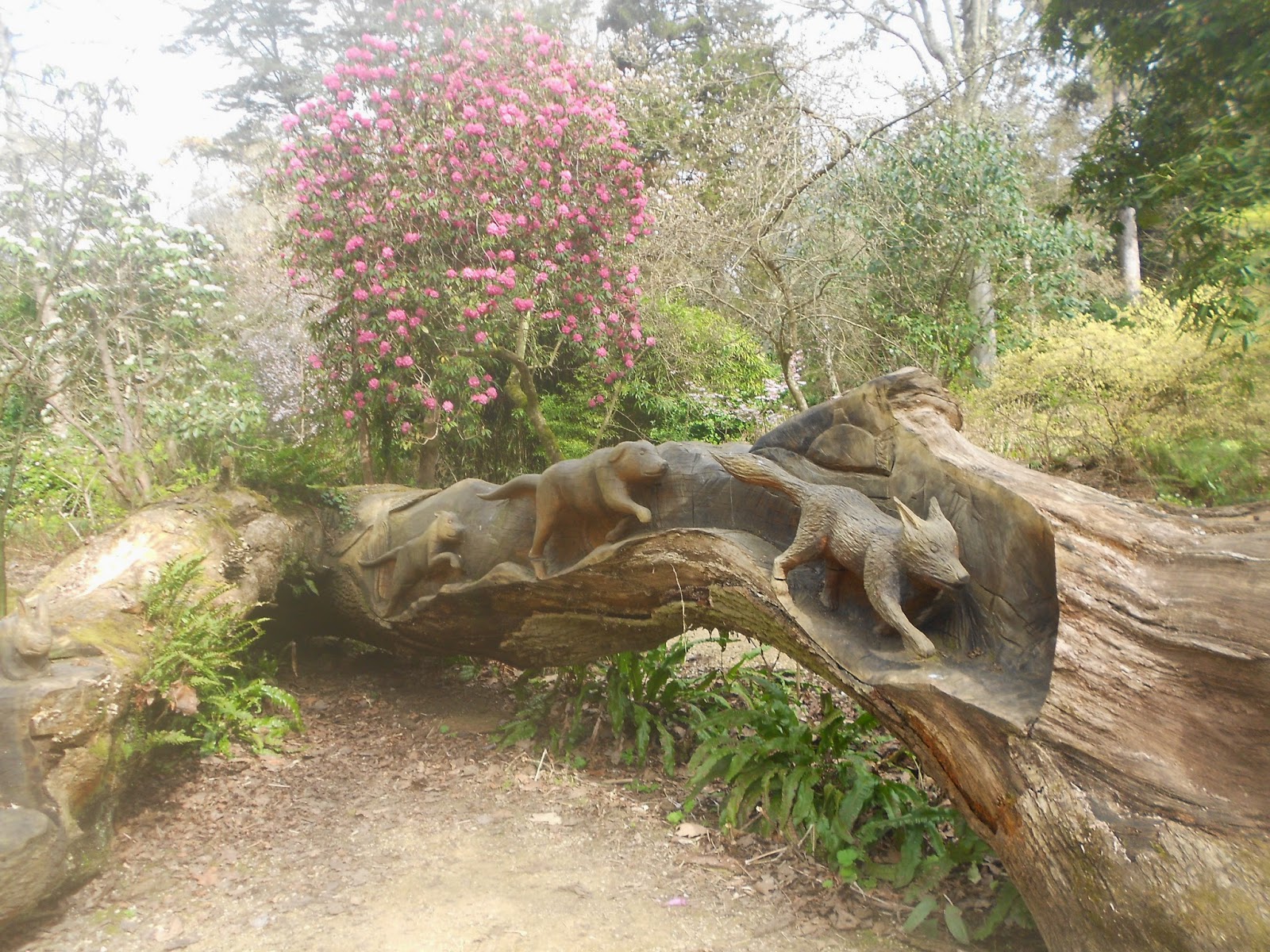 Then just around the corner ,and there are a lot of corners, we came on these having a dip. 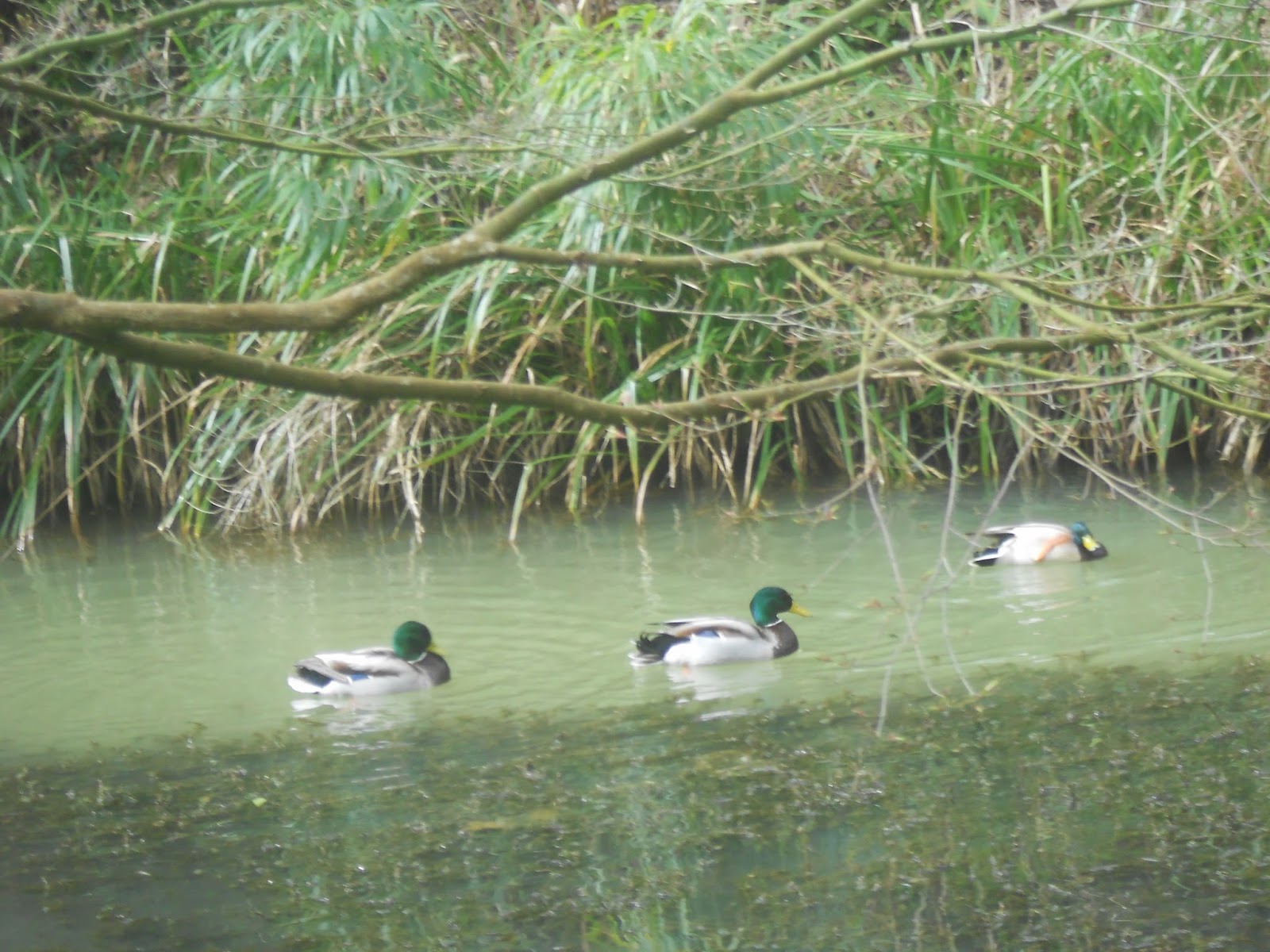 Speaking of wildlife ,something we did not expect to see but we certainly heard them. 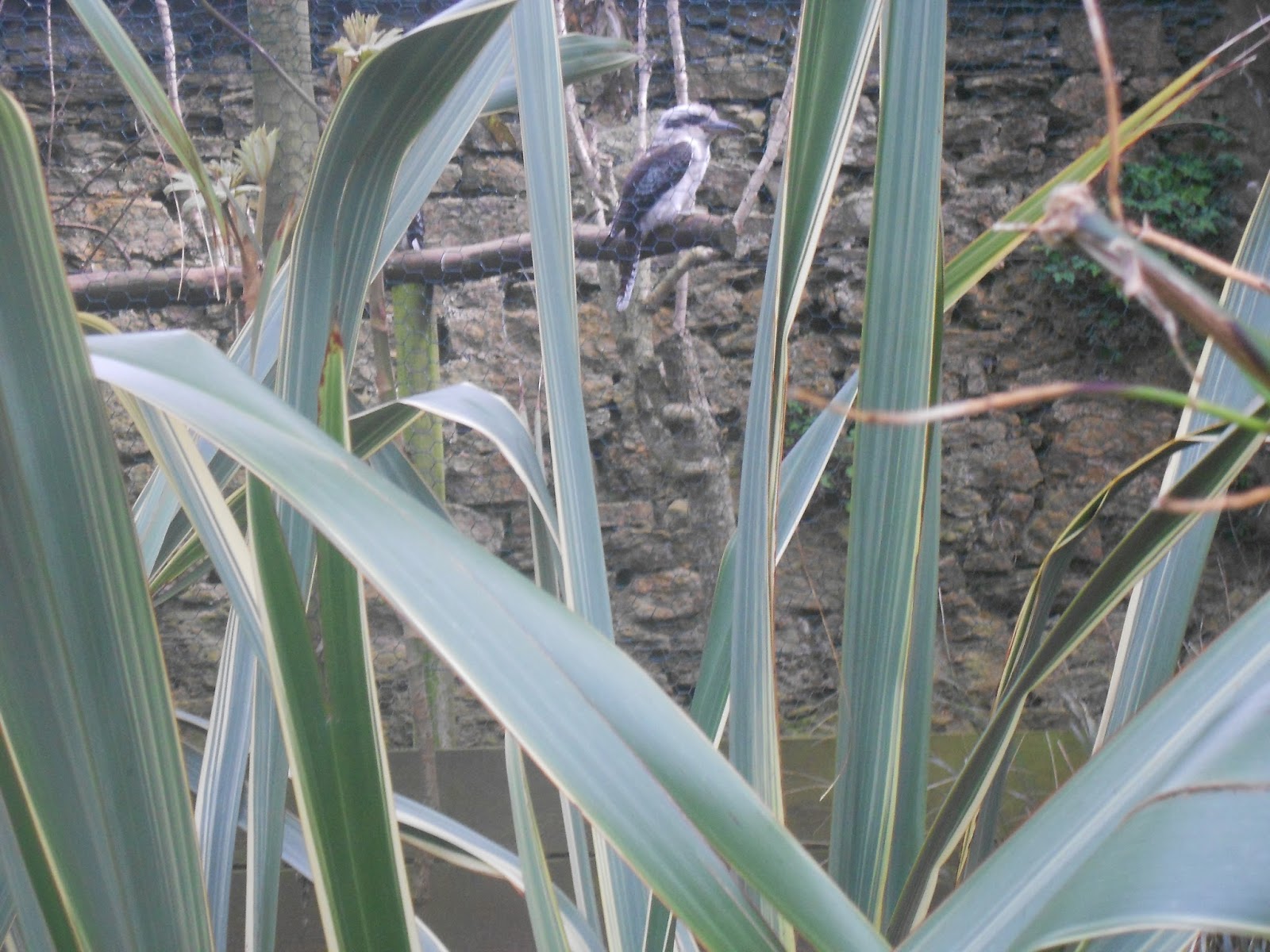 Kookaburras ,yes a little of Australia here in Britain. Ollie was quite intrigued by the noise they were making.
If you are ever this way it is a lovely place to visit, as well as the spring flowers there are also the bamboos etc. One of which I loved the Culms , the stems of the bamboo, Think I may have to ask Dale ,if we could have one for our garden. 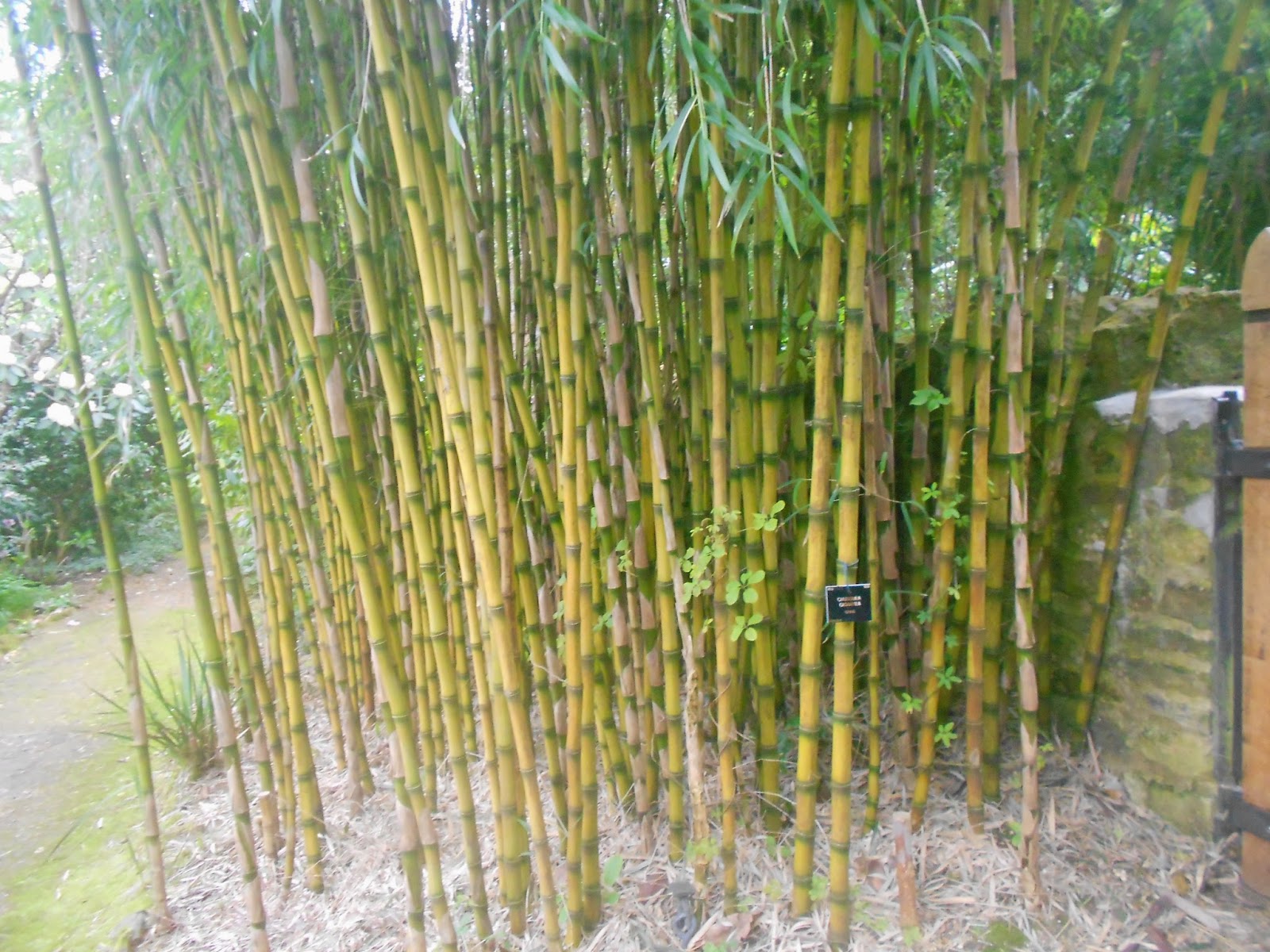 So after the visit we went to our local hostelry and had a pub lunch. Martin and I before we were married lived 300 miles apart. In those days ,way back when, we had no phones, no e mail , phones were in a box at the bottom of the street, so letters were sent every day ,sometimes twice! What did we find to write about,heavens knows, but letters it was and a meeting every 3 months. So my dear man saw this and thought it would bring back memories, 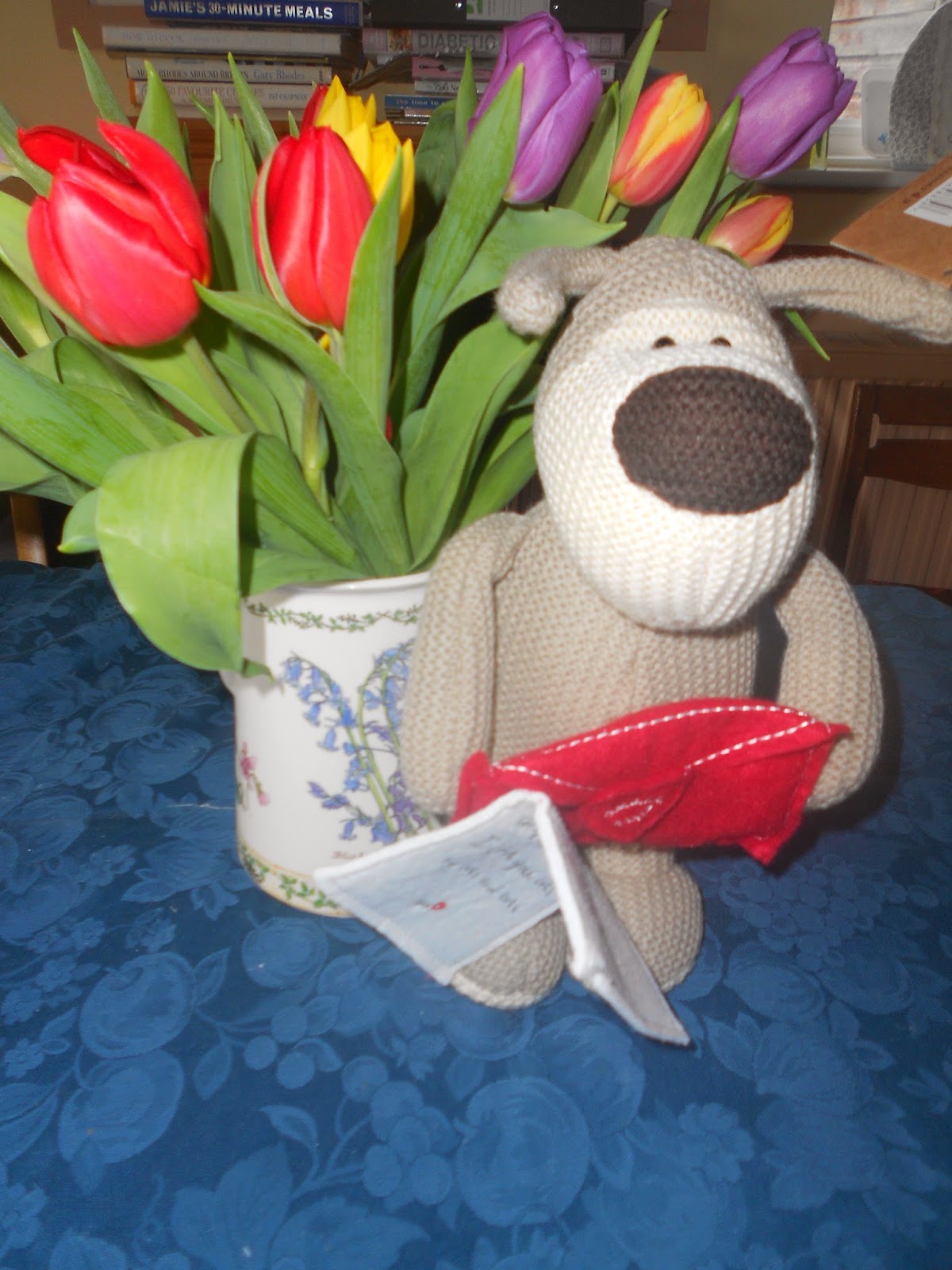 A boofle with a letter and an envelope with SWALK on it. Oh so many memories. The tulips were also bought for me. He is a sweetie.
More wildlife the Sheep Virtue series from LHN that I have been stitching along with Sally. I was going to put these on an afghan and back it with fleece. However, I changed my mind and did this. Sally has been wondering why I sent Martin out to buy rope!
What do you think. 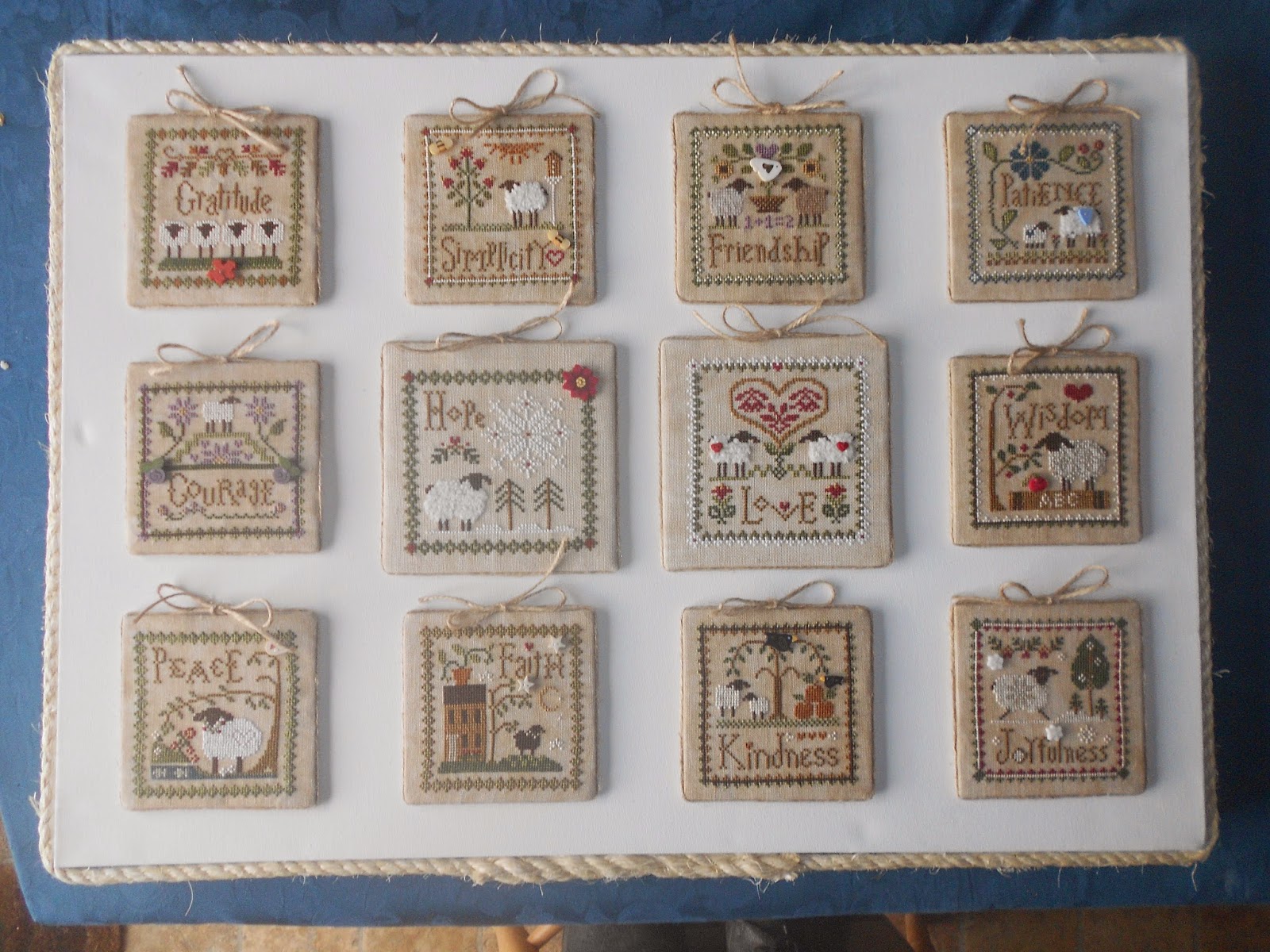 Here it is in situ. 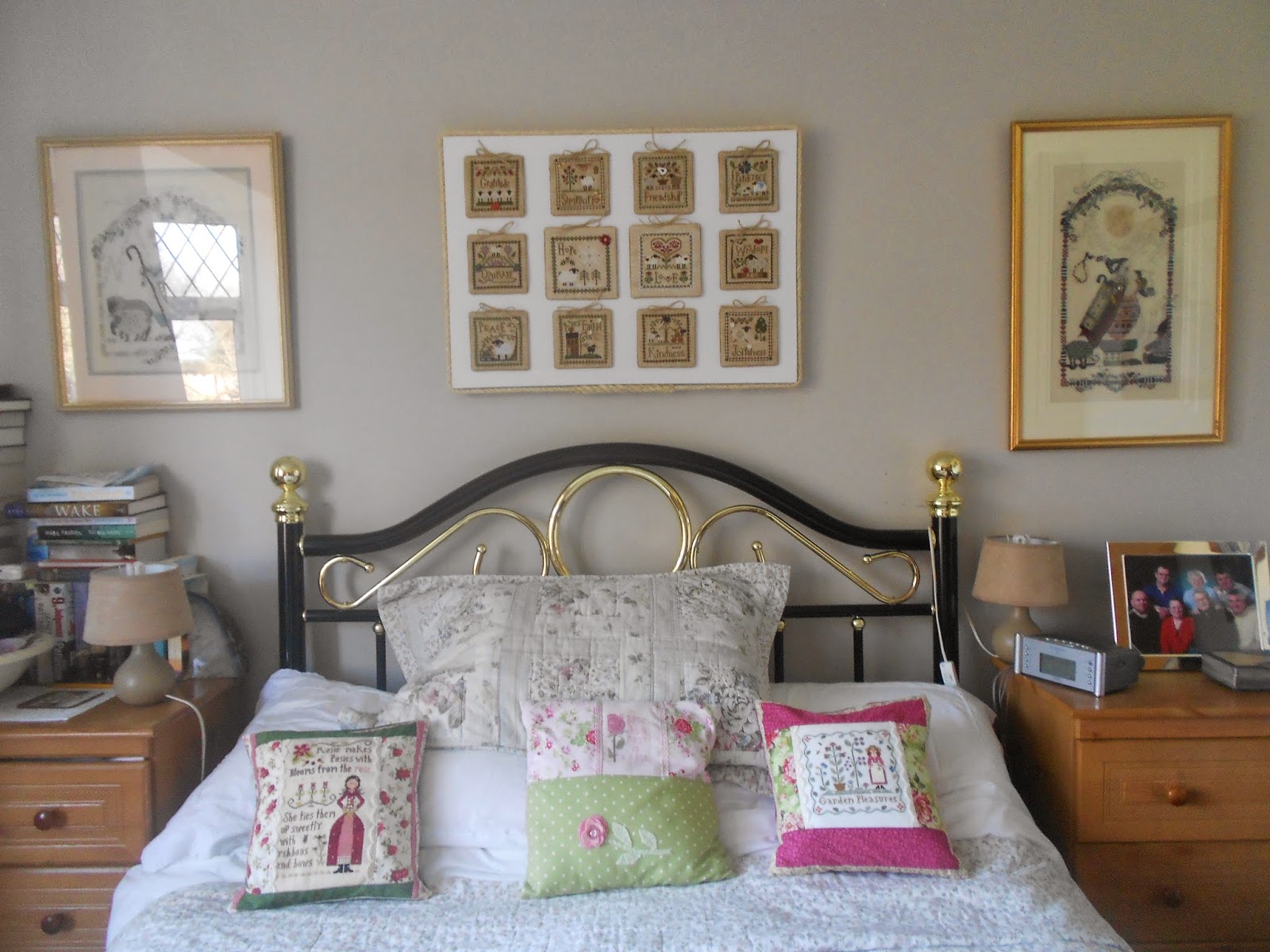 Also sitting on the bed is Rosie. Here she is finished and I must thank Julie and Mr Stick over at Needlecraft Haven and the girls of course ,for encouragement in finishing this on the UFO nights. 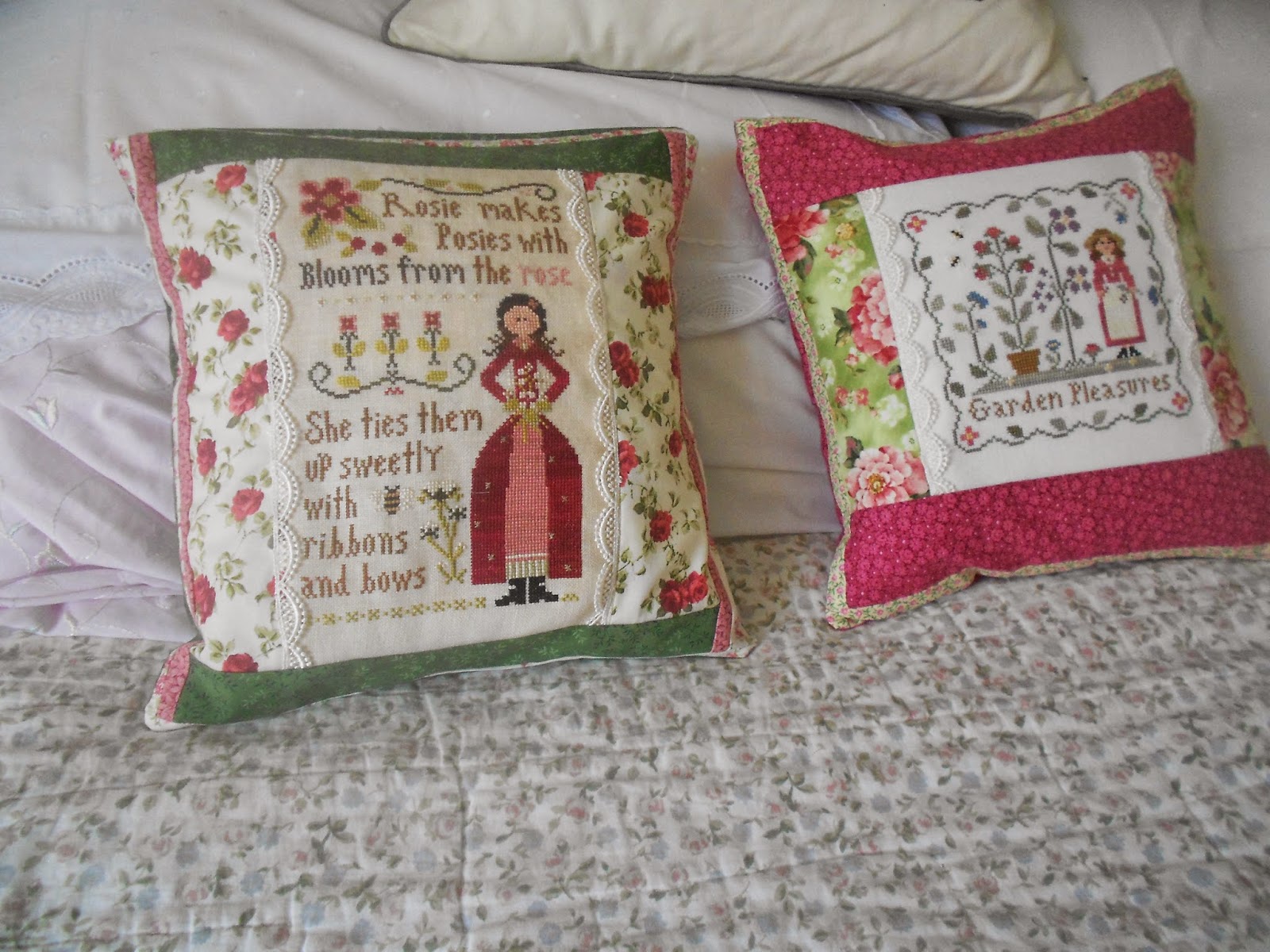 Then another little finish Day 5 of the Little Stitchers 12 days of Christmas. 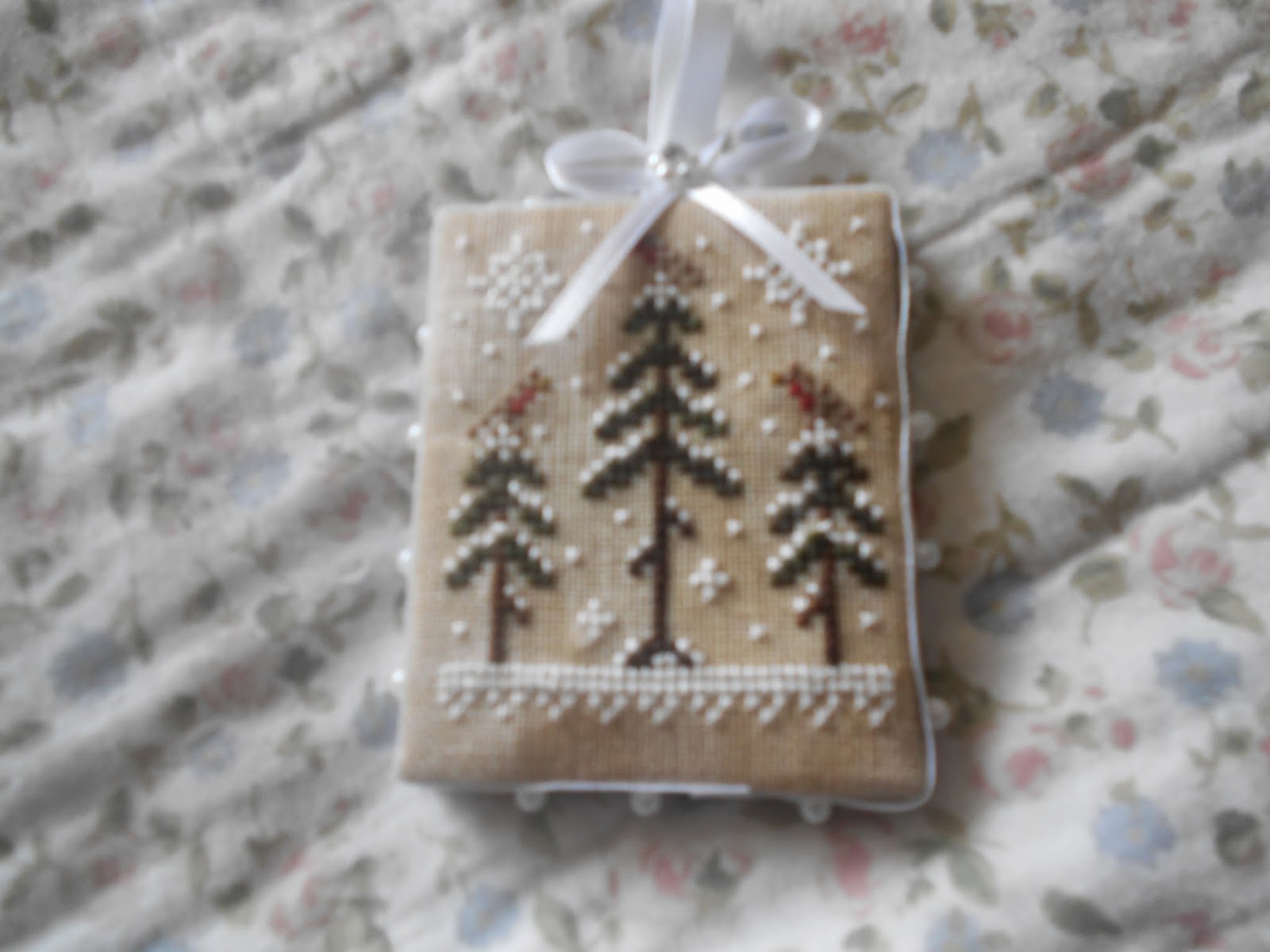 The birds should be all red but I cannot get my head round red birds.I have had stash arrive too from the releases at Nashville that I ordered from the U.S. 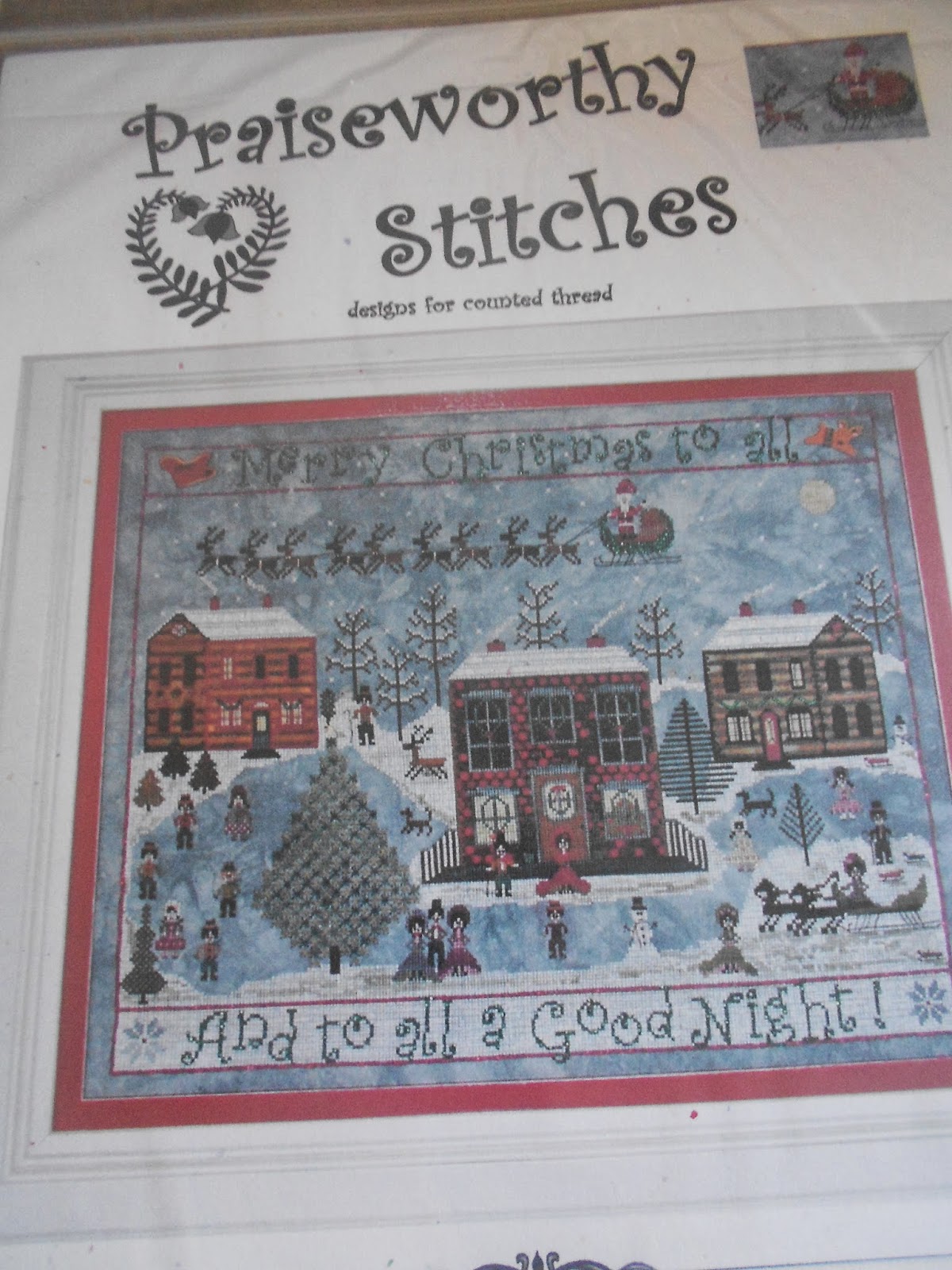 These were a birthday present and today came fabric I thought I could do it on but is it too light ,and grey. Opinions please. 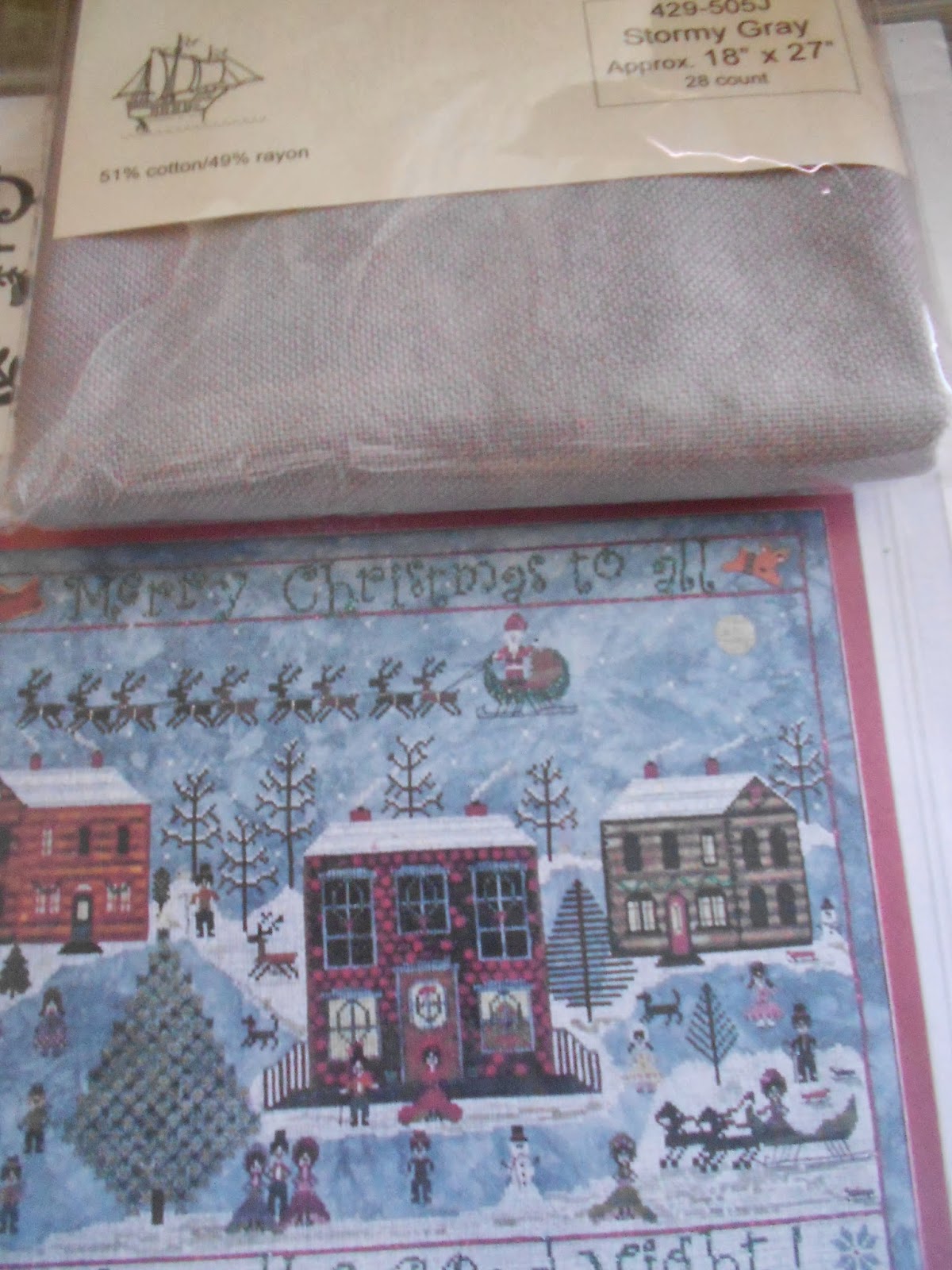 This was the other one I had. 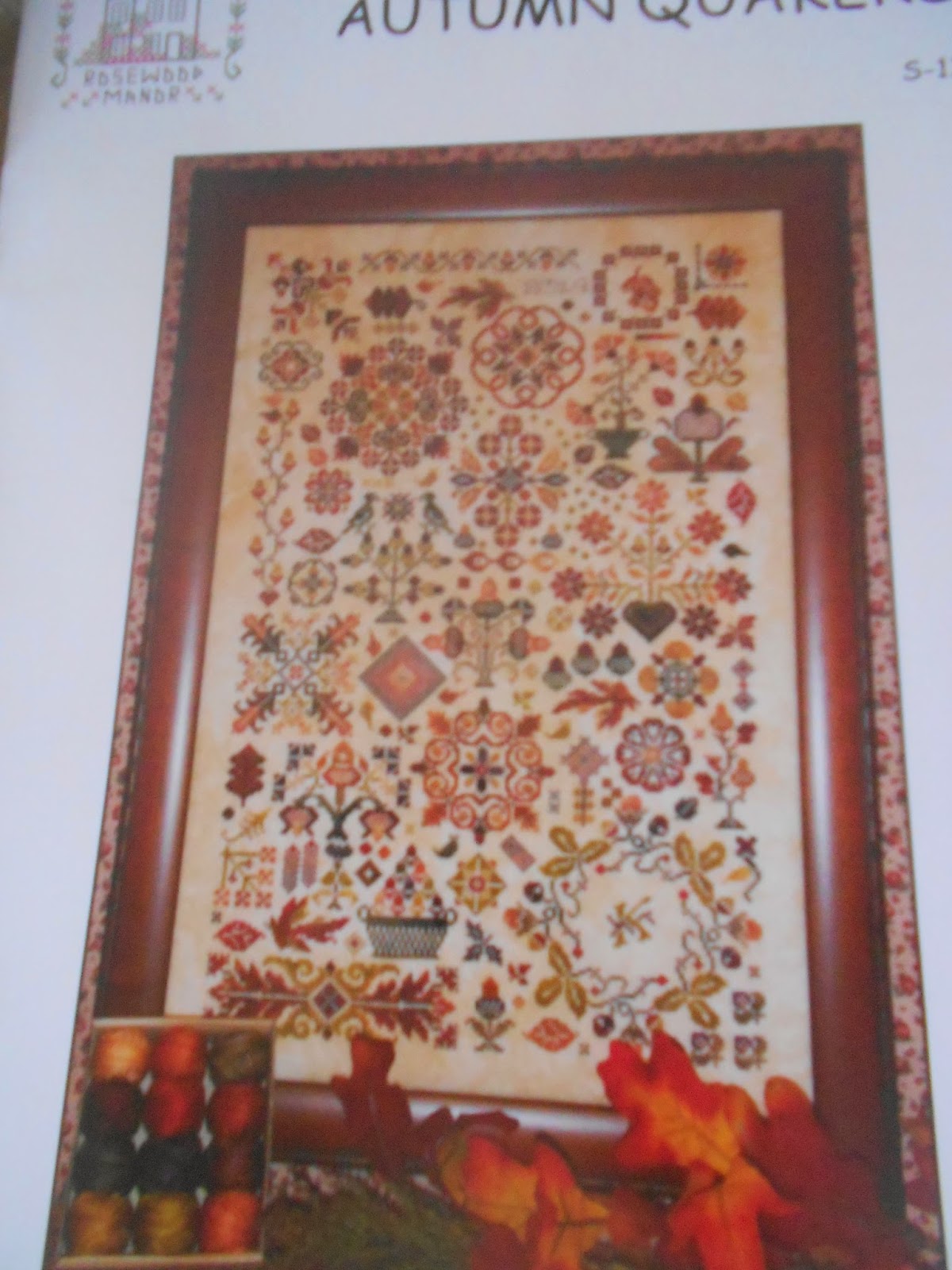 I have to save up for the Valdani threads.I did look for a conversion to Dmc , but a few are not on the list so I shall bite the bullet at some point and get the proper ones. So my dears I think I have given you chapter and verse , I see I need one more person to follow me and I shall hit the 200 ,who would have thought. If you would like to mention me on your blog and ask the person to say who sent them I would love to get to the magic number.
One more thing came today , I have been loving the trailer music for Shetland . I found out who was singing it and it arrived this morning. 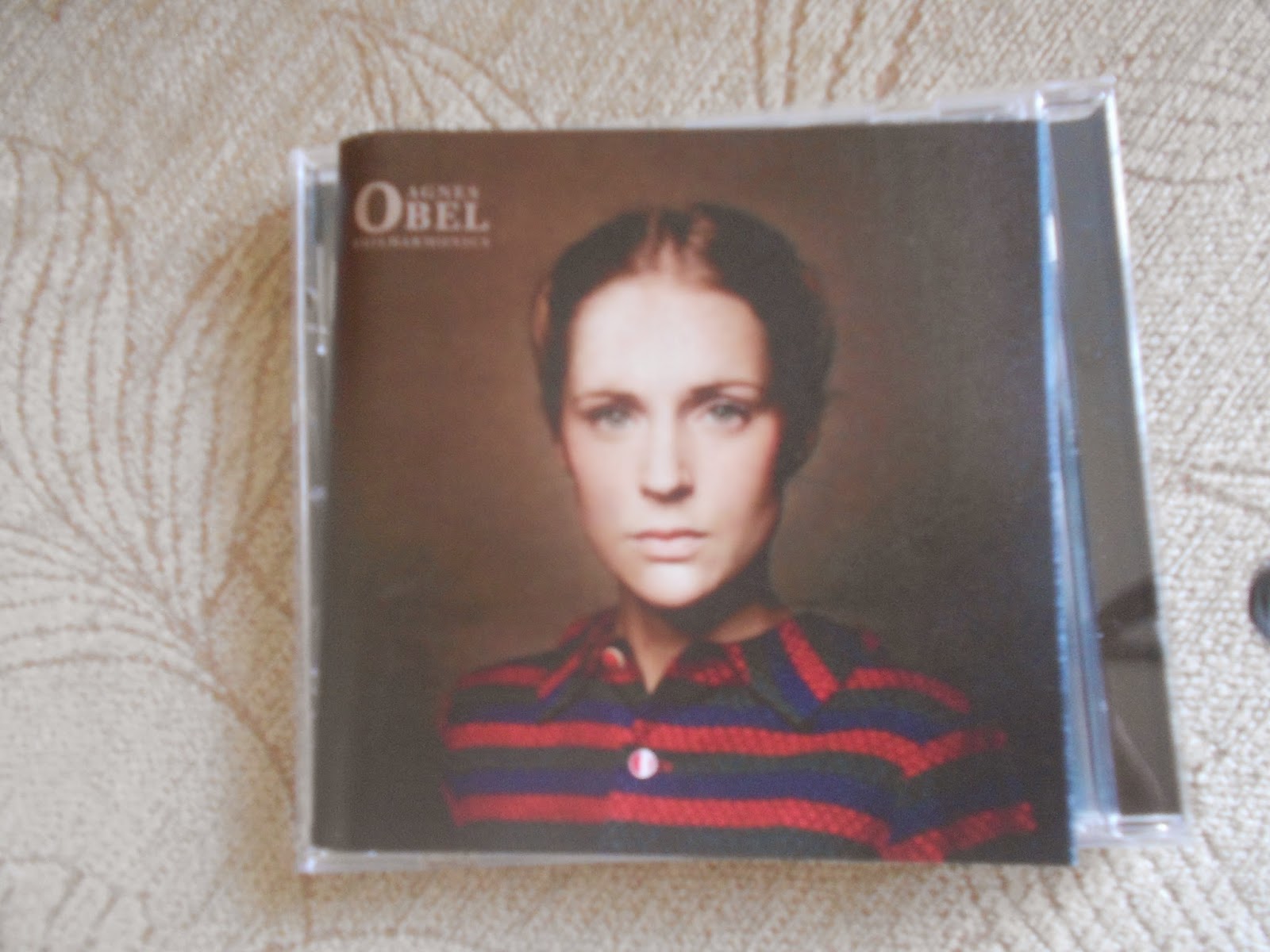 I thank each and everyone of you for the comments and for reading this. I keep meaning how to find out how to answer your comments but so far not had any luck.
So for this time its goodbye from me and take care of yourselves.
See you next time.

Congratulations on 47!! years! Wow! I respond to comments through my email. The comments pop up in my email.

Happy Anniversary! Congratulations on a job well done with the 'Sheep Virtues', it looks gorgeous.

Happy anniversary Barb,47 years is wonderful. love all your stitching and thank you for taking us on such a lovely walk with you x

Happy Anniversary to you both, all those letters, did you keep them? Abbotsbury gardens are lovely - Dad and I were amazed at how tall the trees were.

Happy anniversary to both :)
Your room is looking so cute and all the stitches are so pretty..
Hugs x

Happpyyy anniversary :) love the place you went for a walk ... gorgeous flowers and views .. Hi Olly ...and wow look at all that gorgeous stitching .... I have just started Rosey .... to answer the comments ... do you have them going to your email ?? if not when you go into your comments on the blogger dashboard you should be able to reply to them there :) hope that helps ... love mouse xxxxx

Congratulations Babs and Mr Babs 47 yrs .
Love what you did with all your sheep looks great.
All your stitching looks great.
Lovely photo's of your day out , Hugs.

Happy Anniversary Barb. That garden looks beautiful.
I love the finishing on the sheep virtues.
I'm like you, I always change the cardinal birds into robins on my stitching.
I love the Praiseworthy Stitches design. I'd say it needs a variegated blue linen, maybe something like this one from Crafty Kitten?
http://www.craftykitten.co.uk/winter-skies-2349-p.asp

Happy Anniversary!! Thanks for taking me along on your gorgeous outing.
Lovely new stash. Your finishes are just wonderful and they look so great in the bedroom!

Anniversary wishes to you both, the boofle is adorable and such a thoughtful pressie from hubby.
Wonderful tree sculpturing on the logs, that's very impressive. Lots of lovely things to see on your walk. Ollie seems to have enjoyed it.
The virtues looks fabulous, such a clever idea, you do come up with some great things.
Rosie looks right at home on the bed with her partner, hopefully she'll be able to get out in the sunshine in a few weeks time, today is officially spring so we should see a little more of the ball in the sky.
Nice new charts, I do like the blue the original is stitched on, it looks like a winter sky.
love to you both xxxx

Happy anniversary. Yours stitching is so beautiful, i really like the way you have done your finishes on the sheep and the cushions too. xx

Beautiful pictures! That's too bad about the "too grey" linen you bought - that pattern sure looks like it would look best on blue- afraid if you did it on the grey it would look dreary. HAPPY ANNIVERSARY! (& congratulations on hitting 200!!!)

Lovely place for a day out. Happy Anniversary.
I like how your decided to finish the Sheep Virtues.

Loved the photos from your day out. So beautiful. Ollie looks like he enjoyed himself.

Wow! I love how you've finished your sheep! It looks perfect.

Rosie looks so pretty all finished up as does day 5. I'm enjoying these so much and we're going to have a lovely little display when we're done.

See you later my friend xx

Happy Anniversary! Loved going on the walk with you. Some fabulous sights to see. The sculptured trees are amazing.
Beautiful stitching and finishing. I agree with the others, grey is a bit too cold. It's a lovely, cheery winter scene so think a blue would work better.
Have a good weekend.

Congratulations to you & Martin on your anniversary! What a sweet gift he gave you, & what beautiful photos all around! Love seeing all your stitching too : )