Well hello my blogging friends ,I thought I had better give you an update on my doings or undoings as the case may be. I had a rather unwelcome visitor this week ,who caused a rip it hole in my last Know your own happiness.So fed up was I that it went into the bin as it was unrepairable. Then on Monday it hopped out again and this progress I had made on my Wordplay ,was found to be out by a thread. 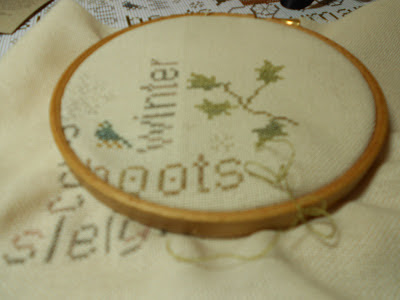 So I am inbetween 2 minds do I start it again,or rip it out? Shall make up my mind by Monday when I see Sally again. So I got my magic wand out and this is what happened to the frog, 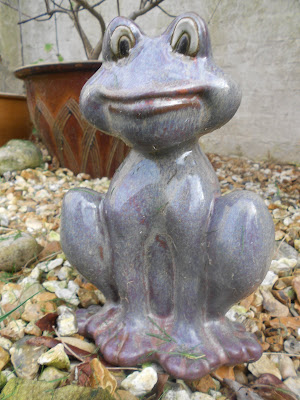 Hee Hee I am not really a witch. I did have a finish this week over at the Parlour in the Little House in the Country I had a new start,firstly though both Miss Julie and I finished the same design ,here is mine. 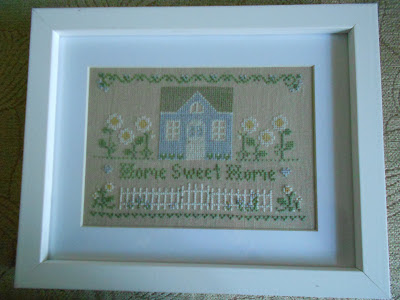 Thia is Daisy Lane Cottage by little House Needleworks. After some deliberation I decided on Vintage Christmas by Country Cottage Needleworks as a new start this week. 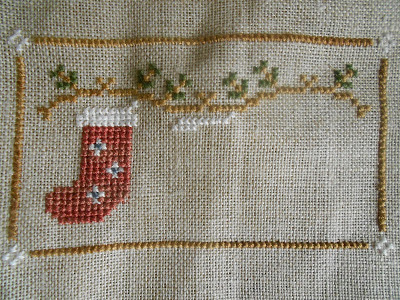 I did have another new start, but as that is for an exchange I cannot show you that. On Saturdays we have over at NH a ufo night with Julie and Mr Stick ,Julie has been very clever on getting us to KEEEEP Stitching whilst watching Strictly. A favourite programme of mine ,as is Merlin and Casualty that I stitch now all evening on Saturdays, then it is the results show on Sunday and Downton so it gets and airing again. I have made a bit of progress on it and now I shall show you the before and after 2weeks. 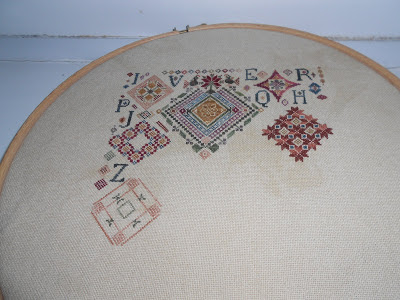 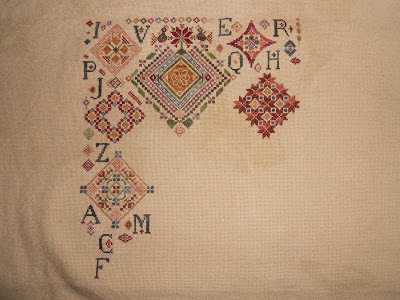 I am so pleased I turned that frog to stone! I have so much to tell you this time so better get on with it. Martin had a craft fair last Saturday ,this was his stall.The day was a little slow he said but he did sell some things. 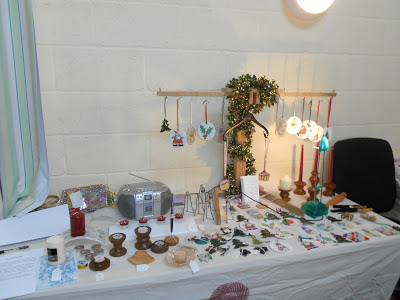 I think maybe it is a little early and will book for the end of November next time. When Jack saw his grandads woodturning he asked if he could come and have a go whilst on half term. This is said Jack in Martins very messy garage. Couldn't get a car in there even if you wanted to lol. 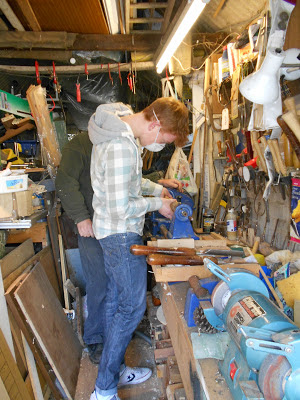 I was going to show you a pic of the bottle stop in ash he made and a redwood candlestick holder. He is supposed to be sending me a pic but it has not materialised yet.!!
He has been to lunch today with Katy (girlfriend) they had spaghetti bolognese. I do like Thursdays as it is so nice to see them. 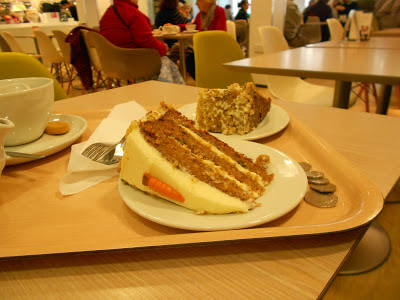 Yesterday I was collected and taken into town with Kate (daughter) and we were very naughty went to M&S and had tea and cake. Oooh yum.Kate couldn't believe I was taking a picture of the cake. Now maybe she was right and I shouldn't have as  it will be held in evidence against me . 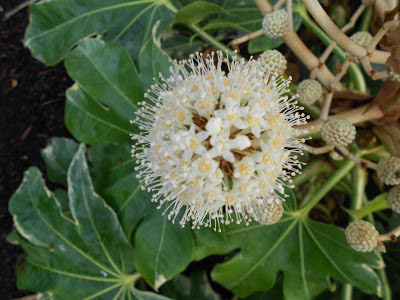 Martin and I took a walk round the garden the other morning and just had to show you this. It is a Fatsia Japonica Varigata and it is in flower . Isn't it fab, looks very alien like and it is laden with flower as you can see all the little round flowerets waiting to burst open. Do not take too much notice of the spelling of its name ,I think I shall have to find her a name of her own. Any suggestions. 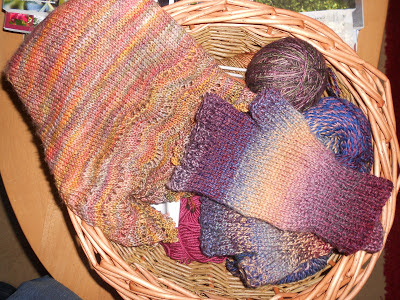 I have been knitting too and another finish means I now have some fingerless gloves.I am not sure what I want to knit next ,I had an urge to knit Martin a cable jumper but the price of the wool was frightening. So a rethink on that one.
I am sure I had lots more to tell you but the brain is being addled by pain, so I think I shall call it a day. Thankyou so much for coming over to keep me company it is always good when friends call. If you left me a little comment thanks, I was thinking should I carry on with this blog ,but had such nice mail from Sally and Angela that I had second thoughts, oh well it cannot be that bad.
Hope you are all well and if not get well soon .Loads of sniffles and snuffles doing the rounds. A few of you have worrying times - apparently we are not given more than we can handle so just hang on to that handle.
Big hugs for you all
Barb.x

Lovely stitching. Glad you sorted the frog out.

Take that Mr. Frog!!
Take good care of yourself!

I hope you soon feel better! I also hope that you don't end your blog. I quite enjoy my visits here : ) Love the CCN Vintage Christmas! Of course I'll have to check my very messy stash to make sure I have it : ) Looks like you're changing the color theme? I will be doing that as well when I stitch it.

Great progress on your stitching Barb.
If I find myself one thread out I usually fudge it somewhere else in the design to make it match up rather than unpicking.
There is no need to feel guilty about your cake, I can quite clearly see that it is carrot cake, which makes it VEGETABLES and one of your 5 a day.
Love the fingerless gloves

Dear Barb,
I am leaving a comment and shall continue to - thank you for a lovely blog - and may I make you laugh - I thought you mean't you had put poor frog out in the cold, and then realised what you really mean't!
Hope you are more comfy now, what a lovely finish, and your DH work is beautiful.

Hi Barb
First things first ~ NO more thoughts about quitting, I have two bunnies sitting here now with very grumpy faces at that news and I cannot be held responsible if they decide to head your way, remind you that you're their biggest fan and take over from that rotten frog!!!
You have been busy busy and isn't it lovely when you get a good weekend's TV and lots of stitching hours too!
I always think once Halloween & Bonfire celebrations are over people then concentrate on Christmas so I'm sure DH will do much better next time ~ I should know I still have my gorgeous Buttons bunny he made for me hanging from my window.
I love the flower picture, I think we should call it Starburst ~ so pretty.
Hugs to you both and Ollie xxx

Hello dear Barb. Glad you did away with that frog and may he reign no more! Your word play does look lovely.I would say if it's only one thread out and doesn't make a huge difference then leave it as is!

Quaker Diamonds is coming along beautifully.

Yummy I wouldn't mind a piece of that cake!

Love the mitts. Such pretty wool. My knitting is on hold for now until I get some Christmas stuff done.

I hope you are feeling better real soon my dear friend.

No more talk of stopping your blog! I cannot imagine blog land without you {{{{hugs}}}}

Beautiful stitching, fab LHN finish and such a good start, you do stitch quick :)

Ooh you are doing QD, it is in the pile that threatens to tip over here! Sorry I have been MIA on Wednesdays, was in Wyoming and this wee k we are moving in and I am sick but telling myself it is NOT bronchitis! Love the gloves, I am just about to start the second of a pair. Hugs for the pain, dear Barb.

Your stitching is wonderful ... Love the little sock of the vintage christmas !!

I found you through Stitchyangels Treasures.
Sorry to hear about the frog!
Your finish is lovely and your wips look really pretty too!

Goodness Barb, do you really think you can get away with not blogging!
Sorry I am behind with reading this - life is a bit hectic at the moment but I do so enjoy your ramblings.
Love all your work, vintage Christmas looks as though it is going to be another beauty and Quaker Diamonds looks great.