We can all do with a little help 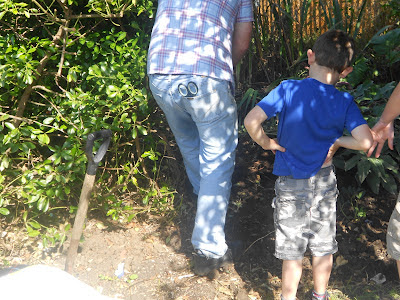 A little help is what we got! 2 boys came over to help grandad and I move some bark (not Ollie) from the front to the back garden. Oh did they have fun and did not want to stop.Alfie hands on hips 5 going on 55 supervised when needed ,just to make sure grandad was doing it right. This is the side that just needs a little tlc. The other side is the new bit , but photos do not show just how much is in there in fact it looks a little empty. 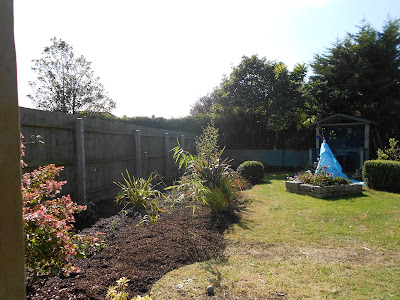 Of course the wigwam was temporary -shows how much I am out of date apparently it is not a wigwam it is a hobbits house! This border will look so much better next year. 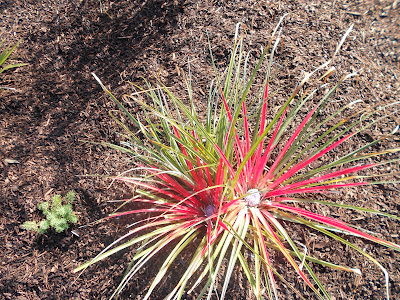 The leaves on this are green during the winter but at this time of year are a bright scarlet colour the flower in the middle is pink which turns white then to turquoise blue with a yellow middle. Certainly different. Since this was taken the gingers at the back have started to flower and we have screened the wall with bamboo screening and put a redundant water feature in between the bamboo and the gingers. Will show you again later when all are a little more established.
Sorry about the photography will get a man that can ,to take some better ones. 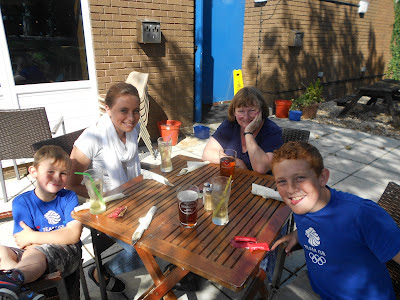 We did have a lovely day and at lunchtime we went to the pub opposite and sat and had lunch. Scuse the photo of the woman with the new haircut ,not sure if I like it or not yet. Seem strange after having it longer for a while.
Then we went home and the boys carried on moving bark until 4 pm. 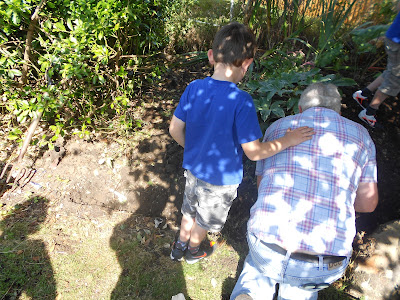 Just love this one of Alfie, there must be a caption for this one don't you think.?


Well enough of the gardening . I have finished Caitlins damask shawl .I expect she will be over for it soon.I did have a bit of a time with it and like the first one I did say damn and blast more than once. Just hope it gets washed carefully ,or I can see it becoming a dollies shawl. 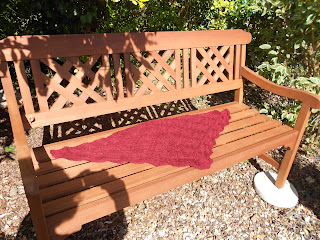 Here it is sitting on my new bench, well I had to have a new bench to sit and admire the new border. 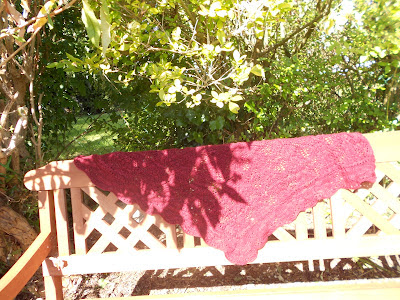 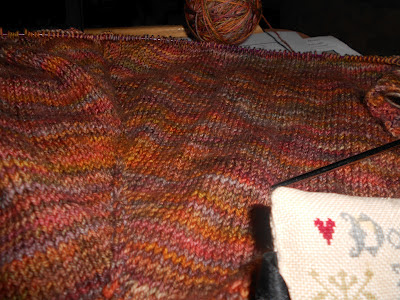 This is the latest shawl,another holdenette in Autumn shades. I am also going to attempt some fingerless gloves so I sent for some more wool and also to do a shawl for the Dear Mother in law for Christmas. Not sure if the colours appear right in the photos .Twill give you some idea though. 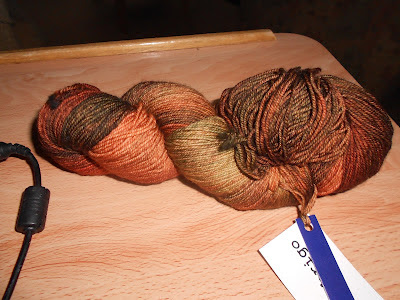 This is for the gloves to go with the shawl and here is Mils shawl to be. 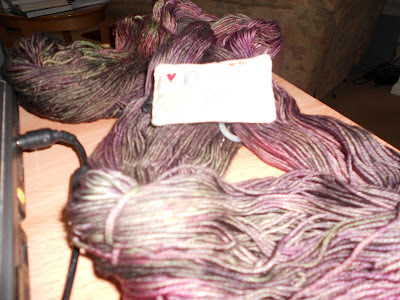 So shall have to go find my stitching head and see if I can do some to show you next week.i am finding it a chore at the moment to stitch which will never do. The cottage in Daisy Lane is almost there, just have to do a bit of roofing then I can start on the fence and "twiddly" bits. My sal with Sally , she is a dear as when I see a post from her she gets me all fired up again,is going very very slowly .I think its the colouring I do not like. I am also as I said trying to read a few more books but this one is a very very long one that I am reading . It is Fall of Giants by Ken Follet , I ordered it for my Kindle and I am about 30% through it. The sequel has just been released and I have got it in hardback for Martin. Not sure if I will read that ,as it is another whopper. This coming weekend we have our Autumn exchange to open and I shall be able to show you next time. So at least you will have some stitching to see. Ollie news now and it is not good. There is no cure for his foot condition, we took him 40 miles to see a skin specialist vet ,and after 2 hours of consulting he said the only thing he could suggest, if it was really distressing the dog was surgery ,fusing his toes together . He said he had not seen this condition so bad in his 20 years of practising. It is caused by the hair growing into his feet rather than out. I was going to suggest hair removing cream but thought it sounded a bit flippant. Poor old dog ,but it only worries him when the are ready to burst and within an hour or so he is fine. So we  just have to try and keep any infection under control by shampooing his feet after his last walk of the day.Not walking him on roads and pavements just fields and beach. So I took this pic of him in his chair sulking. 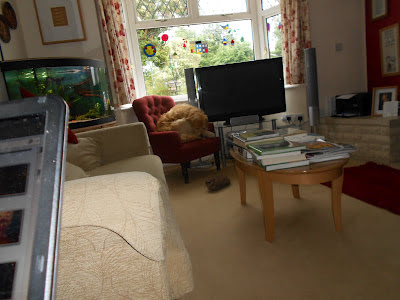 So all my news you have this week, oh I did have a giftie surprise from my Julie friend today a holiday souvenir a tea towel from Scarborough, she said it was for Martin and I to share! Well I usually get the wiping part and he does the washing,so it is mine! Also you that have dishwashers, beware !as Julie said a quote from her hubbys dad is,those that wash up together, stay together. Well we have been together a while now so maybe there is something in it. Now going to leave you with a pic of the flowers my Dh gave me last weekend , arent they something. 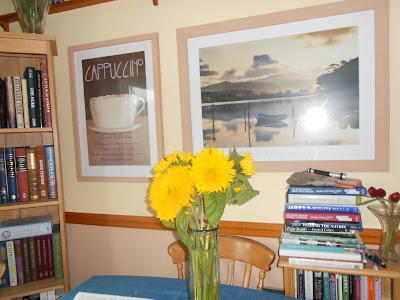 Please excuse the clutter here there and everywhere ,just thought you might like a touch of sunshine whilst the rain is hammering down-just started again. Thanks so much for leaving comments my friends and followers ,will try for a few stitches this week. Need a bit of encouragement I think. So to you all take great care and I hope to be back with you again soon. Hugs n stuff Barb x
at September 25, 2012

I have a husband who likes to give me flowers too. Isn't that a good thing?!
Poor Ollie. What we do for our pets.♥
Wonderful gardens. Such work! I hope they are not much work for the future.

Lovely photos Barb, your garden is going to be beautiful.
Well done with the knitting and I'm sure there will be some stitching for us soon.
Poor Ollie - hope he doesn't mind having his feet shampooed too much!

Beautiful yarn colors. Poor Ollie. Laser hair removal? I never heard of that condition. And believe me - that's not clutter to me!!!

Your garden is looking gorgeous, I like the sound of the colour-changing plant. You realise I'll expect pictures of every stage now don't you ;D
I am copmpletely in awe of your shawl knitting. I knit a neckwarmer for David the other day. It was a tube shape done on circular needles and a pig to knit. When I cast it off I found I'd somehow got a twist in it, must have been when I joined it into the round. Normally I knit the first couple of rows backwards and forwards before joining to avoid that, but I thought I'd be clever!
Don't say anything, I told him it was a Moebius scarf :D

Thanks for sharing the wonderful photos of your new garden border,and new bench lets hope next year will be a better one so you can sit out in the sunshine.
Your knitting looks fab.

Grandads little helper is so sweet!

Your new haircut looks very lovely, i like it.

Well done on the knitting, you have been a busy bee. MIL will love her pressie, such a useful item for an elderly lady to have.

Much love to you both and to Ollie too, he does look nice and comfy in his chair by the window. x

Your garden is looking lovely Barb. Some lovely photos there. I really like your new haircut. I think it suits you.

Love the shawl. I erally must get my Holden blocked.