The cameras in the house have been travelling so I had to wait for their return to be able to give you a catch up. You may wonder where they have been , well Graeme borrowed them to take to Philadelphia and New York. So they have been some distance away. Graeme ,Sue and Ella had a wonderful holiday , they stayed with some friends who emigrated a couple of years ago and then went on to New York for a week in a hotel. Sue said they were really hot on security and she was asked lots of questions before being allowed in to the country. Now they are back to work, school and reality. They came down at the weekend to return the borrowed bits and bobs and brought me a little bit of America and at this time of year it had to be a pumpkin. 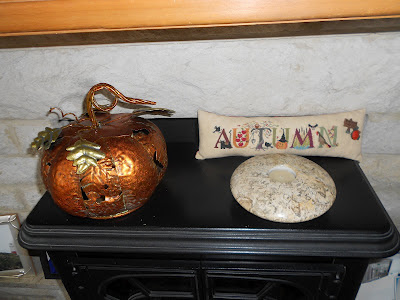 Whilst they have been away we have had a garden designer who specialises in exotic plants, putting our garden to rights,he has been working like a trojan, our big border out in the back garden had almost reverted back to the wild, with our holly tree which was 10 ft tall being covered in brambles. In fact all that border had been taken over and was really looking neglected and uncared for. I am not able to garden anymore and although Martin knew it needed doing he found it beyond him to tackle it. Anyway Dale came and had a look and now in 2 weeks we almost have a fabulous (well I think so) border.We have bamboos and ginger plants and a banana oh lots to look forward to . He supplied all the plants and it has membrane down, the Bark comes on Friday so next time I will let you see what WE have been up to. Well I did have to make numerous cups of tea and iced drinks when it was hot. It is small world ,as I found his wife used to do my hair about 17 years ago, she left to have her babies and they moved to Cambridge. They decided to come back to Weymouth and he started his own Coastal Garden company. So now I have a brand new haircut as I have not been able to use my hairdresser as it is upstairs and I cannot do stairs. Kirsten said she would come in after work and do it for me,she works as a teaching assistant at the local secondary college dealing with children with Aspergers. Sorry rambling here aren't I. I am sure you want to hear about stitching etc don't you. Well not a lot being done really. Think I am losing the will here. I did do another cushion for the berries and birds basket, Sally and I have decided to have a little break from Shepherds Bush this year and do Blackbird designs. I do find I am missing the muted colours and delicateness (is that a word) of SB designs maybe I will have to sneak one in here and there. Anyway here is my first Blackbird on a Monday with Sally done. 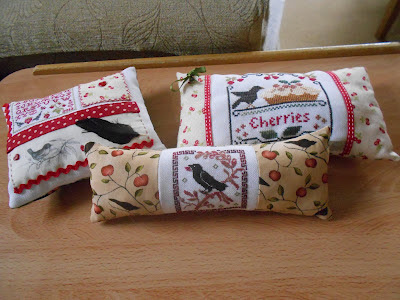 I changed the colours that were used on the chart and had added a few beads to the birds beak. This week I am did a little more on a ufo that I found in the box of abandonment ,it is a Blackbird Loose Feather Design ,Beyond my Heart. 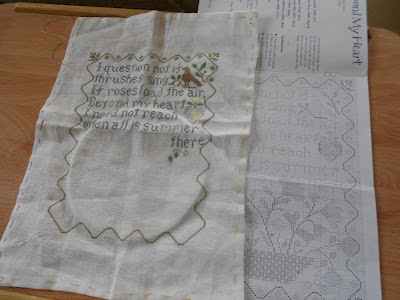 You will have to excuse the crumpled and folds in the fabric will press it next week.I am wondering if I could be a cheat and use it on Julies UFO night too on Needlecraft Haven then I needn't get Quaker Diamonds out until later. Talking of my friend Julie I sent her this ,this week , I had ordered it for myself as I have all the BP books and could not resist this to add to the collection. I know Julie likes Peter and BP too so I sent it along for her and to read to her dear little grandaughter Izzie. 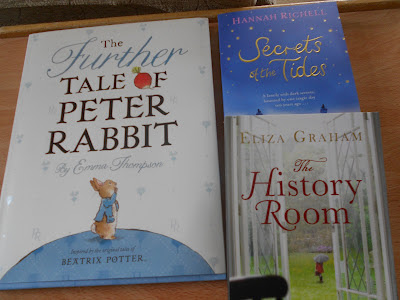 Peter does seem to get himself into trouble . The other two I liked the sound of the write up so those went into the basket too. I have ordered a few others but they have not arrived yet . Hairy Bikers diet book , (well one can hope) a book on Bamboos which we borrowed from Dale and thought it might be useful to have and a Katherine Webb book that I cannot remember the title of. I have been reading lately and would like to get to 40 books this year but I have a way to go yet. Tonight it is the start of the second week in the parlour of the little house in the Country - so if you would like to join us there then come along to Needlecraft Haven and sit in the parlour with us and stitch whenever you like during the week. If you can I would love a pic from you each week and we will see which designer of LHN, CCN,or the Sampler girl you choose. Last week after the summer break we had our first meeting and I am looking forward to seeing what everyone has stitched this last week, it is not a race, as much or as little as you please just has to be one of the three designers. Here is my choice for the first piece. It is a LHN design called Daisy Lane Cottage . Not a lot done but will do a little more this evening. 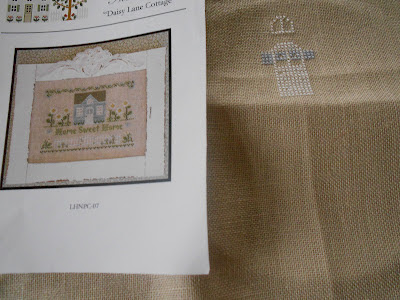 I also sent for this little booklet and it is lovely , la d da designs a plenty. 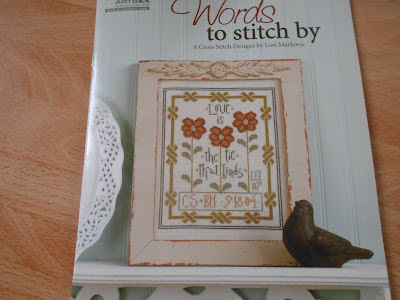 I have more (only a little) stash coming from the US the last wordplay design September ,then all I have to do is stitch them ,also the LHN Its snow cold ornie chart. I am sorely tempted by The Primitive Hare Brooms for Sale ,but trying not to fall in the pit that is calling my name and telling me I really need it!!! Well only one thing left to show you which is Martins latest creation. 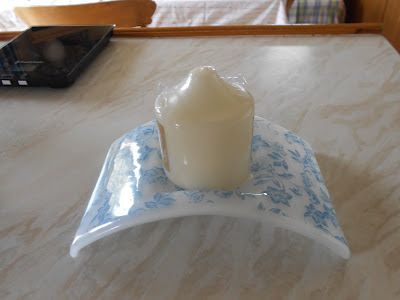 So looking forward to Strictly and Downton so maybe more stitching will get done. Take care all and hope not to be so long next time in posting. Hugs and stuff Barb.
at September 12, 2012

It's lovely to see a post from you Barb. I have missed you. Love your BBD finish and your UFO too. Nice to see it back out again.

Love your new La D Da booklet. I have to stop buying. It's no good. I'm having a crisis and more stash really isn't going to help!!! Lol

Beautiful work by your husband. Can't wait to see your garden pics. You have such lovely stitching going on.

Wonderful creation by Martin, such a talented gentleman.

Such beautiful stitching, of course the UFO will count with Mr Stick, any UFO counts.

I love my new book, you are such a treasure to send it for Isabelle and i to share {big hug}

I too will be starting Daisy Lane this week in the parlour, cheated last week and did a CCN ornie for both the ornie SAL and the parlour night - 2 for the price of one LOL.

Looking forward to see a picture of your garden.
I like your cushion. Same goes for your Wip's.

I had to run over to Amazon and pre-order the Peter Rabbit book. It will be the perfect birthday gift for my dd at college. She loves anything Beatrix Potter and really likes Emma Thompson as well. Thanks for showing this!!

What a pleasant post! I love your blackbird stitchings & the Loose Feathers in progress ... also your gorgeous header photo : )

Love the pumpkin.
your birds and berries are looking fab . Great stitching on your other projects too .
I'm looking forward to seeing your new garden pics .X

Lovely news Barb, I'm looking forward to seeing the garden photos - well done hubby :) Your stitching is so beautiful. Thank you for my birthday gift and I am hoping to join you on Wedsnesdays soon x x

Lovely to see you posting Barb - missed you. Lovely work by your husband - you must show us some garden pictures. Love yout stitching xx

Nice to hear from you Barb. The transatlantic pumpkin is very splendid and looks quite happy in its's new home.
I'm looking forward to pictures of your garden makeover, I'd be specially interested to see how your banana does. We tried one once but it didn't make it through the winter. I suspect we are windier here than you are though.
Love the new blackbird cushion, and Beyond my Heart is looking good. I had terrible trouble getting the border to match up on that one but you seem to have cracked it.

A lovely catch up!

We have to wait until January for Downton!!! Not fair :(

A great addition to your Berries and Birds basket. What you found in your box of abandonment - great name by the way, lol - is another wonderful BBD project. Particularly the flower basket in the lower part of the design looks great.
I have completely fallen behind with my reading goals thsi year. I have so many great books on my pile but all I want to do is stitch. So it's stitching this year. Good luck with your 40 books goal.
I'm looking forward to seeing pictures of your "new" garden.