Did you miss me?

I am sorry I have not been about for a while, and thanks for the Big hug Julie I can tell you it has been needed. I am not sure what is going on as the hands and wrists have been so painful just wish they could make up there mind if its RA or not. However the main reason for the quiet period is due to hands not much stitching has been done so not a great deal to show you. Also,feeling sorry for myself here ,I have had the lurgy back scratchy throat cold cough (again!!) so not felt much like doing anything, HOWEVER now I am back and feeling much better now the cold thing has gone and I have been forced to stay away from doing much .So I have been perusing your blogs and havent you all been busy. Sally has been as prolific as usual and I hear I may have to get the clogs out for a happy dance, well got to make a noise havent you when dancing. lol.Tonight is a visit to hers for tea with Colleen, who has found her sheep and now has to stop them escaping by stitching a shepherdess.
I did get some done on Sophie and hope to get another border finished tonight. Here is progress so far girls, I think French Heart is next on the SB list. 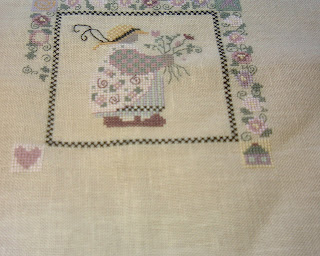 Really loving this one . Not sure if it will be a framed or pillow finish. What do you think ?
I have 2 finishes to show you one is a companion piece to A spot of Spring which I showed you last time ,this is a Spot of Summer . 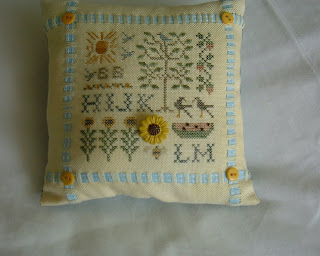 As I did not have a sun charm suitable I found this Sunflower in my box of many things and it seems to go. I also put the ribbon again around the design as I did with spring as I need them to go next or at least close to each other. I found some fabby too that went well for the back. 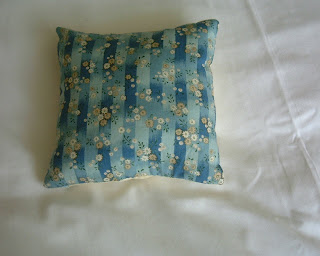 I bought this for a backing for Daisy Cottage a design from LHN ,or it may be Country Cottage one of them anyway ,I still have it to do ho hum so much to do.
I bought a new magazine or should I say Martin bought it for me when I was not up to much, called Simply Homemade, I am impressed as I am knitting a scarf from it, and Martin has made a fused glass piece from it. How many times have I bought magazines and not done anything from them ,for us both to get something out of the same mag well I think that is a result. 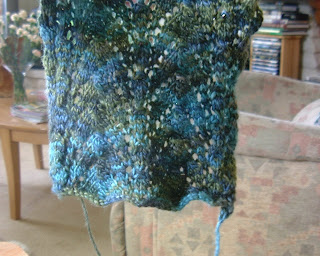 Progress so far.
Martin has been playing with glass and he fired up the kiln to fuse some glass to make a plate. This is the design before it went in the kiln. 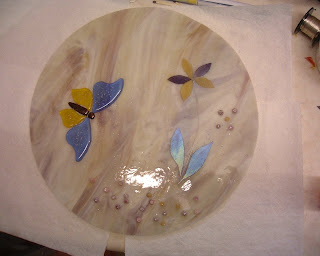 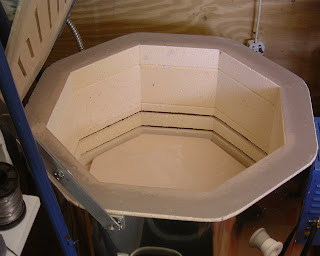 It took hours to 'cook' but disaster when he opened the lid it had cracked which turned into broke as he picked it up. Such a shame as it was really pretty. This week he had a go at a fused candle holder but cannot take pic of that until he makes the base.
I know its not stitchy but it is crafty and thought you may like a look at our other stuff. I have got another stitchy finish to show you which is A Sampler Girl freebie, this I have been doing with my Wednesday night girls . I think I told you I was doing something for the 'bedpost' and this is it. 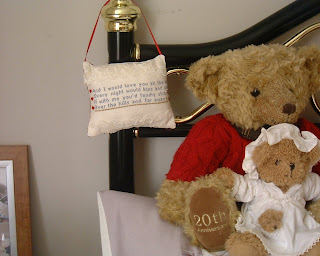 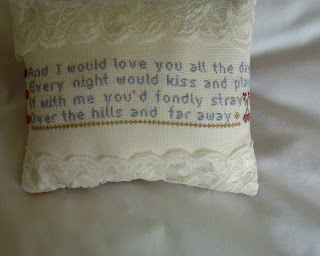 I did this on 28count fabby over one with Dmc threads. What do you think , I think it looks so pretty hanging there. Won't tell you what the other half said about the second line , I will leave it to your imagination!
So that is my two little finishes ,I know have to decide which SG I am starting this Wednesday.
Post before last I think I asked if you knew what design I had started ,got the crystal ball out, here is another update are you any the wiser? 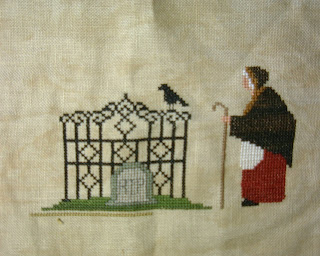 We have had terrific thunderstorms here in Dorset over the weekend we even featured in The Daily Telegraph today with a lightning strike taken over the Chesil Beach .
My dear Martin bought me this when he bought his paper today ,oooohhh Colin Firth shall be watching this soon. 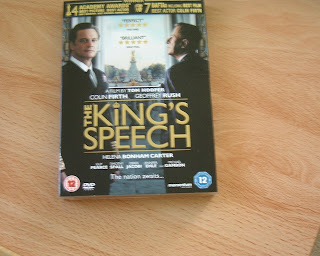 Our daughter Kate (Catherine) she was there first lol. has a birthday tomorrow, she had the big one last year, so we will probably go out for lunch and see what I can treat her to as a pressie.
Jack had his prom last Friday ,he phoned me to say he was on his way to pick up Camilla (the ex) he sounded so happy, I was a very choked up Nanny here I can tell you. He had a wonderful time and then they had a after prom party that went on until the small hours. He said he had a slight hangover the next day,he is not used to drinking unlike some of the youngsters these days.
Anyway that is all my news for now so I hope I can get some stitching done quickly, so it is not such long a wait for you.
I have an exchange piece to stitch so don't hold your breath , this is being run by Lainey and as I enjoyed the last one so much I thought I would do it again. I think I have chosen a design for a finish that will take a while , and I cannot show it so I may be a while!!!
Take care all and keep well.
Hugs n stuff
Barb x

yes I did! Welcome back.

I went back and read the last posting. I love all the family photos. Spunds like it was a busy but wonderful gathering. I just love that photo of Oliie and Sam. Sweet. :)

Of course! Glad you're back

Oooh Barb, I suffer from sore hands and wrists now and again and I just have to stop everything till they get better. Lovely wips and I love that TSG finish for your bed. I don't think I have come across this freebie before. I will have to look out for it. Beautiful wips. xx

Sorry to hear you have been unwell. Hope you are well on the way to recovery. Great stitching and finishing as always. Definitely missed you.

Oooh Barb I have missed you! It's lovely to see you back my dear friend. Lovely progress on Sophie and have no idea what your other WIP is!

Love your Spot and your TSG freebie is lovely. I've not seen that one before.

Hope you are feeling much much better now. Sending lots of healing and hugs.

Well Barb, I think I got that cold of yours! Oh boy I need to go to bed and soon!

What lovely stithcing and finishing.

That's such a shame about the plate it would of been gorgeous!

Oh, this has a post now, it was just a title when I commented yesterday. Some lovely stitching there Barb, I thin
k the SB would make a beautiful cushion.
Enjoy the Kings speech!

Welcome back - I missed you. Lovely photos thanks for sharing them. I ordered The Kings Speech from Amazon and we watched it on Sunday evening (again!). Wonderful film. I never tire of watching Colin Firth ... in anything! xx

Welcome back Barb I;m sorry to hear your hands are giving you so much pain. Sophie is so pretty and your two pillow finishes are gorgeous! Shame about Martins pretty plate.
We have 18 people for the Exchange now so it should be fun. Hugs.

I have,welcome back,i have missed your lovely blog and all your interesting news,not to mention your lovely stitching
Love your TSG freebie finish,Sophie is coming on lovely
don't know what your new one is but it looks interesting
Hope those hands and wrists keep behaving
xx

So pleased you are feeling much better.

Lots of beautiful stitching progress as always, you do seem to have the knack of knowing just how to finish things off so beautifully, i guess thats the florist in you knowing what goes with what perfectly

I wont be joining the Wednesday girls tommorrow, off to the pub instead so will do a different night this week LOL

Take it easy with your hands and keep stitching but gently. I have gone through terrible times and taking up bobbinlace helped my hands. I wear special fingerless gloves when it is bad and they do not take the pain away but do help. Have you tried them? They are available through Amazon I know.

And still you have some pretty little finishes to share...tap, tap, tap... Thought a tap dance was appropriate. :-) I have the season spots and have never made them. I should start doing one each season, right?

I am busy in my Elf Workshoppe with two secret projects for my quilt group. I hold a Christmas in July celebration each year and must prepare. So I am quiet on my blog too.

Keep well and think positive. Keep your mind on stitching instead of that pesky pain.

Glad you're starting to feel better Barb, hope it continues.
Lovely finishes, the sunflower button looks perfect, and your little Sampler Girl cushion is gorgeous. Not seen this freebie before, do you know where you got it from please and if it's still available?

Welcome back. Love the photo's !!
I have the dvd of the king speech but I haven't seen it.

Love your two finishes Barb. Such a shame about Martin's plate - it would've been gorgeous. Love the pattern & colours in the scarf. Got the Blu-Ray when we were at the main Tesco - didn't cost us a penny, as we used vouchers. LOL :0)