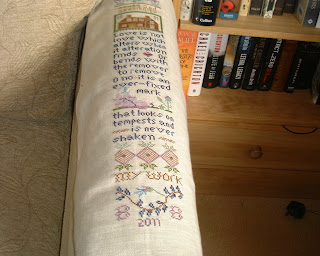 In 1811 Jane Austen wrote Sense and Sensibility -which was then designed by Tanya of the Sampler Girl into this piece- that has been finished by me and now has to be framed.
Tracey gifted me the chart and thankyou so much as I loved stitching it. The years are 1811 and stitched date 2011 exactly 200 years. I have a Sampler Girl thing and love her designs ,so on Needlecraft Haven I have a Wednesday SAL night devoted to Jane Austen and or The Sampler Girl designs. If you want to join us you would be more than welcome.
I have had my 2 new charts come and for now I am calling it a day until I catch up on some of the ones I have. It will be buying threads now I expect ! Well that is the plan anyway.lol 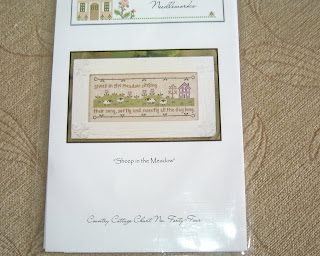 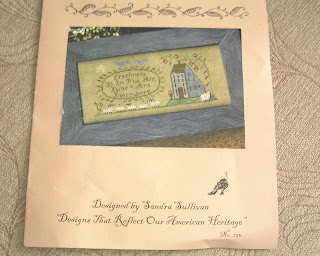 I just had to give in to these as they have sheepies on.

Well I have not a lot of news to tell you ,but we did go to our friends 60th party on Saturday held at an upmarket hotel in Poole.On our way there I espied some little baa lambsies in the fields but we were on a dual carriageway and we couldn't stop for a picture so that is why you have not got a sheep pic to drool over lol. I did take some piccies of the outside of the Hotel, you may even get a glimpse of me ,which in itself is a rare event.
Here is the outside of the hotel. 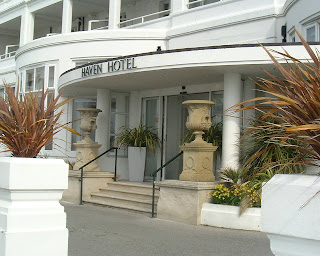 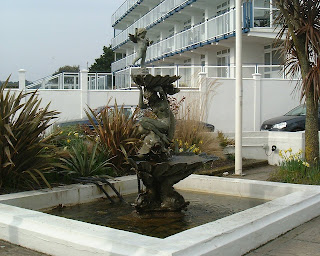 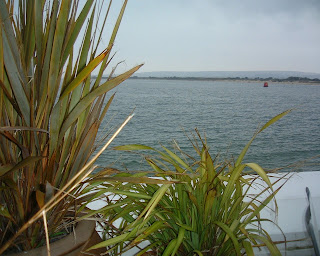 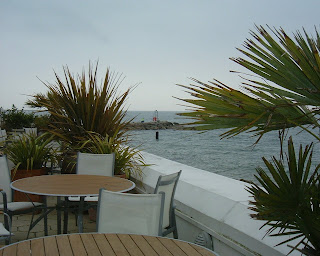 The Hotel overlooks Poole Harbour and Sandbanks, an affulent place on the South Coast with homes here fetching millions of pounds.
Apparently twice a day the ferry to France goes by the Hotel and Celia said it almost looks as if the ship is coming into your room it seems so close.
Well this is just a little catch up as I said not much news.
I am stitching (hopefully) grandchildren allowing ,on the SAL with Colleen and Sally. I think we have decided to have a week at home this week on account of me having to take 4 grandchildren with me. So is it to be The Earth Gatherers or Lucky hmmm still have not decided.
This is where I have got to on Autumn ,N almost finished. 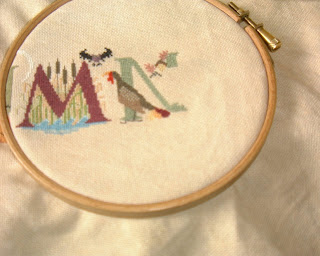 Last -shall I post this - well I did tell you I was pooh bear shaped !!! 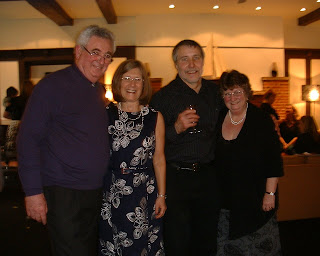 Left to right Martin love of my life,Celia our friend who is 60 today and you would not think she is defying the specialists by being alive ,her daughter is the "girl" at 33 who has just had a heart attack, Norman her hubby and last but not least the me on the right. I am so sorry to inflict that on you! I was in pain there and having a problem standing upright and no it was not the alchohol.
On that note I shall leave you and after the shock of actually showing you a photo of me I will probably be away a while lol.
Take care you all and I will if I may join with you in saying a prayer for all those in Japan, it is unimaginable what they must be having to deal with and I really feel for them. An overwhelming disaster on such a tremendous scale in more ways than one.
Nature can be so cruel.
Bye for now
hugs n stuff
Barb.
at March 14, 2011

Nice to meet you, I love Poole it's about an hours drive from me. Love your stitching.

Love your S&S finish Barb. It is beautiful. I really like the verse on it.

Lovely new stash. I saw that HE one and thought it was gorgeous. I think she's got another sheepy one coming out!

Your Autumn piece is coming along beautifully.

The hotel looks lovely Barb. Lovely scenery. I love the photo of you, Martin and your friends:)

Congratulations on your finish, it is gorgeous. Lovely new stash. Great pictures of the hotel and you, hubby and friends.

Your S&S finish is beautiful Barb, great new stash too.
Its lovely to see a picture of you as well

Happy dance for S&S? It is lovely & congrats on the finish. Like the new stash additions.I too need to hold back on new charts. Need to catch up on some of the new ones. Threads & maybe fabric will be my adds to stash for awhile.
No sheepies? oh dear! How about I stitch one at our SAL tonight?

Beautiful hotel & view. Perfect for a birthday celebration. You & Martin look lovely, thanks for sharing your picture with us.

I'm off to stitching some checkered sheep.
Hugs & xx

Lovely photo Barb - thanks for sharing it with us. Your finish is lovely - I love her designs - well done. xx

Such a lovely looking hotel, you could have been on a tropical island with all those palms!

Super pic of you and your friends, one to treasure, i hope your friend and her daughter both improve healthwise xx

Gorgeous finish, and it seems to have stitched up really quickly too. I found a design by Tanya in my stash when looking for something so might have to tag along with the SAL when the 15 sided whatsit is all done if the organiser of the SAL will allow LOL

Gorgeous finish Barb, looking forward to seeing it framed. Autumn is looking great too. Hotel looks lovely & thanks for sharing your group picture.

Barb, hi,
Your Sense and Sensibility looks absolutely fantastic. Well done for finishing it. What a wonderfully satisfying feeling. I'm so sorry I fell off the Jane Austen SAL wagon after finishing Fancy A Jane Day a few weeks ago but so much seemed to crowd in on me suddenly, I got a bit overwhelmed but I am really keen to get back on and would love you to send me an invitation to Needlecraft Haven. I'm dithering about which one to stitch but will decide today and get started.

It's so nice finally 'meeting' you. You, Martin and your friends look as if you are having a wonderful time. How sad for Celia that her daughter has had a heart attack. i hope she is on the road to recovery.
I went to the Poole Hotel once a very long time ago. It's such a lovely place.

I love your new projects and can't wait to see your progress.
Angela xx

Congrats on finishing Sense and Sensibility, it looks gorgeous.
Thanks for sharing a pic of you all, looks lovely.

Nice interesting post as always Barb,the hotel looks fab,wouldn't mind staying there myself(a long stitchy weekend would be quite nice)
Love your finished S@S,look forward to seeing it framed,whats next???

Wow Barb, you have been sooo busy since I last stopped by... so many gorgeous finishes & WIP's, every one of them a stunner. So glad you enjoyed Christmas (yes, it was that far back) & your birthday & had so many lovely gifts - very much deserved they were too! I have thoroughly enjoyed my catch up... & yes, I have read every single post. :0)

happy anniversary to you both

thanks for sharing your wonderful pictures, it was lovely to finally 'meet you'