A catch up from my little corner of Dorset.

So almost at  the end of March and a  little catch up is  called for.  I hope  to be  doing the  Photo scrap hunt at the end of the week so I must try not to duplicate things.Not once but twice we have  had  snow this month which for us is most unusual. The first time we had freezing  rain too which was interesting to say the least.A thing I  have  never  experienced  and as the rain landed it froze  ,it  made for  crunchy snow   and  a slip slidy surface.  Effie did not  like it  at all.  She did a great Bambi impression.  It only lasted a  day and when we looked out the following morning  it was gone. The next snowfall we had  was  more like snow   and the grandchildren had a snow day from school  and had great fun building  snowmen.
A few pics  of  snow. 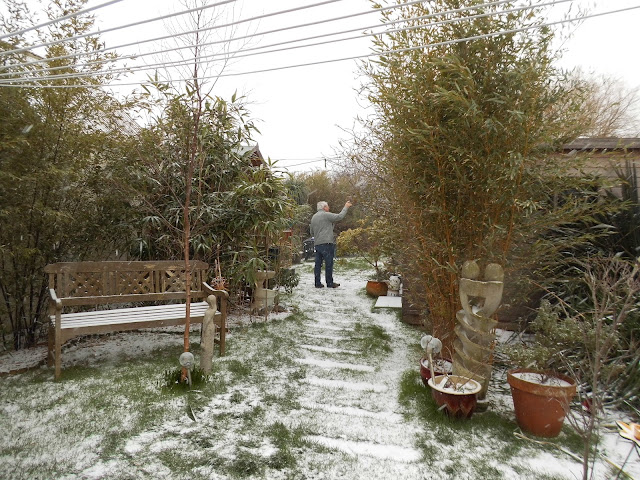 Himself feeding the birds at the start of our first snow fall.Just a sprinkling.
Then the icy snow which Effie did not like at all. 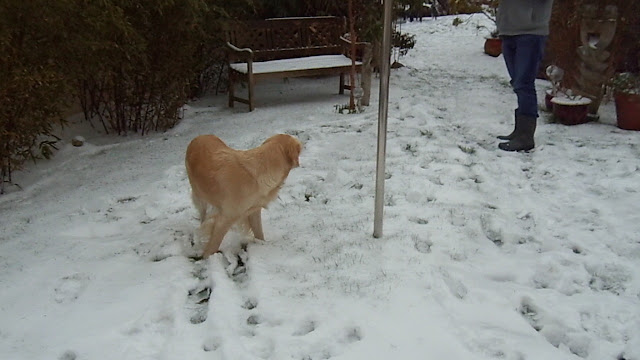 Then we had this. 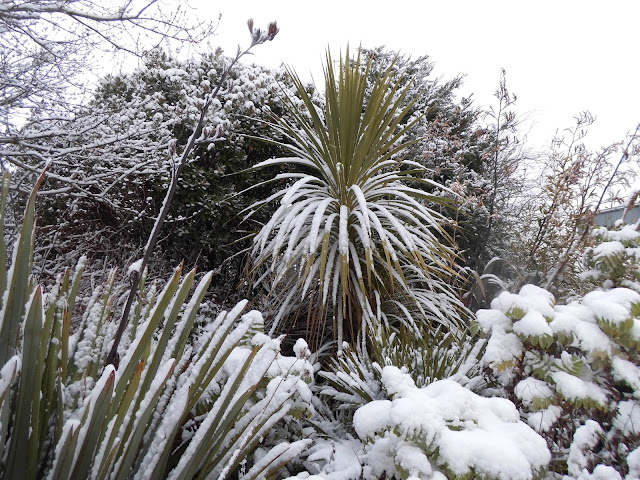 My poor tropical plants , I think some may have been lost we will see.It was a little deeper too this time. 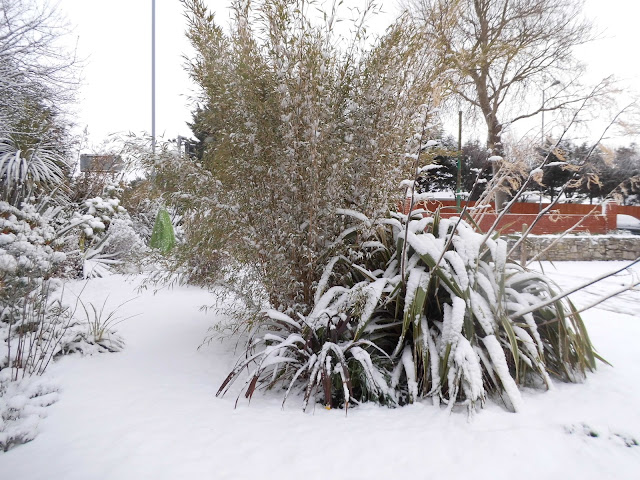 However a certain little lady thought this better to play in. 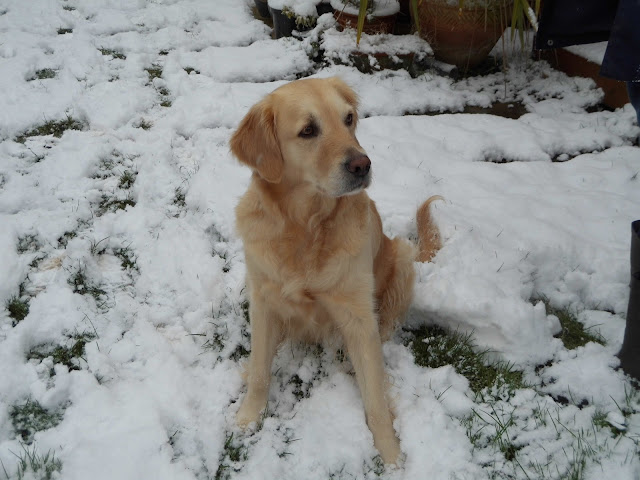 My poor Camilla was not sure. 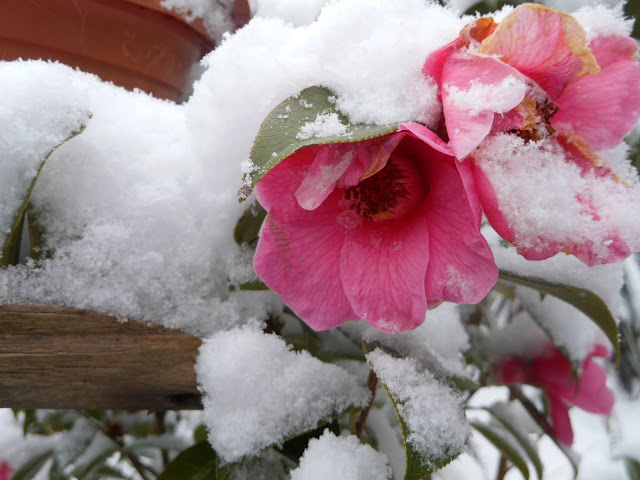 We decided to walk in the fields before it all melted . However look how dark the sky and sea look. 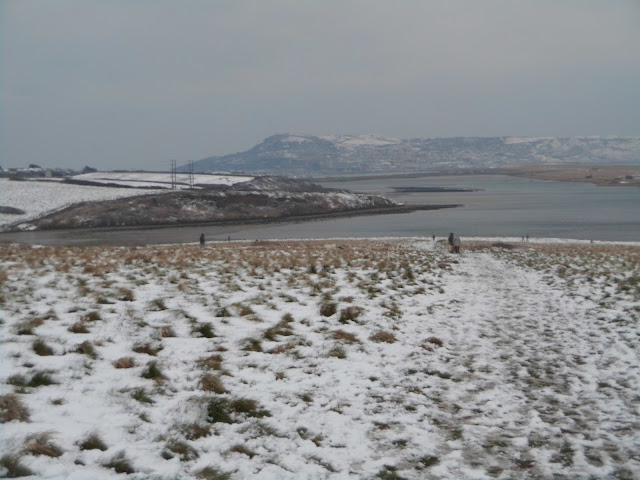 A certain little lady went for her daily dip ,brrr silly girl. I am not sure if the next photo shows the patterns that were made on Chesil Beach,but I will give it a go. 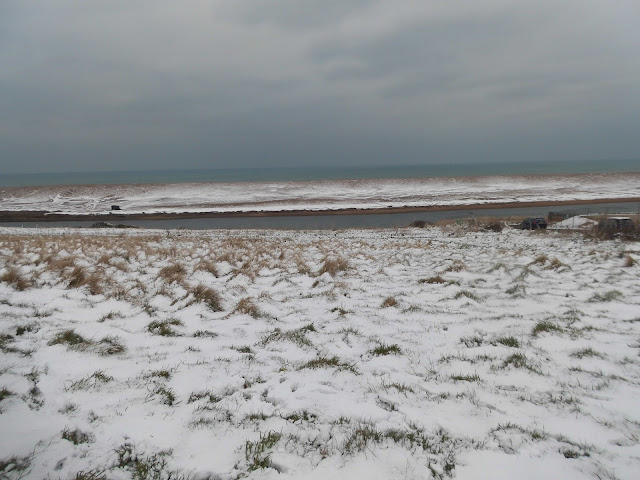 No  that did not work ,oh well.   So that was  our snow  , we will probably be snow free for  years now  .So onto stitching   news. 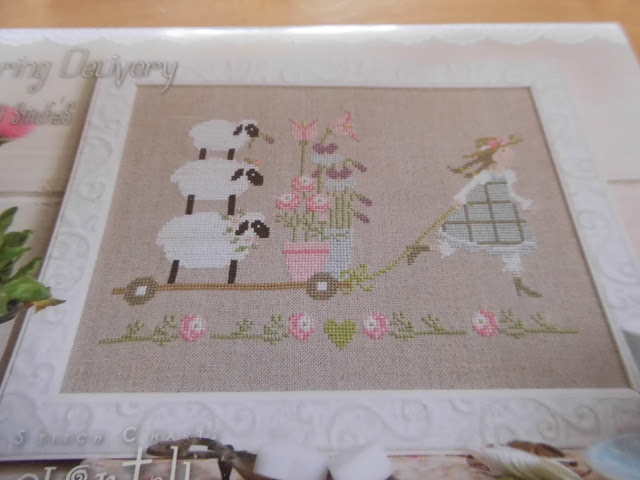 Is this  not the cutest thing, a  new design from Madame  Chantilly ,I am  really looking forward  to stitching this. Then you all  know of Lizzie Kates  retirement , Sally my stitching  friend has  just finished this and I really liked it.She had borrowed it from someone so I thought should I . Asking himself he said  to go  for  it.Not  wanting  to be  told  twice I managed  to get it.  The three little parts of a Little Mystery and the buttons beads  etc. 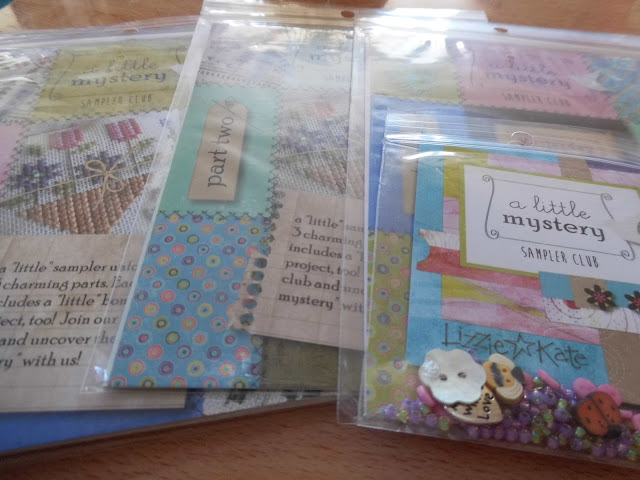 So  that is my purchases stitching  wise, we did pick up  this when we went shopping, I had  wanted to go to the cinema to see it but no one wanted to see it. So of course when  I saw  it ,yep I had to have it.

The other one  was a book,  well  I expect  you have already guessed.  I have just started to read this one. 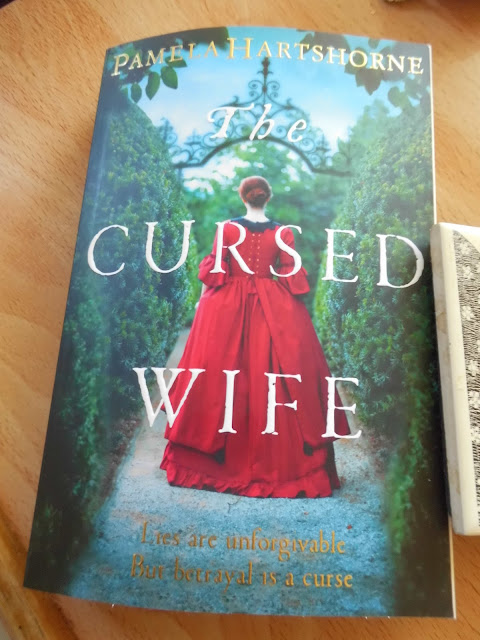 My wips for last week.First my Flower a Day design by Carolyn Manning, I am  stitching this on Tuesday nights  with Lainey.  I do a few flowers usually but not  one a day. 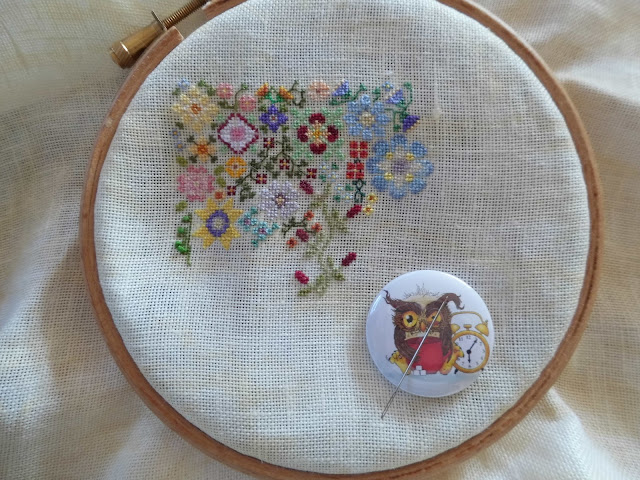 I stitch Lizzie  Kate with Sally ,so I will not show you that till next time as I may just have a finish. The  Prairie Schooler Santa  is  almost  done so again a finish is planned for next time. On Sundays I sal  with Sally and Sue on the Farmhouse series LHN and here is where I am with Horsin' Around. 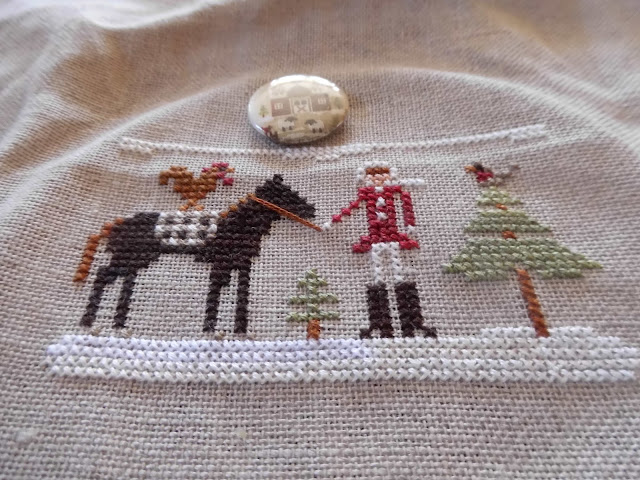 I started a band sampler by Shepherds Bush in the Parlour at Needlecraft Haven last Wednesday I cannot show that as I have not shown the ladies there yet ,so again another next time. The Christmas List is  growing and I am almost two thirds done.
I have got another new addition  .Our cooker of 20 years gave up the ghost and so the insurance company replaced it under the conditions of the contract.  Here is my new cooker. 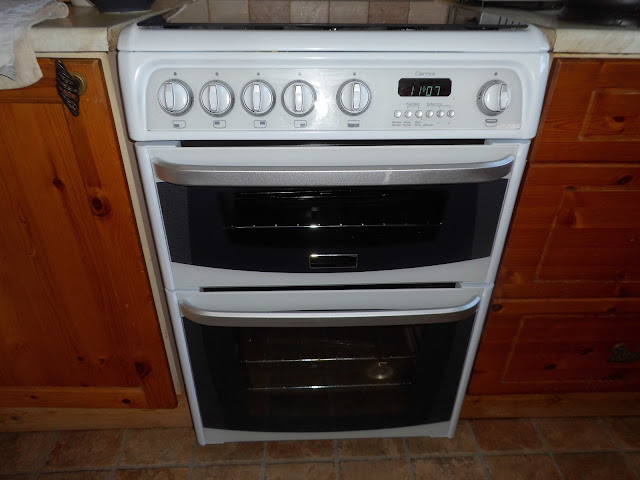 Despite all the snow and cold these little flowers have shown their faces, not sure what they are I planted little bulbs about November time. 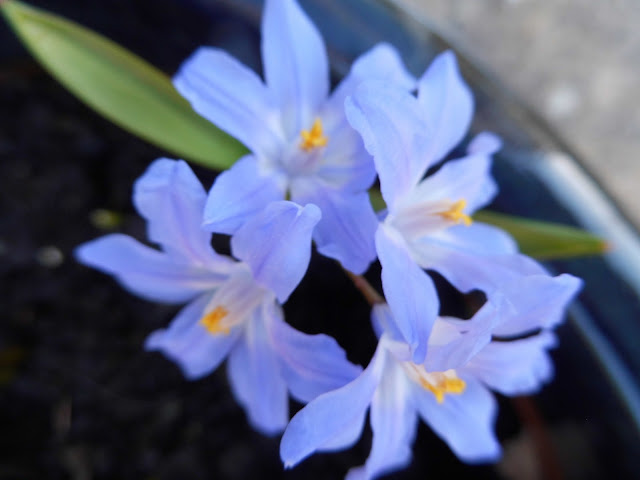 They are in blue ,purple ,white and pink.Very pretty,
We did have a bit of a fright this morning I was in  the shower just before 8,when I heard  the front door open,  Martin had  taken Effie for her morning walk so I was a bit bothered as to what had  happened . Only to find it was Martin back  with her , she had suffered a slight seizure in the fields. Oh no not Ollie all over again as  he had Epilepsy. So Martin took her to the vet as I was still  dripping. He did give her a full examination and took bloods.  She has not been herself all day and not wanting to eat.  The vet phoned with the info there was nothing remarkable in her blood results so we wait and see. Keep your fingers crossed for her.I am now off to play Lizzie Kate. Take care and  thankyou so much for your comments.I do read  them and am really thankful for them. Have a good week and I shall be back hopefully with the scrap challenge.
Love and hugs
Barb.
at March 26, 2018

Love the Madame Chantilly stitch Barb, I might have to treat myself to that. Fingers crossed for Effie hope she stays well. I've just finished reading "The Cursed Wife", not the usual time slip read but I thoroughly enjoyed it.

Your Effie has such a sweet face. What a beautiful area to walk. I could sit there bundled up and enjoy that view for hours. Even with snow.

Oh Barb I hope all will be well with Effie .
She is such a sweetie ,
My little molly use to get little fits and it was always a worry.
Love all your new stash .
And your flower stitching .
Your garden looked like mine , I hope we don't get any more .
We are so late with every thing this year , no tomatoes planted yet I think we will have to buy the plants this year .
Enjoy your week hugs.

How worrying for you, I am sure you are now watching Effie like a hawk .... fingers crossed and healing thoughts coming your way :-)

Oh Barb,i hope the results are good for Effie, lovely new stash, look forward to seeing your progress pictures.we had a lot of snow this year too, hope it doesn't come back for a few years.Take Care xx

Hope Effie is OK & give her a special hug from down under. Your cross stitch is lovely & the snow on the beach quite amazing. Cooling now in our part of the world with a snowfall on Mt. Hotham (in the Victorian Alps) over the weekend, which is a little crazy with our 30+ temperatures of the week just gone. I feel a bit allover the place with seasons (giggle). Take care & see you on the "Hunt".

Hope Effie is well now, what a worry. Your stitching is beautiful and I love your new Mme Chantilly design with the sheep having piggybacks! I've been tempted by lots of Lizzie Kate designs this month, I must have enough now to last a lifetime. But I was still tempted by Sally's mystery SAL!

Lovely stitching and a great selection of pictures. I hope Effie is OK. It's a worry when pets are ill/have a health problem.

Oh no poor Effie, I hope all is well with her and she is soon back to full health and happy in her daily walks.
Madame Chantilly is a pretty one.
Your garden does look like Narnia, I hope your tender plants have survived, roll on spring sunshine and some new growth on them.
Much love and Happy Easter to you both xx

I love how the snow makes everything so pretty!
I hoping Effie is doing better, such a cutie.
Such sweet stitching, the flowers are beautiful.
Have a Blessed Easter!