Well a celebration  of 50 years married. I was 19 he was 21 , seems very young  especially in this  day and age.. We met when I was 15 and he was 18 when I was  16 my parents decided to  move north to be near family up there . We had a break of a year as we thought distance was too  much of an issue.However I had not  bargained on my brother playing cupid. Martin still visited them and when a little while later they decided to  move too  he asked  him to put a word in for  him. Not  sure  if  he would have moved on I did  write and he said he would come  up to see me .Of course  the butterflies were still there  when I saw him  ,and I agreed to  take my holiday with his parents that summer. He asked me to marry him and we got engaged while I was there. We wrote  everyday from then apart from when we managed to  travel the distance by train.No phones or internet then We married on a cold day in March I had 4 bridesmaids and  2 page boys .We caught the train back to Weymouth.About 6  months  later mum and  dad  came back to live down  here.In the same street where they used to live. They did move again about a  year or  so later back  to the north.
We have had 5 moves of  house , but all in Dorset. We have  been here  for 40years now so I think we are settled. So our celebrations  for 50 years of marriage. 2children who we are so proud of and now 5  grandchildren who we love to bits.
Anyway what did we do for our celebration , well last Wednesday we  boarded the train  to London Waterloo travelling  first class. 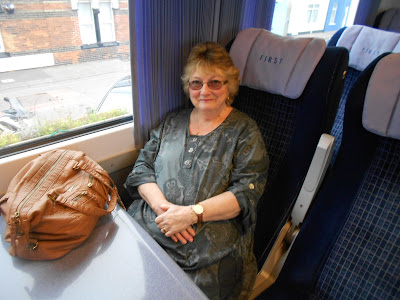 Dreadful photo of me but never mind.Himself takes a better photo than me 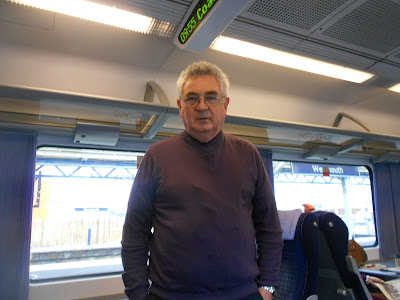 We arrived in London at 1 p.m. and got a taxi to the theatre, it was a beautiful day and  we saw lots on the way. Mind you there is no way I could live there ,so many people rushing with purpose to their various destinations. Here is where we were heading . 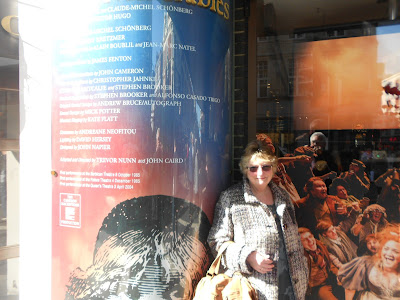 Les Miserables I was so excited. 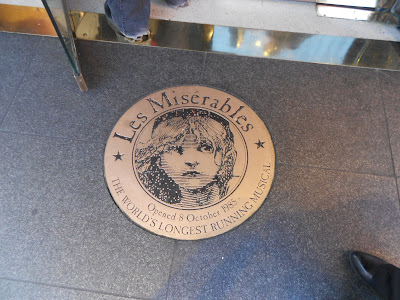 The plaque outdide on the pavement.
Of course we had to have a snack and a drink at the bar before we went in. 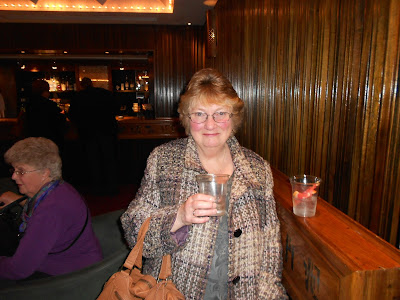 That glass by my side looks as if it has someones false teethe in. It was grapefruit. We then were shown our seats. 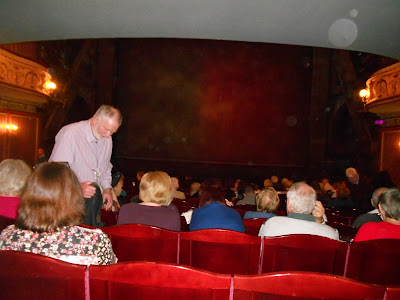 We had a good view  of the stage. 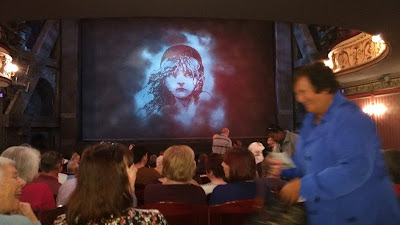 What an experience ,we have never been to a London Show and this was a fabulous 3 hours of entertainment.
Martin bought 2 books  . 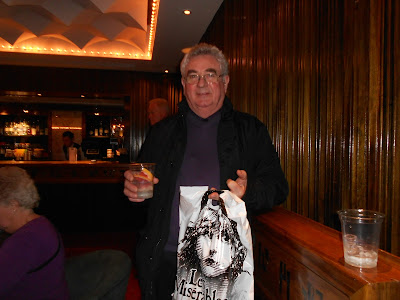 Here is the inside of one of them. 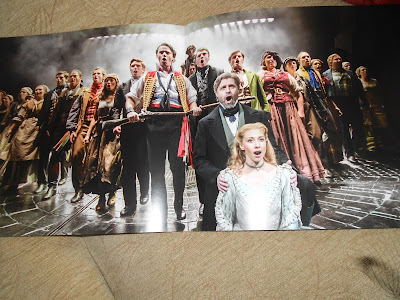 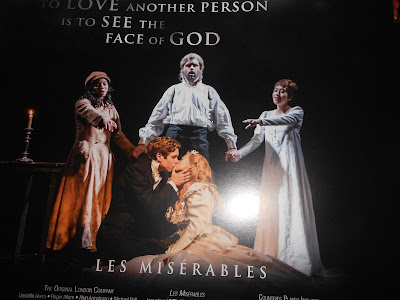 I would see it again tomorrow!!!!!!!!!
We left at 5.30 and as it was rush hour and knowing how long it had taken the taxi to get there due to traffic holdups on the way there ,Martin said shall we go by bike.Having a laugh methinks. He meant it ,but we weren't pedalling. 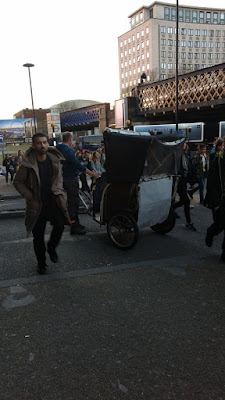 I thought oh well if he wants to thats fine,.  So we climbed in this rickshaw and with some trepidation on my part we set off . Here are some of the views we saw on our way they may be a bit blurred as it was a bit bumpy. We passed Chinatown , we went through it on our way there. 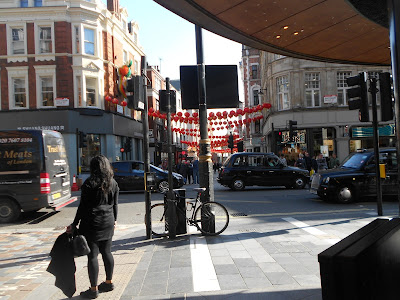 China town was opposite the theatre. Then we saw where the Mousetrap is being shown. 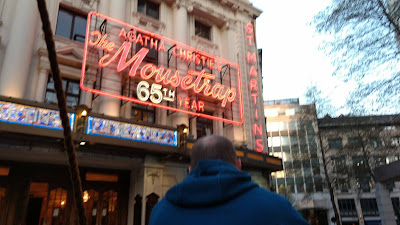 The back of the cyclists head and the Mousetrap sign. 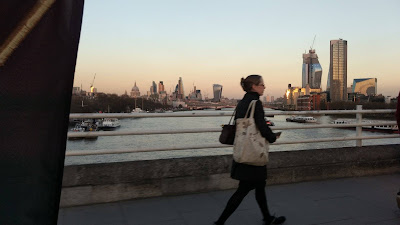 A pedestrian walking across Waterloo Bridge. Dusk and the London Eye. It took us half the time to get back .He must have been shattered.It cost as much as a taxi but it was a first for us to do.Then on Waterloo station and of course I cannot pass a bookshop. 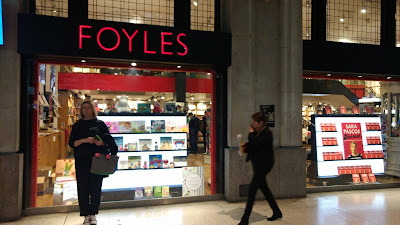 This just happened to jump into my hand. 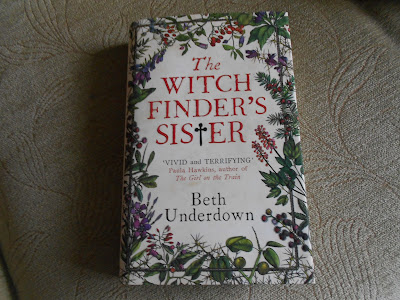 We then had a bite to eat whilst we watched the people scurrying to trains. We caught the 7:30 train home, shame we couldn't stay the night but at the time we booked we still had Ollie. 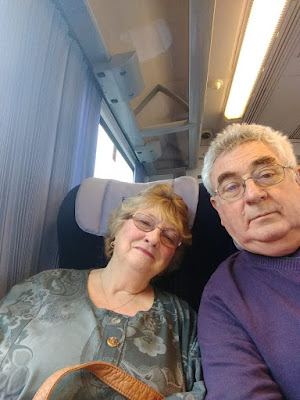 On our way home after a wonderful day,
So that was last Wednesday , then on Saturday the actual day Martin presented me with a beautiful bespoke diamond eternity ring . I bought him a gold watch ,which he said you usually get when you retire to which I replied No chance. lol. In the afternoon we took some friends Martins Mum and Sister (who was one of my 4 bridesmaids.) our daughter Kate and her daughter our grandaughter Caitlin out for a cream tea.
The rest of our family we took out for a curry on Saturday night. So happy times and lots more memories . Have not got many photos of the day itself , Caitlin was busy snapping away and says she is doing us an album. So look forward to that. We had lots of cards and in the evening we had gifts from all the grandchildren chosen themselves. but from  Graeme ,Sue ,Kate and Iain we were presented with this, 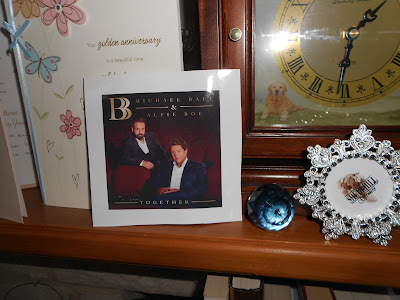 Tickets to see Alfie Boe and Michael Ball  in December , apparently they added an extra night because of demand and it is all sold out. So something else to look forward to. The little frame you see next to it was a present from my dear stitching buddy Sally, so sweet got to find a special photo to go in there. Thanks Sally..For all those who sent cards thankyou so much we were quite overwhelmed.
My old school friend that I have mentioned I meet for coffee on a Wednesday we have been friends since we were 5 ,my goodness  where has that time gone, she and her husband bought us these bookends, she knows our love of books. 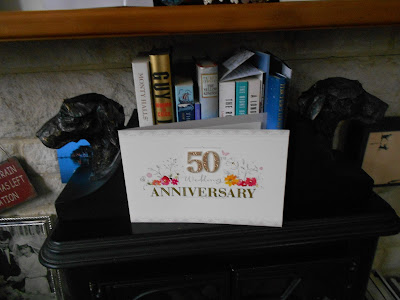 They do have a touch of gold on them. We loved them . So my lovelies all over now, but many more memories and happy times to have and make.

The most recent  photo of us taken on Saturday by Chris one of our dog walking friends.
Here is to many more anniversaries. 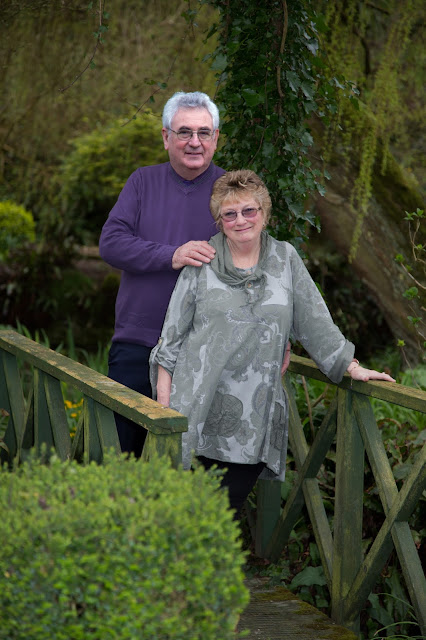 . Will be back soon with the stitching news etc.
Take care ,much love
Barb xx

What a lovely couple you are , Congratulations to both of you.
Looks like you had a wonderful time in London and enjoy many more years to come .
Have a fun week .

Huge congratulations Barb and Martin. It was fun to read about your courtship and how you celebrated your anniversary.

Those are beautiful pictures of you both! Congratulations and Happy Anniversary!!

Wonderful pictures of your special celebrations.
Love to you both xxxx

Oh Barb what a joy this post was! I shared your pictures with my husband. I just loved your story. So very glad you shared it. The last photo is wonderful!!

Barb what an exciting trip to celebrate such a wonderful milestone in your lives. Your day in London was crammed with fun things. I love travelling by train. There is so much to see.
I love your photos. You and Martin look so happy. What wonderful memories you have together. Wishing you very happy times ahead and many more anniversary celebrations.

Happy Anniversary!
It looks as though you had a wonderful celebration

Happy Anniversary! I'm so glad you had a wonderful time and got to celebrate in style. :)

That is a beautiful photo that Chris took of you both last weekend.

Glad you had a good time in London and it's great that you have another trip to look forward to at the end of the year.

Congratulations! Great pictures of you both.

Happy Anniversary and congratulations on 50 years! What a lovely story you have to tell of getting together.... how different courtship was back then - shame the kids today don't have the experience of life and love without phones and other technology!
I am so pleased that you enjoyed Les Mis... it is my absolute favourite stage show - Anytime I hear the song "Bring him home" it brings tears to my eyes. You will enjoy seeing Alfie Boe too :o)
Hears to many more years together xx

Happy Anniversary! It looks like you had a wonderful time celebrating it, and such a great story of how it all came to be.

What a wonderful way to celebrate your very special anniversary! May you be blessed with many more.

Congratulations to you both. It looked like you had a wonderful day, I'm so glad it was last week and not this). The last photo of you two on the bridge is a beautiful photo.

Congratulations to you both. Lovely pictures

Happy Golden Wedding Anniversary! Sounds like you had a wonderful weekend. My parents were married in 1965 after meeting at school and staying in touch afterwards. They often go to London to see the opera, ballet or shows. It's nice for them to finally be able to treat themselves after bringing up three children on a budget!

Congratulations to your Golden Wedding Anniversary. And you celebrated it in a great way.

I am so happy that you had a wonderful time celebrating your Golden wedding anniversary. Lovely too see photos of you and love the one of you and Martin that your friend took. So glad you like the little frame.

Hope my emails are getting through. I'm not sure if the Windows Mail app on the laptop is working as it should!

Congratulations on 50 years!! I was 21 when I married and how right you are, seems so young, I think we were more mature as 21 years olds way back when! Lovely photo of you and your husband on the bridge, you certainly don't look old enough to be married for 50 years!!!