Outings and a birthday

Hello all, I  have had a super  week, having  a birthday last Wednesday and just going out locally, I do not have a lot of stitching news so that will come next time. On Tuesday it was theValentine sock exchange at NeedlecraftHaven,here are the socks I had  from Tina. We had to send 2 threads which picked up the colour of the socks. 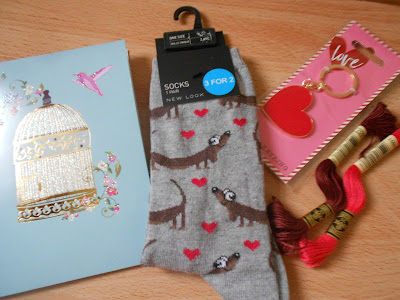 I loved these as the week before I found a jumper I liked and guess what was on  it. 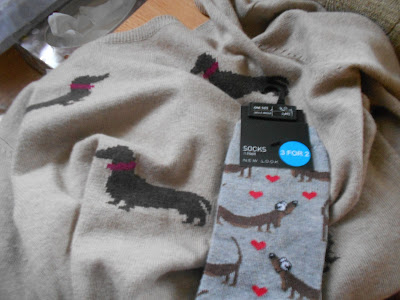 Yes, what a coincidence that was
On Wednesday last I celebrated a birthday ,now I am going backwards as the next one will be  a  O one and I shall be up to my three score and ten. How did that happen  I ask myself,. I  would like to thank all  of you who sent good wishes, parcels and  so  many goodies.Here is a pic of all those lovely things I had. 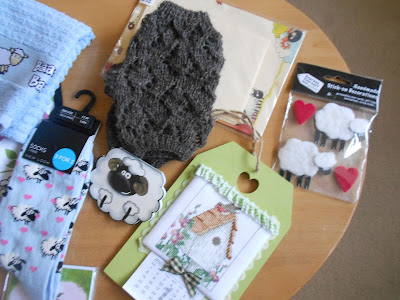 Lots sheepie things. Miss Julie knitted me the fingerless mitts they are so warm and beautifully knitted with lots little items added to the parcel,thankyou so much my friend.  . From June came the lovely hanging.This is  the front. 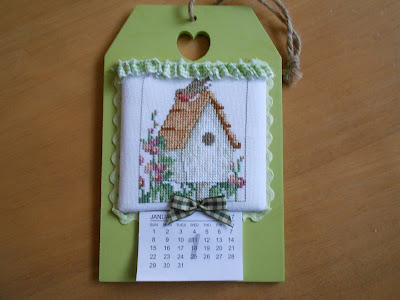 Here is the back,such an  original and lovely idea. 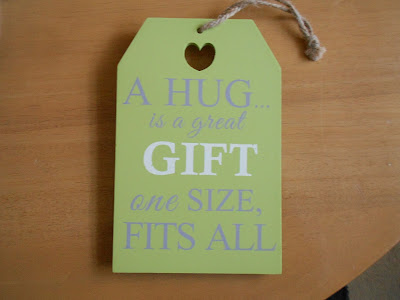 Being  June she included sheepie things  too. Loved the peg bag. I am just so lucky. 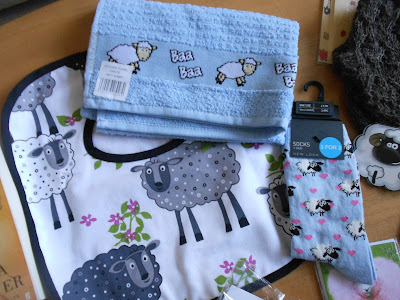 My friend Clare who runs Needlecraft Haven sent me this book to enjoy. I wondered when the postman knocked what it could be as I knew I had not ordered anything. I am sure I will be reading this one soon. 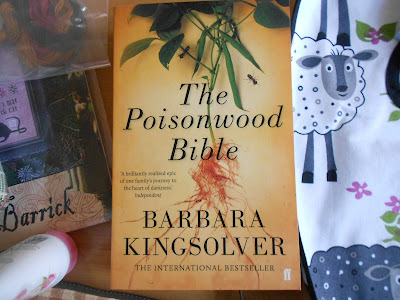 Tina sent me this , you may remember we do a Halloween exchange and my witchy friend from  the midlands sent me this , which I have been drooling over  for  some time. 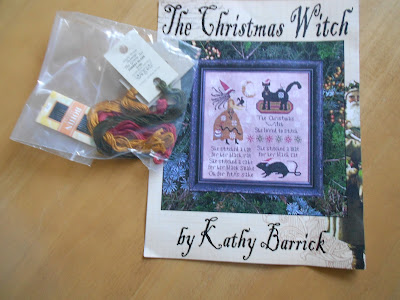 I cannot wait to start this one. She sent me some Bohin needles to try , also the special threads to stitch it with.
Angela my birthday twin sent me lots of sheepie goodies including some rather nice sheep notepaper which she had found. Christine was her usual crafty self and made me a bag,which will  be so useful. 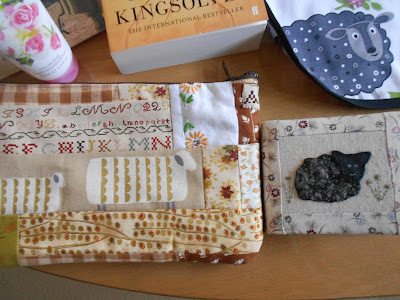 More sheep. Last but not least  my friend Sally sent me this gorgeous stitchery . It is so pretty, All sides are different and I am  thrilled with it.Thanks Sally. 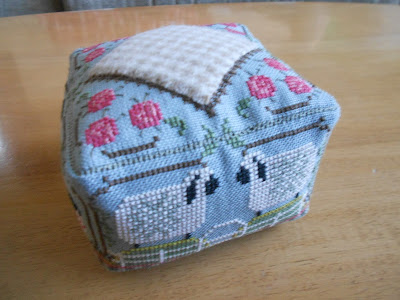 The grandchildren Sam and Alfie came over with daughter Kate in  the morning  with more gifts ,one of which was this. 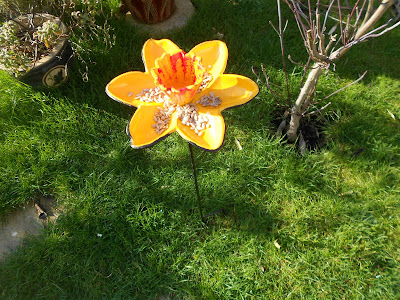 We met our Son Graeme and his wife Sue here. 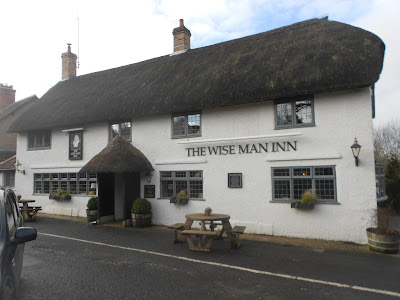 This is just outside Dorchester , the food was absolutely gorgeous, and the scales told it this week!! 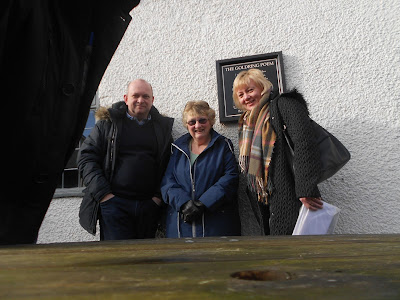 Then Catherine came over with Caitlin in the evening so a busy day. Here is my other "child". 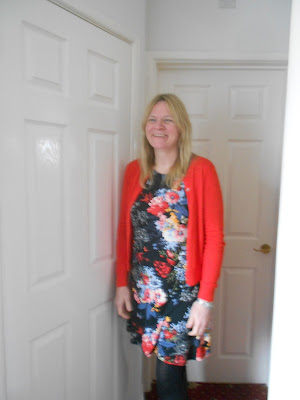 A shadow of her former self  having lost 5 stone!!!! So proud of her.
The next day we decided to go for a  walk , we went over to Chesil Cove armed with a flask of homemade soup. We sat on the beach and watched the waves. 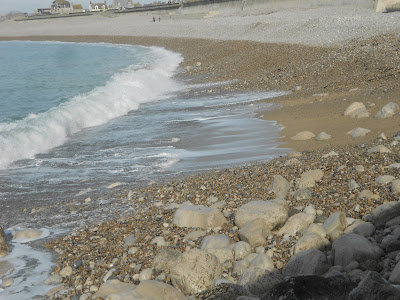 It was so nice to sit and just be. The view from where we were. 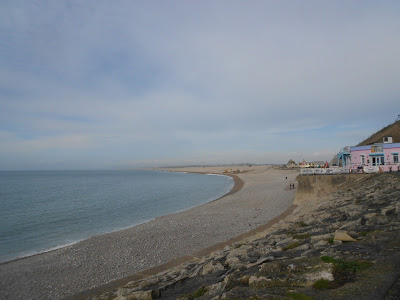 So that was Thursday. On Friday we  decided to visit the County town of Dorset which is Dorchester. We started off by the Roman Wall that is still standing. 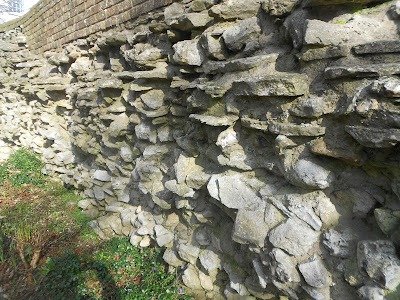 We crossed the road and here is a statue of Thomas Hardy ,who wrote and lived here in Dorset. 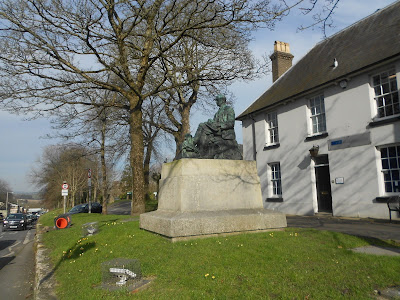 We then walked to the Roman town house, This floor was incredible ,to have survived for all those years. 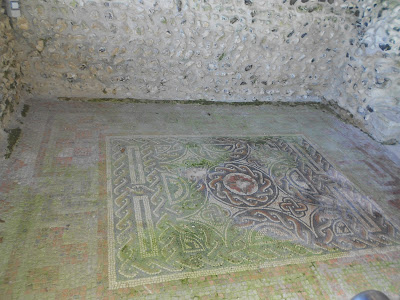 All those little mosiac  tiles. Just so incredible. We walked round here, and then we walked to the river . Here is Hangmans cottage. 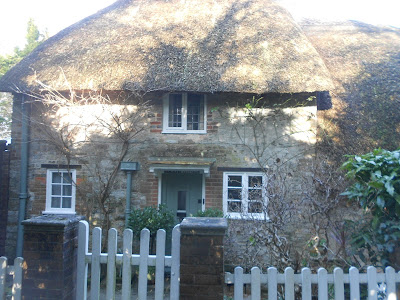 It really was the Hangmans Cottage ,it was quite large and it said his ropes were kept under the  eaves. In the garden was this shepherds hut that was home  to chickens. 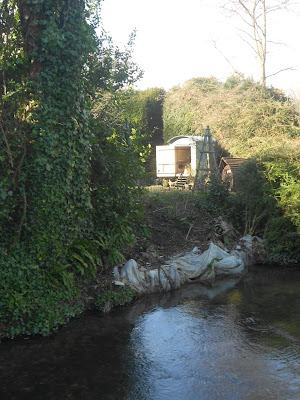 There is so much history in this town. The infamous Judge Jeffries who kept the Hangman  busy. In
1685 he was made Lord Chancellor,in the same year he was sent  to deal with the Kings rebellious subjects in the West Country. He took up  Residence in the building shown  below. 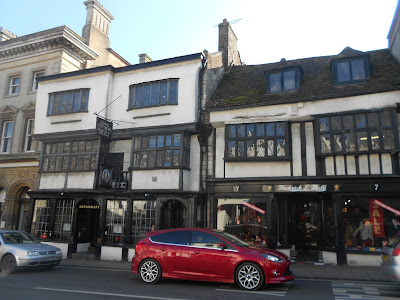 This is now  a restaurant. The uprising known  as the Monmouth Rebellion, was defeated  by the Kings troops, the trials known as the bloody assizes were held in the Oak rooms  of the nearby Antelope Hotel. He handed down  death sentences for 251 rebels. Only 74 of these sentences  were carried out ,but the brutality the executions will live long in the memory of Dorchester. As was  traditional  for  those convicted of treason the  condemed men were  hung drawn and quartered and  their heads were displayed on spikes in Dorchester. The remaining rebels  were transported to the West Indies.The county museum is reported to be  haunted by his ghost.
On  the way home we passed this garden of snowdrops. 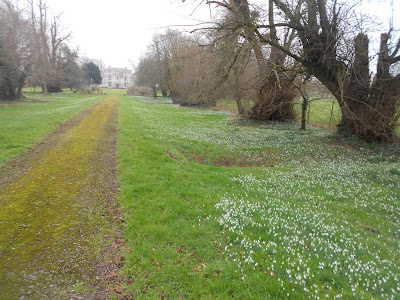 I love seeing these sweet flowers at this time of year. We have some pretty violets out in  the garden , speaking of  which guess what appeared in the garden over the weekend. 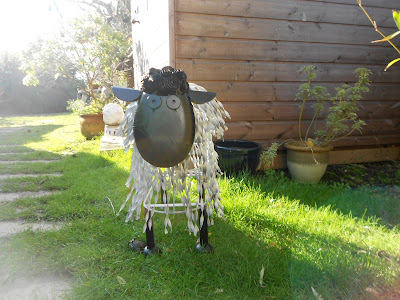 I got  home  on Saturday to this addition to the family. She is  metal and is great. Martin  apparently ordered it  for  Christmas but they were out of stock . A lovely post birthday gift from himself.
I had a knitting pattern arrive this week with a note from Graeme he  wants a hat.. So I ordered the wool , which was packaged nicely and started knitting his hat. It is American wool sold by The Wool Warehouse and it seems strange having long balls of wool. 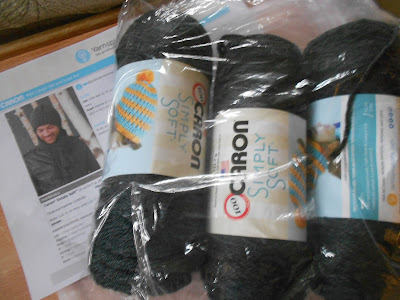 He will be having a scarf too. I have done a little stitching but not  enough to show this time , apart from this little one I started in the parlour. 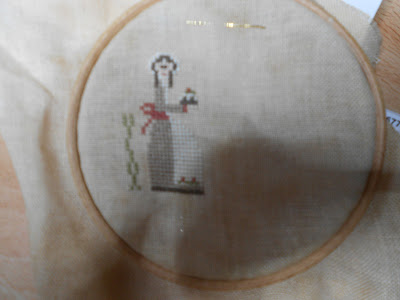 This is Welcome  Inn by LHN. Now for books  here are the ones I have this week , I did pick up a couple for  50p each  but that photo will be next time as I have not taken pics yet. 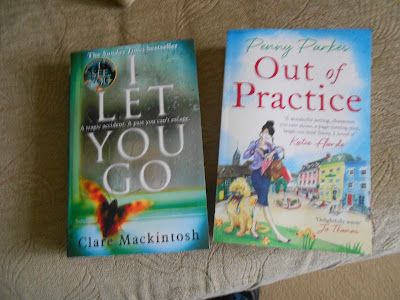 So my friends hope my ramblings  weren't too much of a history lesson for  you . I  needed to write it all down before I forgot. I may have  a little  more to share with you next week ,depending on weather etc. Take care all and if you have a  minute leave me a little comment.  Thanks bigtime for all of those who have left a note these last few times.Hugs.
Barb

ooOoo Barb! Such fabulous gifts! And so many! :D Good for you dear! Thank you for sharing your sights with us.


What a wonderful post Barb, hope you had a fab Birthday I am sure you did.
Lots of lovely gifts love what Sally made for you and the fab gloves from Julie .
Love the Sheep your DH brought you too.
Lovely photo's and history loved it all.

Lots of lovely things in this post :-)
Lovely birthday gifts, and the sock exchange was fun wasn't it?
Thank you for mine, they are really cosy :-)

A treat to read your news and see the lovely places you have visited and beautiful handcrafted gifts you received. Kate looks stunning! A great pic of you with G & S too. Love the new sheepie addition to the garden. The sound of the sea on Chesil beach coming up the shingle..... bliss.
love and {hugs} x

Happy birthday Barb! It looks like you had a wonderful time, what a beautiful part of the world you live in.
Lovely gifts too!

Oh what a lovely birthday, such great gifts ... I hope you enjoy the book. What a thing with your socks matching your jumper, perfect.

I have fond memories of Dorchester, Dad and I used to shop there when on scout camp each summer at Came Wood. We always had a coffee in The Horse with the Red Umbrella - I don't know if it's still there - on the left as you go up the hill if I remember right.

I'm glad you had such a lovely birthday Barb, and you certainly got some wonderful gifts.
The stitched cube Sally made for you is stunning and I love the metal sheep sculpture

Looks like you had a fabulous birthday with lots of lovely gifts too. I enjoyed the trip around Dorchester. We did visit a few years back but only went to Hardys Cottage and not around the town itself.

So glad you had a lovely birthday, lovely gifts received, love your new addition for the garden, I hope he helps to keep the grass short, more books lol, your library will be asking to borrow your collection lol
Hugs x

Such wonderful gifts for your birthday and from this great exchange, Barb. And great pictures from your outings. It seems that spring is on its way in your region.

You had a lovely birthday, Barb and received a beautiful selection of gifts.

Lots of lovely gifts for a very special lady.

Lovely photos from your trip out.

Love your new sheep for the garden!