A little bit of everything ....March is here.

Hello on this rainy grey morning the start of March. As I look out of the window it is pouring and windy , not a nice day for walking the dog. Hence the blog post as I am not venturing far in  this weather.

I do have bits and bobs to show you as I have had some purchases and I have not told  you about a couple of gifts I had for my birthday and would hate anyone to think they had not been mentioned. So shall I start with gifts . 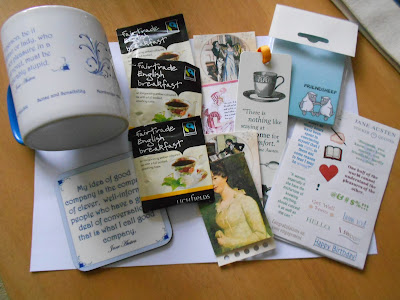 This was a birthday gift from my birthday twin Angela , we both try and find something Jane Austen related and this year we both sent each other the same thing , Yes I did say she was my birthday twin, I loved it all of course , in fact I almost ordered 2 so I could have one,  unbeknown to me that she had bought me the mug and coaster as well . She also told me a little news and I know she will not mind me sharing her sister Rula is hopefully going to appear on Pointless the quiz game ,she also loves Jane Austen ,filming takes place next week. I do hope she makes it. The bookmark you can see is snugly fitted into my latest read. 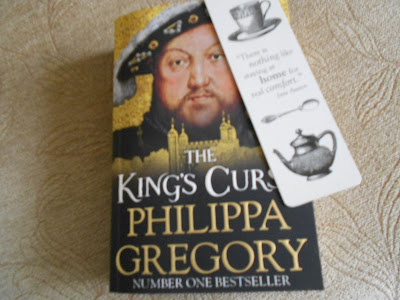 There is nothing like  a good read and a cup of tea to accompany it.  I also bought the next book which follows on from  this I think. 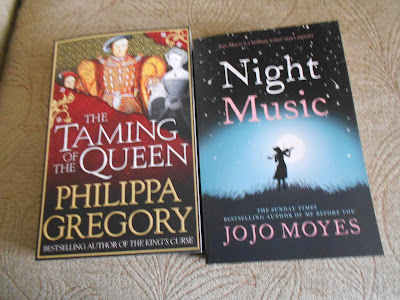 Staying on the subject of books , I am a sucker for a nice cover and saw this one and thought hmmm I like the look of that,does anyone else sometimes judge a book by  its  cover. 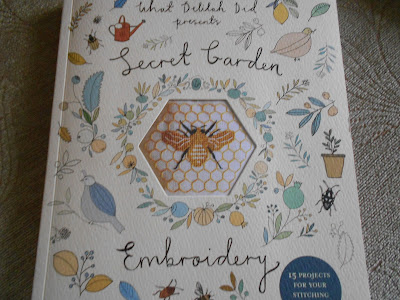 There are a few things I would like to stitch in it . So now onto stitching from Clare I received a voucher for Sew and So ,which I will use when they reopen. Thanks Clare so sweet of you , hmm I think it may go toward some fabric. My dear mil gave me a cheque , in one of her lucid moments she remembered my birthday and so I was able to buy some embroidery fabric ,yes I am going to be doing some embroidery ,just don't ask when lol. 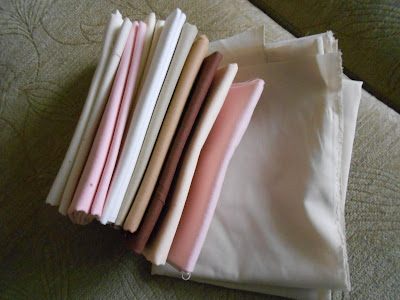 I have plans. Mother in law has been very poorly and it has and still is to some extent,been a very worrying time ,she is now out of hospital and respite but despite wanting to be in her own home is not being very cooperative with the carers going in. We wait and see.
A few finishes to show you ,friends from  Needlecraft Haven will have seen these as they are January and February finishes.
January Christine gave us this chart to make into something. I decided to use the chart to do the front and back of an ornament. 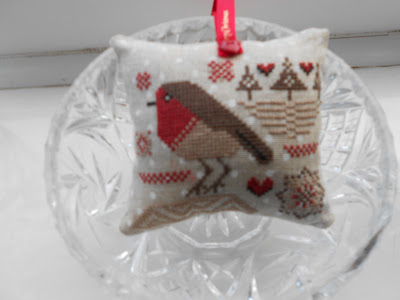 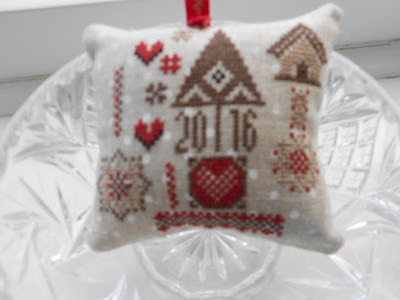 Back /Front whichever. I really enjoyed this one ,Then last Sunday was reveal day for February ,which I managed to finish on Sunday. Another monthly challenge  piece chosen by Christine. I think she has kept me sane the last couple of months doing these. Along with Sally SAL.we  do. 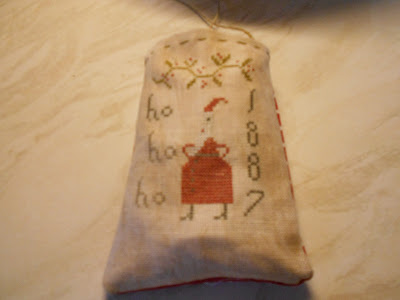 I made this into a little bag to hold Christmas foliage ,it has a plastic pot inside to hold water ,I thought I had taken one with the foliage in it but do not seem to have saved it. Oh well,you get the idea. Over at Needlecraft Haven there is so  much going on  ,come and join us you will be glad you did. On Wednesdays I open the parlour and we stitch on Little House needlework charts and Country Cottage charts. Hence it is named the little house in the country ,sal in the parlour night. I recently had a finish ,By the light of the Moon. 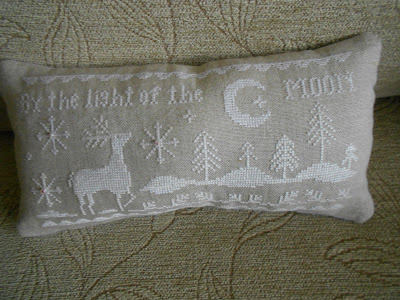 Last week I started Welcome Spring a gift from Carin. 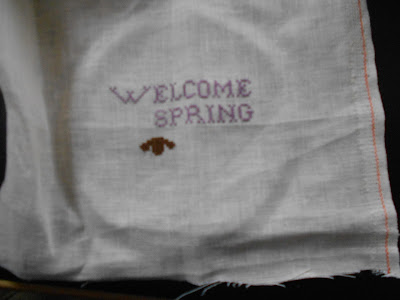 Which I might add I hope is just around the corner. Another night I stitch with Miss Julie and here is progress made over one on my Prairie Santa. 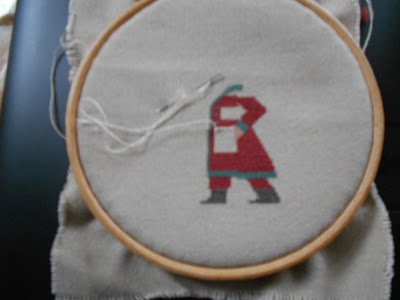 Next on to Sallys sal nights . Mondays in February saw a finish of the Gold Crown by Rosewood Manor in the Christmas ornament edition of JCS,2014. 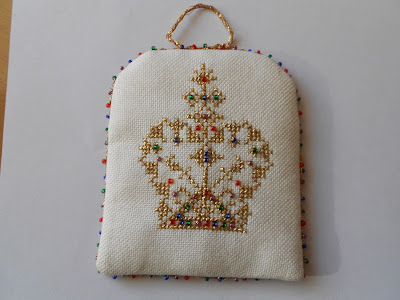 We have an exhibition this year in June and this year the theme is Royalty, I thought I would kill 2 birds with one stone.It really sparkles . I think I may have to look for other charts I can use on that theme ,Any ideas would be welcome. Maybe Queen Bee. So I have another christmas ornament to stitch with Sally starting next Monday. We are also stitching a sheepy design on Fridays , Sally altered Miss Violets dress to a darker violet ,and I am beginning to wish I had too as it looks a bit wishy washy. I will persevere though. Not much has been done on her yet , I think hospital and home visiting ,also giving Mums house a thorough clean has taken its toll on my stitching time.
I did do a little blackwork on Sunday evening and finished another block.Only another 125 to go lol. 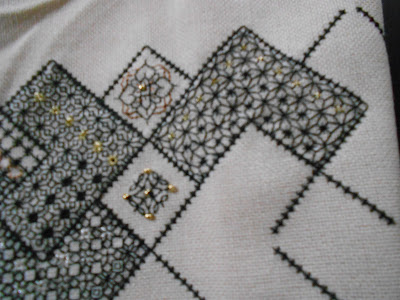 Sorry it is a bit blurred ,I will have to have more lessons. The block done was the one on the right.It tried my patience just a little as I just could not fathom our where I was. So onto number 8 which I hope to show you next time.I cannot remember if I showed you the Be an Elf design I stitched for January with Sally from the JCS Christmas 2014. Over one it is a small one. 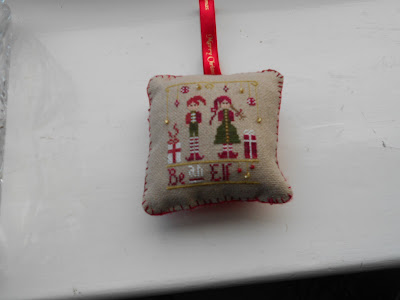 I think that is all I have to share with you today, oh forgot to say we had a visit from Oakley the other evening here he is at 10 weeks old weighing in at 19 lbs. 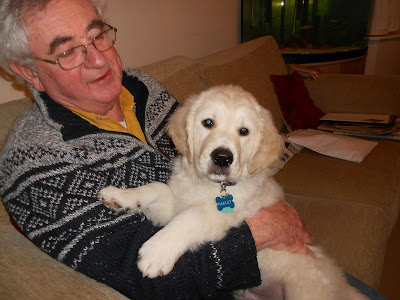 I think someone was rather taken with him, Or maybe it was 2 someones ,Ollie was not impressed. On that note I will wish you all a happy eventful week , If  I get back to you again this month ,I will try, otherwise keep well and for all who are catching the dreaded winter cold , get better soon. I just hope for a stressful free month ,
Much love
Barb xx
at March 01, 2016

Oh such lovely pieces you have completed Barb, despite much of your time being taken up lately.
I saw that puppy and thought you two gave in and did it. ;)He is adorable.

Lovely stitching Barb and isn't Oakley gorgeous. Hope your mother in law improves, she must be a worry for you. x

lovely post, love your gifts and your stash and books .
Wonderful stitching , love all the ornaments .

Such a worry when family are unwell , hope you get some time to yourself .

What a lovely puppy I love dogs I would have another tomorrow but my DH wants to be pet free now , after
a lifetime of pets , and the upset when they go.

Have a good week hugs.

You sure been busy, lovely finishes and fabrics as well as books you've bought.
Happy week!

So much lovely stitching and gifties! You have gotten a lot accomplished. Yes, I would buy that beautiful book just for the cover! Cant wait to see your embroideries, Barb!

A lovely post Barb - I look forward to reading about your purchase later in the year, lovely fabric and great books. Your stitching is always so lovely and your finishing is beautiful x x

Great stitching barb. I love your finishing idea for the February challenge (you did take a picture with foliage, because you sent it to me, it's the one in the album so you could download it back from there if you wanted)

Lovely stitching and gifts. Oakley is gorgeous. I'd like to give him a home :)

Lovely finishes and wips.love the puppy so cute! Xx

What a lovely post Barb. So much going on. Even now, seeing the Jane Austen twin gifts we exchanged, I can't help but laugh. I'm so glad neither of us went ahead with our original plans to buy ourselves a set too :-)
You have stitched some lovely things. The blingy crown is gorgeous and your black work is really impressive. It's such detailed work. You are so busy but still find time to complete such lovely stitches and contemplate some embroidery too. I definitely would have been tempted by such an attractive looking embroidery book.
I so wish I could join you in some of the exciting SAL's. There's nothing nicer than stitching together with friends but until I have finished stitching all the wedding favours, sampler and gifts for our son's wedding I really can't focus on anything else.
What with a son getting married later in the year and a daughter appearing on Pointless in the next few days, it's never a dull moment in our house :-)

You have some lovely finishes to show, Barb! Gifts too! I love to see what people are reading ~ you have some great books there. :) And yes I have been known to buy a book based on its cover. Sometimes a good thing and sometimes a bad thing. Oakley is adorable...I can see how you might be taken with him.

What a lovely post Barb. Lots of lovely stitching. I do love your ornaments. I'm doing a blog post now so my finish will be up and my new start too soon.

You have some beautiful gifts there. Looking forward to seeing your embroidery when you start it.

Your blackwork is so pretty.Love your WIPs. Must stitch Welcome Spring. It might be my next start in the parlour of I ever finish Countdown to Christmas!

You have been busy, even with MIL duties.
Christine really does manage to find some lovely freebie designs each month. It's nice to have someone to SAL with too.
Good work on finish-finishing them as well.