Yes ,this year 2015, is the Chinese year of the Sheep. So of course  this post had to feature the sheep. Today I was meant to do a workshop making a needlefelt sheep. It was booked for last weekend but the tutor couldn't make it so  it was re-scheduled for today. Yesterday the owner of the shop phoned to say it wouldn't be taking  place as there were only 2 of us and the other lady had phoned to say she had a virus and couldn't make it. So not to be outdone I got my basket of fleece and a book and wallah!!!Here is my strange looking sheep. 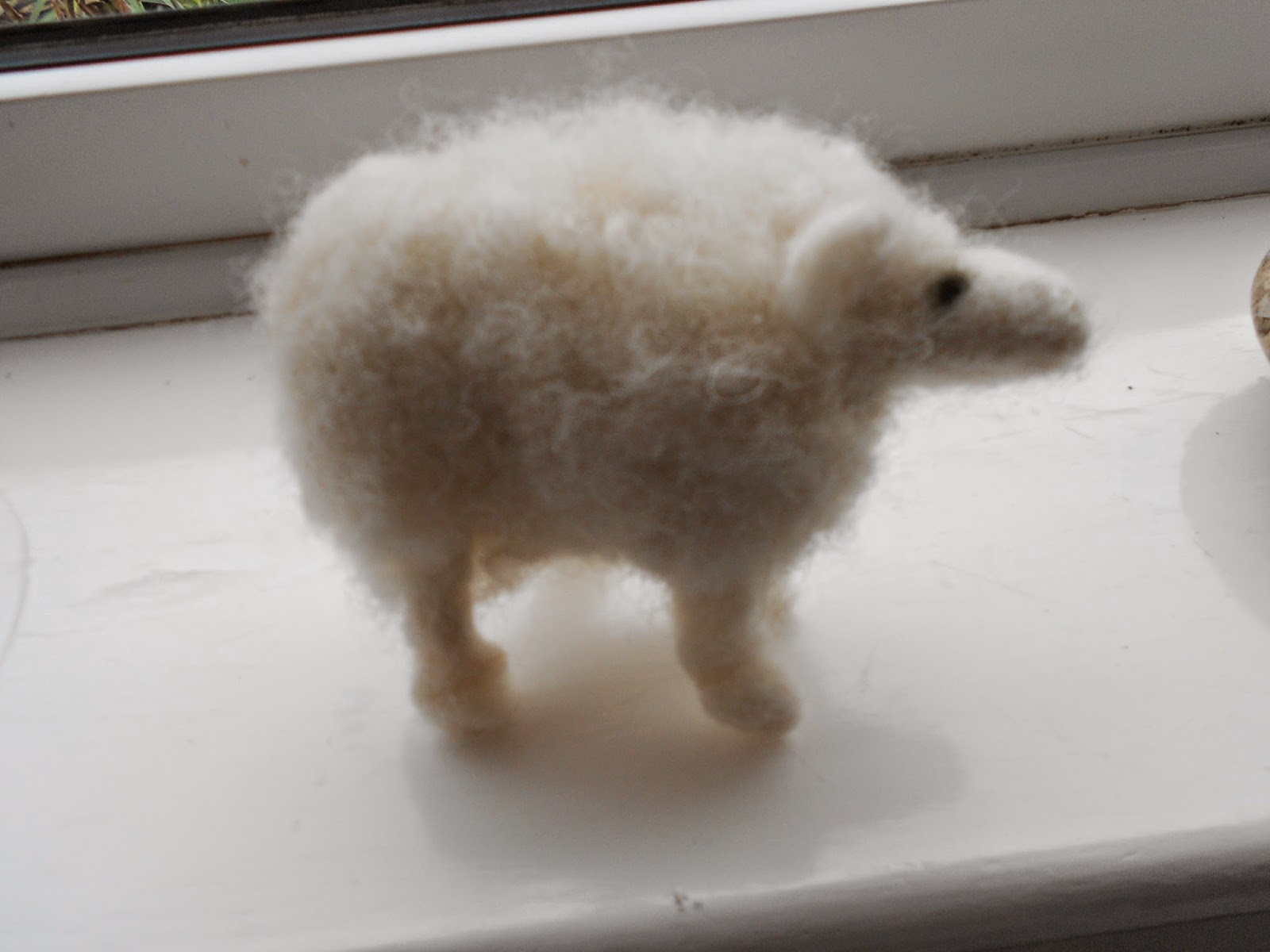 I don't think I have his face quite right, However I did it and also found his friend Humphrey. 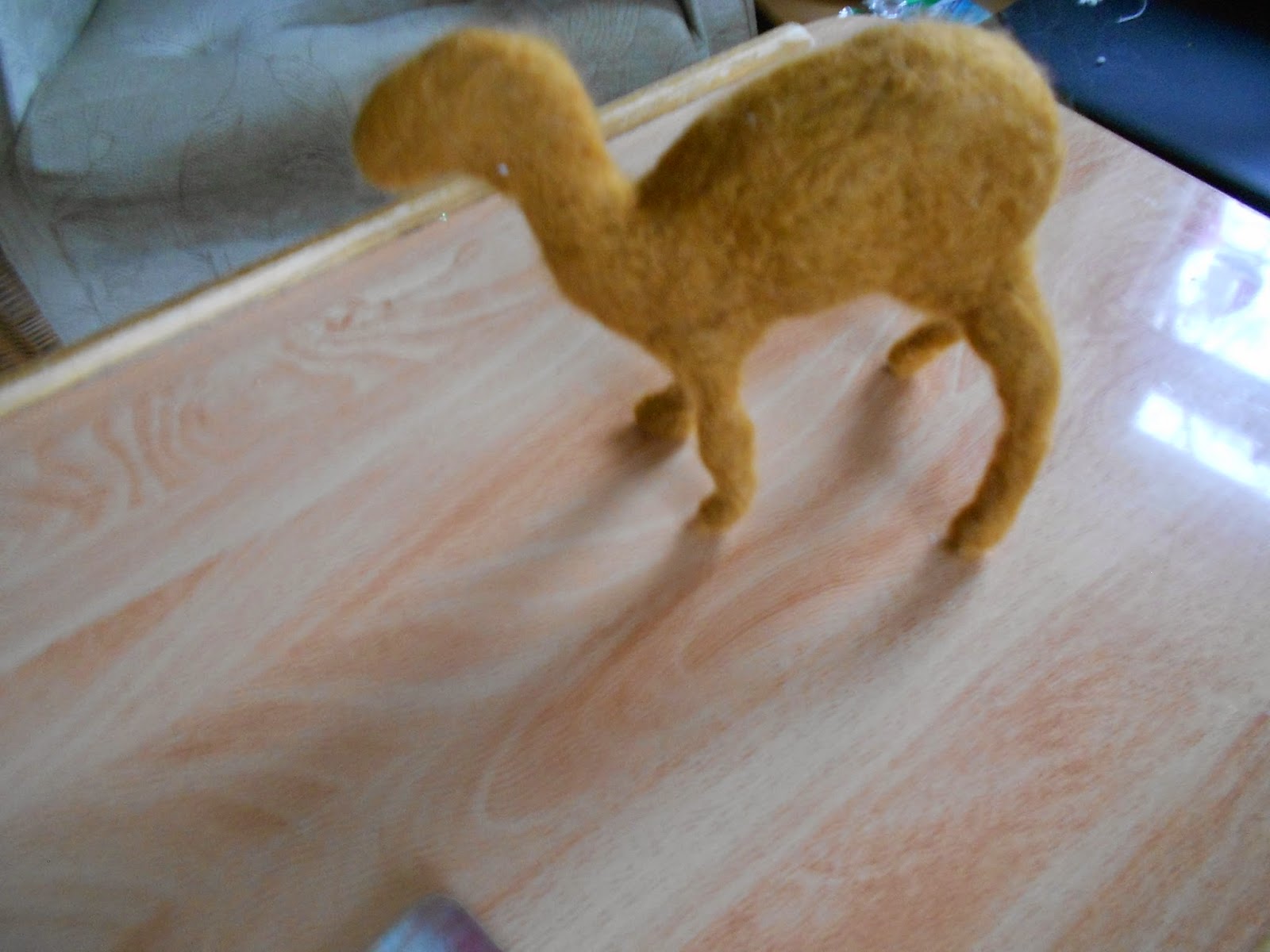 He still has to have a tail and some ears,I  will  embroider him a blanket at some  point,So I suppose Camille is the first finish of the Year of the Sheep. I think I told you I had finished Tricitone that I stitched along with Sally ,so here it is on a new knitting bag. 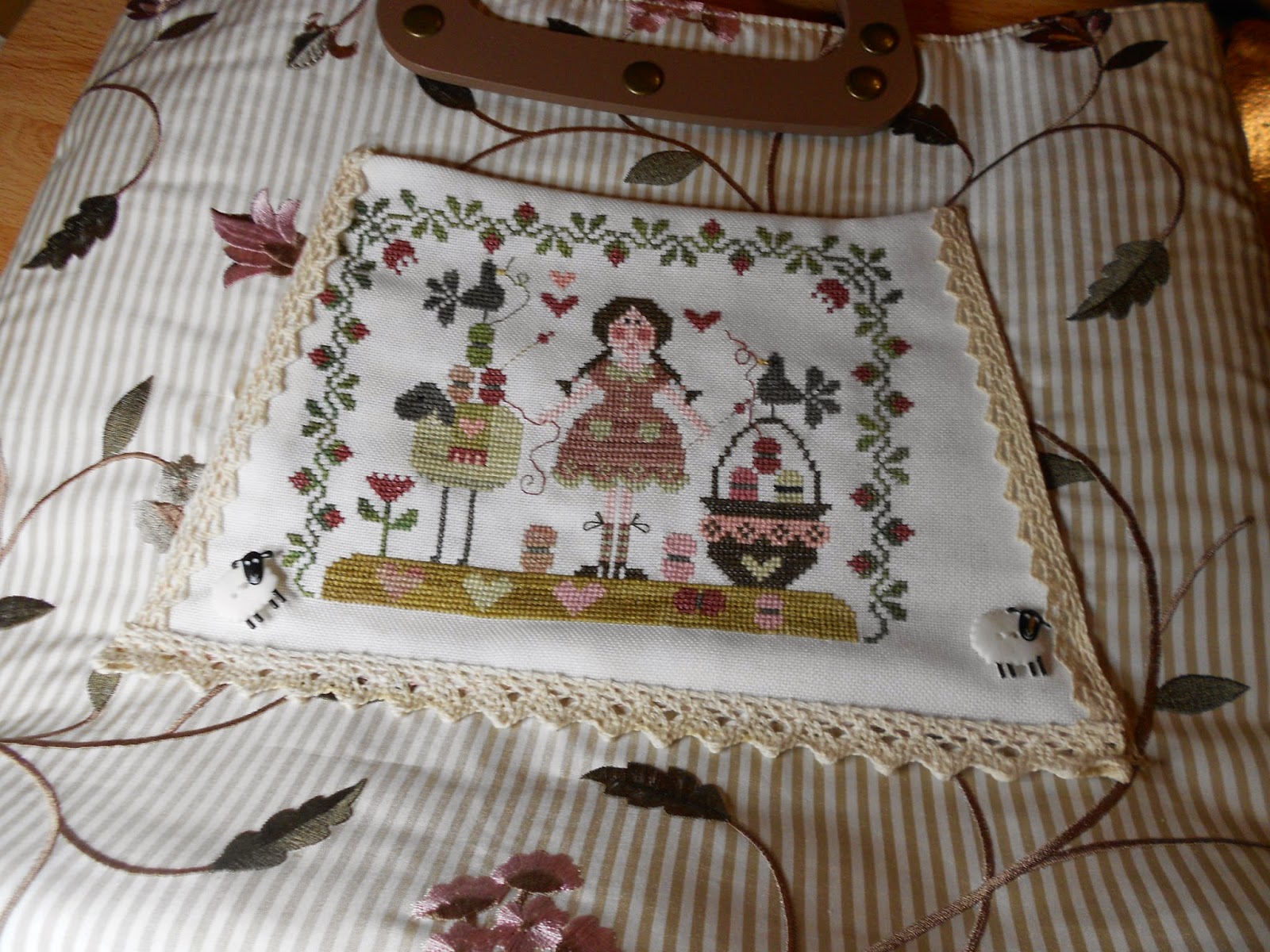 The knitting that is in it is Ellas Owl cushion ,which has been on  the needles for a little too long.So I thought if it had a new bag it may give me the incentive to get it done , 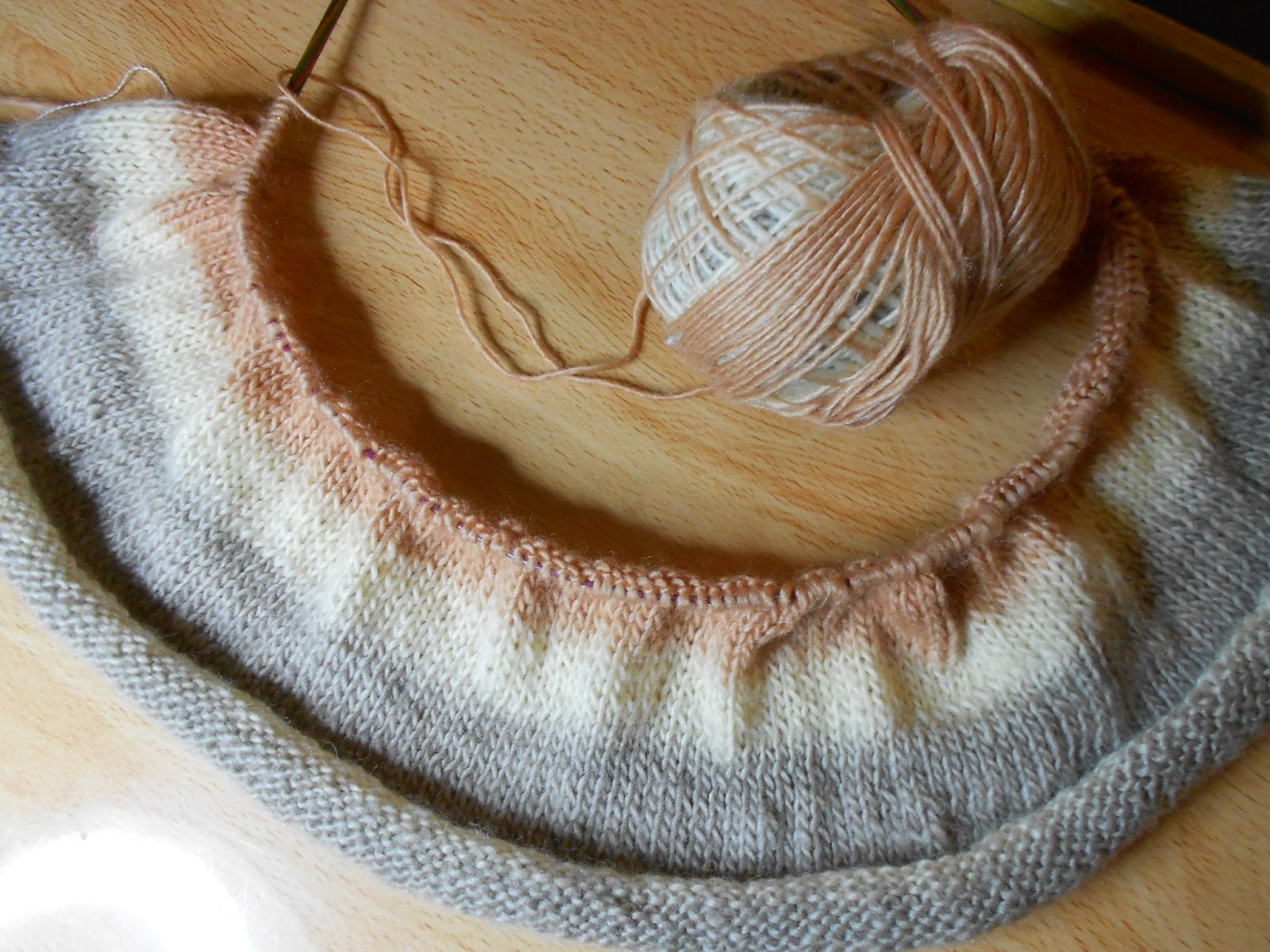 On the stitching front a new start with Sally was Spell of the Moon by Blackbird designs, We must be telepathic as we did not know what we had chosen until the day of starting it which was last Monday,. So spooky night tomorrow 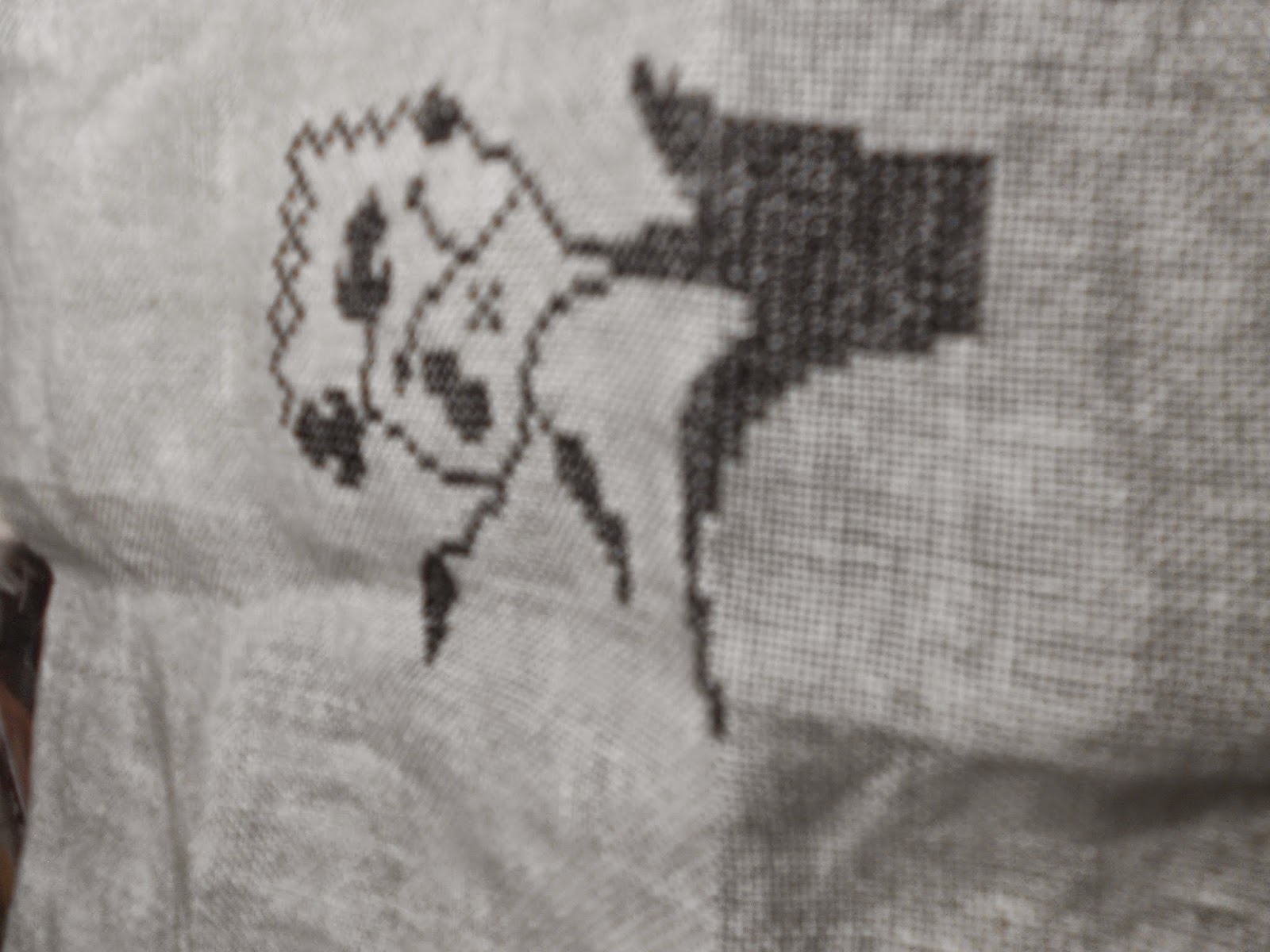 I did most of the tree last week although it is  on its side for some reason. Another Sally day is Friday and we are stitching the ornaments from Country Cottage needlecrafts. This is the one I am doing at the moment, 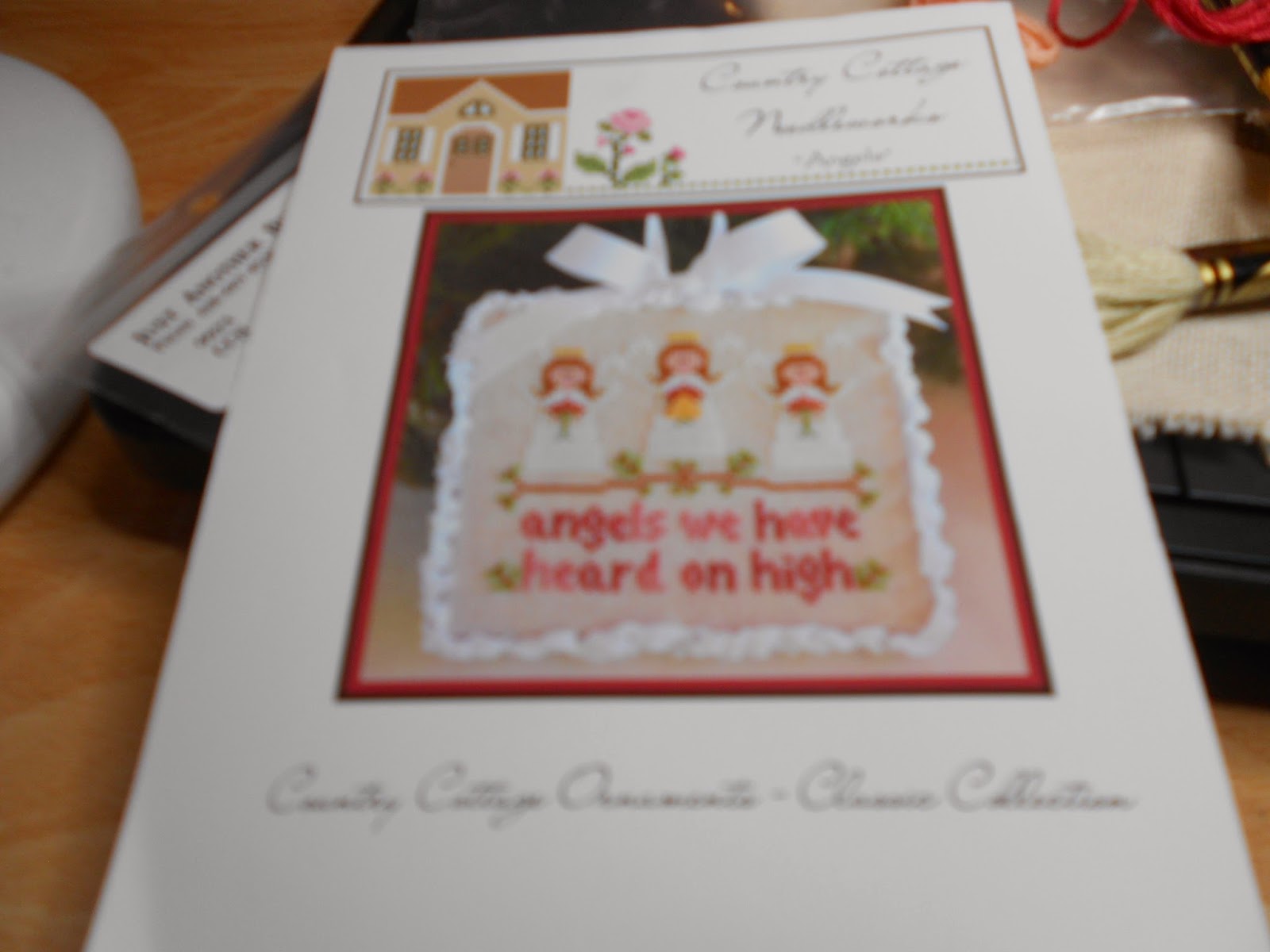 The angel in the middle is almost done. Saturdays are ufo nights over at Needlecraft Haven and I am stitching The Secret Garden here is progress thus far.I was listening to the c.d. below while 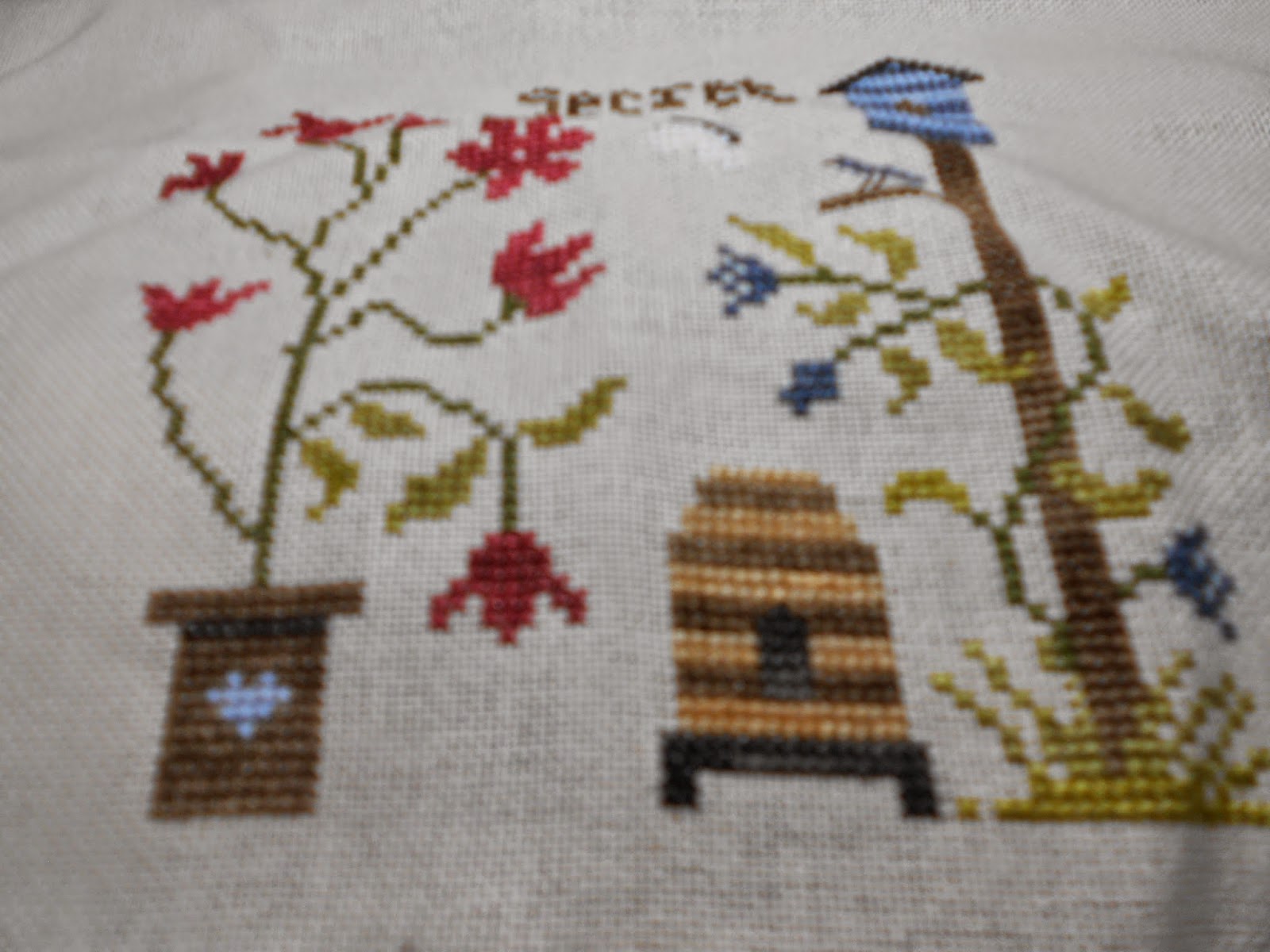 making cards, but I won't show those as I never know who I am going to send them to lol.I had better explain Julie and Mr Stick were running an extra ufo whilst Strictly was on and so I thought I would have a recap of the music.Ollie bought me this for Christmas. 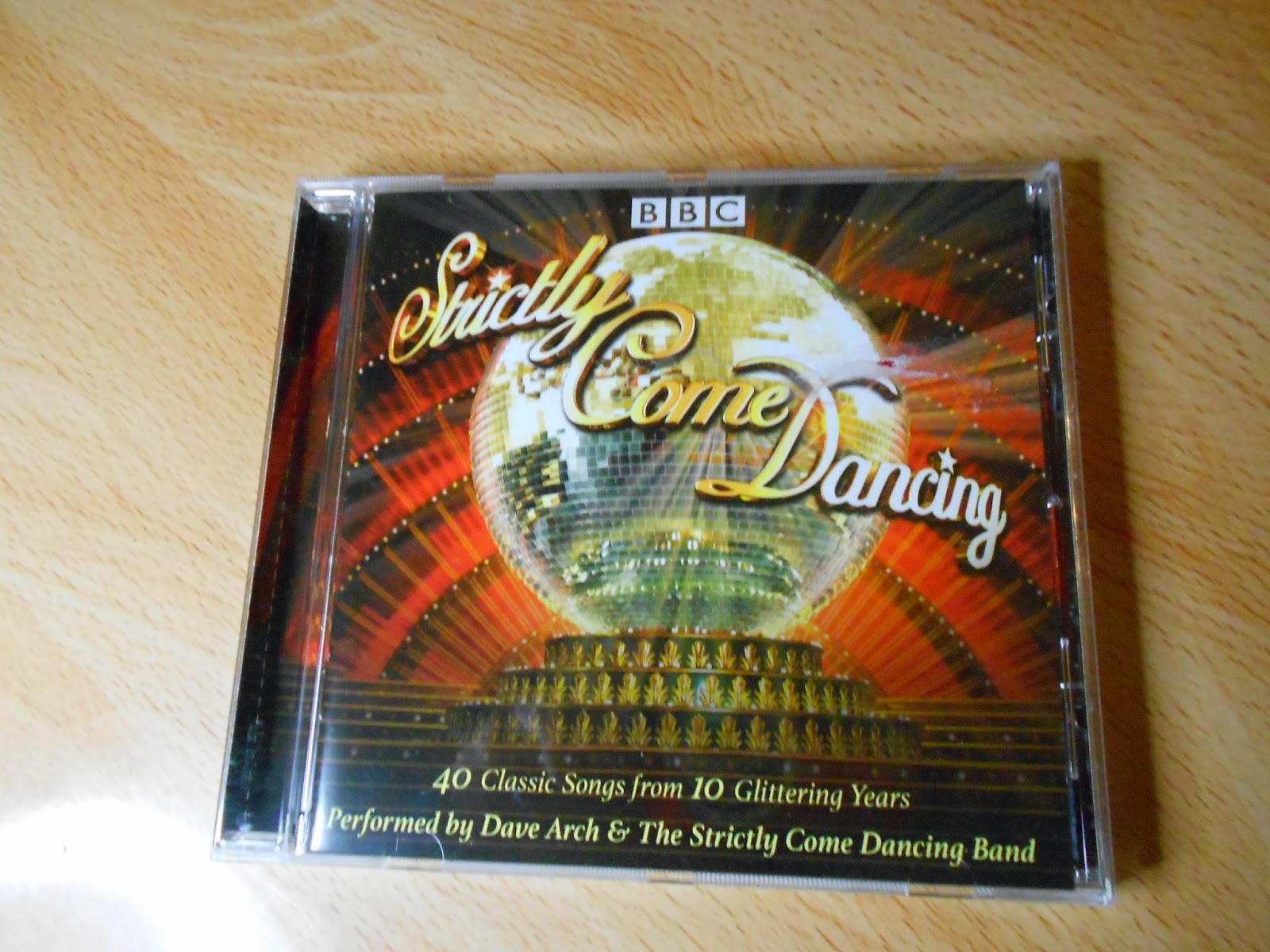 Grandson 2 was thirteen last week and tomorrow Grandson 3 will be 8, he was overheard on the phone last night when we were speaking to Kate. Has Nanny and Grandad remembered it is my birthday on Monday. I don't think we would be allowed to forget somehow.
I was reading Miss Julies blog and she mentioned the book I sent to her in the summer of last year ,she put a pic of a  page out of it that inspired her to do things mentioned and it has inspired me to share the Calendar with you , Well imitation is a sincere form of flattery. 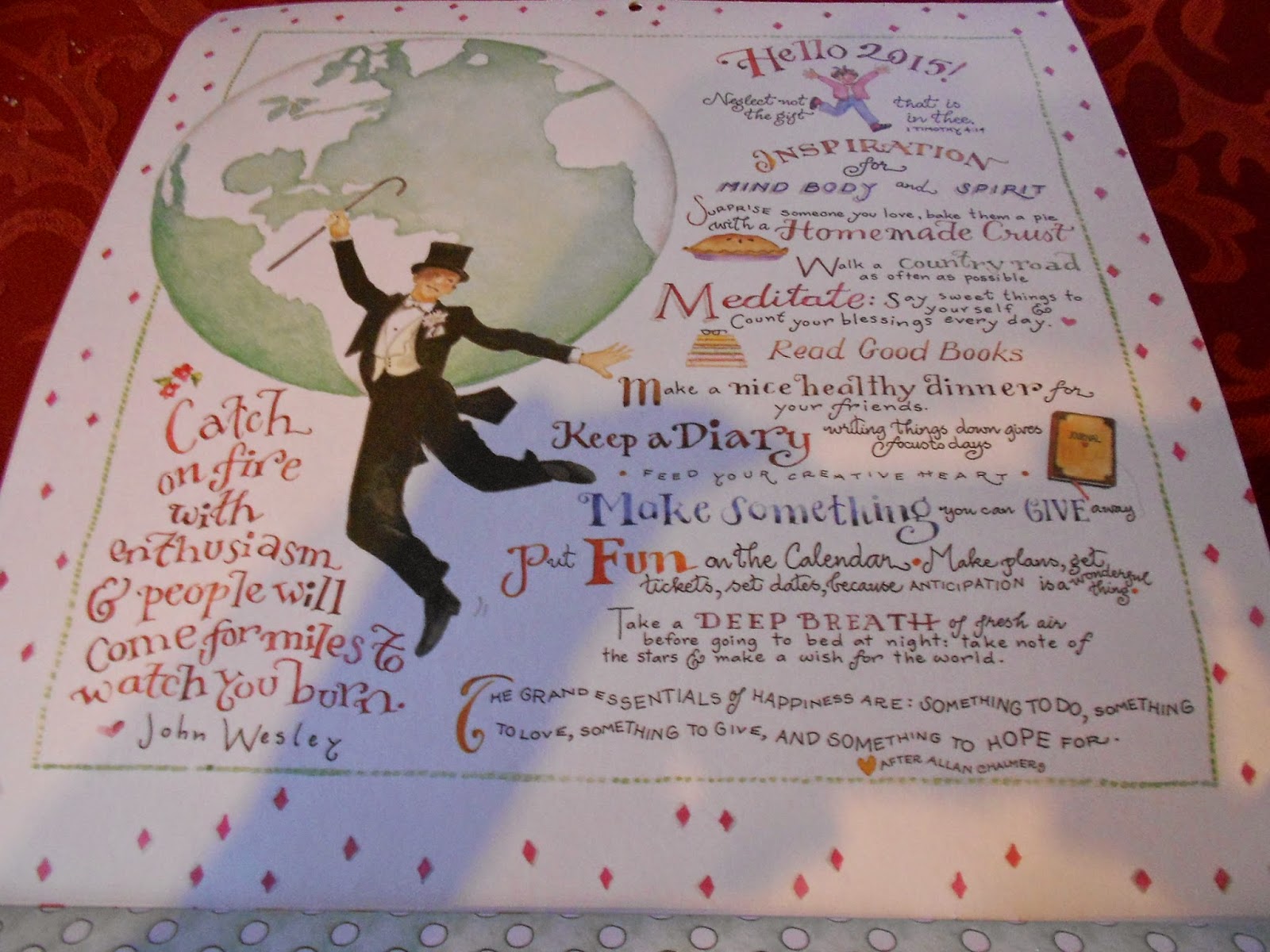 Love the quote at the bottom right.I do love Susan Branch . Her little quotes are so beautifully illustrated. So now my friends ,thanks for the comments last time and if you can spare a few moments I would love to hear from you .Until next time ,stay safe, and keep smiling , Crafting and stitching too.
Much love
Barb,

Hi barb, sorry your class got cancelled. You did an excellent job. How cute. Humphrey is looking good to.

So many projects, so much progress. All so wonderful. Love the little sheep! And dancing.....aawww how I love that too!

Clever you....your little sheepie is adorable and his cute camel friend is quite attractive too.
Beautiful stitching, the new knitting bag looks superb.
Happy birthday wishes to your grandsons, I hope little man has a lovely day tomorrow.
Setting fire to oneself with enthusiasm....I like that on your new calendar.
Love and (hugs) xx

Just love that sheep! Hope the new bag spurs you on to finish the knitting. Great stitching.
Happy birthday to your Grandsons.

Lovely projects Barb. I love the sheep and Humphrey.

Love the little felted sheep Barb. I expect to see many more sheepie projects in honour of year of the sheep :)
I love the calendar page, it's just so happy looking

Great Progress in your Projects! :o)

I love your header picture.
Good for you Barb! Getting that needle felting done. What fun little critter you have created.

Lovely designs you are working on and all are coming along beautifully!

I love your sheep Barb, and also your sheep stitching is beautiful.
I can see lots of stitching going on in your house , I am going to have a go tonight hugs.

Hello my friend! I am here at long last! What a shame your class got cancelled but your sheep is so cute as is Humphrey:).


Love your knitting bag with Tricotine sewn to it. It is perfect. Hope it inspires you to finish Ella's owl cushion.

So excited to be SALing with you again. Loving stitching the owl and the angels.


Secret Garden is looking very pretty. Love the calendar too. So pretty and happy looking.

Lovely sheep and camel ... yes please do make him a blanket I'm sure he will get cold this weather. Wonderful stitching WIPs and finishes.

Wow! You've got a lot of great stitching and crafting going on! Your knitting bag is fabulous I love the lace you edged your stitching with.

Barb, what a shame your class was cancelled but seeing your little creations i don't think you needed a class after all. The little sheep and Humphrey are so sweet - definitely in keeping for the start of the Chinese year :-)

You and Sally do so well with your SAL's. I love what you have done with Tricitone. I've attached stitching to a bag too and it looks really lovely. Your other mutual projects are coming along nicely too.
I love the Calendar page from Susan Branch that you have shared, so inspiring. I was sent her Heart of the Home 2015 calendar and it is really lovely.

Rula got the Strictly CD as one of her Christmas presents this year and we have already been treated to several dance arrangements from it. Great fun :-)