Oh dear I am a bad blogger, a month to the day since my last post. Hanging head in shame here. Well I have been doing ,but what is debatable.
I think I had better start with the header pic, Ollie wishes all a happy Christmas and a peaceful and happy new year and that goes for me and mine too.His feet are still poorly as the pic shows.
I really do not know where to start as so much has been going on. We have had a 16th birthday and a 19th,
Caitlin and Jack grandchildren. I have a pic of the family to show you on the evening we went out for a meal. 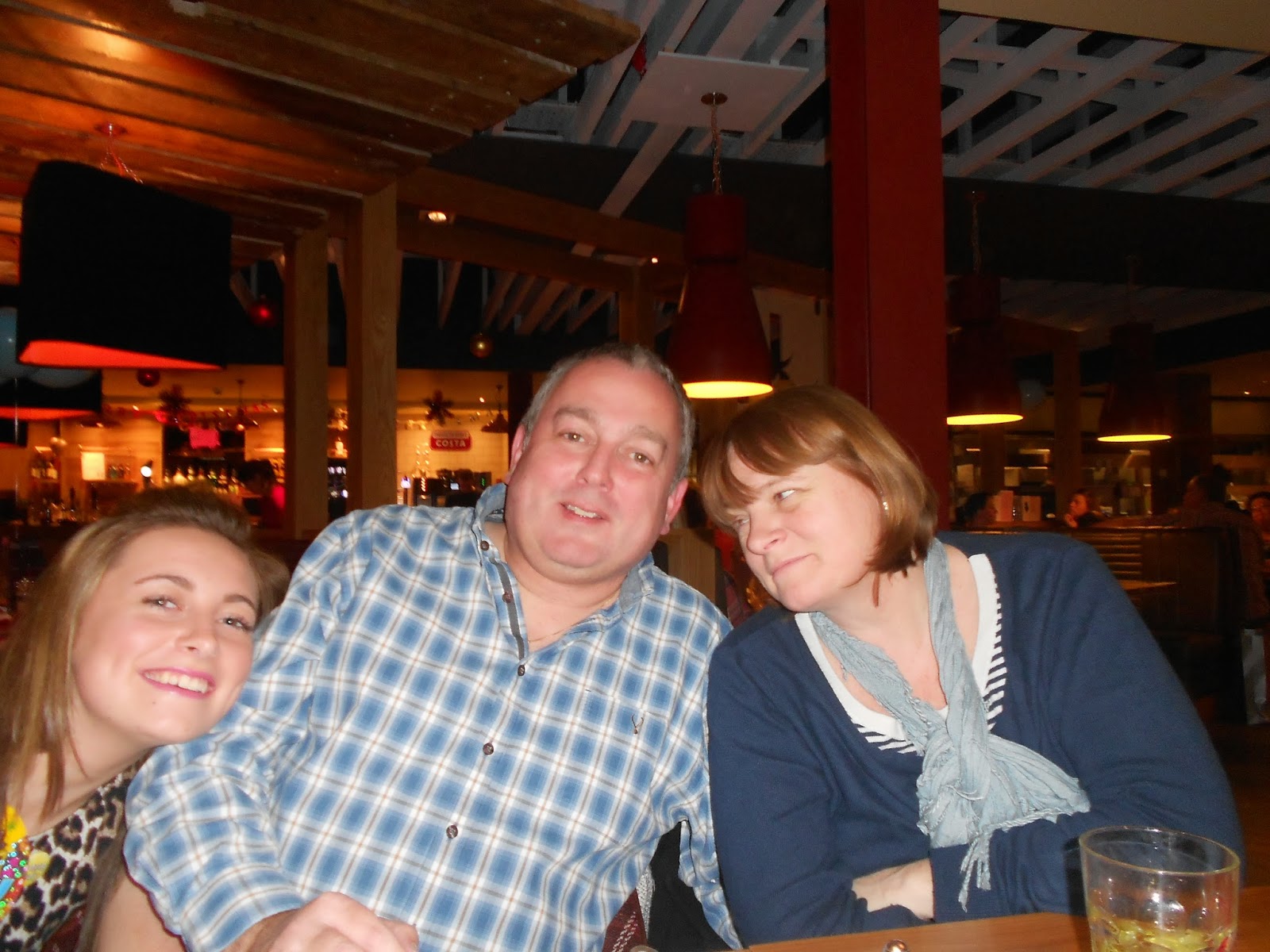 This is my daughter Kate with Iain and the birthday girl on the left. 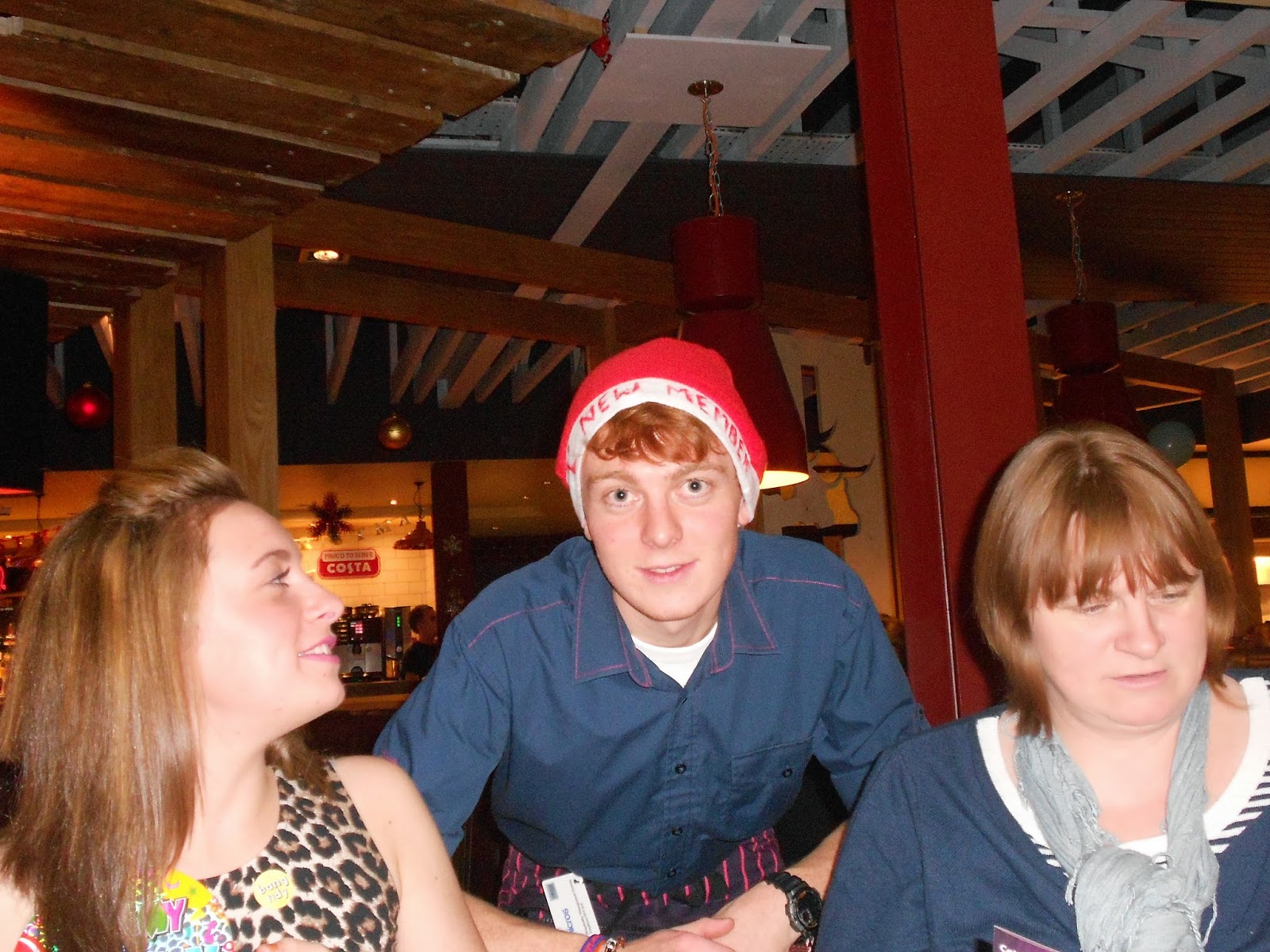 Barman Jack who was on duty that night. 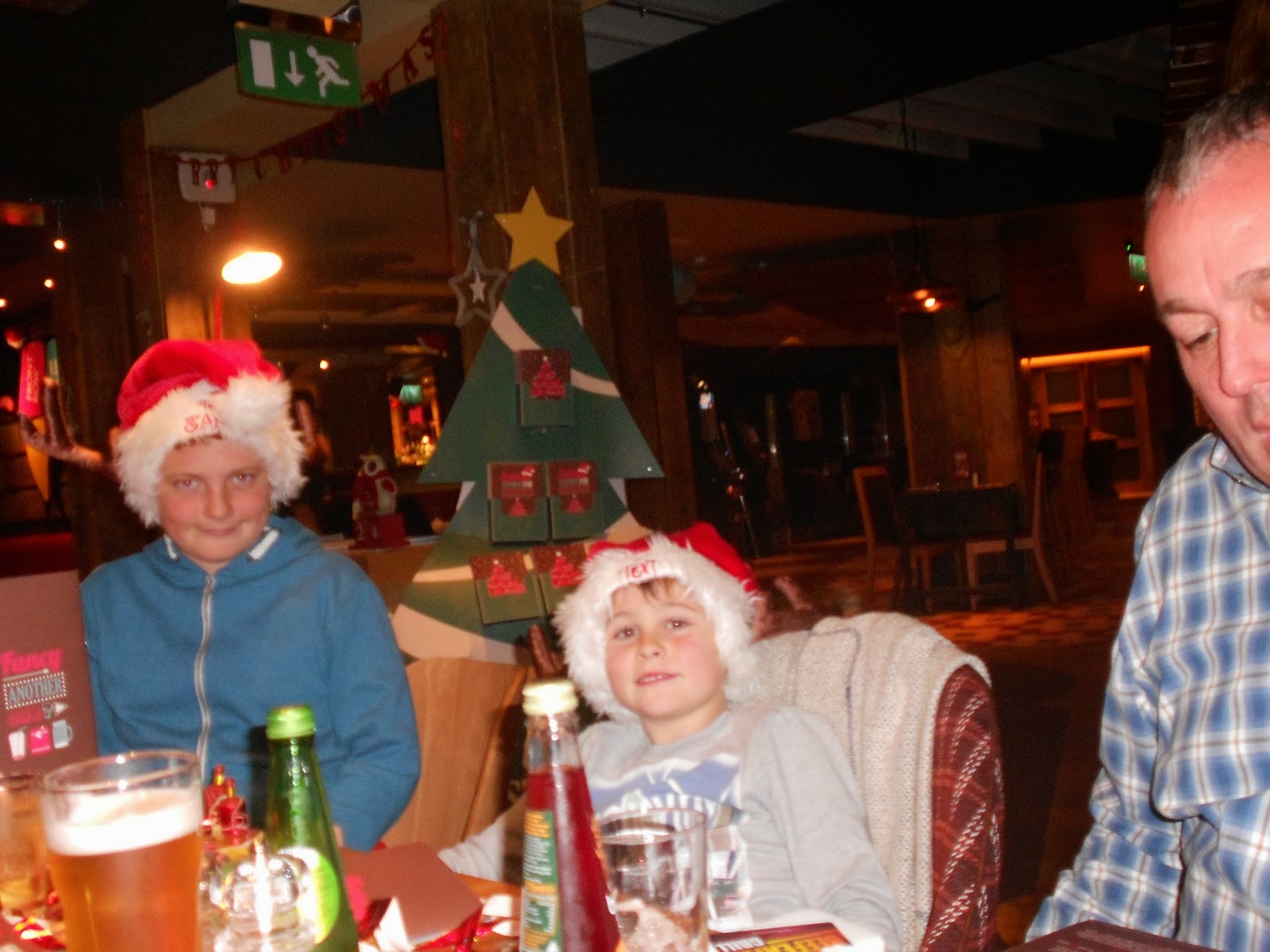 Alfie and Sam . Looking as if they have had one too many. 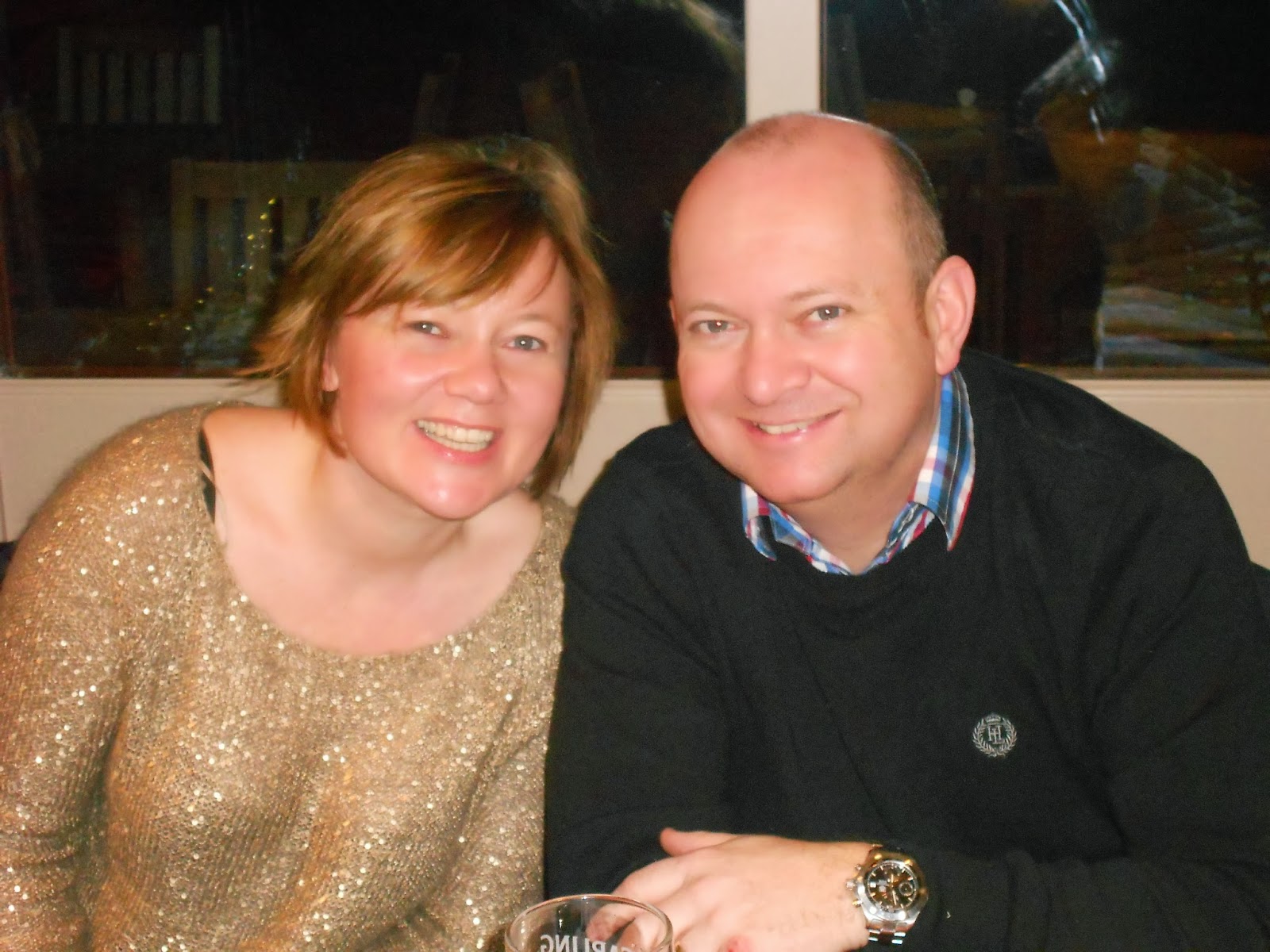 Graeme our son and his wife Sue.
Although we had one taken too ,it was dreadful and also the one of sons daughter Ella ,I shall show you the one of Ellas school photo. 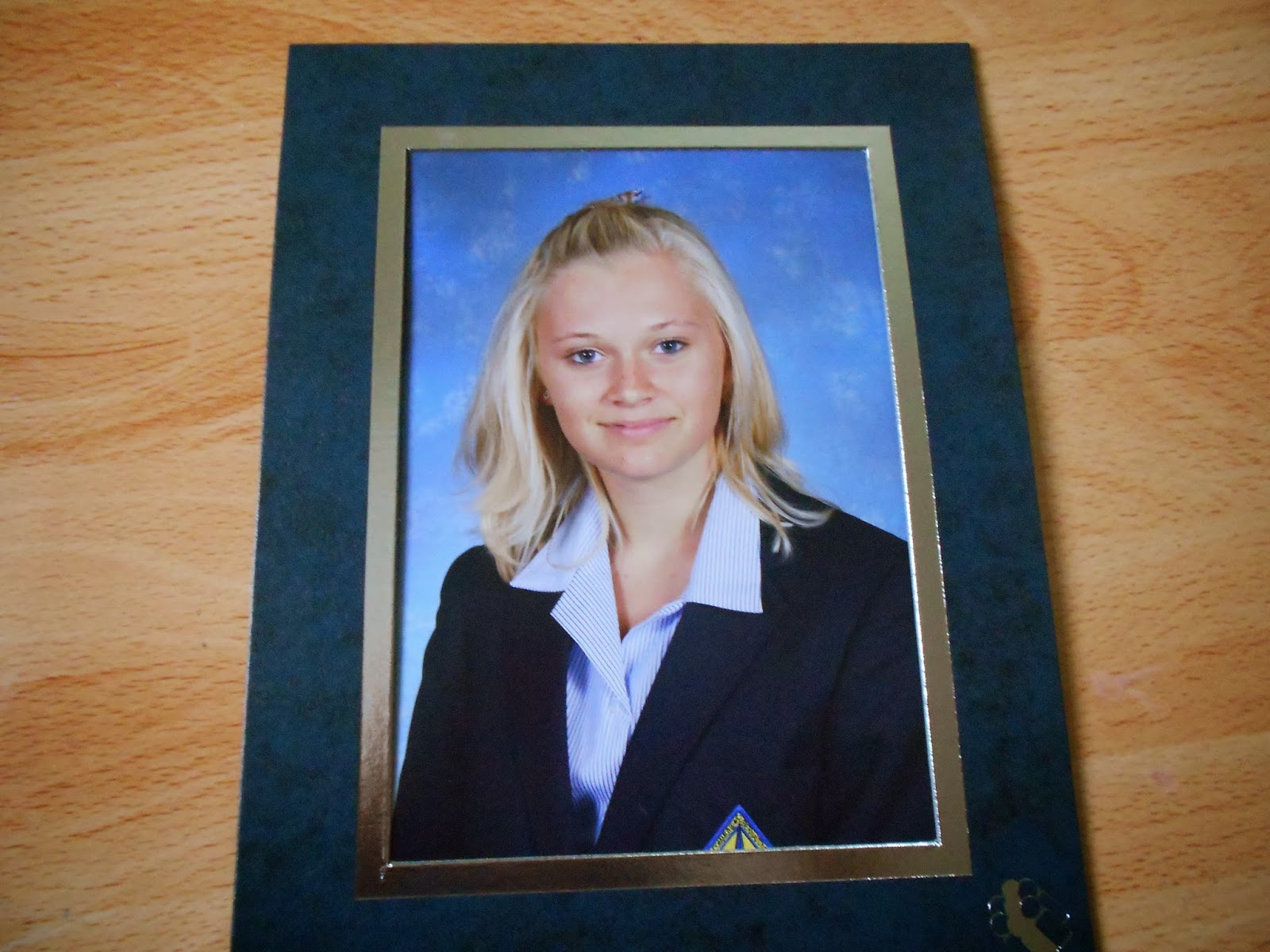 So there you have my family of children and grandchildren Of course the youngest is very excited,he says he is on the "good" list,but I have my doubts lol.Talking of the season,I have had gifts arrive which have not been opened just placed under the tree so thanks go to those who have sent if you are reading this.. Nothing edible as Ollie does not seem interested. I did have a parcel arrive from Christine of Alchymsts Study it was the blogaversary prize that I won on her blog. Here is what was in the parcel. 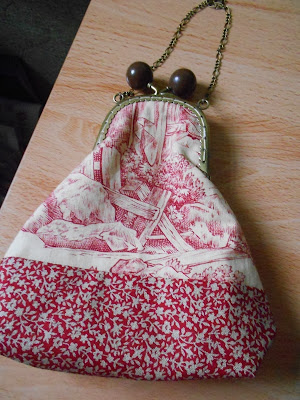 Isn't it just fab-u-lous! I am going to put precious things in her. Christine had to be asked if she had made it, as it was just so professionally done,should have known better but of course this clever lady had done it herself. It was a piece of vintage toile she has used and I really am delighted I won!!! I was also lucky enough to win Sallys blogaversary too ,and as I cannot remember if I showed you that or not , I will post it next time as I cannot take a picture as my camera has gone out with DH. However I was also in the Ornament Christmas exchange (got that the wrong way round)over at Needlecraft Haven and guess who mine was from.Yep Sally. 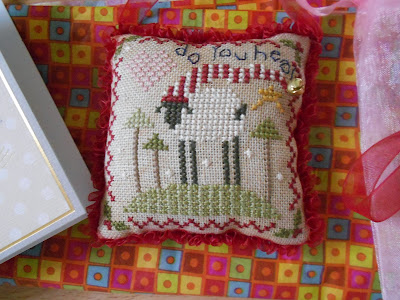 Of course if you read this blog of mine you will know my love of sheep and Sally knows me very well and SB is a favourite too so I was thrilled when I opened this. The back was a giveaway as to who it was from but all have been revealed now so I can show that too. 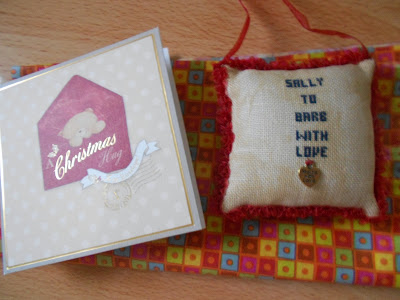 The one I sent ,being the 3rd attempt was this Prairie Schooler Woodland Santa. I have 2 partially finished reindeer here. The first one I did the back leg the wrong colour tried to frog it and made a hole in the fabric. Started it again and got the reindeer right apart from when I tried to put his saddle on I had not stitched enough rows. So start no 3 and time getting tight. Phew a sigh of relief when I got it right. Pleased to say Christine loved it. It is stitched over one,as it was a tree theme I also added a tree to the back. 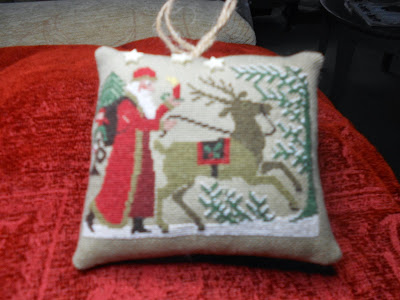 Sorry it is a bit blurry. I added some stars as he only has a candle to light his way. 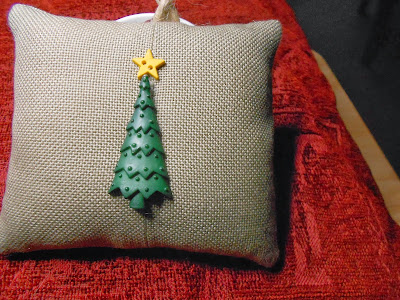 Now I know you may be feeling as if you hear the C word one more time you will burst into song and be damned. hee hee.  Last week a rather large parcel arrived addressed to DH , Wonder what is in there I thought. So phoned him and he said open it and see. Don't need telling twice so opened it was and who was inside but SCROOGE! Very well packed hence the large box.
I had seen him on an article in our local paper about Velvet and Dash a company based in Dorchester, and of course I do like a good dose of A Christmas Carol (all of the films I watch) at Christmas and have a stocking hung above the mantle that Sally and I stitched together last year. Anyway here is Ebeneezer  . 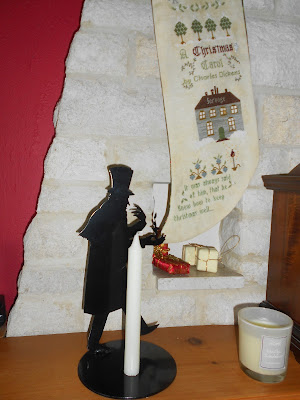 Here he is with his candle alight and from my chair it looks as if his candle is alight too. 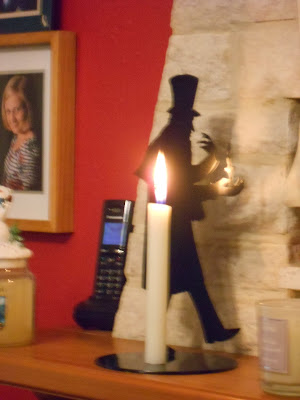 I did not take this one so do not blame me but DH . Speaking of Martin ,he has been very busy with the glass and as some of you know ,Tina has a little tree he made for her tree and loves it. He promised the gardener Dale a plaque ,this when he did our garden for us. He has just finished it ,in between other things ,we are going to give it him for Christmas . As he does not read this I can show you the finished Bamboo plaque. 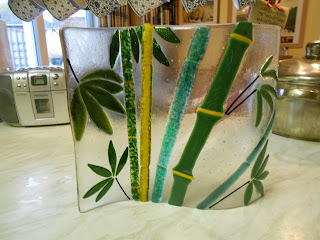 Your eyes do not deceive you it is wavy.
Took ages to fire in the kiln.
I have been stitching a little (well a lot )but it only looks a little on QD I am hoping to get this finished by the Finals of Strictly come dancing , it is well over due I can tell you. 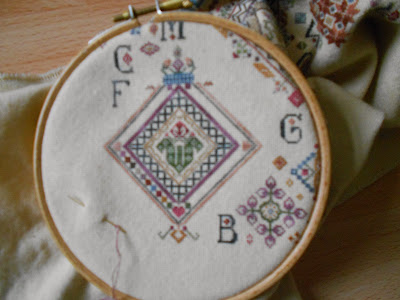 I have stitched a little more than this but will show you a pic now when it is  finished!!!!
I also have finished Wisdom this week and will be starting Friendship on Monday along with Sally. 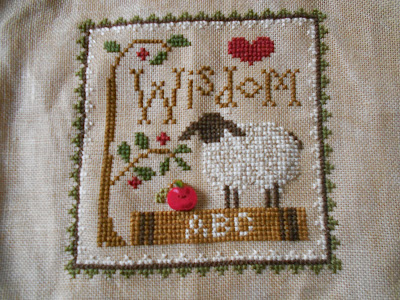 Today I had Gratitude arrive from The Patchwork Rabbit ,only one more to come but I have 3 here waiting to be stitched. I also had some stash arrive and there is still one to come. Here is the latest additions to the evergrowing pile. 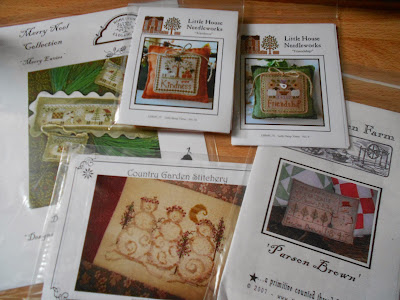 I think I should have a winter theme all year next year. I have seen a new one from Shepherds Bush but will wait to see what Santa brings . I know he is coming because I have been a very good girl this year!! I have now lost ......drum roll......3stone and 2 lbs. I am having hair cut on Thursday so I might allow a photo to be taken!! If you can bear it. Still want a bit more off so sticking to it until I get where I want.. Martin has had to buy me new clothes. 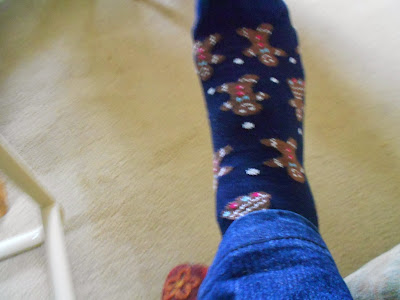 These are my new gingerbread man socks and my right leg in jeans!! never thought I would be able to wear jeans . So on that happy note I am going to wish you all a Happy Christmas Time and I may just may eat half a mince pie. Going to walk Ollie now so in my new socks --Run Run as fast as you can ,you can't catch me I'm a gingerbread man.
Take great care ,and keep smiling . Leave me a comment if you can squeeze in a moment as I will be popping by to see if I have any !!
Love Barb.x

Nice to see you back: I am a sucker for Christmas socks lol

Welcome back! Love all of your stitching and new stash! Enjoy

So glad you like the bag Barb.
Nice to see all the pics of your family.
All your stitching is gorgeous and Martin's glass plaque is amazing. I'm loving the socks too

Oh Barb! I am laughing at the thought of you and Ollie running with your gingerbread socks!! ;) My kids loved that story.
What wonderful goodness today! I love the ornament you stitched up and gave.

Glad to see a post from you Barb! What a lovely family you have! Great stitchings both given & received : ) I love unusual socks ... especially Christmas ones ... & those gingerbread ones are fabulous : )

I love everything! Lovely stitching :)

Very nice post. What a lovely family gathering and celebration! The bag is so pretty, I'm sure it will hold your precious things. Great stitching, stashing, and stockings as well! Have a wonderful holiday season.

Lovely to see a post from you my dear friend. Wonderful family photos.

Scrooge is brilliant! What a wonderful surprise for you.

Lovely stitching and new stash. We both seem to have an evergrowing stash pile although mine won't be growing too much next year other than my autos. Just seen the December Garden Journal and it's my favourite of them all!

Well done on your weight lost. Don't forget a photo after you've had your hair done!

Ollie looks so sweet in your header! Give him a big hug from me. Hugs to you and Martin too and have a wonderful Christmas. xx

Gorgeous gift from Christine and lovely pics of the family. Congrats on the weight loss, I'm almost at target now however Christmas may have just scuppered my timetable!
Lovely ornaments and a great update on new stash and WIP's.

Big congratulations on your weight loss - I know how hard it is! I enjoyed seeing all your ornaments and Quaker Diamonds too. Love the Scrooge candleholder - what a nice surprise from your hubby. Happy new year!