Wet Wet and more wet but light at the end of the tunnel! 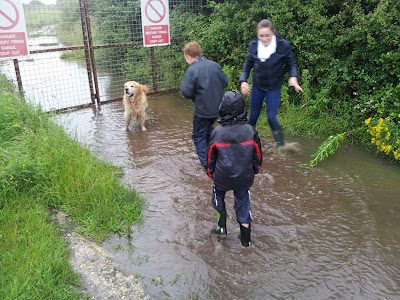 One rather wet Ollie , plus 3 rather wet children and grandad. This was taken last Saturday when we had 3 of the grandchildren over. They had a whale (scuse the pun) of a time .
This is in a country lane that leads to the firing ranges, Alfie wanted to go up to the fields but we couldn't face mud and wet. 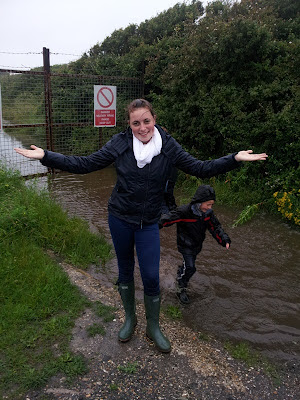 They all arrived back very giggly, absolutely soaked but had had a great time and it did not cost a penny. 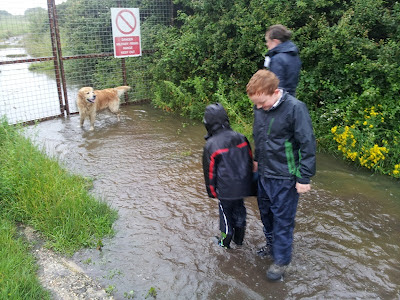 It rained so much that the car park that is earmarked for the Olympic visitors to Weymouth was under 3ft of water - hope it stops soon , Martin keeps saying he will have to get more wood!! He has an idea of building an ark

However talking of Olympics ,I know that seems to be all we hear these days,but yesterday the torch arrived in Weymouth and although we got half drowned it was worth it to see this just outside our front garden . You will have to excuse pic of the boys it was raining so hard. 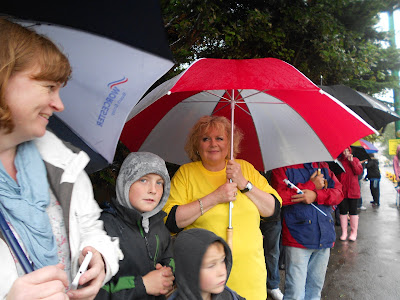 This was one of the ladies that made sure that all was well with the crowd and gave us information.I actually got Kate the daughter in it too. I felt sorry for the poor lady as she was not dressed for the weather. Then of course the flag seller came along so the boys had to have a flag. 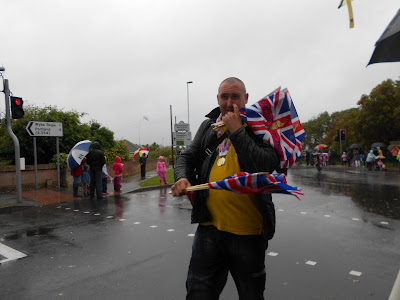 We did have a bit of a wait in the rain,as you can see by the lack of people.There were a few more by the end. However we had someone to keep us in hand lol. 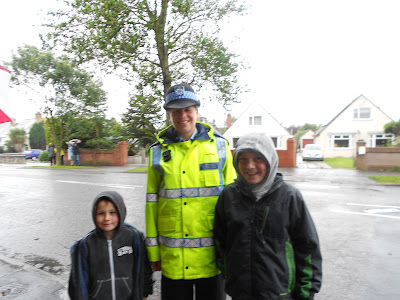 Not only that you can see our house in the background too. The next to arrive were the police on their motorbikes. 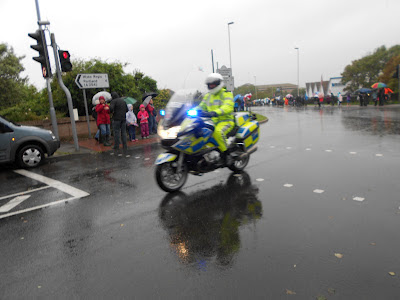 There were more in front of this one lol. Next was a golden BMW and various sponsor lorries. 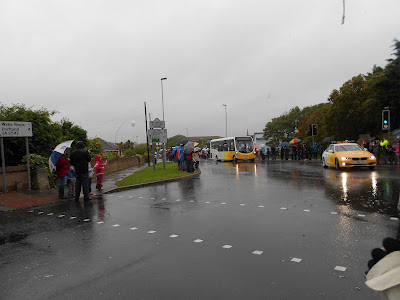 The bus that carries the next runners  unloaded  right in front of us. 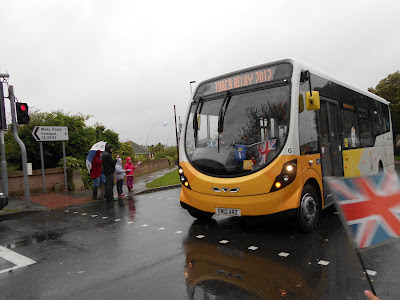 Well almost in front of us. 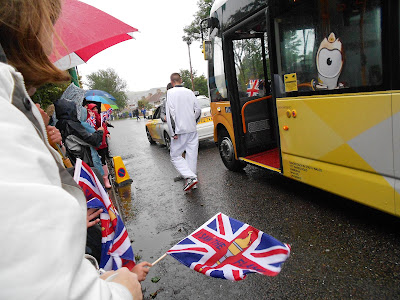 Excitement was building as we could hear the cheers. 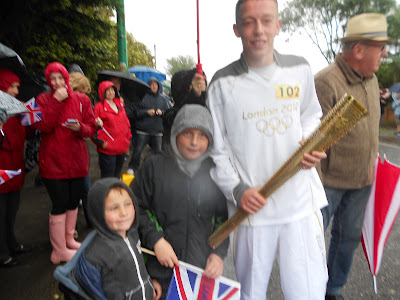 Meantime 2 rather damp boys were having their pic taken with the torch bearer. 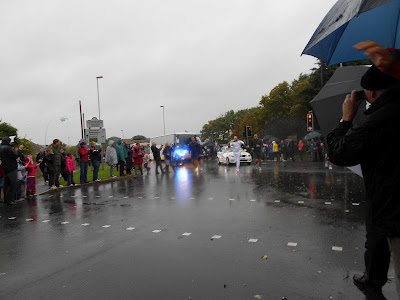 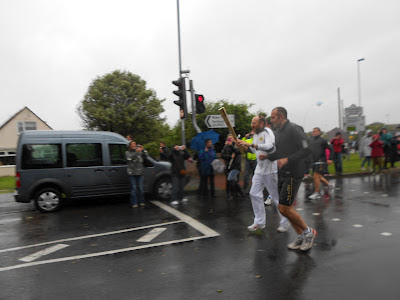 Then the "kissing"of the torches. 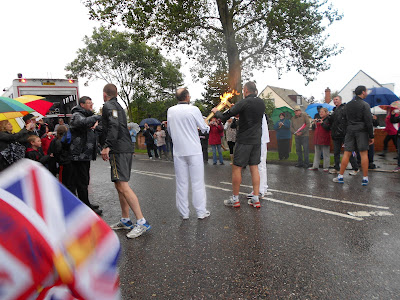 So who would have thought, all that going on on our doorstep. We came in and then I cooked dinner. Today I am suffering for it but it was worth it. The British spirit prevailed despite the weather. We could have gone to the beach and seen the torch arrive there by sea, and watched the cauldron being lit but I feel we were wet enough. This morning Caitlin had to be at the lighthouse at Portland Bill by 5.30 to see the first torch of the day being lit and be in the guard of honour.So we are all torched out here.
Enough of all that now ,how are you all out there, your comments as always keep this blog of mine going.Thankyou so much for leaving me a word or two.  I have been stitching but I am afraid that I cannot show you it as it is a secret for the moment. I have been knitting too and I am afraid it has been a rather bad time of wailing and gnashing of teeth (need false ones soon.) I get to row 43 and have taken it back to row 37x 3 times  , I am now back again at 37 and have put it to one side until I am in the right frame of mind to tackle it again. With 250 stitches on the needle, it aint funny taking it back stitch by stitch. Oh well perseverance . 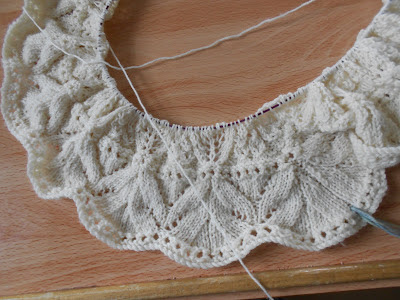 Retail therapy since last time ,well just a little . The July wordplay has arrived from the States and added to the others to be done. 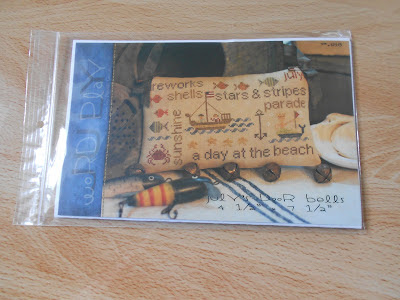 This, was something for us both as we do like Barbara Erskines books and this one was released on the 5th July. 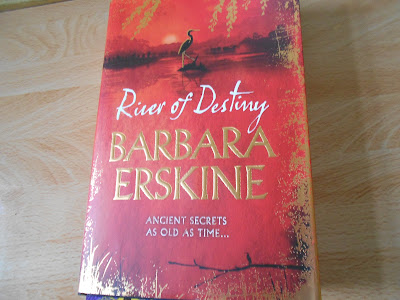 The blurb on the back says. An anglo saxon burial mound protected by an ancient curse. A Victorian tragedy of forbidden love.The evil power of the past which grows ever stronger.  OOOER!!! 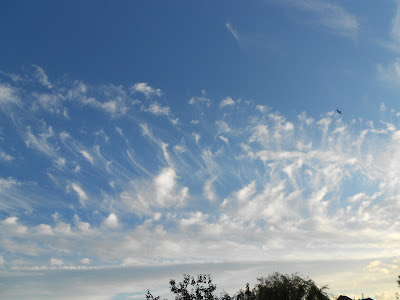 Anyway all ,sorry this has been a photo post but just have to show you that the rain does not always rain on my parade.This sky looked as if it had been painted on. 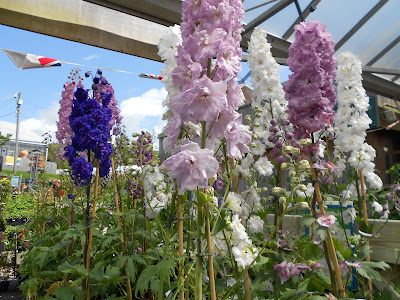 .How about these beauties ,not mine they belong to the garden centre. 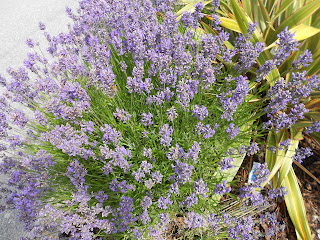 This is mine though and if you sniff you may smell it. I am off now hope you managed to stay until the end. Next time I will show you Martins latest creation.
Take care my friends and I will see you in a while .
Hugs n stuff
Barb
at July 13, 2012

I saw oin the news that you had a lot of rain. Here's also raining every day but not as much as with you.

I love your knitting, it looks beautifull, just as the wprdlay pattern you recieved.
I never hurt of that writer, I'm going to write that one done because it sounds great that book.
Your flowers pictures are very nice.

Thanks for sharing the torch news - I saw on tv it had been to Weymouth and wondered if you managed to see it.

Your knitting is beautiful- you're so clever Barb

It seems like there are weather extremes on both sides of the ocean! Everyone seems to be in good spirits despite all the rain. :) And all of the Olympic excitement right on your doorstep! Your knitting experience sounds very familiar. :) It's looking pretty though! That book sounds right up my alley.

What a memorable day you had! Beautiful flowers too. No worries, I love photos!

We're in a drought and you're getting drowned. Always feast or famine!!! Enjoyed the post.

Sounds like you had a fantastic day. Your flowers are gorgeous. Lovely knitting.

We have the same here rain rain rain, when will it stop, great photos enjoyed your post, hugs.

Lovely photos - we were lucky when it came past us the sun was shining. Hope you are well xx

Lovely post Barb. When I saw the torch in Wales we had to wait hours in the hottest sun then it just ran past. Didn't stop or anything! Love your knitting. X

Yep...we are having a cool and wet summer but you are being drenched. Still, it gives us a reason to sit indoors and stitch...right? :-)

Thanks for letting me smell your lavender.

Such memories the children now have. We are in such a terrible drought right now. Please send rain!

How lvely you got to the the 'torch kiss' after the air it passed us by in quick smart time, way too much advertising for my liking lol.
Wow! Stunning knitting, but oh no, that was a lot of knitting frogging - do knitters callit something else... Mmm now that's got me wondering?
I had an amazon delivery of that book this week from a very kind lady....
Have a lovely weekend, love and (hugs) x

How lucky to have the torch go right past your house like that!
Your knitting looks fabulous, sorry about the frogs

Wow, what an exciting time you've been having in, not so sunny Weymouth :-) But, as we well know here in England, we can have fun whatever the weather and it definitely looks as if your grandchildren are having fun. I'm so sorry you've been having so much rain. It surely MUST come to an end soon. I think the next generation will be born with webbed feet.

I loved seeing all the photos of the torch arriving to your corner of the country. What a wonderful opportunity for everyone to see it up so close.

I love your little piece of knitting. I can see how complicated the pattern is . What a shame to have to do so much reverse knitting! Hope it's plain sailing from now on.

How lovely to finish with a deep wiff of gorgeous lavender. So calming and soothing :-)
Angela xx

I hope the weather gets better soon Barb. It's just getting silly now.

Love the look of your shawl. Shame you've had to take it back a few times. I'm looking at wool for the Summer Flies one. Thinking of using King Cole Riot.

See you tonight. I hope Martin has got the ark ready!

Oh Barb, that looks really wet. But seeing the Olympic torch being carried through the streets is definitely worth standing in the rain.
I read the blurb of your book and knew that I have to be on the lookout for it. Sounds soooo adventurous and mysterious.

Fantastic photos Barb! Good thing people had their Wellies on! Pretty fun to see the Olympic torch hey?!! Love that sky photo and your lavender! Thanks for sharing!

Great photos Barb, something for everyone to remember.
THe knitting looks lovely, shame about the frogging.
Your lavender isn't as waterlogged as mine...lol

Oh my goodness look at that rain we REALLY need that! My grass is dead, the field I played ultimate frisbee on had brown grass and green weeds (go figure) we're so desperate for rain here that we're being told to start watering our lawns to prevent fires starting!!!!

Omgosh, what a wet torch day you had and all the others, but what fun your boys had... we waved our torch on a glorious sunny day here in Essex. And it was amazing to see so many people there, close on 2,000 it seems. Isn't exciting? Well I think so!
Love that knitting, and poor you undoing stitch by stitch, but when its done you will be so proud!
Happy days
Chris xx

Hi Barb, Thanks for visiting me today :) I am glad my post about Clovelly brought back good memories for you. Sorry I have been missing from blogland for such a long time. Hopefully this summer I can get back into it during the 6 week break from school. I enjoyed your pictures from when the Olympic Torch visited your town. It was here in June and my daughter went to see it with her friends. I watched it online at work! It brings such a great atmosphere everywhere it goes. We loved being down in your beautiful part of the world the week before last. Luckily I think North Devon missed out on the worst of the weather.
Best Wishes
Lindsay
x