The long and winding road-

Well not really a road ,more a country lane, we used to walk here when I was more able and  one day last week I felt I needed to see ,oh you are way ahead of me aren't you - sheep yes ,but bluebells too. This "road" leads to a wood which after splashing through a stream (well that was a few years ago) you climb a ravine and find in a clearing a ruined church. There are also a couple of headstones and the whole place is a mass of daffodils. The whole walk is about 5 miles. No way I can do that, I did not even get to the wood,but it was nice what I managed. On the way here we saw some little lambs and they were oh so close ,but as soon as the camera man climbed up the bank ,they shouted for mum and off they went. 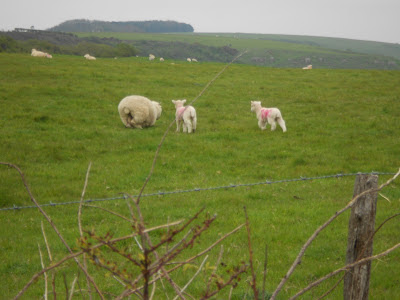 We  came upon the bluebell wood and were surprised they were not fully out,as the ones in the garden are almost over. So here you are an English bluebell wood, can you smell them. Since the last time we were here a big sign saying Private has appeared on one of the trees ,so we could not let Ollie off   his lead
to run.. 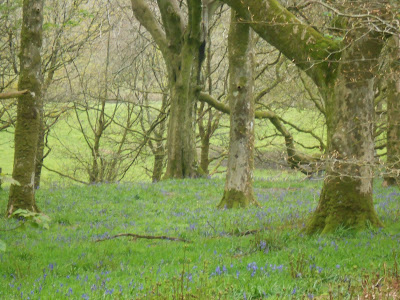 We drove a little further and  came across a little group of Older Sheep ,in fact I thought one was dead as it it was laying with its eyes shut. I have never seen a sleeping sheep. By the time Martin had reversed into a  layby and gone to take the pic for me ,it had woken up. 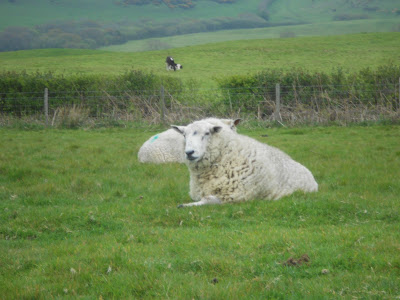 Of course this is not all about sheep , there are some of these too lol. 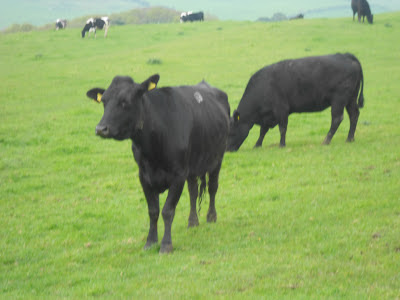 Also this animal was having a whale of a time. 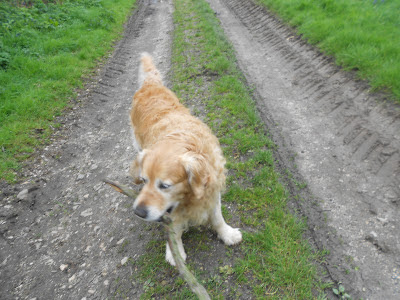 When Ollie has a stick or a stone thrown he has to try and bury it ,for some reason best known to himself! 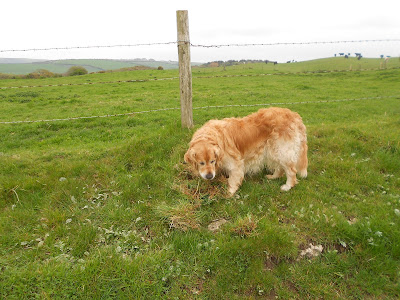 A last look at the English Bluebell. Such a pretty colour. 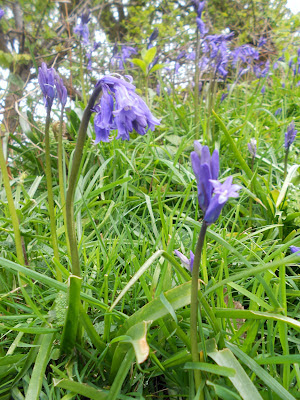 I expect you are wondering if the stitching has taken back seat. I have not done as much as I should have.
I did finish the Shepherds Bush Poor Robin, 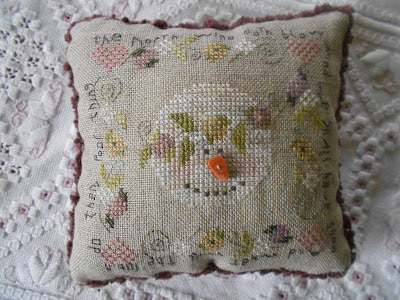 Next week sees a new Shepherds Bush design but I cannot show you that as it is a private exchange and so a secret until Sally /Colleen receives it. I did finish a little something that I loved when I saw it ,it now sits on the handle of the Tea cupboard. 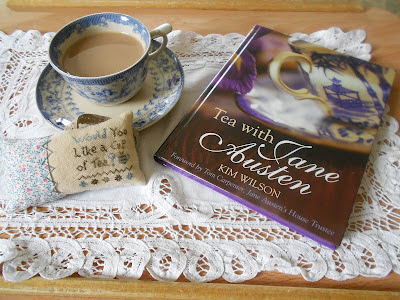 The design is by The little Stitcher and stitched over one on Sassys fabric,the cup and Saucer is from The Pemberley Collection that my Dh ordered as a little surprise for me from The Jane Austen Centre in Bath. He also bought me a lavender quill to go in an old pewter inkwell I have. Also some paper and envelopes. 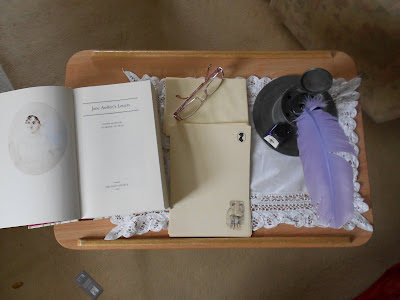 This is progress on Mrs Darcy which will be worked on in the parlour at Needlecraft Haven ,maybe I shall be finishing this in a few weeks time. 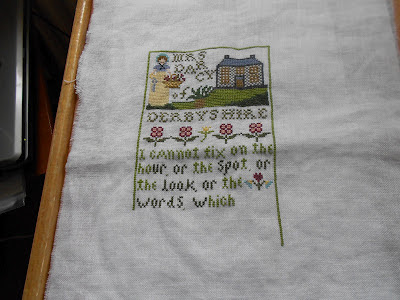 I am also working on an exchange piece for Needlecraft Haven but that will be under wraps for a while yet as opening day is not until June 30th. I have also sent another little finish off this week so when that has been opened I shall be able to share it with you. You will have to excuse if this is a little disjointed ,back on pills and my brain is a little scrambled. Please leave a comment if you would like to. I hope you are all tickety boo and thanks for coming to visit. Would you like a cup of tea? 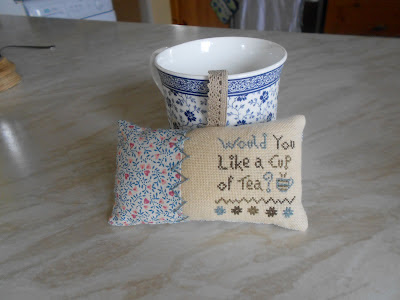 What a lovely post. I love your walk in the woods. The bluebells are lovely at this time of year. Lovely stitching too as ever and your JA collection is so sweet. x

Beautiful photos Barb. I am hoping to enhance my collection of JA items when we visit the Jane Austen Museum in Bath on Saturday. Sending you many hugs my friend xx

Oh you have done nice finishing. :)

How lovely you managed to get out and have a little walk amidst all this recent bad weather. Bluebells are so beautiful when you see fields of them.

The cup and saucer are just darling, what a sweet hubby you have.

The SB finish is a cutie, those little carrot noses are so funny, you used to see lots of designs with them on but i haven't seen one for a while.

Happy stitching, i hope the pills do the trick and you feel pain free soon.

Lovely stitching. Look forward to seeing those stitchings that you can share at the moment. Great photos from your trip.

Lovely Header Barb, your stitching is beautiful KLove the tea one, and the large one you are stitching.
Beautiful photos of the woods love Bluebells oh how it takes me back in time. Hugs.

I would love a cup of tea.
Thanks for taking us on the journey. Loved the little sheep, how cute. I am a city girl and you don't see sights like that.
Teresa's Heartfelt Stitches

Ooo, that tea looks lovely and the teacup is beautiful. I was just watching Pride and Prejudice last night, so all your goodies look perfectly at home to me! I love your little Shepherd's Bush finish. They are such sweet designs!!! Thank you for sharing the little lamb pictures. What a happy ramble you had.

Have a lovely day!

What lovely photos Barb, thanks so much for sharing. I love bluebells, they always remind me of my Grandma's house as she had wild ones growing in her garden.
Beautiful stitching too!

Thank you for the beautiful photos, love those bluebells!

Love your stitching and finishing, especially that cup of tea!

What beautiful stitchings! And thank you for sharing the photos of your country lane & all the sights it provides. Absolutely lovely!

What a lovely country walk. The lambs are cute. So is Ollie ^.^

Beautiful stitching too. Love how you've finished off the SB pillow. Nice progress on Mrs Darcy.

Beautiful countryside Barb, I do love Dorset. I have ny memories of Came Wood in the summer, walking over the bridleway to Bincombe.

Lovely stitching too, there are so many JA designs about we're spoilt for choice x x

Great to hear from you Barb. Your walk look lovely, the bluebells are in full swing here, and really beautiful this year.
I love the little cup of tea finish, I shall have to go an internet trawl and see if I can find the pattern.

PS did you get an email pattern a couple of weeks ago?

Poor Robin is just adorable Barb.
Love your cup of tea finish too and Mrs Darcy is looking great.
Thanks for sharing the lovely pics, DH was just talking about photographing some bluebells last week. They are such a gorgeous carpet of blue. Hugs!

I like that cute little Shepherd's Bush you stitched up and the cup of tea piece too!!!

A lovely post Barb, love your Pemberley china...and your SB finish is perfect. Great photos of your walk too xx

I enjoyed the lovely walk. Beautiful stitching! I really like the Shepherd's Bush piece! I'm happy to have found your blog. :)

Oh, how I love the pictures of your walk over the country lane. They are so very inviting and I can see that it's a delight to visit this countryside.
Your Mrs Darcy piece looks great, and so do the two little pillows.

Lovely update as ever Barb - I love dropping in to see what the mix will be. I don't "do" tea but love the cup that Martin ordered for you.
We've seen the odd bluebell this week while we've been away - there were even a couple of white & pink ones too. I know some people don't rate them but I like them.