So pleased you have come for a visit

It is always nice to have company and maybe have tea and cake too. Well it seems ages since I last wrote you, not going into why (boring), suffice to say , new painkillers and x rays taken may improve things. So as I said about the company and cakes ,here is my lovely sons offering to his mum on mothers day made with his own fair hands. 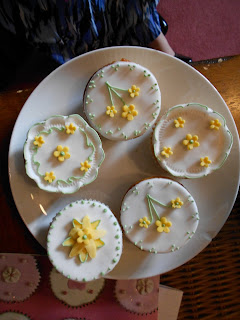 The not so delicate one was iced by Ella but she did very well.Well you lucky people here is a pic of me and said son. 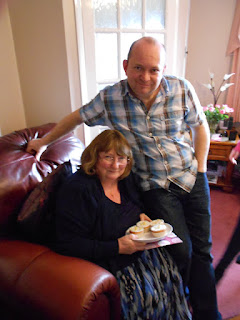 The day of our Sapphire Wedding Anniversary too and we were spoilt. Martin bought me a sapphire and diamond ring, to replace my engagement ring which is 47 years old and looking less sparkly than when it was bought for £10 many years ago. A lot of money in those days, I only earned £2.50 a week when I first started work at 15. I think Martin earned about £5 at that time.He also bought me earrings to match.Unfortunately the hands are not as nice as when he first bought a ring for that finger. After much deliberation and so on I eventually bought him a telescope for seeking stars ,planets and little green men etc. Kate gave us a rose bush named Champagne memories, and a bottle of Bombay Sapphire Gin. (which if you like gin is rather nice!!!) Graeme gave us Champagne. For Mothers Day Kate gave me a Mum in a million rose bush, and Graeme got me a rather nice scarf to go with the cakes. We went up to Graemes to have dinner with Sues Parents and her brother and sister in law. Just a quick look at the table , 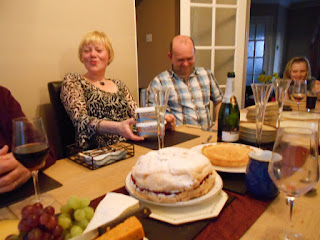 This was the pudding table. There was a chocolate cheesecake out of the pic too. Not sure what Sues expression is all about,I think she was taking the Lurpak tubs off the table, at the end of the table is Ella.Oh dear !were we full and it was a fabulous day ,good company ,good food and drink what more can you say. That morning Ella had netball and she had an award for the winning team in the area. 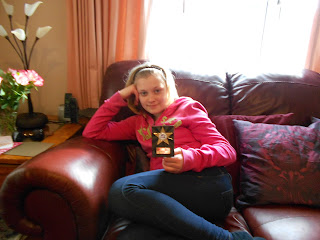 Well I think that is all family news this time. Alfie bear has not been well with Tonsillitis and a bad ear infection this week , so he has been off school. Jack biggest grandson has started driving lessons -that is scary when your grandson is learning to drive. Loves it apparently. Although talking of driving ,I have whilst writing this 2 fire engines about 8 police cars and a fire truck and 2 ambulances right outside our front wall. We are on the junction of 2 roads and apparently the car going out onto the Main road did not appear to have seen the red traffic light ,and a tremendous bang and screaming was heard by me sitting here.I am always in a quandary ,should I rush out( well as you know I cannot rush anywhere) and offer assistance not that I could do much or leave the powers that be to it. Mind you in a short space of time there were quite a few people doing the neck craning thing out there . The neighbours son was out washing his car in their drive and I saw him on his phone and walking past our gate as it happened he came in to tell me he had phoned the emergency services . The lady had hit a land rover ,think she was turning right (no right turn) and she hit the landrover which spun her round to be facing the right way. Fire brigade had to cut the 2 little girls out of the back. Just bumps and shock thankfully ,but the times it happens on this junction. 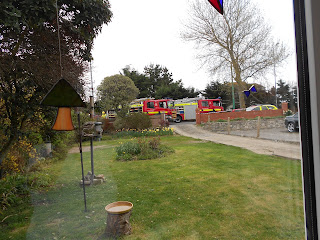 Still cars can be replaced but people cannot, so if you are driving out there please take care. Now onto some stitching ,not a lot but I can show you the Spring Exchange that I did on Needlecraft Haven. I had to stitch for Gillie and this is what I made, I used a design by Danybrod and stitched over one on 28count fabric . 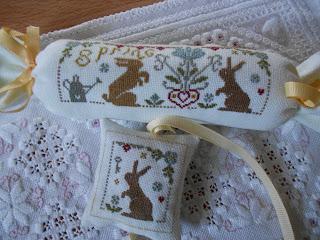 She was delighted and it was her first needleroll -hope I have not started something there Gillie. I will show you my lovely gift in a while. I have had another Shepherd Bush finish well 2 actually but one I cannot show you for quite a while. I found it was the only thing I really wanted to stitch on last week ,sorry Sally but just could not stick to the one SB night last week. Here is the Creepy Pincushion ,anyone want the chart. 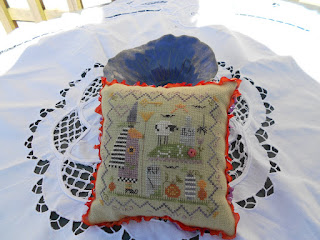 I did have a little bother trying to put that ribbon round the edge, the back I used some pumpkin coloured felt. 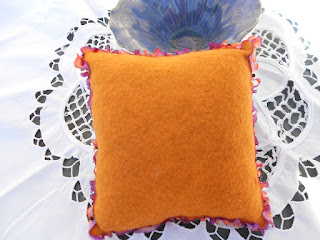 Now can you guess what this is 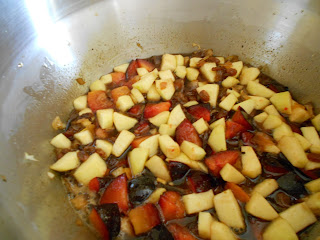 Martin and I decided we needed to make some more pickle as family have depleted the stocks so we set to yesterday to make some more here it is before the carrot and swede went in ,we now have 5 kilner jars of pickle fermenting in the dark cool cupboard. Ollie is off to vets for an op on Monday,so I shall be a jibbering wreck. the vet has decided after speaking to a specialist that he needs to be tested for a thyroid deficiency (the dog not the vet lol). Also he wants to take a piece of one of the cysts on his back feet to see if they can grow a culture. Megabucks I reckon on Monday shall I pass round a hat !! 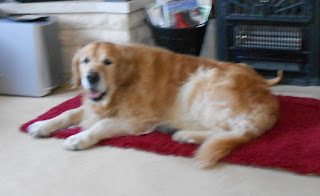 Well last but certainly not least this is what I received in Needlecraft Havens Spring Exchange from Maryq, Ihave taken a few for you to see but didn't she and I do well. 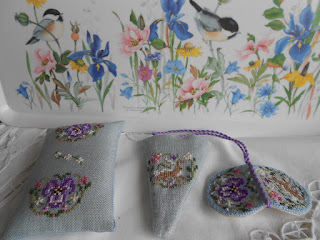 Mary said she based it on Bunny Hop by Just Nan. 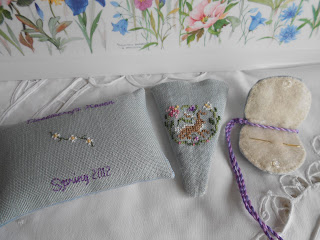 I do not think she reads my blog but you never know so thanks Mary it is gorgeous. Right folks I think that is about it. Oh I know what I have to do, I was awarded an Liebster award by Cath,and although I feel flattered to have it I am afraid I don't "do"awards so I shall not be passing it on.I do thankyou for thinking of me Cath and hope you will not be offended. I can never think of anything interesting to say about myself really. As you can all probably tell by this rambling that goes on here about the mundane things in life. So all of you out there who are kind enough to read my blog,and comment at times I will give you the Barbs award for sticking with me "you" are all great. Take care and until next time hugs n stuff Barb.x
at March 31, 2012

ohhhh gosh where to start mmmm cakes yum ... ring sounds fab :) goodies sound really nice too :)
well done on the netball award to the wee one :) use to love playing that :)
gorgeous stitching both given and received :)
and hope that something can be done for your junction...
and good luck to ollie too :)
love mouse xxxxxx

Love your Spring Exchange, they are gorgeous!

Happy Anniversary to you - stunning photos Barb thanks for sharing them. I adore your stitched pieces xx

Happy Anniversary and Mothers Day - looks like you had a great time. Lovely photos - thank you for sharing. Gorgeous stitching.

Glad you had such a lovely anniversary. There is some lovely stitching on display in this post, both exchange gifts are gorgeous

Glad you had a lovely anniversary.

Your SB finish is so cute! I don't mind you stitching extra nights. I promise I won't hold it against you lol.

Both the exchange gifts are lovely.

Barb, Congratulations on your wonderful anniversary. It looks like you all had a fantastic celebration. I'm glad you photographed the pudding table, it's by far my favourite. Those Mother's Day cakes look scrummy, what a talented and very thoughtful son you have and Ella's is obviously iced perfectly as I can see no difference in them :-) Congratulations to her and her team for winning the trophy!

I do hope the new meds make a difference and make you feel much better.

Your finishes are gorgeous. I love the SB Scary pincushion. The felt backing is perfect. I always struggle with backings and ribbon trims. Your looks wonderful. I have that kit gently but firmly working it's way up my to do list - which, disconcertingly, never seems to get any shorter!!

What a lovely Spring exchange. Both given and received gifts are really pretty.

Hope Ollie's tests results are good and it doesn't cost you too much but, having lost our gorgeous 15 year old collie, Shadow, last year and still missing her dreadfully, I know you'll agree that no amount is too much to keep them in good health!
Keep well, dear friend. Angela xx

Great news update Barb, you were deservedly spoilt by your family. The pudding tble looks amazing, room for one more next time?

I'm glad you enjoyed the Spring exchange - great gifts all round. We are a very talented bunh.

Hope all went well for Ollie today.
Beautiful spring exchange, there have been so man lovely goodiesxin this exchange.
Your SB is a cutie.
Super pic of you with your boy,and he certainly does make a beautiful little cake, I bet they were really tasty.
Take care, hope your results come through quickly and they show how you can be helped to ease the pains.

Glad you are feeling better. Some great pictures, yummy cakes and great stitching candy too xx