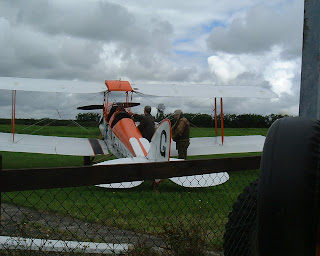 and the flying machine!
Well folks last Sunday was up into the wide blue yonder for Martin.It was slightly overcast when we set off for North Devon for Martins experience trip in his Tiger Moth. Which was a retirement present from his bosses.
I won't bore you with loads of pics , but he is the one in the flying jacket. Ollie and I watched with trepidation from the car as they rose into the air and disappeared from view. 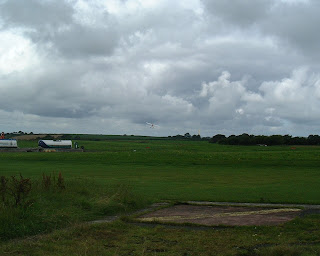 You can just about see him centre above the treeline.
45mins later I could hear an aircraft approaching and over the airfield . 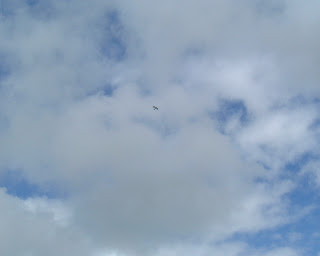 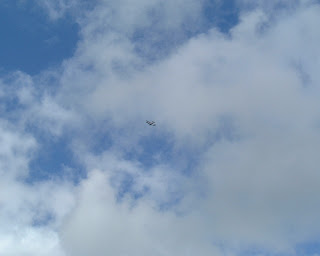 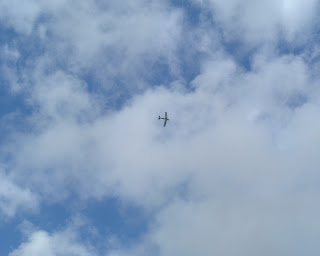 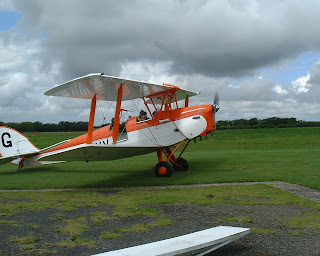 They climbed to about 14OO feet, to be able to dive and loop the loop . Then the landing on Terra firma. He thoroughly enjoyed it , and unbeknown to him they had a camera mounted on the plane which takes a DVD of the whole thing.
After leaving we tootled on to Dartmoor which was quite a way and then Ollie had a walk and an icecream! 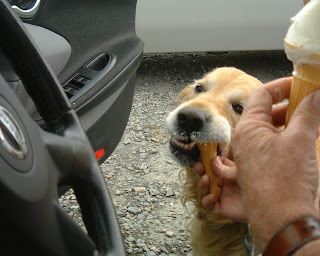 Well we all had an icecream as they are really good here. It is a have to when we come here. Also we had to have (or I did) a Dartmoor fix,can you guess what it was ?
We seek them here,we seek them there,they were in a hurry and I was not quick enough. 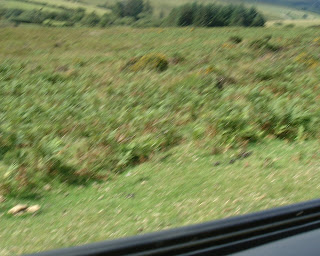 We had to stop in the road so they could go by and they were not going to stop for a photoshoot. 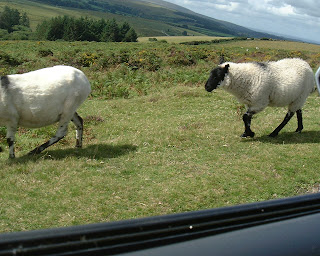 I think they then took pity on the sheepcrazed woman and let me take a pic. 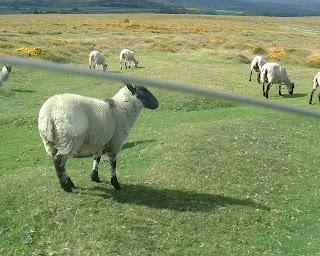 Satisfied I agreed we could make our way home now ,and that was our day,it was a lovely day out once I had got him back safely to ground.
Anyway I expect you out there would like some stitchy news. I have stash ,oh I know I shouldn't but I did get his permission.
Do you want stash or pics first. Hmmmm , I think I will save the finish until last.
Well I did say I really wanted these new SB ones just so I can continue on a Monday with Sally and Colleen , I am expecting Sally to visit and Colleen if she can get a flight!! I started My Moms Garden(which I altered to My mums Garden), last Monday. Sally will be having a new start soon I am sure, as she is going great guns on her "Family",Sally gets so much accomplished so quickly we are all in awe. Colleen has had an accident and broken 3 ribs poor girl, she blamed it on Miss W ,no news about Miss Wrigley though,hope you did not fall on her! I reckon she had been at the wine bottle!!! Seriously get better soon Colleen. I think she is still managing to stitch though, no ribs needed Colleen in stitching ,just fingers lol. 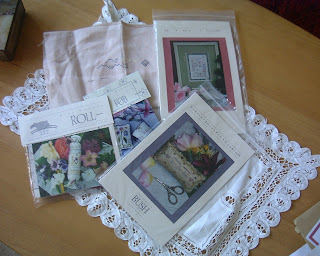 Just visible is the start I made , the rest is the stash I had.
Also in the post this week were LHN baked goods ,which I need to do next I think.With it came the crows a plenty. 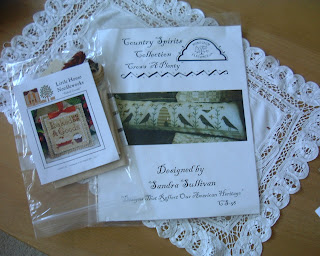 Still with me?
I also have been following Blissfullystitching blog, and Elizabeths progress. It is looking lovely and I thought as I have this chart, better get threads, especially since the amount goes down (if you did not know) from £18 TO £15 before paying duty,in November. Ridiculous isnt it.,that is if you are importing from the US.Anyway I ordered Vicci Claytons threads for this so another new start coming up. 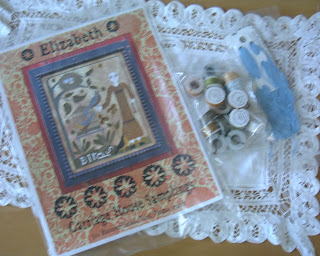 This week I ordered the threads for the Needle Charmer. So I have all I need now famous last words.
My friend Michelle was offering this chart on her blog as she has stitched it , and lo an behold it was in the post this week.Thanks Michelle. 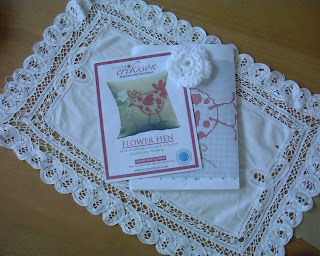 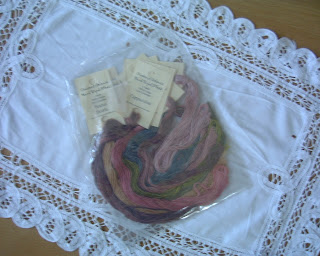 These are for another project I have in mind.I got them from The Patchwork Rabbit who is a lot cheaper for GAST ,WDW,and CC.
Ok of course an update on Mansfield Park by The Sampler Girl. 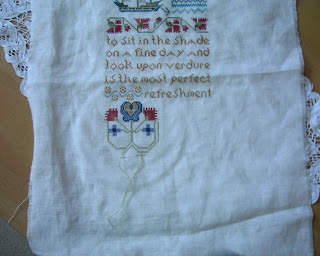 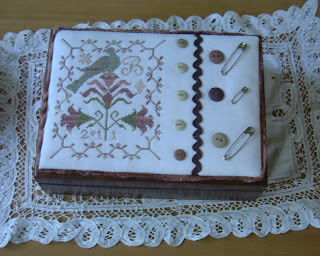 I finished this Blackbird Designs "Wild Lilies" and made it into a box top. The box was an old Twinings Tea Box, and I needed a box for my buttons. This is the inside. 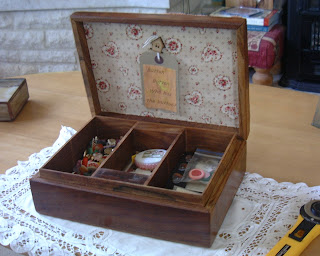 The label on the lid reads Button Button who has the button.
So I am hope you enjoyed reading the weeks "doings",and hope you have a good week ahead too. Oh before I go- when I have left a comment on someones blog,I sometimes have an e mail saying new comment on whoevers blog-can someone tell me how to do it.In very simple terms please (I am a very simple person.)
So now thanks for the comments and hello to the new followers ,take care all and happy stitching
hugs n stuff
Barb

Well done to Martin, and to you for patiently waiting for him to return..lol.
Lovely stitching too Barb, I like the box very much.
I had not heard that about the duty, I think I will be ordering from the UK more in the future!

Looks like hubby at a great time. Lovely new stash. Your box finish is gorgeous.

So glad that Martin had a great time. He is much braver than me as you wouldn't get me in one let alone off the ground!!!

Beautiful stitching. I love your box and I so envious of your new SBs!! Lovely start on My Mum's Garden.

Lots of other lovely new stash too:)

I did not know about the duty. Guess I better get some ordering in before November! Hope my stuff on Ebay sells lol!

Ollie looks like he's enjoying his icecream bless him:)

Fantastic photos of the sheep. I want one lol!!!

{{{Hugs}}} I will be there tonight with my FS. Hope Colleen can make it safely.

Looks like your husband had a great time - what lovely photos.

That was so sweet to buy your puppy an ice cream. I have a wonderful dog too and we spoil her. Your husbands retirement present is really something. What did he do for a living? Your new stash looks divine and I LOVE the box top. I have a box or teo I plan to do the same with. Also those sheep are beautiful.

I love your tea box - it looks wonderful. Enjoyed all the pictures you posted too. I hope I am understanding your question properly - to get the follow-up comments, underneath where you would leave your comment on someone's blog, there is usually a little place where you can tick the box next to where it says "Email followup comments to" (then it gives your email address). Then any time someone posts a comment on a blog you have also commented on, you will get a notification.

Looks like all three of you had a great day out.
Wow, what wonderful new stash you've got, I'm drooling allover my keyboard with those new SB's lol.
Thanks for the heads up about the change in the limit for import duty, yet another way to take more of our money off of us it seems.

Hi Sweetie, please tell Martin anyone that flies & loops & all that sort of thing, are magnificent!!! I would have been sitting with you & Ollie...safely on the ground. What a delight for Martin!! LOVE, the sheepies!! Next Monday for SB SAL with you & Sally, maybe I could sneak one sheepie back on the flight home?!!
What a stash! OMG, girl. Great selection!! Now I don't feel so guilty on the stash I've been accumulating lately. I have to post pics. Love all your stitching and the Tea box is outstanding, oh how I love it.
Miss Wrigley saw Ollie's ice cream picture and that's all she barks and bays about...Speaking of Miss Wrigley, she did not suffer any injuries when I fell & broke my ribs. I broke the ribs because I tried very hard not to fall on her; so, I opted to fall on the concrete instead. Oh what we do for our sweet furballs!
Super post Barb & your pictures are fabulous!
{{{Hugs to you, Ollie & Martin}}}

A super pic of Martin and his flight, what a memeory for him to have.

Ollie looks like he enjoyed his day out too.

Nice new stash, that should keep you busy for a week or two.

The box is stunning, you are so clever