Red roses from a blue lady 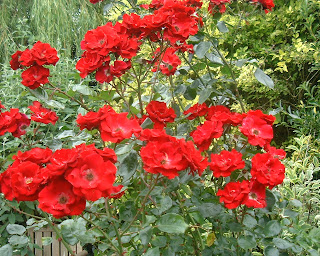 Sorry, I know it's for a blue lady but thought I would change the title to a more apt one.

I am also sorry it has been a while since I last wrote and today it may be a gobbledegook as I am on my 'stupid' pills. The pain has kicked in big time and I sent Martin off to his archeology dig today feeling very much under the weather and he felt awful leaving me. Much talking to from dd, has me on the meds again ,which I admit to having dulled the pain a little. So here I am trying to spell and talk sense so if it all goes awry you will understand why.
At least I can sit and watch Wimbledon next week if it all gets too much. Hang it I shall watch it anyway lol!!!
Well I now have a other half at home (most of the time) he retired a couple of weeks ago . He is like a fish out of water poor thing and I think it will take a bit of adjusting to. 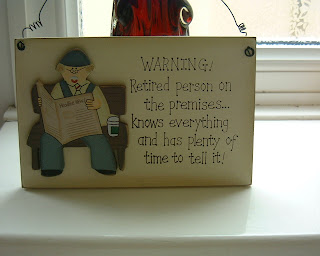 You may remember that we were off to the dogs for his leaving 'do' , I missed out as I went down with a tummy bug and really couldn't contemplate having to sit in a limo drinking Champagne with his bosses and their wives. Felt awful not supporting him ,but the children were waiting there for him when he got there, so he had some family there for him. He had a lovely night (apart from one incident which I will not go into here) one of the gifts they gave him, was an experience day ,he is torn between going for a flight in a Tiger Moth (his era !!! well almost) apparently they dress you like Biggles,THAT I would like to see. Or the other one he quite fancied was a balloon flight. So when it happens I shall hope to get pics so I can show you.
We drove up to Graemes last Sunday for fathers day dinner , we had a lovely day with them and in the afternoon we went for a walk along another part of the river. The afternoon was warm and birds were chirping away, don't know if they were swallows or swifts but they were darting about over the meadows. We had to cross like a suspension bridge, only not as big , but I hated the sensation of swaying over water with space between the planks. Graeme was hoping to find a Geocache or two and did, we walked quite a long way (for me) and when we got back to the bridge I thought I would not be able to climb the 2 high steps onto it. I shall show some pics if they don't frighten you too much . I am the short dumpy one!!! at the back and with Sue. 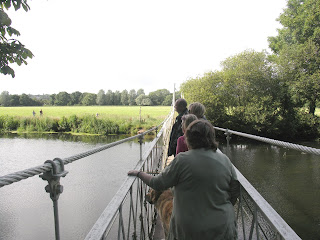 How did I dare show you that, I was in green not that awful colour of drab beige. Ella snaffled Ollie to walk and here they are Ollie not feeling too good, he looks an old dog now. We have had major problems with him this week due to a reaction with new meds at £230 a month these for his feet, and his epilesy pills ,we thought at one point we would be losing him as it caused him to have symptoms of an overdose . Even the vet was concerned and has been phoning us for updates. We had to stop the new ones and cut back on his normal ones. He is a lot better but still has muscle weakness and is not eating very well. Vet wants to try him on half dose of the new meds when he has recovered but I am a bit wary.His feet are so bad though ,what are we to do . 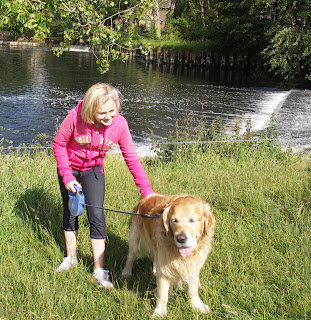 I did have a lovely present from Martin to mark His retirement and here she is. 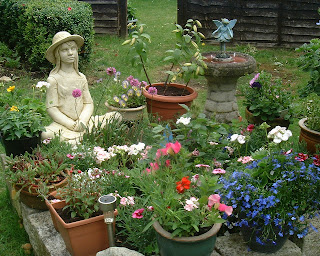 I have named her Emily do you think it suits her. She looks rather pensive watching over my 'Mums'little patch.
Not much in the way of stitchy news as pain has been stopping me stitching, in fact the last 2 days I have done not one little x. Getting really frustrated. Anyway let me update you on the SB French Heart , hopefully if I can get my fingers to work for any length of time this may be finished in a couple of weeks. 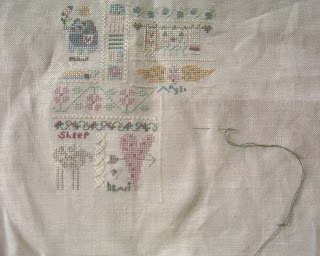 You will have to excuse the rumpled look of the fabby as I didn't get to press it before taking photo for you.Click on it to see detail. Sally, hopefully I shall join you and Colleen tomorrow, it all depends on EB who is staying over as teachers have training days and G & S are working. Also depending on the wretched pills.
Another one is the TSG Mansfield Park that I am doing . This week I am hoping to get some sails on my boat then I shall sail away into the wide blue yonder. 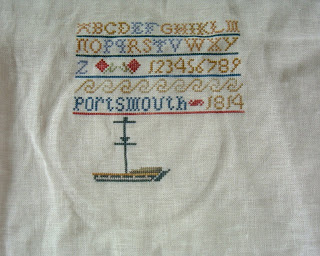 A couple of Blackbird designs came this week and I have succumbed to ordering the new Loose feather designs that are being brought out . They look really pretty and I just could not resist ,also ordered Dandy Dreams as I think it may be good to stitch for grandchildren. So now have to watch those pennies.I was going through the stash the other day omg , just so much and I shall never have time to stitch it all.
These blogs and designers have a lot to answer for. 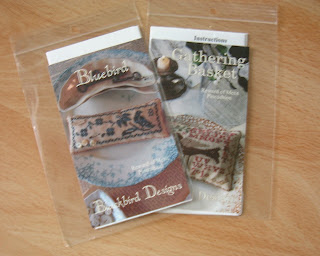 I mentioned Martin was off on a dig today ,they are digging a site on Portland and hoping it may be of Saxon origin, he is taking Ella tomorrow. Wonder what she will think of that? He took a little something to G&S last week, he did some glass fusion and made this. 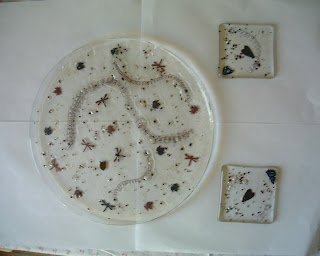 I think they would like another 4 coasters.
Well dears I think I shall now have to go and get some medication or dd will be on my case and it is feeling as if I need another boost of the ditzy pills.So until next time ,when I hope to have more to show you,take great care of yourselves and yours
Hugs n stuff
Barb.x
at June 26, 2011

Oh good heavens Barb, hoping you get back to feeling yourself & pain leaves, SOON. Congrats to Martin on his new phase in life. Love pictures of you, family & Ollie.
SB stitching is awesome, oh how lovely the colors. I too hope to stitch with you and Sally, Monday evening. Mom has not been doing well, even had a visit to the emergency at the hospital. I have not been stitching much at all between work & my Mom's declining health.
Big {{{Hugs}}} to you, my dear. Get better Soon!!
Colleen

Oh sweetie, you have been thought of! Me and Tina were wondering how you were and here you are! Sorry you are not too good. Lovely pics of your walk. So nice to see you - if only a little. Lovely stitching and stash. I have the blue bird one. Take care. xx

Hope you're feeling much better soon Barb and your poor dog too.

Lovely finishes and wip's. I love your Emily, she could be from the Jane Austen era.

It's great to see a blog post from you Barb, lovely pics, especially nice to see some of you.
Your SB is beautiful, such lovely detail and such a pretty colour palette. Nice new stash too.
So sorry to hear that the pain is bad at the moment, hope the meds help and it settles down soon. Take care of yourself and enjoy the tennis. Hope Ollie is better soon too.

Lovely to hear from you Barb. I'm sorry that you have been suffering and hope you feel better soon.
Your SB is so pretty and delicate, great new stash too.

Barb,
I'm sorry you are feeling so unwell. I hope the medication sorts things out and you begin to feel better soon.
I get the feeling Martin is not going to ever get bored, he has some exciting things lined up. I love Emily and think she looks perfect in your mum's patch.
What a lovely way to spend Father's Day. Occasionally it's good to challenge ourselves - only very occasionally, though! I 'm not a lover of swaying bridges either.
Lovely progress on SB French heart. Hope you get to stitch your sails on Mansfield park. My TSG Persusion piece is finally taking off now I can spend every Wednesday on it :-)
Get well soon to you and Ollie.
Angela xx

Sorry to hear you are not feeling well! I understand that pain keeps you from things as I too well know.

I love the glass fusion that Martin's done. I am watching the reruns of Kirstie's Homemade Home and she did a bowl that was to die for. I love her show and hope another season will be coming.

Life is busy here trying to get 14 surprise gifts made before next week. I have my annual Christmas in July quilt evening. When that is past, I can relax and things can get back to normal. Humm...what was normal??? Lol.

{{big hug}}, i'm sorry you have had to resort to the yeucky pills again, i hope they work their magic quickly for you and you are soon feeling the benefit

Emily is lovely, a nice pressie from hubby and i do love the retirement sign, that did make me smile.

Awww Barb, gentle hugs from me coming to you. I'm so sorry you've been under the weather. I hope the ditzy pills work their magic quickly, bless you. Give Ollie a gentle hug from me too please.

Lovely stitching as always. Your French Heart is beautiful.

What lovely photos of your garden and Emily sitting perfectly among the flowers. My best thoughts are coming over for you and for Ollie -hope you both feel much better soon. The stitching you've done is lovely, so hope soon you'll get on with finishing those pieces and on to the coming ones! Take care and be well!

Lovely WIPs wow its not often you find a creative husband & wife team!