Oh the weather outside is frightful!

No !no snow,rain rain and more rain. Ollie is going to have to have wellies, the way we are going. Martin bought some new wellies today as the fields where ollie goes for walks (see pic on header) is like a quagmire at the moment.I must admit that I like it cold and crisp and oh I remember the winters when Jack Frost visited and we had ice in as well as out. They don't make winter like they used to!!!.We don't get snow very often as soon as it is here, its gone in a few days. As the song says it is fine if you have no place to go.The header was taken early this year.

Update on limping dog- hmm expensive limp ,£180 for x-rays and meds, however he is now back to his normal self. Hated the lead walking for short walks. He loves meeting his friends in the fields for a run and a catch up !!
He has a friend called Bart who is a great dane, no matter where he is in the fields ,Ollie seems to sense he is there and he is gone. Martin usually catches up with them playing a bit further on. Oh spoilt dog of mine.

I also searched in the dusty cupboard for the clever head, found panic head (that time of year), Cooking head (did lamb shanks in red wine this week) and knitting head (started some socks for DH). However did not find clever head,or the memory that seems to have gone missing with it.


Family news since last time ,is that Caitlin is now 12,(it seems like yesterday that I was with Kate when she was born , Kate convinced it was another boy, first words were "oh it is a pink" delight) that happened on Tuesday,lots of singing going on mainly happy birthday from her 2 little brothers ,but Sam gave us a rendition of his shepherds song he is doing for the nativity at school ,he is 7.Alfie who is 2 is to be a shepherd (what is this thing about sheep! ) Kate our daughter says how on earth she is going to get him to dress up is beyond her ,as at the moment she has a job getting him out of his pjs,he would wear them all time if he had a choice. Pic shows Caitlin looking mighty fed up as she couldn't remember her password for her grandad to to download i tunes from his computer. Jack is 15 tomorrow and is getting so tall he is almost 6ft now and still growing. He will be able to get up that beanstalk no probs.Pic of Jack and Sam taken 3 weeks ago when they came to stay. 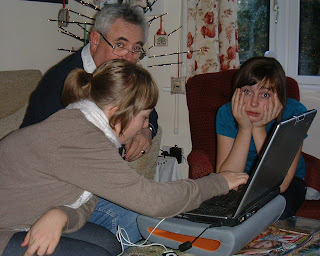 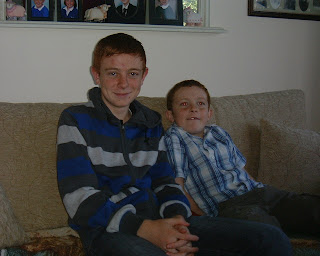 Now the moment you have all been waiting for. Stitchy news.

Yesterday the postman arrived, and I almost snatched his arm off as he gave me my Thread Bear order. OH YUMMY CHARTS, more of those later.Hee hee keeping you in suspenders.I also was handed another package ,he had tried to get them through the letter box and this one wasn't playing nice so he had to ring the bell.
Puzzled I thought maybe it was something I had ordered ,but no ,there was a name on the back I recognised Barbara B from the Stitch and Stash forum. Tore it open ,(no standing on ceremony here) and inside was a red envelope,and a lovely little red box. Upon opening it was filled with red tissue paper. Do you want to know what was in it,do you ,do you lol 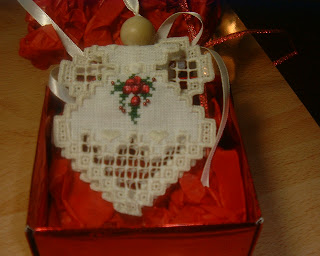 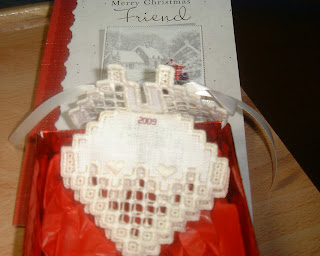 I had admired the ones she had done for her grandchildrens christening and joking had said should I put my order in then.
I never suspected , the time and effort that must go into these perfect little creations that this kind lady would send one to me! She is now atop the ornie tree,the angel, not Barbara!She had even put the year under her wings. Thankyou so much Barbara again. I did say I was going to post it here.

Then today it was reveal day for the mail art.Some people havent received theirs yet but I did a couple of weeks ago and this is Elisas to me. 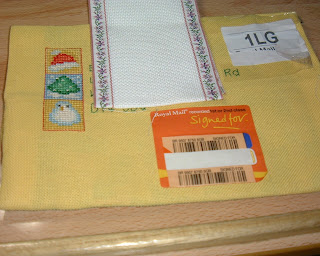 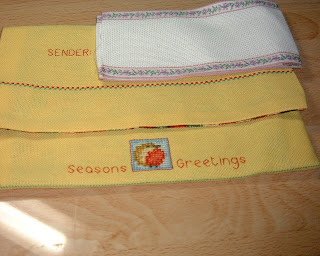 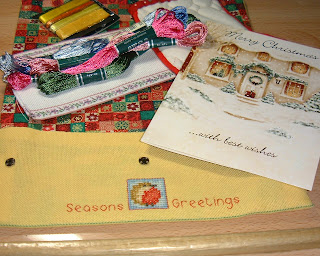 The last one is the goodies Elisa sent .Thanks so much Elisa if you read this.

This is my mail art that I sent to Lynda 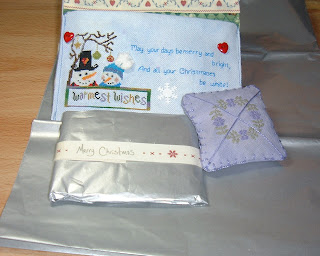 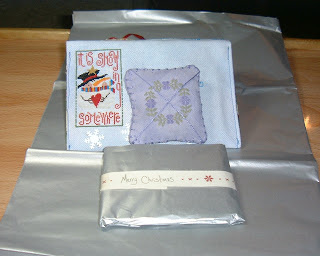 These were a Barbara Ana and Helga Mandl designs. Done on fabric dyed by Jayne of Jaynes Attic.
Another little was the monthly challenge Peace by Elizabeth Designs a freebie. I did this on a little handmade paper notebook. 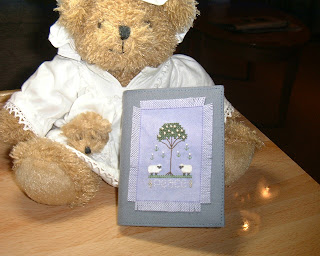 Then:- (is it never ending), I made this little cushion and sent it with some goodies to my Irish friend Anne for her birthday today. Forgot to take pic so she has kindly sent me one so you can see. 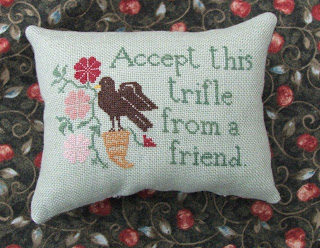 More stitching has been done but I cannot show that yet.

Now going back to the stitching yummies I had from Thread bear, apologies ,battery has failed on camera so it will have to wait until next time. Also I have done a christmas ornie for an exchange and deleted it by mistake (rats) so hopefully will show you one from the recipient when she gets it.

Last, but certainly not least, thankyou so much for your comments they mean a lot and I hope I have given you a little enjoyment. I have felt a little easier doing this this time ,so if you have managed to make sense of my rambling,I WILL BE BACK.
One more pic for you to see the ornament tree.Speak soon hugs Barb. 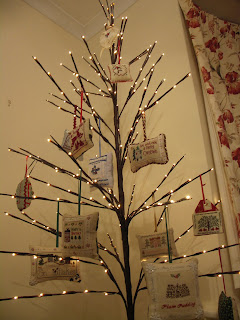 Lots of nice piccies in this post, i love Ollies header pic, that would make a stunning xmas card pic to your friends.

Love the ornie tree, and the gift from Barbara is splendid

The mail art seems to have been a great success.

Great stitching Barb, and it was nice to see pics of your family.
Your Stitched Ornament Tree looks fantastic

Great post Barb - lovely pics and the stitched ornament tree is great. I have a tree like that one and I am now inspired to have an ornament tree by next Christmas!

Gorgeous stitchign and very impressed with royal mail for delivering the mail art - I didnt think they would! Love the stitching tree. x

What lovely pictures of your family and stitching.
I do love your ornie tree, and what a super angel,I think I may have that design somewhere

Thanks for stopping by my blog and becoming a follower...I have done the same with yours. I think we will be enjoying a lot of cuppas together ;) I entered you in my giveaway.

Like the new look background. Lots of fab pics again Barb, too. You have a lovely family. All those stitched pieces are gorgeous & I love the stitchy tree. :0)

What a great Blog you have Barb ! I love the photo's and the stitching goodies, and Ollie looks gorgeous. I do miss our Daisy :(.

Hope you all have a wonderful Christmas xxxx